Self Concept Essay: Self-concept refers to how a person thinks about, evaluates, and perceives themselves. It is a concept of being aware of oneself or having a concept of oneself. It is considered a person’s belief about oneself and the person’s attributes about what they think about oneself.

The self-concept embodies the answer to “Who am I? It is the extent to which self-knowledge is defined. It applies to a person’s attitudes and dispositions.

Long Essay on Self Concept 500 Words in English

According to Burns, in 1982, “self concept is an image which an individual has of themselves.” Conceptualization and its process form its origin. Self-concept is an important aspect of life because it molds our thinking process and how we act and behave in our everyday life. It is one primary effect that impacts managerial thinking. It has a powerful influence on one of the many behaviours.

The self-concept has three components, which are self-image, ideal self, and self-esteem. Self-image is how the person sees oneself. Self-esteem is how much the person values themselves, and the ideal self is how the person wishes himself to be. The concept of one’s self is active, dynamic, and malleable. The self-concept can be influenced by surrounding social situations and even if a person tends to motivate themselves.

With age, people tend to grow in knowledge, skills, and awareness about themselves. This consciousness is called self. It is the reflection of one’s own identity as an individual, as a person. There are various ways in which a person thinks about themselves. Self-concept is the thinking aspect of oneself. It forms a primary part of the personality and reflects many personality traits in a person.

It is a mental image that a person has about his strengths and weaknesses. These are the set of opinions, attitudes, and cognitions that an individual has on themselves. The self-concept can be distinguished from self-awareness. It is the extent to which self-knowledge can be defined.

The concept of oneself is considered malleable when a person is at his younger age and is still going through the process of discovering his habits, behaviours, likes, and dislikes. With age, perceptions become more organized and detailed. They form a better idea of what they want to become and what is most important for them. 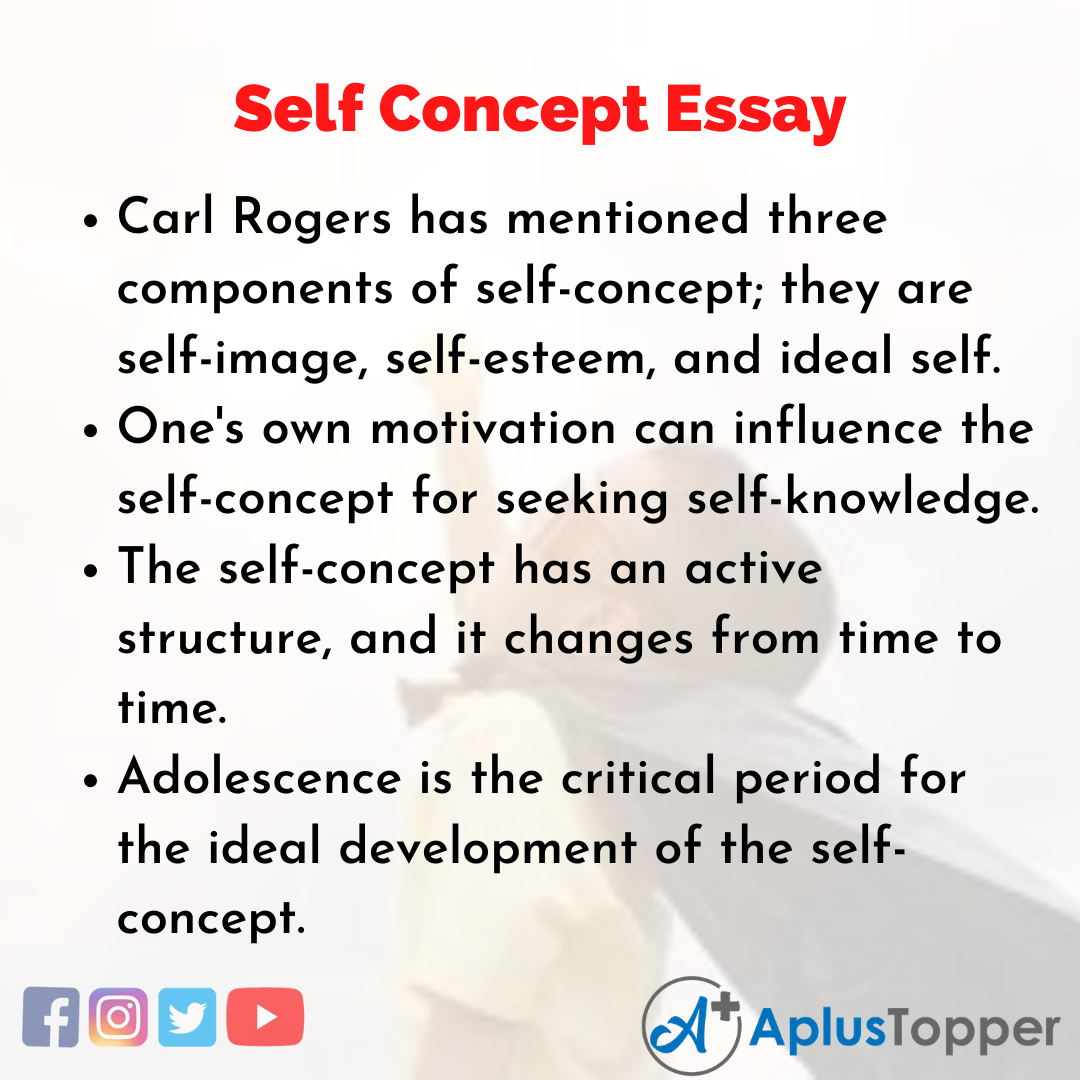 Short Essay on Self Concept 150 Words in English

Self-concept is the personal knowledge of an individual about who they are, how they are encompassing all their thoughts and feelings. It includes knowledge about how a person behaves, their capabilities, and their characteristics.

The self-concept of an individual develops rapidly during a person’s childhood and adolescence. It tends to take shape, and further changes as a person learn more about themselves. The self-concept should be understood by the structure of awareness and knowledge. People pay attention to themselves and notice both their internal states as well as external behaviours.

People collect information regarding themselves and based on this information, the concept of one’s self tends to build up, and people expand their ideas about who they are. Self-concept is not a single unitary concept; it is dynamic and is impacted by both the individual and society. Self-approval can contribute to greater success in an individual if he or she accepts themselves as they are.

10 Lines on Self Concept Essay in English 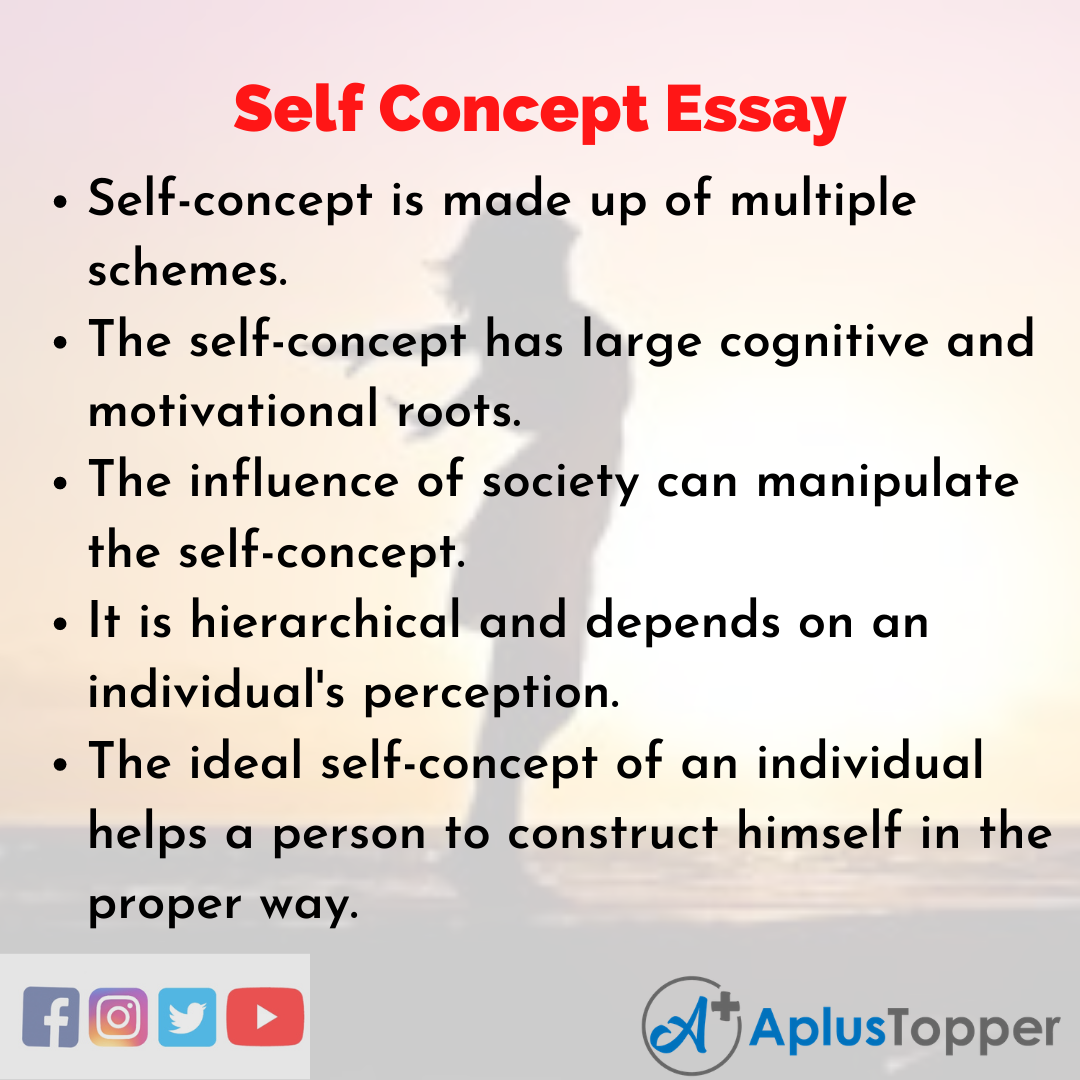 FAQ’s on Self Concept Essay

Answer:
There are various factors in which a person’s academic performance depends. The self-concept can influence the performance to a certain extent.

Question 2.
Does the Self-concept have any influence on self-confidence?

Answer:
Yes, it does. If one has a good perspective about oneself, it will have an advantage in a person’s self-confidence.

Answer:
The factors are age, gender, and religion, along with self-esteem and self-image.

Question 4.
Who created the self-concept?