Science and Religion Essay: Science is the logical approach to analyze the physical and natural world through observation and experimentation.

Religion is the emotionally set belief in the worship of a divine controlling power often said to deliver salvation. Science and religion contradict each other but are both necessary to humankind in their individual ways.

We provide students with essay samples on long science and religion essay of 500 words and a short essay of 150 words on the same topic for reference.

Long Essay on Science and Religion 500 Words in English

When people lack an understanding of natural causes, they assert supernatural explanations for them. In the scientific study of religion, historians attempted to provide naturalistic explanations after observing human behaviour and culture, for areas such as religion. In past religion has often been a hindrance in the path of science and evolution. Religious leaders, being stuck to their ego, refusing to believe in scientific discoveries such as the revolution of Earth around the sun, was simply because their beliefs were brought into question and challenged. Being afraid of the cruel punishments from the Pope, Leonardo Da Vinci, had to leave their country after dissecting deceased human body for depth in anatomy. Stories like this bring to light how religion, being previously recognized, refused to accept a theory that had a scientific origin and contradicted theirs. However, as long as a religion gives people hope and does not get in the way of science, it is necessary for humankind.

In this sense, science and religion are complementary. But, with the advancement of material science, the use of it as a weapon to harm human life has added to its inconvenience. The study, invention and usage of nuclear bombs, hydrogen bombs and other lethal weapons, were started when enraged international political forces commanded science during World Wars 1 and 2. Many innocent lives were sacrificed due to such scientific application, and people had nowhere to turn for peace but to their Gods.

Science is very necessary to humans and their development, and thus if it can be used without evil intentions, it is something that can take humankind forward. The insights and skills generated by scientific advance will always have to look to a spiritual and moral commitment to ensure their correct application. Likewise, religious convictions must willingly submit to impartial testing by scientific methods, no matter how cherished they might be.

Both science and religion are bent upon discovering greater forces, knowledge, wisdom and understanding the universe. Hence there appears to be quite a few core beliefs held by both the ideologies simultaneously. People have dreams, and to fulfil them, they will move forward no matter what. Neither the roar of science nor religion will stop them, and thus science and religion, the two potent sources of human life need to reconcile and cooperate and harmoniously help people attain their goals. 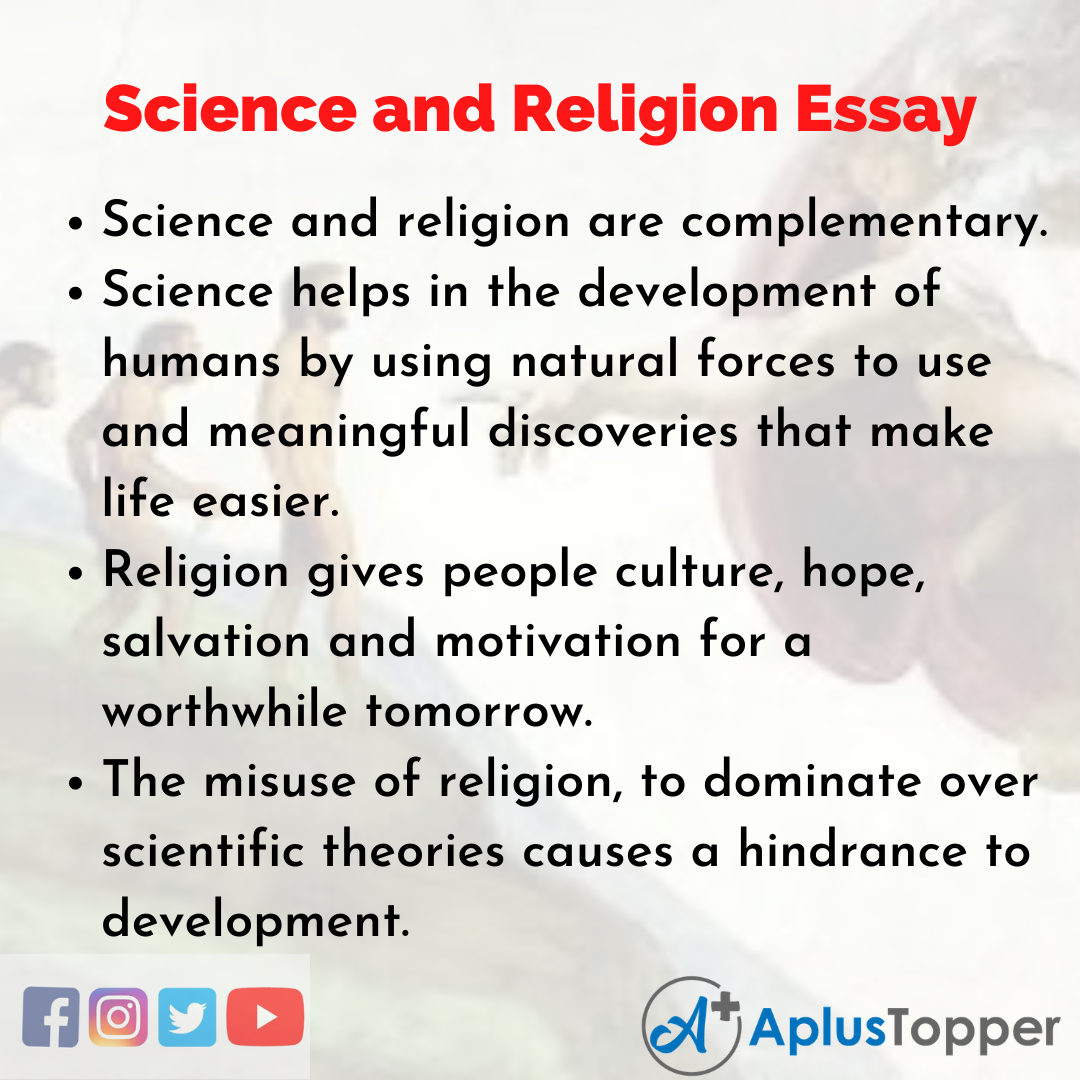 Short Essay on Science and Religion 150 Words in English

Today’s world is greatly dependent on both science and religion. Science gives humans the power of nature, to manipulate, discover and put into use. At the same time, religion develops in people the belief of divine power and an instinct to work on the spiritual mysteries of the world.

Religion is ancient to science, and with the development of scientific theories, there has been a battle of dominance between them. Instances where religion caused a hindrance to scientific theories being established and where science was misused to take lives and people had nowhere to go, but their religion is ironic but common. But, science and religion are closely connected in the scientific study of religion which can be traced back to the seventeenth century natural histories of religion.

Science and religion can cooperate to establish a harmonious mutualistic relation that can help humankind. Scientific advancement leads to evolution and a better understanding of life, while religion gives people hope and pushes them to work harder towards their goals.

10 Lines on Science and Religion in English 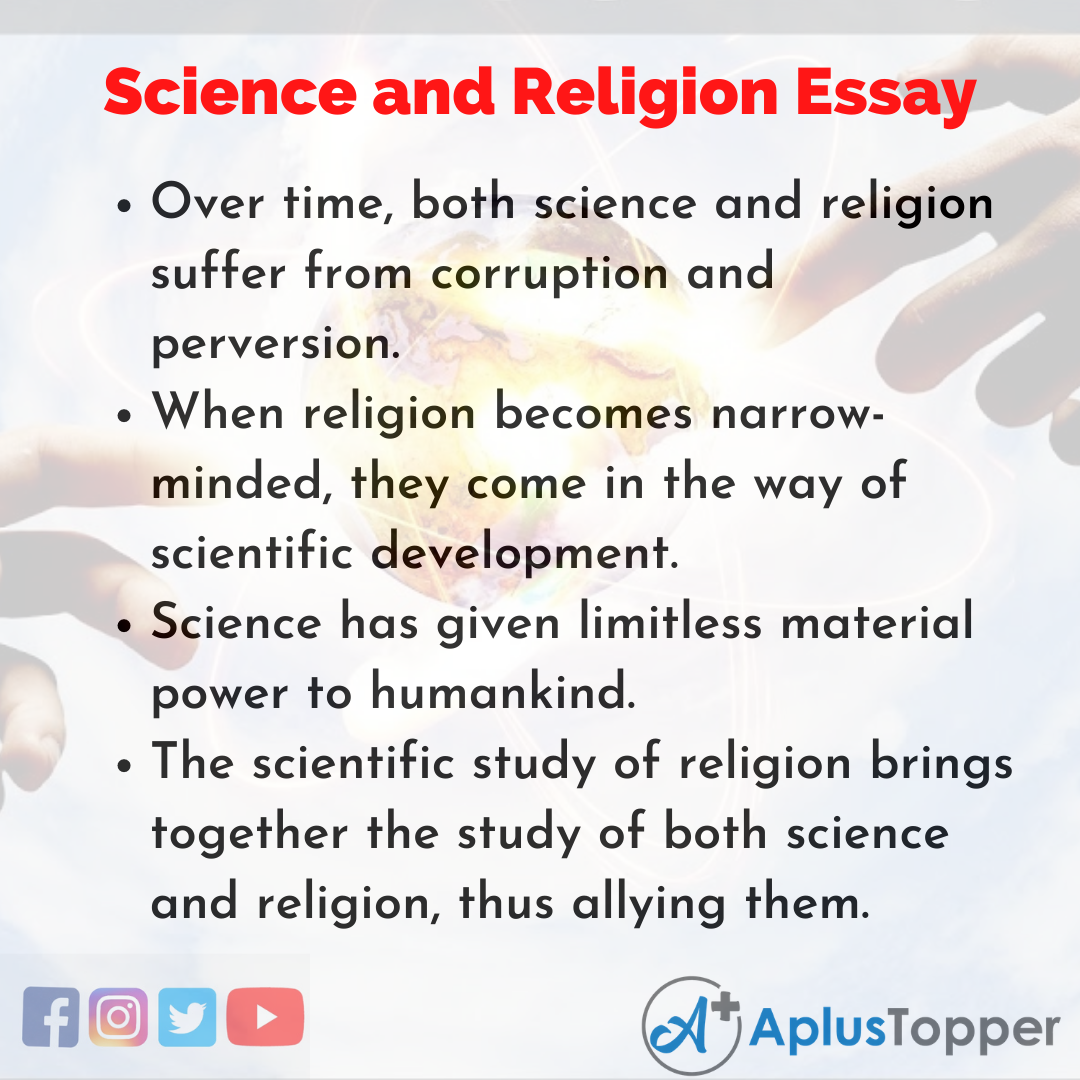 FAQ’s on Science and Religion Essay

Question 1.
Is religion learned from science?

Answer:
Yes, religion is learned from science; in the same way, it will contribute to the goals it has set up.

Question 2.
Is religion older than science?

Answer:
Yes, religion is an older practice than science.

Question 3.
What do scientists believe about religion?

Answer:
Scientists rightly believed that science and religion are complementary as well as supplementary. Science is not the key to the whole mystery of life, and thus some part of the divine paradox is left for a supernatural hypothesis.