Statisticians and quality control technicians gather data to determine correlations (relationships) between such events. Scatter plots will often show at a glance whether a relationship exists between two sets of data.

Let’s decide if studying longer will affect Regents grades based upon a specific set of data. Given the data below, a scatter plot has been prepared to represent the data. Remember when making a scatter plot, do NOT connect the dots. 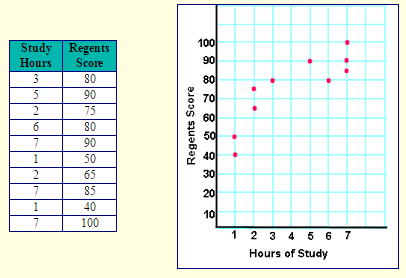 The data displayed on the graph resembles a line rising from left to right. Since the slope of the line is positive, there is a positive correlation between the two sets of data. This means that according to this set of data, the longer I study, the better grade I will get on my Regents examination.

If the slope of the line had been negative (falling from left to right), a negative correlation would exist since the slope of the line would have been negative. Under a negative correlation, the longer I study, the worse grade I would get on my Regents examination. YEEK!!
If the plot on the graph is scattered in such a way that it does not approximate a line (it does not appear to rise or fall), there is no correlation between the sets of data. No correlation means that the data just doesn’t show if studying longer has any affect on Regents examination scores.

Check out these graphs for visual interpretations of types of correlations: 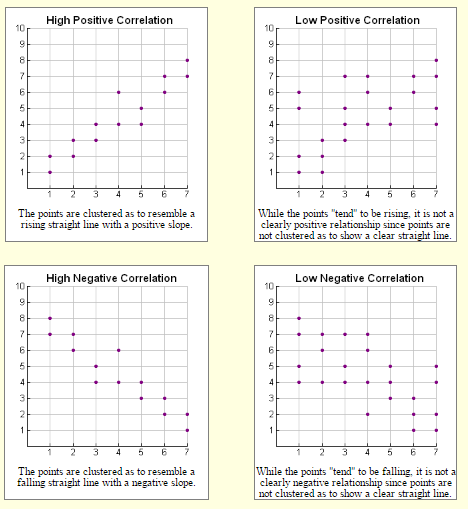 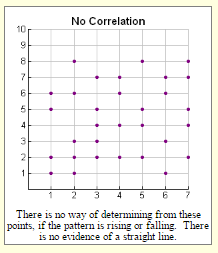 During the months of February and March, the weekly number of jars of strawberry jam sold at a local market in New York was recorded. For the same time frame, the number of copies of a popular classical music CD sold in Florida was recorded. The data was examined and was plotted

From looking at the graph, it can be seen that there is a high positive correlation between these two sets of data.

So, this must mean that the number of jars of strawberry jam sold in New York was causing an increase in the number of classical music CDs sold in Florida. Of course this is not true!

Always be careful what you infer from your statistical analyses. Be sure the relationship makes sense. Also keep in mind that other factors may be involved in a cause-effect relationship. 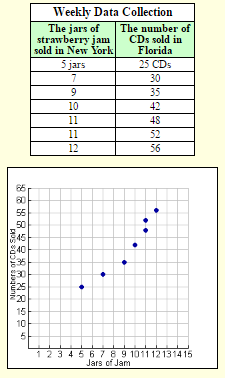