Essay on Save Girl Child: Today the women are in fierce competition with the male population, especially in India. Girls are attaining tops in every department and proving gender imbalance wrong. International Day of the Girl Child will be celebrated on 11th October every year.

Long And Short Essay On Save Girl Child In English

After looking at weak statistics of the girls in the nation, Prime Minister Narendra Modi began the Beti Bachao Beti Padhao Scheme. This is a very powerful action project, which points to developing the health, safety, education of girls and the abolition of female feticide. Also, this scheme focusses on the personal and professional development of girls.

This project was executed in 100 selected cities in India by a national campaign to perform it in all the States and Union Territories. The good fact of this scheme is it will prove to be a big step to eliminate crime and the wrong practice against girls. With the help of this scheme we can hope that in the future, due to social and economic causes, no girl-child or female fetus will be killed in the mother’s womb. Consequently, by abolishing gender discrimination everywhere in the country, the daughter-saving daughter-education scheme is beamed at obtaining the girl’s sovereign of both economic and social.

The mindset of the people has grown so corrupt in our country that they even don’t consider respecting women. Swami Vivekanand Ji stated that the nation where women are not respected, that country can never progress! Hence, people in India first learn to respect women and girls.

“Girls are the Spirit of our Nations Save Them” 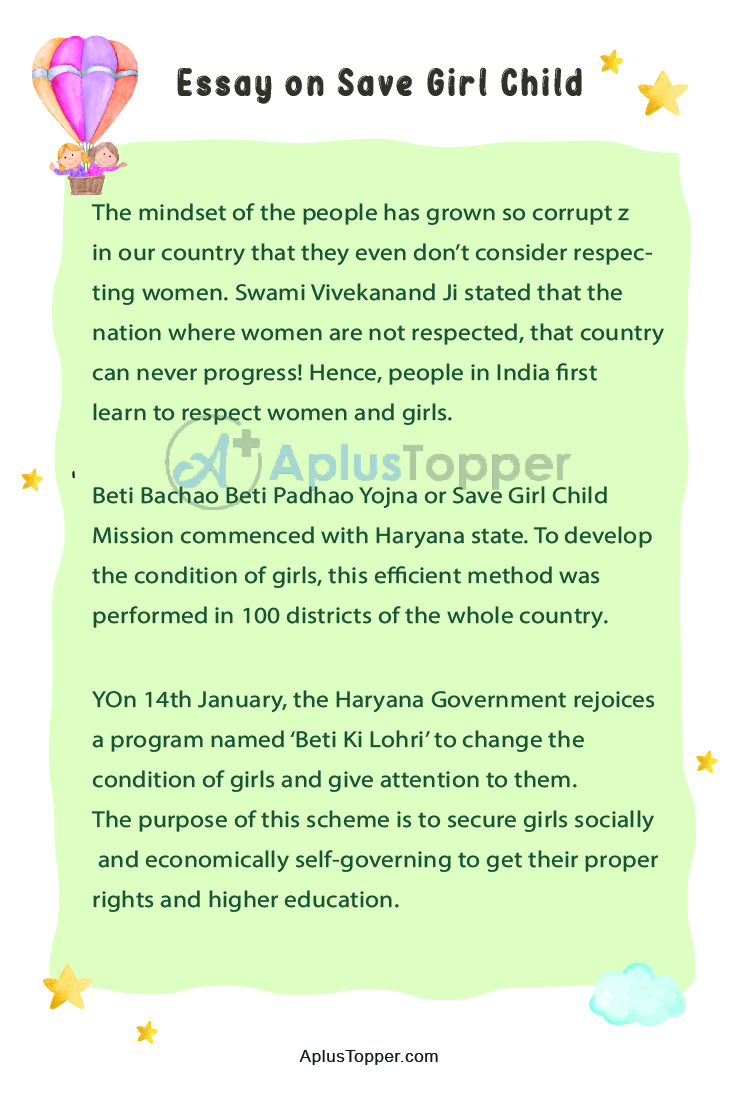 Beti Bachao Beti Padhao Yojna or Save Girl Child Mission commenced with Haryana state. To develop the condition of girls, this efficient method was performed in 100 districts of the whole country. Due to the low female-male proportion, 12 districts of Haryana had been chosen, in which (Ambala, Kurukshetra, Rewari, Bhiwani, Sonipat, Jhajjar, Rohtak, Mahendragarh, Karnal, Yamunanagar, Panipat and Kaithal) were important districts.

On 14th January, the Haryana Government rejoices a program named ‘Beti Ki Lohri’ to change the condition of girls and give attention to them. The purpose of this scheme is to secure girls socially and economically self-governing to get their proper rights and higher education.

The count of the number of girls has been continuously decreasing for many years in India, which can cause huge problems. It will result in a reduction in the development of the human race. Advanced diagnostics in hospitals can determine the gender by the instrument, which has led to a considerable drop in the number of girls as a child is being killed inside the womb. This dangerous practice has come into presence only because of gender bias in society.

Here are some of the important actions to be taken under Beti Bachao Beti Padhao Scheme:

Our country is regarded as a land of mythological history and religion and kindness and love. But as the Indian has commenced advancement and developed new systems, there has been a huge change in the mindset of the people. Due to this transition, there is a tremendous outbreak due to the population.

People’s mindset has grown so bad that they started to distinguish between sons and daughters. Girls have been understood as material or stranger person but not as a daughter of own house. Such kind of people are happy and celebrate the birth of a son when they are blessed with a daughter, the complete house is in silence or grief. They even mourn for the birth of a girl child. Many cases have been found in our country that the newly born girl child has been dumped in an unwanted and stranger place. Also, sometimes they have been admitted to the orphanage, though their parents still exist on the earth.

Therefore, the Government of India should plan strict laws for the security of girls so that no one should attempt to abuse girls and discriminate against them.

To get the inspiration here are some of the greatest achievements made by women of India.

You can see from the above examples that today girls are surpassing in every field may it be science, technology, games, astronautics, adventure, or politics. Daughters are equally valuable as sons in our society. They should not be separated from their rights and independence. “Girls are the spirit of our nation, save them and stop their exploitation”.

Question 1.
Who took the initiative to save a girl child?

Answer:
Prime Minister Narendra Modi took the initiative to save the girl child in India to improve the status of girls and women. The scheme was first started in Haryana state on 22nd January 2015.

Question 2.
Why do we need to save a girl child in our country?

Answer:
Female plays an important role as the male in the ecosystem of the world. Also, they have equal rights to live in this world. Hence, the practice of discriminating girl children should be abolished in India. Saving a girl will make the future of the country more progressive.

Question 3.
What measure has been taken by the government for the girl’s protection?

Answer:
The Indian government has taken many measures to save girl children such as Beti Bachao Beti Padhao, which is a very big project and supported by the NGOs and human rights activists.