Saubhagya Scheme Essay: The Saubhagya Scheme, which is an initiative from the central government, aims to provide last mile electricity. The target group of this scheme is the rural and the poor in urban households.

The Saubhagya scheme was launched on 25th September in the year 2017, by our respectable Prime Minister Narendra Modi. The budget that was approved for this scheme was around 16 crores.

We are providing students with samples of essays on a long essay of 500 words and a short essay of 150 words on the topic “Saubhagya Scheme” for reference.

The Saubhagya Scheme, which is also popular as the Pradhan MantriSahajBijliHarGharYojana with allocated funding of over 16 crores, has taken up the initiative to provide access to electricity to the rural households. The urban poor also comes under the umbrella of this scheme. The target year for the government to achieve such an innovative goal is set on 31st March 2019.

After independence, 70 years have passed, and still, there are almost four crore houses that are yet to receive electricity. Electricity is one of the most powerful gifts that science has given to humankind.

This scheme is thus very important for numerous such families. Undercover of this scheme, almost three crore families who are currently under the poverty line will receive free electricity for five years.

This scheme has several aims and objectives. The Saubhagya Scheme looks forward to reducing the quantity of environmental degradation. The provision of electricity at cheap rates ensures that the use of kerosene would be limited for lighting purposes. The scheme also aims to improve the quality of education and health services, to increase the economic activity, and to ensure better public safety opportunities.

For identifying the people who might come under this scheme, the government has decided to identify them based on Socio-Economic Caste Census, done in the year 2011. Those villages that are not electrified and also have not to be identified by Socio-Economic Caste census can also be brought under this scheme, but this requires a payment of 500 rupees.

The nodal agency for this unique scheme is Rural Electrification Corporation of REC. All forms of financial assistance are given to all distribution companies; private sector, state power or even RE cooperative societies.

The scheme also allows for installation of Photovoltaic Solar based stand-alone system in all the rural areas. This installation will be specially provided to those areas where the installation of grid-based power is difficult.

The central government has also promised to provide various forms of subsidies to equipment. Such subsidies are available for appliances like cable meters, transformers, wires etc.

The supply of electricity to such rural households often comes with numerous challenges. The most common challenge for this is identifying households with illegal electricity connections. Other problems that are related are regular power cuts, power wastage, proper installation of electrical equipment and so on. To make the best of this scheme, these problems need to be solved with urgency. The government has to come up with innovative ideas so that these problems can be minimised. Saubhagya Scheme aims to provide free electricity to over three crore households, identified by Socio-Economic Caste census (2011). Apart from free electricity, this scheme looks forward to providing 24×7 electricity to rural households and the urban poor. This provision will significantly benefit education and job scopes, along with better standards of living. There are numerous subsidies provided for various electrical equipment. The life of women in rural households will be better, as they won’t have to travel for long distances only to arrange food and water.

There should be, however, a few key points to be remembered. Only those beneficiaries who can provide genuine identity proofs should be given this provision. There also should be the use of modern technology to reduce environmental degradation.

10 Lines on Saubhagya Scheme in English 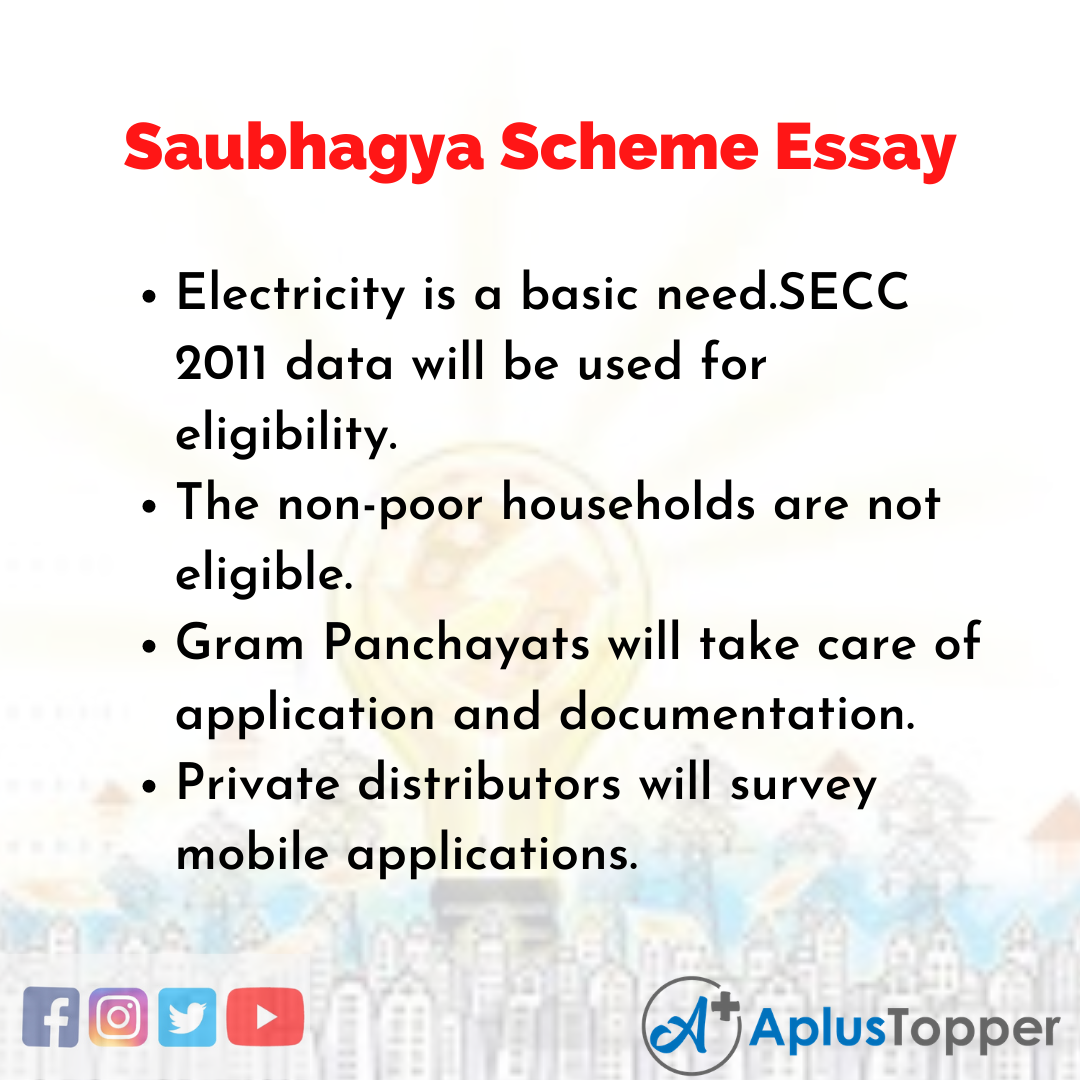 Question 1.
Who launched the Saubhagya Scheme?

Answer:
The Saubhagya Scheme was launched by the respected Prime Minister of India, Shri Narendra Modi.

Question 2.
Who are eligible for free electricity under Saubhagya Scheme?

Answer:
For understanding the eligibility, the data from the Socio-Economic Caste census (2011) would be used. Those poor households not registered in SECC are also eligible, but they have to pay 500 rupees.

Answer:
It is a scheme which aims to provide 24×7 power supply to the rural households in India. This scheme is the brainchild of renowned political thinker DeenDayalUpadhyaya.

Question 4.
What is the importance of Saubhagya Scheme?

Answer:
This scheme will help reduce the use of kerosene, which is a source of environmental pollution. The provision of free electricity also ensures that there will be better education and employment opportunities.