Same Sex Marriage Essay: Sex is a biological term that differentiates between two biologically different human beings- the Male and the Female. When we talk about same sex marriage, we are intending to a sacred union of two people belonging to the same sex. This union can be called when two females get married to each other or when two males get married to each other. It is not the sex or gender that binds two souls together but love and care for each other.

Same sex marriage has been legal in many countries for a very long time. Indian judicial system legalized LGBTQ+ rights on 6 September 2018.

We are providing a long essay on same sex marriage of 500 words and a short essay of 150 words on the same topic along with ten lines about the topic to help readers.

Love has no boundaries; thus, marriages are no longer limited to heterosexual sted in couples. Same sex marriages have been legalized in several countries that have lead to the initiation of demanding equal rights by the people of the LGBTQ+ Community. With the struggle of these activities, it has now become possible for same sex couples to be free and enjoy equal rights in some countries.

Same sex marriages are not a trend or western influence that is adapted by the society. Same sex attraction has existed from ancient times. It was not openly and vividly talked about due to lack of knowledge and understandings. It is still a taboo in most of the world. It is our responsibility to educate ourselves and the world so that the same sex couples do not face discrimination.

In India, same sex marriages are yet to be legalized. On 6 September 2018, the Supreme court of India decriminalizedecriminalize gay sex marking a historic judgement in the Indian judiciary. The court defined love to be without boundaries. This historical judgement is a result of prolonged protests and sufferings. It was welcomed and celebrated by the country with joy.

Same sex marriages are held like every other marriage. The rituals and traditions are not different for the same sex marriage than a heterosexual marriage. Both kinds of marriage are intended to unite two souls who are in love and care for each other. Discriminating and judging same sex couples in inhuman and wrong. This mindset needs to be changed as we are moving towards a progressive world.

To understand the concept of same sex attraction and the LGBTQ+ community, proper sex education must be introduced in school level. This education is very important so that a person discovers the true soul and desire within oneself. It is always said to be with the person one loves. To find the person one loves, we must educate ourselves about the different aspects of love and desire. Educating oneself of the various aspects of sexual attraction will lead us to be a better person and make others a better person.

We have come a long way now in protecting gay rights. It is the duty of every individual to support the cause of equality. Same sex marriages must be legalized in all parts of the world, and the same sex couples must be given equal human rights.

Same sex marriages must be welcomed with joy, and the same sex couples must not be subjected to discriminations. Marrying anyone is a basic fundamental right, thus not allowing the same sex couples to get married is devoiding basic human rights. We must take care that the LGBTQ+ community are not devoid of their fundamental rights and are treated with respect like everybody else. 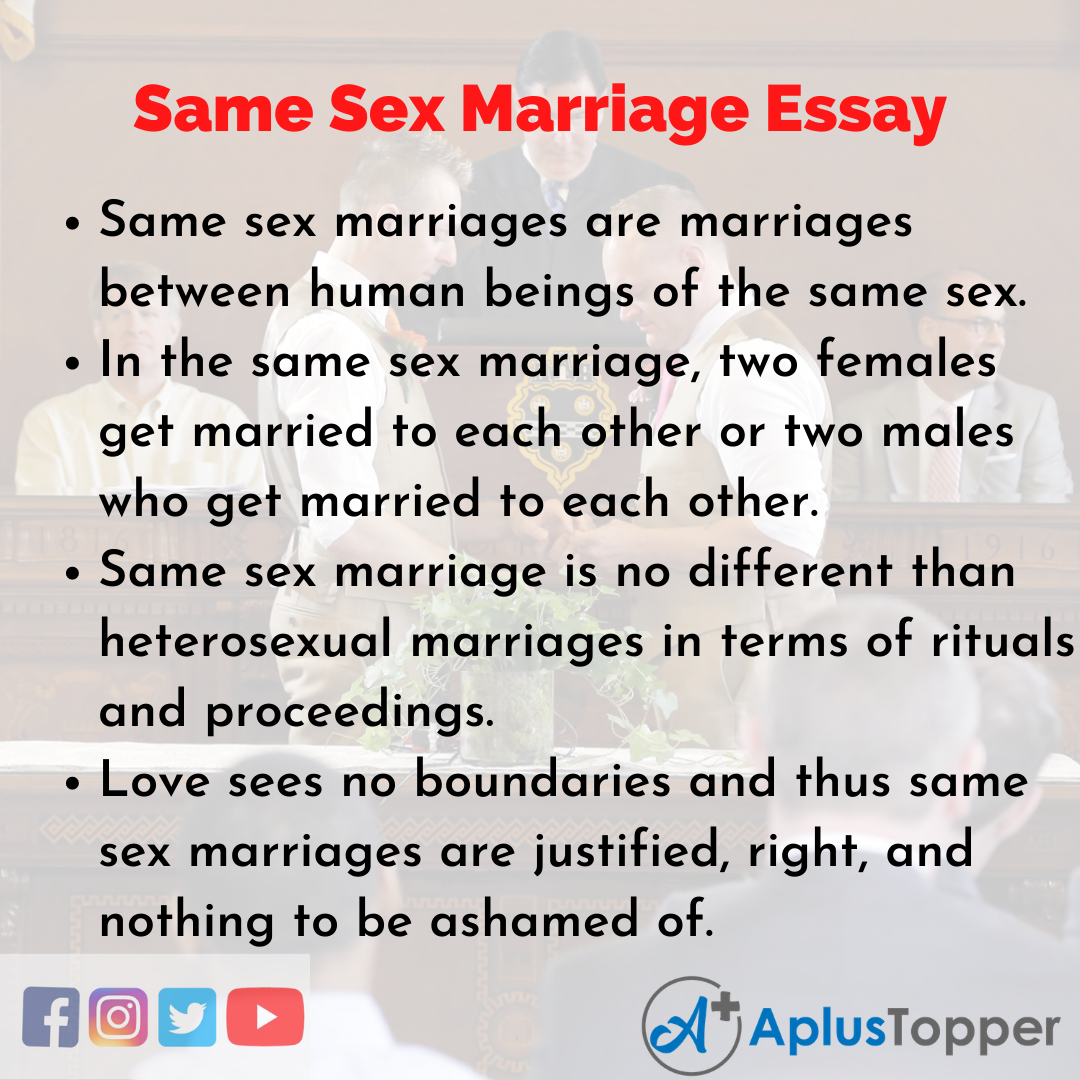 Love is the sacred thread that binds two people in a marriage. Same sex marriages are no different than normal marriages. The rituals are followed and enjoyed by the brides and grooms with their families. The only difference is the presence of two brides or two grooms. Same sex marriages must be celebrated, and same sex couples must not be devoid of equal rights.

Some countries around the world have legal rights for same sex couple just the way heterosexual couples. However, most of the countries have strict rules against same sex marriages on religious and philosophical perspective. LGBTQ+ activists are struggling to gain equality in such countries. 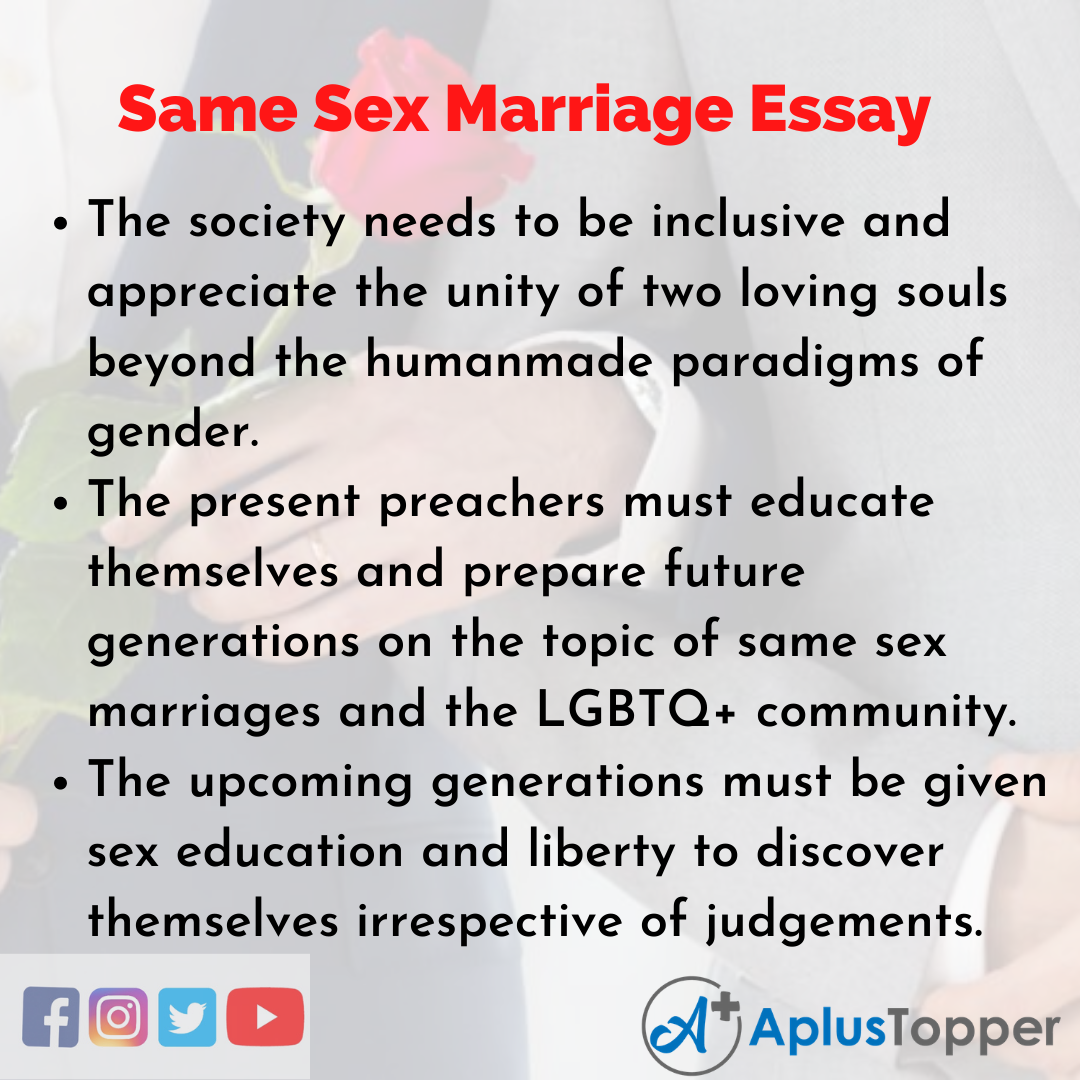 Answer:
No, same sex marriages are not a disorder. It is completely normal and biological.

Question 2.
Can anybody marry a person of the same sex?

Answer:
Same sex marriages depend on the sexual preferences of an individual. Everybody is not entitled to have the same preferences.

Answer:
Same sex marriages are not yet legal in India.

Question 4.
What is the full form of the LGBTQ community?