According to researchers, Salem Witch Trials were a series of court trials that took place from 1692-1693 to prosecute the people accused of practising witchcraft.

We are providing students with a sample long essay of 500 words and a short essay of 150 words on the topic Salem Witch Trials for reference.

The major hearing of Salem witch trial was conducted by the Oyer and Terminer Court, which is situated in the Salem town of Massachusetts. But before the major trial took place, the prior hearings were carried out for Salem witch trials in various towns.

During 1692 to 1693, many individuals rounded up being imprisoned for being charged with the allegations of practising black magic. Among the people who were accused and arrested, some died in prison and other than that, five men and fourteen women were hanged with the accusation of committing the crime.

Since many religious extremists and critics considered witchcraft to be counterproductive, the fear of it stimulated in other people of the community as well. Prior to the trials, there occurred several problems in the society that people assumed were attributed to the witches living in the town of Salem. The accused individuals who were arrested were found to possess things that people believed them to use for propagating their activities.

People of Salem Village already had some preconceived ideas about witches. Most of them believed that the witches were the reason behind drought, failure of crop, illnesses and deaths that were taking place in the late sixteen hundreds. However, much later after the Salem witch trials, the researchers looked into the matter. Researchers came up with some logical information that might have reasons behind the occurrence of the unfortunate incidents in Salem that led to people making accusations about black magic practice back then.

Salem was a troubled town which was evident to create such controversy. It is because, during that time, Salem was a place under political turmoil along with a great number of land disputes. Since farm disputes in the Salem village led to poverty, therefore many people became too poor even to feed their families. Another cause of dispute in Salem was the religious turmoil that took place because of the churches. And it can be assumed that all this might have been the real reasons behind the accusation of witchcraft and black magic.

The people who were accused were the ones who happened to be socially awkward or reclusive. Since these people seemed to not fit in the society, hence they were branded to be witches. It is also said that many of the cases were unjustified and false accusations. Now we shall always remain in a dilemma and speculate whether the accused and hanged people were guilty or not.

The Salem witch trials did not occur within a few days or weeks. The events continued for months during which the ones who were accused were imprisoned and made to wait for their trials or sentences. And it was because of the terrible conditions of the prisons back then, women and her child died. Even though we cannot state for certain whether the accused were guilty or not, but what we do know is that the town of Salem was filled with paranoid and impetuous people who through this controversy searched for an excuse for their problems. 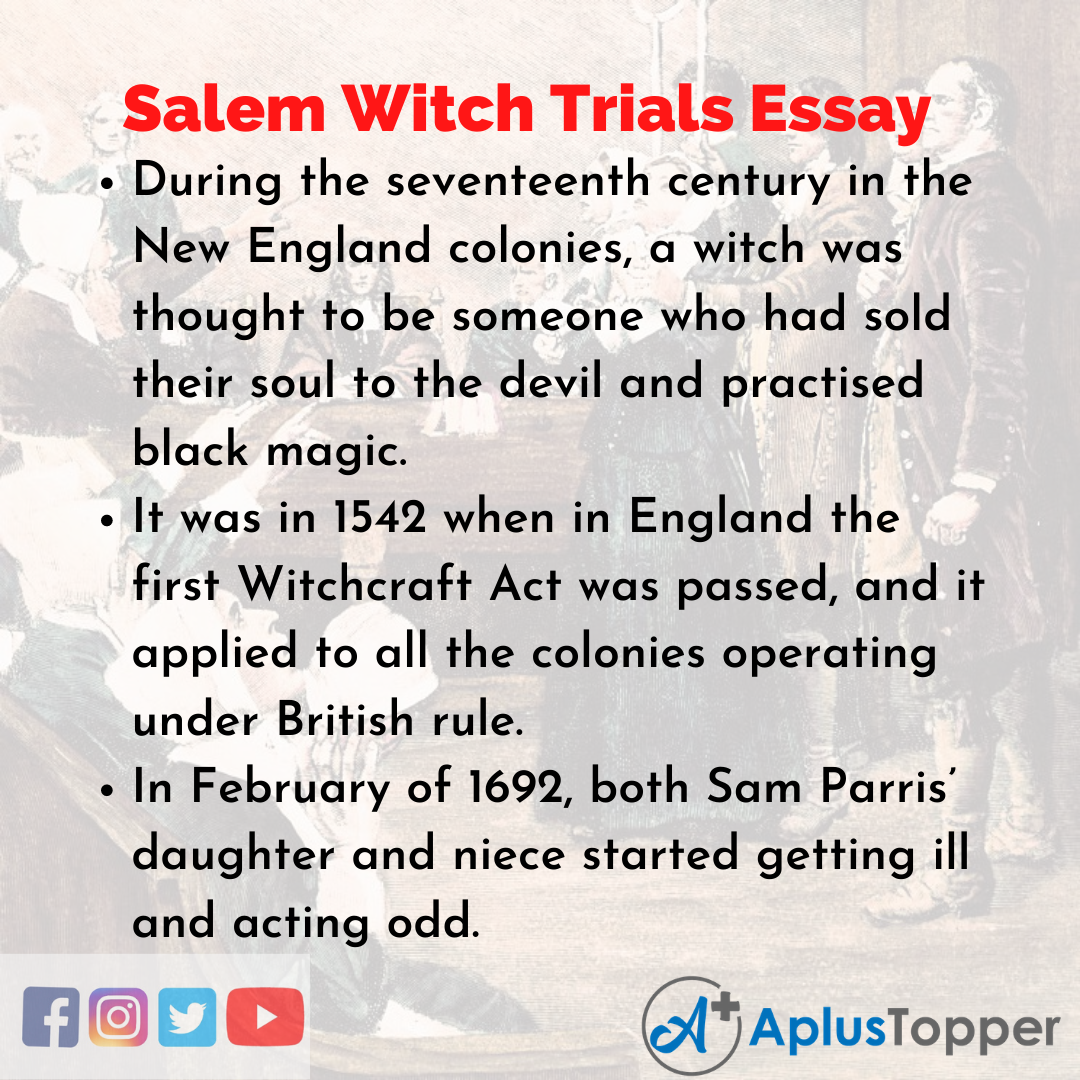 A small town in Massachusetts named Salem that unfortunately earned a reputation from the infamous witch trials. The events that transpired in that town occurred between the years 1688 to 1693, and it constituted the major black magic or witchcraft outbreak in the history of New England colonies.

The trials involved the imprisonment of several accused individuals and executions as well. The total counts of recorded deaths included the hanging of nineteen men and women, one man being pressed to death, and more than seventeen deaths in the prison.

Later the colony admitted that the accusations and executions made during Salem witch trials were mistaken and therefore the families of the victims were compensated. The incident of Salem witch trials became synonymous with paranoia, and it also became a symbol of the wrong done in and by the society which should never be repeated. The horror of the injustice done in the story continues to haunt society even after three hundred years. 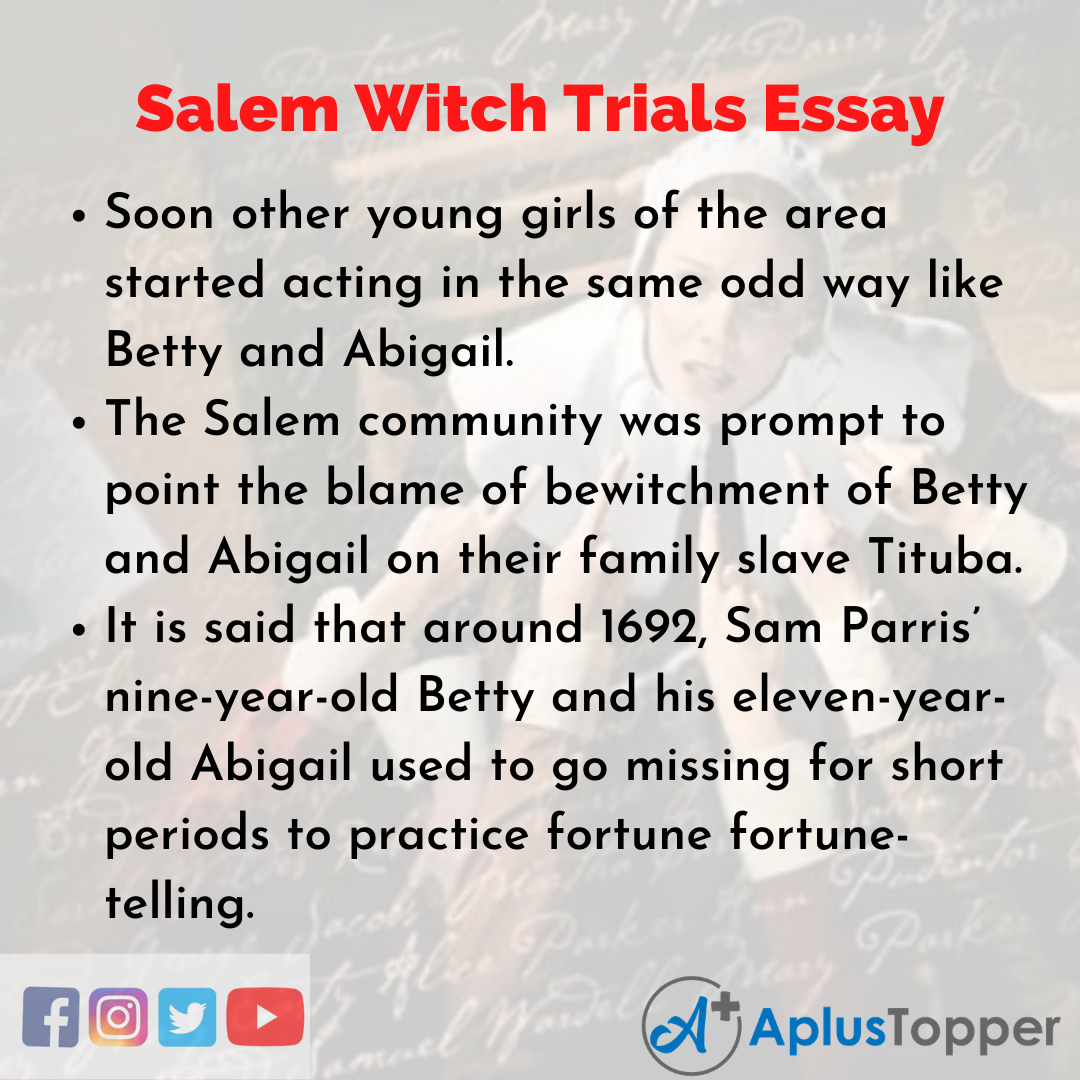 Question 1.
Why did the Salem witch trials take place?

Answer:
Culmination of several troubles of the town of Salem contributed to the aspect of the trials taking place from 1692 to 1693.

Question 2.
Who was the first individual accused of practising witchcraft in Salem?

Question 3.
Where did the Salem witch trials take place?