We are providing students with essay samples on a long essay of 500 words and a short essay of 150 words on Romeo and Juliet for reference.

Long Essay on Romeo and Juliet 500 Words in English

One of the greatest romantic tragedies, written by William Shakespeare, is Romeo and Juliet. This play is based on love and fate. Originally this story was an Old Italian tale that in the 16th century was translated into English.

This tragic love story in one line can be expressed as the story of two young star-crossed lovers whose death resulted in uniting of their feuding families. Romeo and Juliet is a play that is commonly taught in schools and colleges. And on many occasions, the Romeo and Juliet play is very frequently performed.

Throughout the play, celestial imagery references like the stars, sun, moon, and heavens are used to express a different view of human responsibility. Just like in the prologue, the protagonists are referred to as ‘star-crossed lovers’ which represents the common belief that celestial bodies have the power to control the events occurring on Earth. The destiny often seemed to be associated with stars as if both Romeo and Juliet were inescapably destined to fall in love with each other.

You can now access Essay Writing on Romeo and Juliet and many more topics.

Again in Act 1, Scene 4, when the gang is approaching the Capulet’s ball, Romeo expresses his fear that the consequences of their actions are “hanging in the stars”, which refers to the astrological power of the stars that are used to predict destiny.

However, in the very next mention of stars in the play, Romeo doesn’t talk about their astrological connection; instead, he uses the stars to describe the otherworldly beauty of Juliet. Similarly, from Romeo’s love-struck comparison of Juliet to the Sun, Juliet also expresses her wish to cut Romeo into stars when he dies. These celestial images are associated through the play in this vein, and these images were often associated with Romeo and Juliet than with the divine fate.

Romeo, as a character, was very impulsive as his rash actions often got him and his beloved Juliet in a lot of trouble. For example, Romeo on the night he met Juliet, he climbed over Juliet’s wall to press her to bind her to himself. Another incident when Romeo’s rash action arguably drives the entire play towards tragedy is when he killed Tybalt out of blind rage. Then at the end of the play, Romeo poisoned himself after rushing into the conclusion that Juliet is dead.

The play concludes with strong condemnation of the actions of the character. The closing frame of the play portrays the Montagues and Capulets unitedly gathering around the tomb of the protagonists to witness the consequences of the tragic incident. The story ended with a realization that it was not fate or Gods who caused this tragedy, but the situation was solely driven by the blind hatred between the two families. 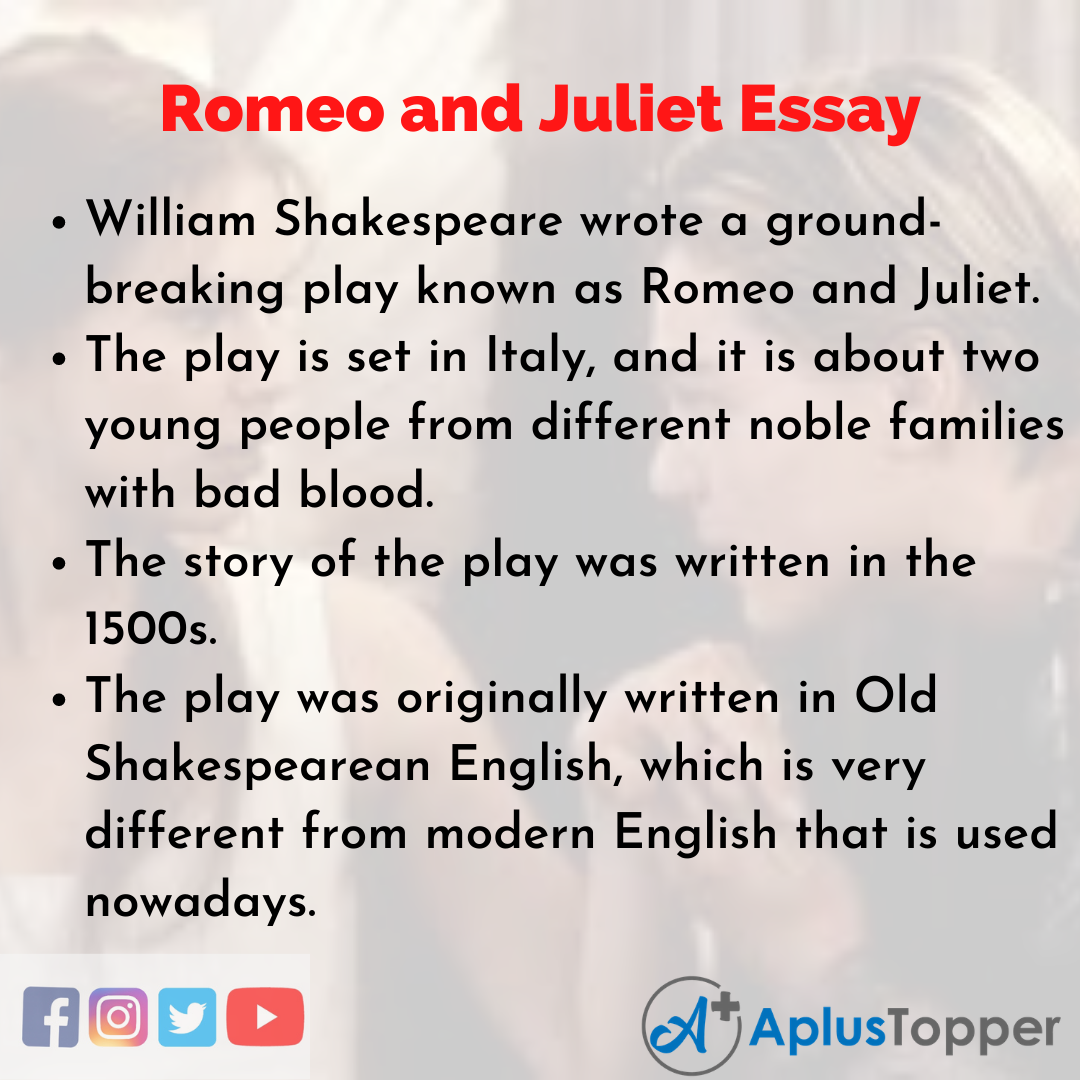 Short Essay on Romeo and Juliet 150 Words in English

It is assumed that Romeo and Juliet most likely had been acted by the Lord Chamberlain’s Men at the Theatre for the first time and soon after at the Curtain as well. But from the records, it can be said for certain that in 1662 Romeo and Juliet was staged by the Duke’s Company.

The plot of Romeo and Juliet has been modified many times over the years. First, William Davenant revived and revised the plot then David Garrick modified several scenes, removing several then considered indecent scenes so that it was considered as the 18th-century version of Romeo and Juliet. Georg Benda used a happy ending and omitted many actions of the play. In this way, the play kept on being modified.

10 Lines on Romeo and Juliet Essay in English 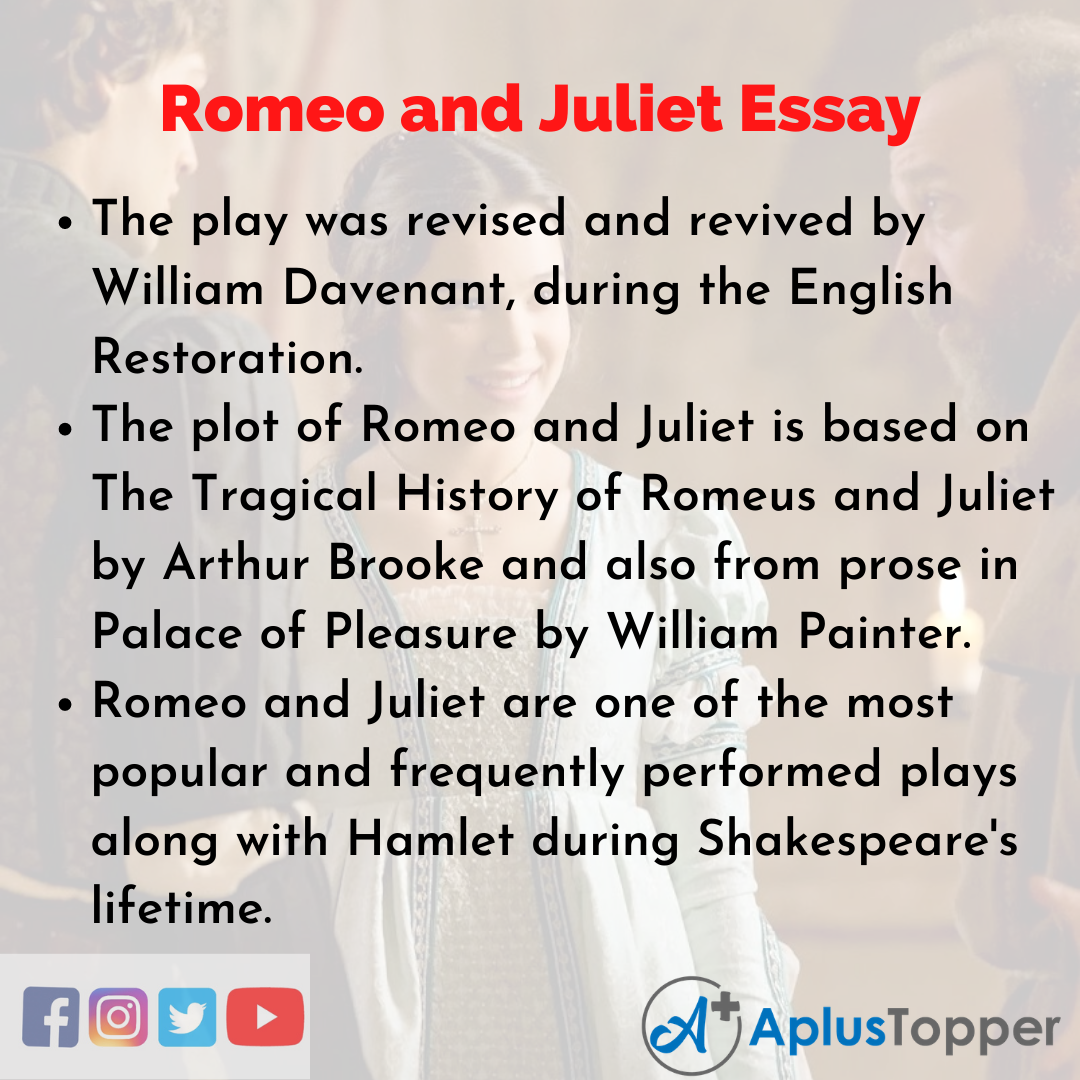 FAQ’s on Romeo and Juliet Essay

Question 1.
Is the play Romeo and Juliet based on the real-life story?

Answer:
In the year 1594, Girolamo del Corte wrote a book named Storia di Verona where he related the story of Romeo and Juliet and claimed that it is a true event which happened in 1303.

Question 2.
Where is the setting of Romeo and Juliet’s plot?

Answer:
The plot of Romeo and Juliet is set in Italy, mainly in Verona and Mantua.

Question 3.
What is the genre of Romeo and Juliet?

Answer:
The genres of Shakespeare’s play Romeo and Juliet is a Shakespearean tragedy as it is based on two young star-crossed lovers, ultimately whose death unites the feuding families.

Question 4.
When is Shakespeare believed to have written Romeo and Juliet?

Answer:
Although it is not exactly known when the play Romeo and Juliet by Shakespeare was written, it is believed that it was written plausibly between years 1591-1596.