Robotics Essay: What do you think of when you think about ‘robots’? If you think they are only the stuff of space movies and science fiction novels, then think again. Robots are the largest growing technological device in the world. They perform many functions ranging from space exploration to entertainment. Robotics technology is increasing at a fast rate, providing us with new technology that can assist with home chores, automobile assembly and many other tasks. Robotic technology has changed the world around us and is continuing to impact the way we do things. Robotic technology transformation from the past to present surrounds almost everyone in today’s society and it affects both our work and leisure activities.

Below we have given a long essay on Robotics of 500 words is helpful for classes 7, 8, 9 and 10 and Competitive Exam Aspirants. This long essay on the topic is suitable for students of class 7 to class 10, and also for competitive exam aspirants.

Robotics is the branch of mechanical engineering, electrical engineering and computer science that deals with the design, construction, operation, and application of robots, as well as computer systems for, their coptrol and processing. These technologies deal with automated machines that can take’the place of a human in various kinds of work, activities, environments and processes.

The definition of the word robot has a different meaning to many people. According to the Robot Institute of America, 1979, a robot is a re-programmable, multi-functional manipulator designed to move material, parts, tools, or specialised devices through various programmed motions for the performance of a variety of tasks. The use of robots continues to change numerous aspect of our everyday life, such as health care, education and job satisfaction. Robots are going to be a major part of the world economy, they help ways to make our daily life easier and assist in producing more products.

Robotic technology is becoming one of the leading technologies in the world. They can perform many functions. They are used in many different ways in today’s society. The use of robotic technology has made an immediate impact on the world in several ways. As technological advances continue, research design and building new robots serve various practical purposes, whether domestic, commercial or military. Many robots even do the jobs that are hazardous to people such as defusing bombs, mining and exploring shipwrecks.

There are numerous uses of robots which not only give better results but also help in saving money as well as time. The robots can provide high quality components and finished products, and do so reliably and repeatedly even in hazardous or unpleasant environments. There are various industry segments which are making use of robotics to improve their production capabilities.

Much of the research in robotics focuses not on specific industrial tasks, but on investigations into new types of robots, alternative ways to think about or design robots, and new ways to manufacture them.

Recently, Apollo Hospital group installed the world’s most advanced CyberKnife robotic radio surgery system at the cancer speciality centre in Chennai, India. Although it meant substantial price for the hospital, Apollo decided to go ahead with the project due to the new-found enthusiasm for robotics in India.

From the Chandrayaan I project for sending robots to moon, to biomedical engineering and the auto industry, India has been using robotics on a wide scale. In an increasingly technology-driven country, robotics has fast assumed significance not only for industrial applications, but also in various day-to-day human activities.

Presently, robotics is the pinnacle of technical development. Though robotics in India is at a nascent stage, but industrial automation in India has opened up huge potential for robotics. Innovation coupled with consolidated research and development has catapulted India’s scientific position in robotic technology.

The country is soon to become a major hub for the production of robots. The global market for robots is projected to rise by an average of about 4%, while in India, the industry is expected to grow at a rate 2.5 times that of the global average.

In medical field, the importance of robotics has been growing. Robotics is increasingly being used in a variety of clinical and surgical settings for increasing surgical accuracy and decreasing operating time and often to create better healthcare outcomes than standard current approaches. These medical robots are used to train surgeons, assist in difficult and precise surgical procedures, and to assist patients in recovery. The automobile industry is equally dominated by robots.

There are multiple number of industrial robots functioning on fully automated production lines especially the high and efficient luxury and sports cars. The use of industrial robots has helped to increase productivity rate, efficiency and quality of distribution. Another major area where the use of robots is extensive is the packaging section. The packaging done using real robots is of very high quality as there is almost no chances of any human error. Another example where robotics is used is the electronic field. These are mainly in the mass-production with full accuracy and reliability. With these varied usages of robots Bill Gates has said

“Robots will be the Next World-Changing Technology”

Robotic has spread like an infection to an extent that so many movies and serials are also based on its theme. Some popular movies include Star Wars, Robocop, Ra one, Transformers etc. With such acclaimed popularity India too has come up with the Robotics Society of India (RSI). It is an academic society founded on 10th July, 2011, which aims at promoting Indian robotics and automation activities. The society hopes to serve as a bridge between researchers in institutes, government research centres and industry. 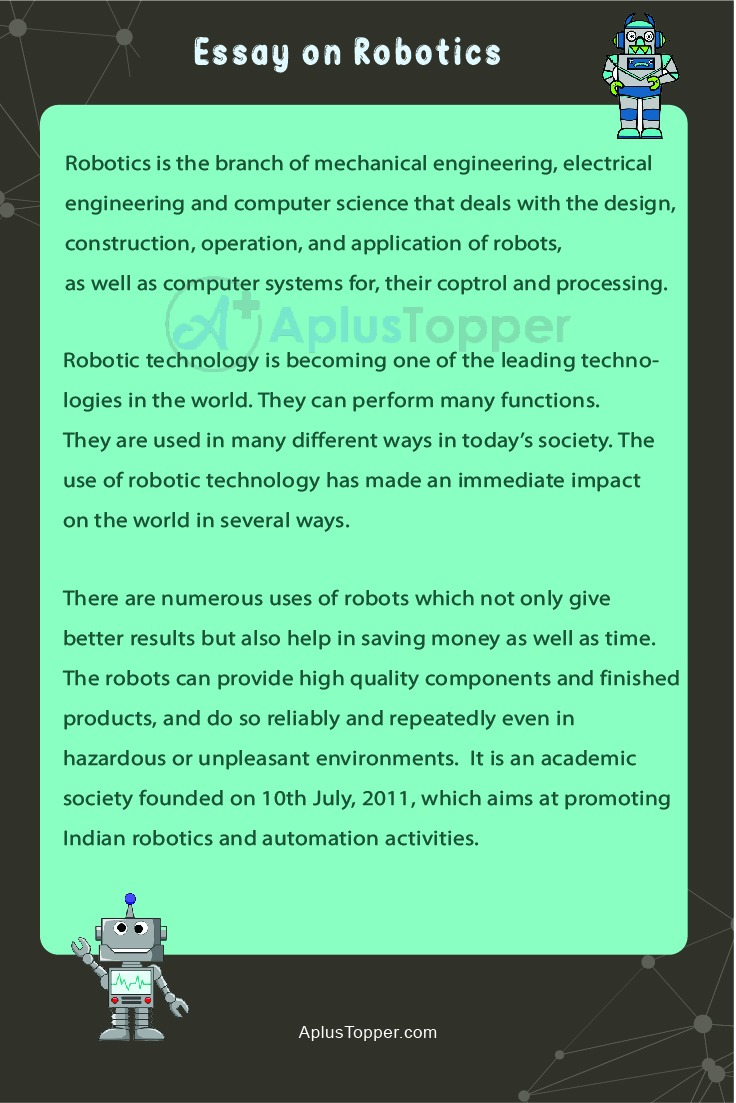 Below we have given a short essay on Robotics is for Classes 1, 2, 3, 4, 5, and 6. This short essay on the topic is suitable for students of class 6 and below.

India has also come up with specialised programmes in robotics field in IITs and other universities. Also, it has moved beyond the traditional areas and entered newer domains of education, rehabilitation, entertainment etc. Robotics has helped handicapped people by replacing their (damaged) limbs with artificial parts that can duplicate the natural movements.

Like a coin has two sides, robotics too has a flip side to it. The biggest barrier in the development of robots has been the high costs of its hardware such as sensors, motors etc. The customisation and updation is also an added problem.

With new advancements taking place each passing day, new product introduction is a problem for the existing users. Robots cut down labour, thereby reducing the opportunities of employment for many. In many developed countries, scientists are making robotic military force that can prove dangerous to others. As the power and capacity of computers continues to expand, revolution is being created in the field of robotics. Imagination is coupled with technology. It would not be wrong to say that in near future there will be a time when robots will become smarter than the human race.