Renaissance Essay: The word renaissance means rebirth. The Renaissance that took place in the periods of 15th and 16th centuries in is probably one of the most celebrated periods of European history. Even though two different periods of history do not have any form of demarcation, but the Renaissance worked to mark the transition from the Medieval Age to the Modern Age.

We are providing students with essay samples on a long essay of 500 words and a short essay of 150 words on the topic “Renaissance” for reference.

The meaning of the word renaissance means rebirth. The period was named so as the period was almost sort of a rebirth of human thinking capabilities, art, culture, morals, etc. in Europe between the 14th and 16th centuries (the period is debated over at times). The Renaissance has been associated with the great social change which followed the later medieval period (a period of crisis).

It is said that the period of the Renaissance was a break from the middle ages, but some argue that it was an extension of the Middle Ages. Humanism is what defined the earliest ages of the Renaissance which came into being and formation because of the events of the later Middle Ages, such as the fall of the Roman Catholic Church and intellectual reawakening.

Humanism developed earliest in Italy by secular men like Leonardo Bruni, Giovanni Pico Della Mirandola, etc. instead of scholar clerics who had dominated intellectual awakening in the Middle Ages. Dante was one of the predecessors of Humanism.

The concept of Humanism was derived from the concept of Roman Humanitas and the rediscovery that was done regarding Greek philosophy, one of them being the Protagoras. The fall of Constantinople worked as a boost for Humanism and many scholars arrived in Italy with books and manuscripts from Greece. Humanism emphasized took all forms of human manifestation as a subject emphasized the dignity of man and highlighted about the compatibility and unity of all truth in syncretism.

Art and architecture, science, culture, geography, religion, political establishments and human thinking, all went through massive changes in the period of Renaissance. In art, during the Renaissance, the ‘point perspective’ was established, and artists like Leonardo Da Vinci, Michelangelo and Raphael flourished. Even though Michelangelo and Raphael were contemporaries and both had their unique styles with the touch of Renaissance Art and hence were both celebrated for their differences and similarities. Da Vinci’s work on human anatomy is something that the world will be ever grateful for. Thus, intermingling art and science also led to scientific and medical changes and improvements during the Renaissance.

Europeans set out into the world and found out about the various other continents and established trade connections (which later led to colonization) with them. Christopher Columbus is one big name during this period because he was responsible for the finding of the ‘New World’ (even though Columbus intended to find a different route to India, hence when he landed on the ‘New World’ he thought it was India).In the scientific fieldworks of Copernicus, Vesalius, Galileo, Kepler, etc. are celebrated. Copernicus’ book ‘On the revolutions of the heavenly spheres’ (translated in English) and Vesalius’ book on ‘The Workings of the Human Body’ paved ways for several other scientific innovations and discoveries, which, many historians argue paved the way for the Modern Age to set in. The Renaissance period, to be defined in a single sentence was the period of light, discoveries, rebirth and reawakening. 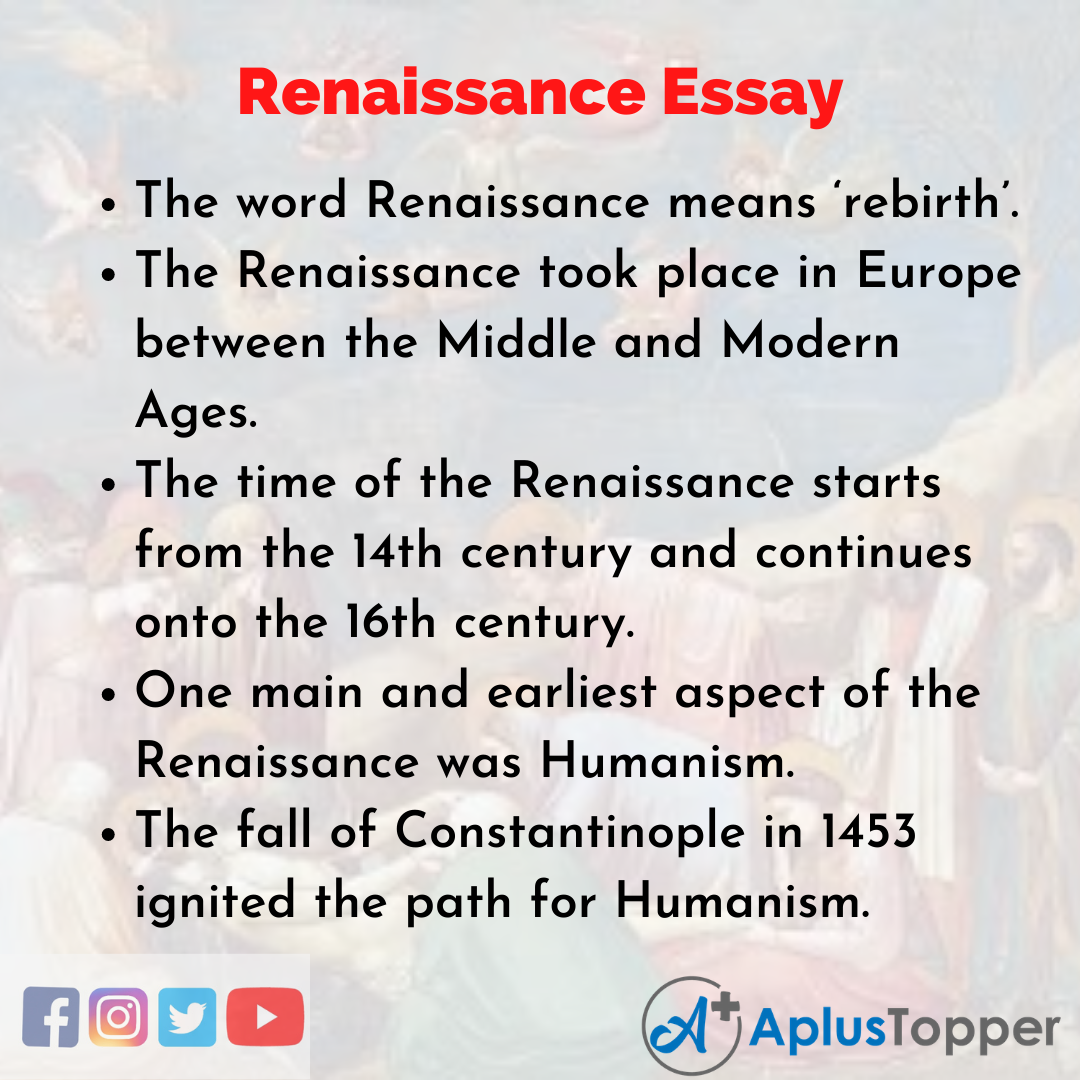 The time between the Medieval Age and Modern Age in Europe is called the Renaissance French word), which means rebirth. It took place around 14th to 16th centuries which at times are also argued by historians.

Some prefer to segregate the Renaissance as a separate period. In contrast, some say that it was the extension of the later Medieval Age, regardless it worked as a marking period between the medieval age and modern age. Art, architecture, science, literature, geography, human thinking and philosophy, religion and political and social structures, all by mingling with each other, went through a reawakening or rebirth, hence living up to the name of the period in history.

Humanism, beginning in Italy, was one of the earliest characteristic features of the Renaissance which was inspired by the Roman ‘Humanitas’ and was ignited by the fall of Constantinople which led scholars to come into Italy with Greek books and manuscripts. Historians believe that the later developments in science and medicine are what led to the setting in of the Modern Age.

10 Lines on Renaissance in English 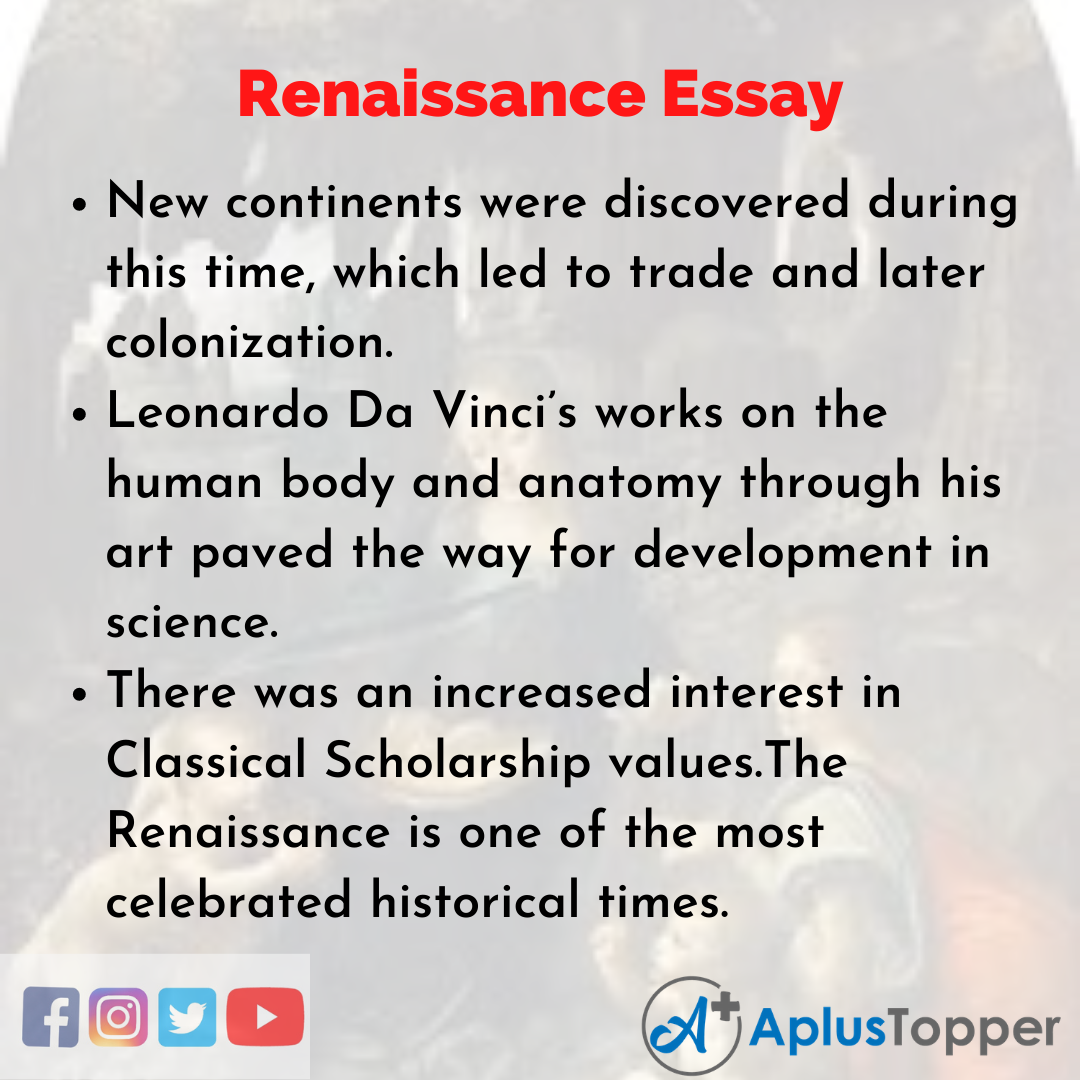 Question 1.
What does the word Renaissance Mean?

Question 2.
When did the Renaissance take place?

Answer:
The Renaissance took place between the 14th and 16th centuries.

Question 3.
What is the Renaissance?

Answer:
Renaissance is a period in history when in Europe science, art, medicine, astronomy, art, literature, human values flourished and had an awakening, leaving an impact all over the world. It worked as a demarcation point between the middle and modern age.