Religions Essay: The belief in a divine deity or entity is known as religion. Religion is actually about God’s presence, who is also known as the controller of the world. Due to the different beliefs of different people, many different cultures exist.

Believing in any religion is a choice and also a lifestyle. Being religious is a form of having the freedom to do and pray to whichever and whoever you want to worship and be part of any religion.

We provide students with essay samples on a long essay of 500 words and a short essay of 150 words on the topic Religions for reference.

The basic institutions of any society are known as religion. It is found in every society as it is a universal society. It is also given the title of a social system in which there are common rituals, customs, traditions, and faiths.

There are various types of religions found in the world. Some of the major religions are Hinduism, Jainism, Christianity, Islam, Buddhism, Sikhism, Farsi, etc. Although these different religions preach and follow different principles, all religions have some basic characteristics and features.

Every society has some religious system, although, in modern-day scenarios, religion’s role decreases; the social system of religion is continuing to exist. There is a common god in every religion. For Christians, it is Christ, and for Muslims, it is Allah and so forth.

Certain rituals are performed for every other religion, which is their common rituals. It is believed that religion’s existence came into view since time immemorial. The origin of religion is a very old concept. According to anthropologists, fear of death and belief in life after death are the contributing factors in religion’s growth.

Although religion does connect people at certain levels, it also distributes people into groups, and this type of division comes in the way of the development of a country. People of various religions try to impose their religion on people belonging to other religions, thinking that their religion is superior to others.

There are sets of beliefs and rituals in some religions that are quite often seen as superstitious. These beliefs block the progress of individuals and society belonging to that particular religion. Many religions still do not take any account in improving the status given to a woman.

It is very challenging to convert the beliefs and attitudes of conservative people belonging to certain religions, which hinders social changes. The basic component of religion is the belief that there exist supernatural powers controlling the universe.

According to religion believes these powers control all-natural phenomena and have great influence over human life. Certain things are considered sacred or holy not because of any particular quality of that thing but due to the attitude of that thing.

Management perspectives and practices depend on religions. It plays a major role in business organizations, for instance, the payment of bonuses for certain festivities, declaration of holidays for a particular religious festival, and even advance festival schemes. Thus, religions are one of the most important influencing factors in the policies and practices of an organization.

One of the major factors for the development and modernization of any country is secularization, which occurs in various contemporary societies. This process is desirable and good for humanity, exactly as modernization. 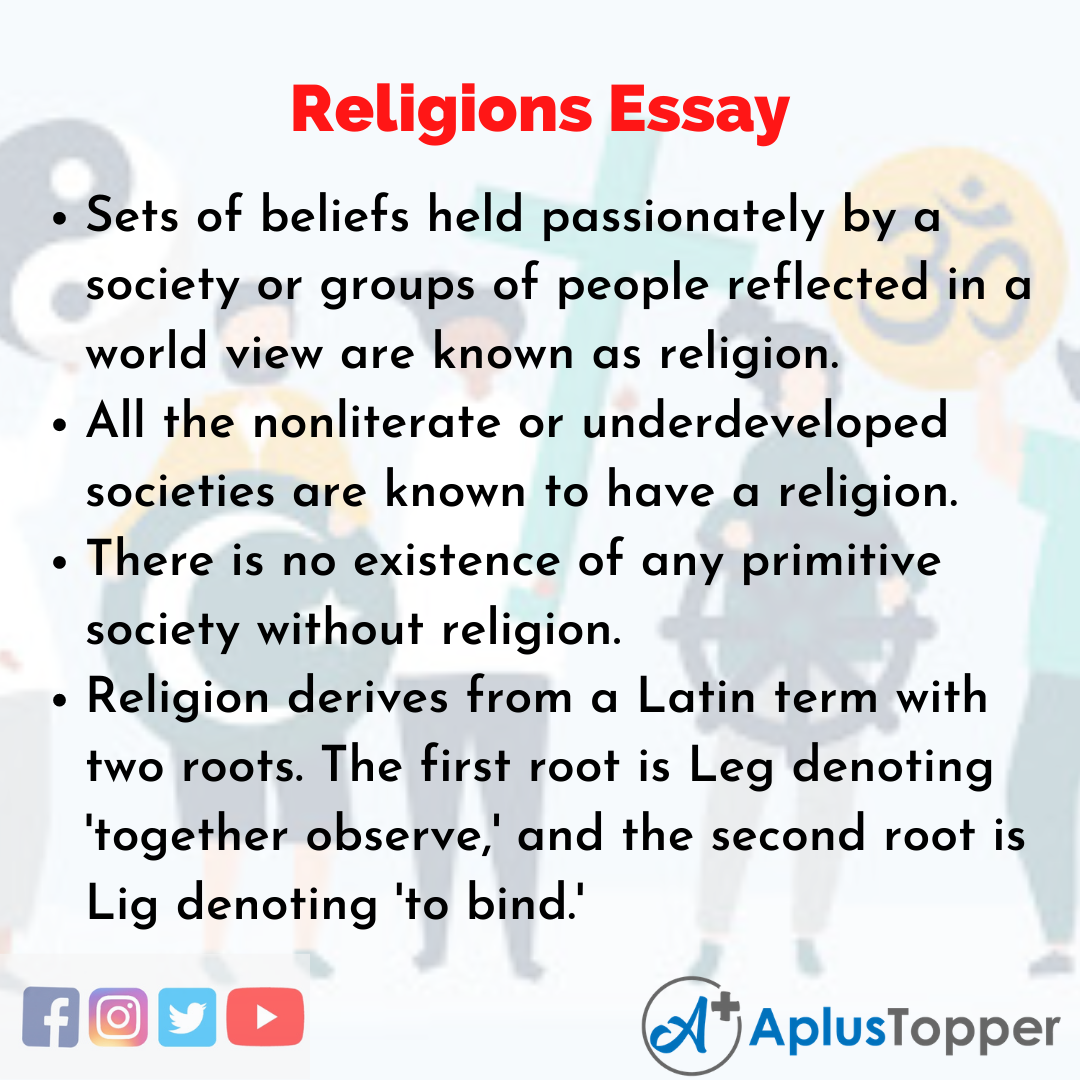 Religion refers to a system of beliefs, values, and practices which is sacred and holy. Power and supernatural entities are considered the ultimate reasons for the existence of humanity. The sociologists who analyze religion deal with how religious practices and beliefs are expressed in societies and how religions lead to riots and conflicts within a country, and how secularism contains interreligious prejudices.

Different religion has different moral code each set by their ideas about things and set of beliefs. For a certain time of year or at a certain time of an individual’s life, they often have certain rituals, which are specials things that are always done in the same way. People who do not believe or follow any religion are known as atheists. Those people who believe that there exists a path to goodness, duties, and truth are called believers or faithful. They are the followers of one or more than one religion at a time.

10 Lines on Religions Essay in English

1. Sets of beliefs held passionately by a society or groups of people reflected in a world view are known as religion.
2. All the nonliterate or underdeveloped societies are known to have a religion.
3. There is no existence of any primitive society without religion.
4. Religion derives from a Latin term with two roots. The first root is Leg denoting ‘together observe,’ and the second root is Lig denoting ‘to bind.’
5. Faith is the center of all religions, and it binds all human beings together to their temporal foundation.
6. Religion also beliefs in a mysterious or supernatural power, and this power expresses itself in overt activities designed by religions.
7. Some of the largest and expanded religions are Hinduism, Islamism, Taoism, Christianity, Sikhism, Jainism, and Judaism.
8. The individuals who assume that there is no proof of religion are known as Agnostics.
9. A religion is passed overtime from one person to another through myths and stories, which was maybe written down in the Bible or is a memory or story told by their predecessors.
10. There is a priest’s role in many religions who spend their whole lives passing on their religion’s teachings. 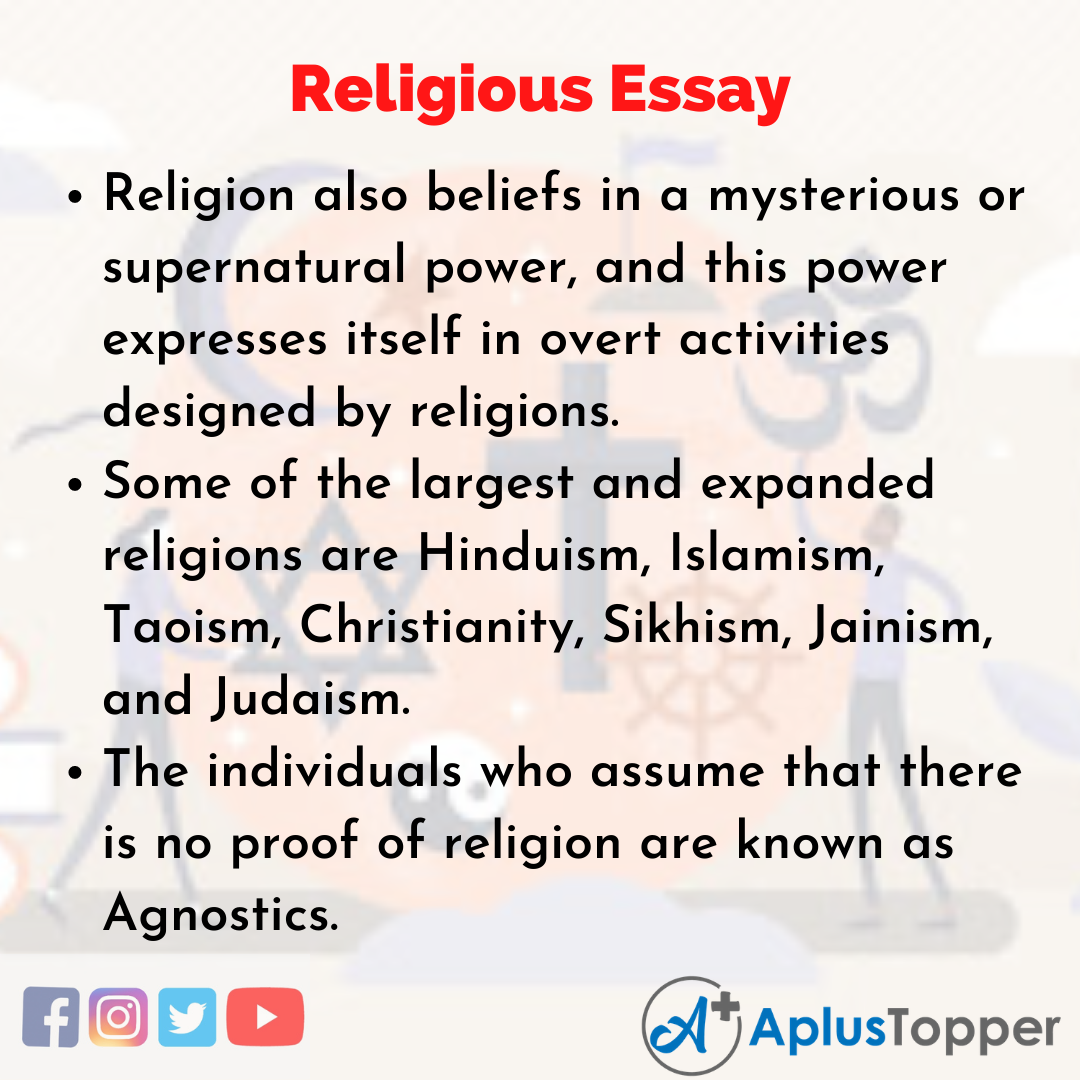 Question 1.
How does religion help in shaping someone’s life?

Answer:
Religion may make individuals feel good about themselves by making them feel that they are part of a larger culture. The self-esteem of religious people is very high, and they are mentally strong.

Answer:
Three benefits of religion are:

Question 3.
What is the total count of religions in the world?

Answer:
According to Adherents, which is a non-religiously affiliated and independent organization, there are almost 4300 religions all over the world.

Question 4.
What religion is known as the oldest religion in the world?

Answer:
According to many scholars, Hinduism is the world’s oldest religion, with its customs and roots dating back to more than 4000 years.