Reconstruction Essay: America has gone through several political changes to d ate with various leaders that have come and gone. Each of these leaders had different objectives and plans for the future. There were a number of revolutionary movements that eventually came to an end. Reconstruction was one such movement.

We are providing students with essay samples on a long essay of 500 words and a short essay of 150 words on the topic Reconstruction for reference.

Long Essay on Reconstruction Essay is usually given to classes 7, 8, 9, and 10.

As people say, Reconstruction was a period of putting back the pieces. At this point, America attempted at becoming a full running country once more. However, this was not an easy task; everyone’s mind was still traumatized by the memory of massive death which hardened into resentment and sometimes even hatred.

Preceding the Civil Wars, the South’s infrastructure and industry was practically left into ruins. It was practically non-existent politically and economically, desperately searching for a way back in.

Along with this, there were almost 4 million former salves that had become a part of the population and had no clue about how to make a living on their own. The 13th Amendment in 1865 had freed them, and they became a great concern to many political leaders in the future.

Political leaders each came with their plan of Reconstruction, and each was certain that their plan was the correct one. President at the time, Abraham Lincoln, was one of the first people to come up with a blueprint for Reconstruction. The ‘Lincoln Plan’ was open to people that stated that once certain criteria were met, a confederate state could return to the Union.

The Reconstruction era also was an attempt at transforming the 11 Southern former Confederate states – as the Congress directed – and the role of the Union States in the transformation.

There were three visions of the Civil War memory that appeared during the Reconstruction. The reconciliations vision – rooted in coping with the death and devastation that the war had brought. The White Supremacist vision – that included racial segregation and the preservations of White cultural and political domination in the South. Finally, the emancipationist vision – that sought full citizenship, freedom, male suffrage and Constitutional equality for African Americans.

The Reconstruction encompassed three major initiatives, the transformation of the southern society, restoration of the Union, enactment of progressive legislation that will be favouring the rights of the slaves that were freed.

The Reconstructions end is often spoken off its psychological terms as a failure of the Republican political will, or as a collapse of the white American’s nerve; when the sheer truth is that Reconstruction did not fail so much as it was thrown over.

The most obvious role in the overthrow of the Reconstruction was of the Southern Whites. Still, their success wouldn’t have been a success without the consent of the Northern Democrats – who were never in favour of an even-handed Reconstruction, much less a conventional one. The Reconstruction Era was a success but still had its drawbacks and exceptions. 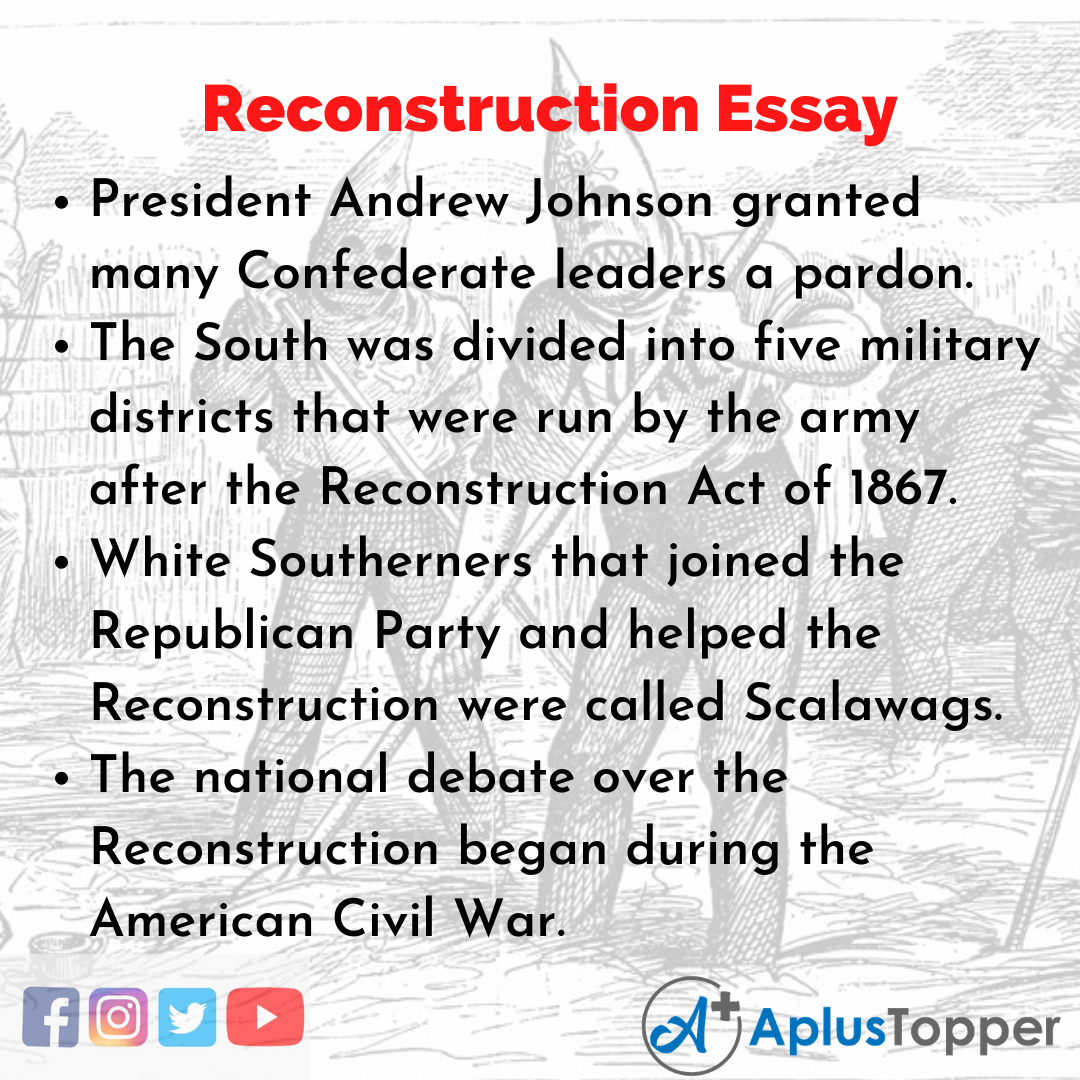 The Reconstructions Era took place from 1868 to 1877. Before the Civil war, the infrastructure and industry of the South were virtually left in ruins. It had to rely on the government that they had tried to stray away from as they were in dire need of help.

The Reconstruction Era can be evaluated as both success and failure of the ideals. This is chiefly because of the laws and bills that were passed as well as the backs of the steps that were encountered in the process.

When the eleven ex-Confederate states were restored to the Union, the Reconstruction Acts and the Radical Republicans that were passed during that time are examples of accomplishments that were made during the time.

The belief in White supremacy, the Black Codes and the corruption in business and government, are among the many failures that took place during the Reconstruction. Reconstruction was overall a period of greed, corruption and discrimination.

10 Lines on Reconstruction Essay in English

1. President Andrew Johnson granted many Confederate leaders a pardon.
2. The South was divided into five military districts that were run by the army after the Reconstruction Act of 1867.
3. White Southerners that joined the Republican Party and helped the Reconstruction were called Scalawags.
4. The national debate over the Reconstruction began during the American Civil War.
5. The first comprehensive program was announced by then American President Abraham Lincoln – The Ten Percent Plan.
6. Abraham Lincoln was assassinated in April 1865.
7. All the former Confederate states by the year 1870 had been readmitted to the Union with nearly all being controlled by the Republican Party.
8. African Americans in every state formed the overwhelming majority of Southern Republican voters.
9. During the Reconstruction, sixteen African Americans served in Congress.
10. President Andrew Johnson offered the greatest resistance to Reconstruction. 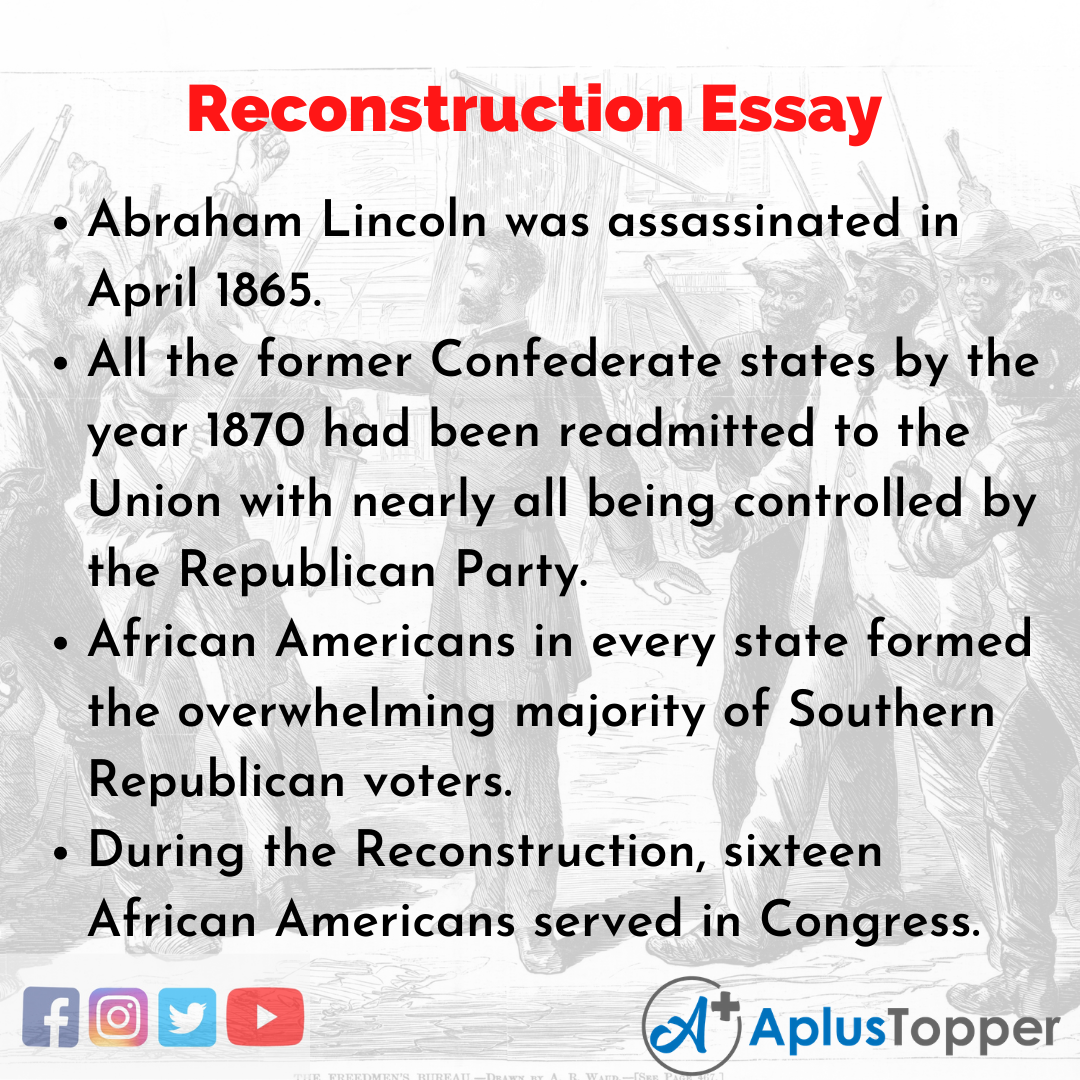 Question 1.
Who opposed the Reconstruction?

Answer:
Radical Republicans opposed Lincoln’s Reconstruction plan as the plan did not ensure equal civil rights for the freed slaves.

Question 2.
How did South Carolina change during Reconstruction?

Answer:
South Carolina underwent Reconstruction from 1865 to 1877. The Civilian Government was shut down by Congress in 1867, put the army to charge, the freed slaves were given the vote and ex-Confederates were prevented from holding office.

Answer:
The plan was implemented in 1865 that gave the South white a free hand in regulating the transition from slavery to freedom, and no political roles were offered to the black of the South.

Question 4.
What were the results of Reconstruction?

Answer:
The “Reconstruction Amendments” that were passed by Congress between the years 1865 to 1870 helped in abolishing slavery, black Americans were given equal protection under the law, and the black men were granted suffrage.