PTSD Essay: Post Traumatic Stress Disorder (PTSD) is a mental disorder characterized by failure to recover a witnessing or experiencing a terrifying event. The condition can last for months and sometimes even years.

A person who has PTSD, when exposed to triggers that can bring back memories of the traumatic experience – is accompanied by an intense emotional and physical reaction. Treatment of PTSD includes various types of psychotherapy, along with medications to manage the symptoms.

We provide students with essay samples on a long essay of 500 words and a short essay of 150 words on the topic of PTSD for reference.

Post Traumatic Stress Disorder (PTSD) is a mental disorder developed after a person is exposed to traumatic events such as sexual assault, child abuse, warfare, traffic collision, or any other threat to the person’s life.

It is natural to feel scared during and after a traumatic event. The trauma and fear trigger many split-second changes in the person’s body to help avoid it or defend against it – an increase in the flight or fight response. It also alters how a person thinks or feels. A person with PTSD often relives the traumatic experience through nightmares and flashbacks and experiences the feeling of isolation, guilt, and irritability. They also experience disturbing thoughts and feelings, mental or physical distress, due to any trauma-related signs.

Symptoms often become severe and persistent enough, having a significant impact on a person’s day-to-day life. These symptoms usually last for more than a month after the event; however, people experience them for years in extreme cases. Symptoms of PTSD mostly begin early – within three months of the traumatic experience. However, sometimes they even begin years afterward. Any situation that a person finds traumatic can cause PTSD. However, most people who experience traumatic events do not develop PTSD. It has been estimated that 1 in every 3 people who have had a traumatic experience have developed PTSD. However, it is not clear why some people develop the condition, and some don’t.

Any person can develop PTSD at any age, including children, teenagers, war veterans, and individuals who have been through physical or sexual abuse, assault, disaster, accident, or other serious events. The National Center for PTSD estimated that around 7 or 8 individuals out of every 100 people at some point in their lives would experience PTSD.

People who experience traumatic situations repeatedly, such as abuse or violence or severe neglect, may be diagnosed with complex PTSD. Complex PTSD is most likely to have similar symptoms as PTSD and may not be developed until years after the experience. Children are less likely to be developing PTSD after trauma – especially the kids under the age of ten.

Post Traumatic Stress Disorder can disrupt the affected person’s entire life – their relationships, jobs, health, and enjoyment of everyday activities. Developing PTSD may increase the risk of other mental health problems such as depression and anxiety, eating disorders, drug or alcohol abuse, and even suicidal thoughts. PTSD can be successfully treated even if it is developed many years after the traumatic event. Any treatment depends on how soon the symptoms appear after the event and their severity.

The main treatment of a person who has PTSD is psychotherapy, medications, or sometimes even both. Every individual is different, and everyone’s response to trauma is different. Post Traumatic Stress Disorder affects every person differently; hence the treatment that works for one person may or may not work for another. If a person with PTSD goes through any on-going trauma such as an abusive relationship, both the problems should be addressed. Other types of on-going problems may include panic disorders, anxiety disorders, substance abuse, and feeling suicidal. 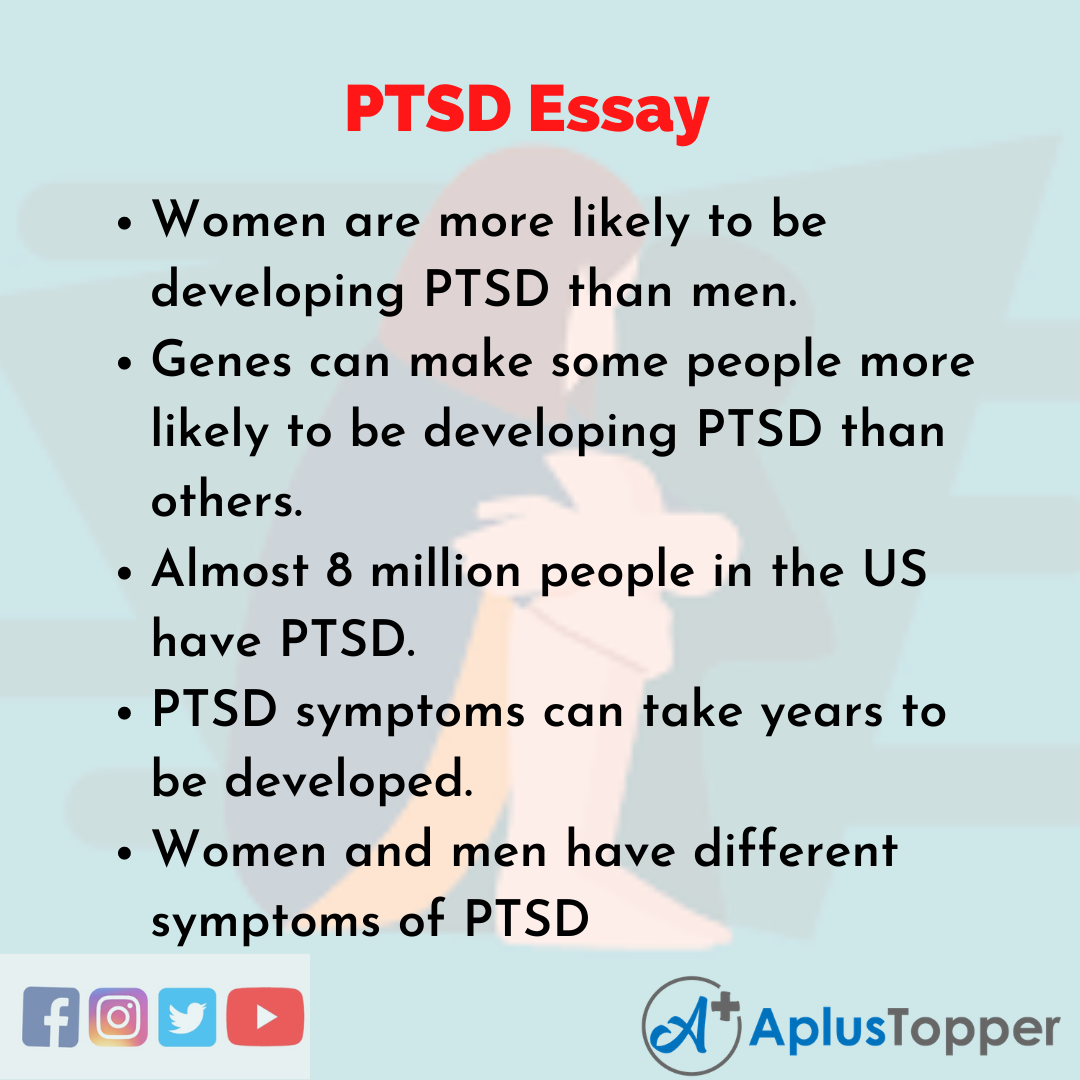 A psychiatric disorder, Post Traumatic Stress Disorder (PTSD), may occur in people who have witnessed or experienced any traumatic events such as natural disaster, an act of terrorism, war or combat, a serious accident, or rape or people being threatened with sexual assault, death, violence or serious injury.

The diagnosis of PTSD needs the person to be exposed to an upsetting event. However, the exposure could be done indirectly rather than first handed. PTSD can be completely treated by various methods such as psychotherapy or medication.

10 Lines on PTSD in English 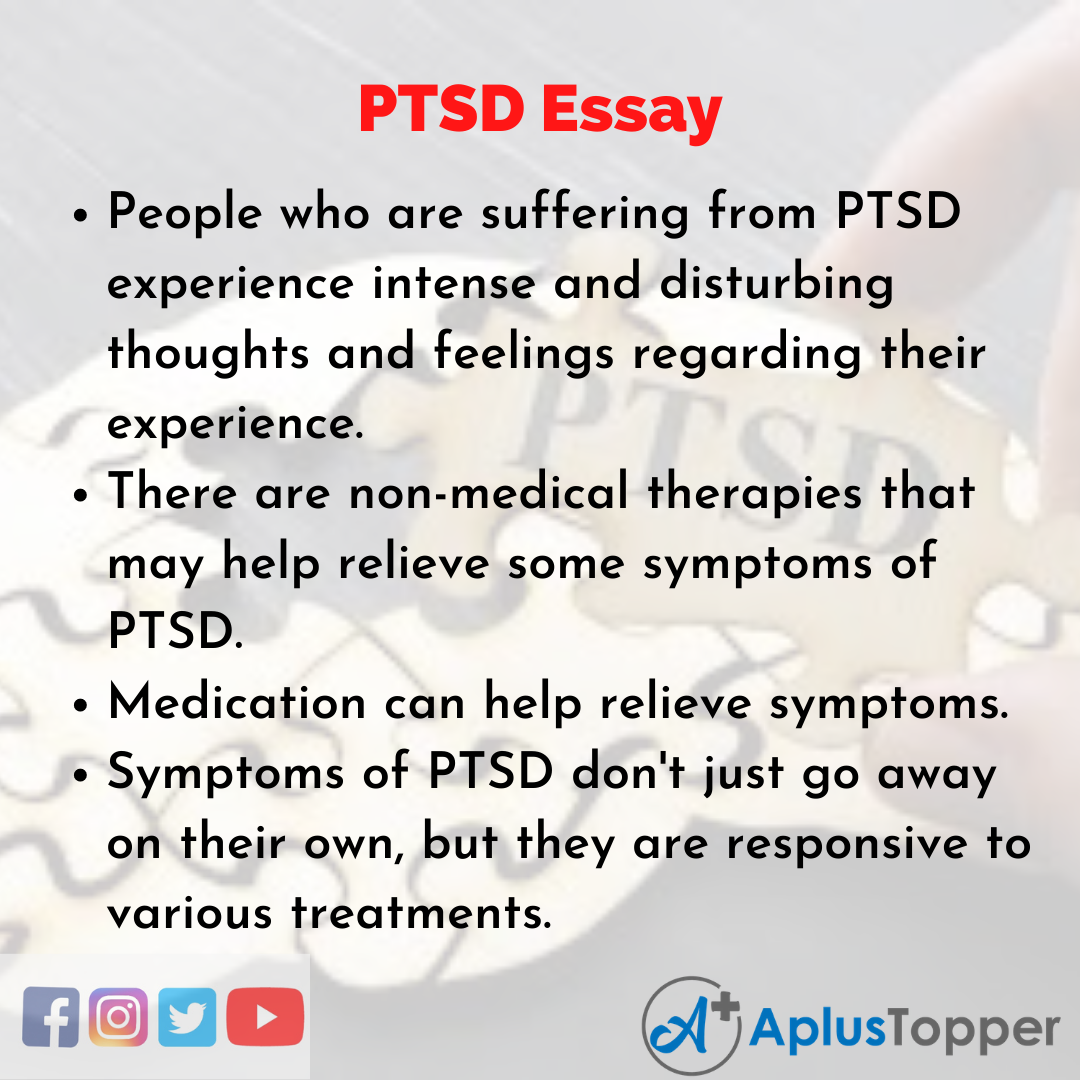 Question 1.
Can PTSD make anyone crazy?

Answer:
Adults who have PTSD sometimes experience the feeling of ‘going crazing’ or ‘broken’ after a trauma.

Question 2.
Is everyone developing PTSD a trauma event?

Answer:
Not everyone who develops PTSD is necessarily a trauma victim; sometimes, it can also be developed when someone close goes through a traumatic experience or losing a loved one.

Answer:
Children can develop PTSD as well, which for many, comes from neglect or abuse.