Pro Life Essay: Prolife is a social and political stand, sometimes also termed as a movement, that primarily opposes the legalization of euthanasia or abortion. Prolife believers believe in the concept of Right to Life that states that a being has the right to live and should not be killed before birth by another entity, including the mother of the child as well as the government.

However, believers of Prolife do not extend this concept to all victims like war criminals, capital punishments, etc. that are otherwise included in the concept. Prolife supporters face significant social and political opposition by Prochoice supporters who support the right to abort.

We are providing students with essay samples on a long essay of 500 words and a short essay of 150 words on the topic Prolife for reference.

Mostly, supporters of Prolife are mainly concerned with the survival of the fertilized egg, embryo, or fetus. In most cases, they are not worried about the life of the women with pregnancies or the life of the child after childbirth.

Many experts consider the Prolife movement as unjustified due to their specific consideration of the survival of the child without putting any concern about the type of life or upbringing that child may get after birth. This is further aggravated by the fact that many supporters of the prolife movement also support capital punishment while opposing child welfare legalization.

It is a raging movement in the United States since the 2016 presidential candidate Donald Trump’s controversial statement that if abortions are made illegal, then women who had abortions should be punished. This led to a raging national and global debate about the prolife movement and their unsolicited participation to dictate terms involving women’s bodies and their choice to abort.

It is a two-centuries-old belief system that focuses on the fetal life and its survival while avoiding the broader contexts or concerns like what kind of life will the child face upon birth and the number of facilities available to the child for his/ her upbringing. This lack of context has often made the prolife movement irrelevant in respective points of history apart from authoritarian government systems that generally tend to limit female freedom.

The key elements of the opposition are based mainly on the idea that the mother or the government should not be allowed to abort a pregnancy leading to the eventual safeguarding of the human zygote. Their essential opposition includes the abortion rights movement that has consistently been vocal about a woman’s right to abort a fetus if the case is justified under certain predefined and properly-recognized circumstances.

The movement gained a significant supporter base and traction with the rise of movements to liberalize abortion laws in Europe and the United States as a part of the second-wave feminist movement. The anti-abortion stance was then adopted to justify the saving of an affected human zygote, restricting all types of access to eliminate the same. The anti-abortion and prolife movements are dominated by a variety of far-right and socially conservative organizations that involve a large section of the conservative section of the populace.

Many countries, especially in the middle-east, have seen a prolife based stance of the governments that tend to severely limit the freedom of the women living in these countries. These are added with other restrictive laws like banning from driving, burkha laws, etc.

In western nations, the prolife stance revolves around the fact that any life is important from fertilization/ implantation until death due to natural causes. However, it contains no elements on the possible quality of upbringing or life or even civil liberties. 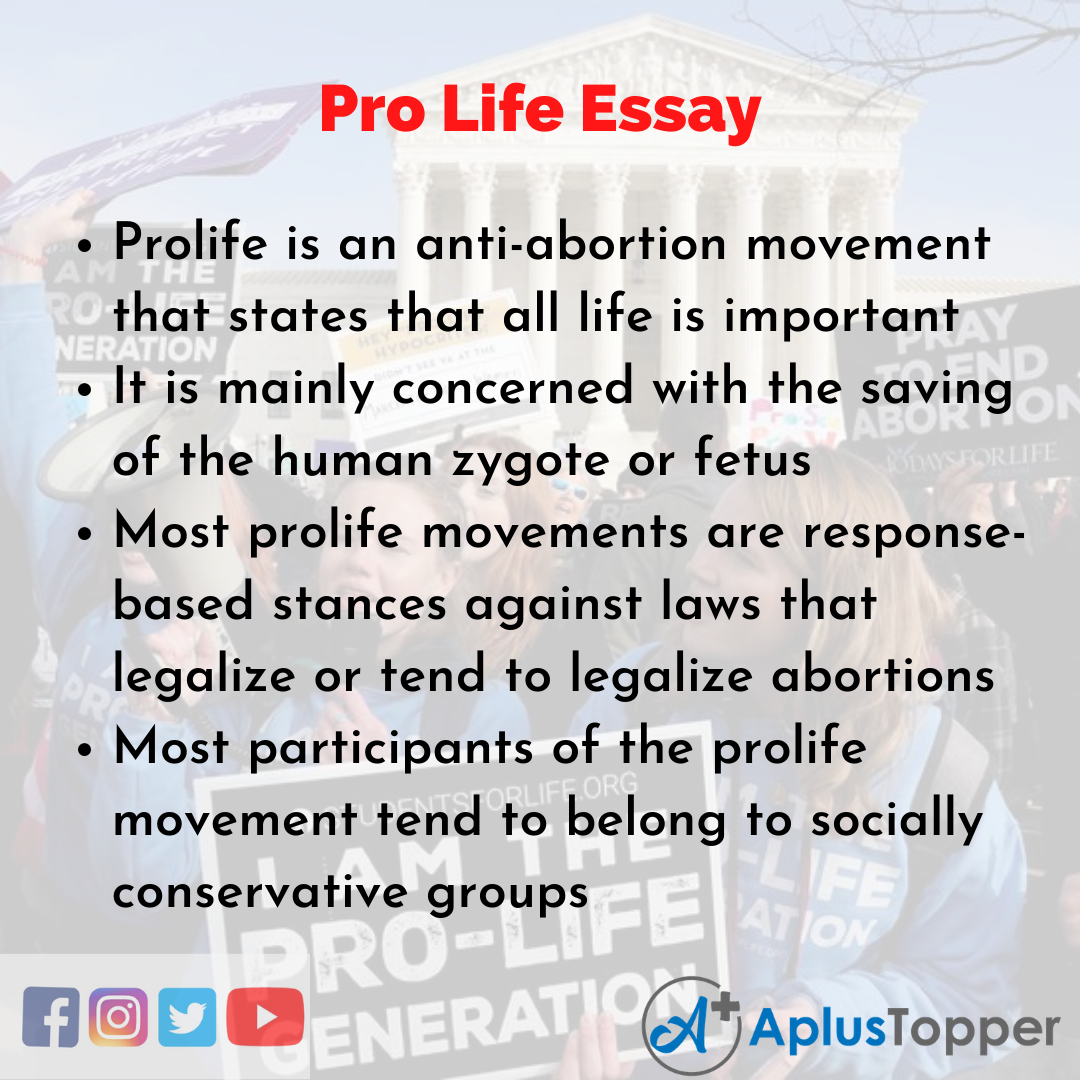 Prolife is the social and political stance taken by primary members of conservative and other right-aligned groups that oppose laws that attempt to legalize abortion. It is sometimes defined as an anti-abortion movement in response to feminist movements trying to legalize abortions. Participants of the Prolife movement aim to stop the destruction or mutilation of the human zygote, stating the belief that all life is important right from fertilization until natural death.

It also enables individuals and groups to focus on the effective elimination of all laws that legalize abortion and tend to give freer to women’s choice with their bodies. It is sometimes also termed as a patriarchal movement that attempts to reassert male political dominance over the free will of women and their bodies.

It is extremely prevalent in some western countries with right-aligned governments in power that generally tend to have a prolife stance. Recent examples of Poland that has tried to criminalize abortion leading to widespread protests and revolution by Polish women against the government is a perfect example of such a scenario.

1. Prolife is an anti-abortion movement that states that all life is important
2. It is mainly concerned with the saving of the human zygote or fetus
3. Most prolife movements are response-based stances against laws that legalize or tend to legalize abortions
4. Most participants of the prolife movement tend to belong to socially conservative groups
5. The United States and Some European Countries have raging prolife movements along with significant resistance from feminist groups
6. Some conservative Christian groups also have a prolife stance stating medieval Christian laws as justification
7. American President Donald Trump is considered to be a vocal supporter of the prolife movement
8. Most prolife movement members are not concerned with the upbringing or quality of life of the child after birth or the health of the pregnant women
9. Certain prolife public movements have used graphical images of aborted fetuses to aware the public of the impact of abortions
10. United States of America and Some East European countries face regular demonstrations by prolife movements every year, especially in front of the facilities that conduct abortions. Question 1.
What is Prolife?

Answer:
Prolife or Prolife movement is a socio-political stand that opposes abortion laws that legalize the act of abortion

Question 2.
What country has the highest number of Prolife movements?

Answer:
The United States of America has the largest number of Prolife movements as of 2019

Question 3.
What is right-to-life?

Answer:
The right-to-life is a social definition or the reason given by prolife movements to justify their stand. It states that all lives are important from fertilization and should not be eliminated by the involved members giving birth or even the government. However, this belief does not extend the capital punishments, death during war or violence, criminal murders, etc.