The story of the novel Pride and Prejudice follows the character development of the protagonist named Elizabeth Bennet. Through the plot, the protagonists, as well as the readers, learn the consequence of making rushed judgments. And the readers also understand the difference between apparent goodness and genuine goodness.

Long Essay on Pride and Prejudice 500 Words in English

Famous English novelist Jane Austen wrote Pride and Prejudice to portray the story of ordinary human life in times of Regency Era. The book was initially named ‘First Impressions’ for then the title would have conveyed one of the main themes of the story, i.e. first impressions can be deceiving. From the first line of the story to the very last, the writer has stressed on how inappropriate it is to judge a person on their first acquaintance.

The plot of the novel is set in rural England of the 19th century, where our female protagonist lives with her family, ‘The Bennet family. The Bennet family includes five very different daughters, namely Jane, Elizabeth (Lizzie or Eliza), Mary, Catherine (Kitty), and Lydia.

From the beginning of the story, it is very prominent that Mrs.Bennet is anxious about marrying off all her daughters to suitable suitors. The reason behind her anxiousness is the law that prohibits women from inheriting their parents’ estate. Thus after Mr.Bennet dies, the family estate would be inherited by William Collins.

Things take a good turn when the Bennet family hears the news of the Maryton ball that an eligible bachelor named Mr.Bingley and his friend named Mr.Darcy (both with great inheritance) was going to attend. The newly arrived Charles Bingley was immediately attracted to the oldest Bennet daughter, the beautiful and shy Jane Bennet. However, the encounter between Elizabeth Bennet and Mr.Darcy was less pleasant.

Although Austen doesn’t fail to express that both characters are intrigued by each other, but both their first impressions give readers the sense of Darcy’s pride of fortune and social rank against Elizabeth’s prejudice of social inferiority. Or readers could have also deciphered the incident as Elizabeth’s pride of self-respect and prejudice against the snobbery of Mr.Darcy.

Soon after, the pompous cousin, Mr.Collins arrive at their house intending to marry one of the Bennet sisters. Jane was kept off the hook because Mr.Bingley fancied her much. Since Elizabeth was the next in line, Mrs.Bennet tried to compel her for marrying Collins.

Elizabeth refused to the marriage proposal offered by Collins. After that Collin proposed to Elizabeth’s best friend, Charlotte Lucas and she accepted. One of the most discomforting unions in Austen’s story was that of Ms.Lucas and Mr.Collins. Austen portrayed the cruelness of society as to the impossible position in which society puts women.

Charlotte Lucas confessed that she neither loved nor very much liked Mr.Collins, but it was solely his stable source of income and social rank that could have provided her with a comfortable life. Since Charlotte was six years older than Elizabeth with no other suitors, it was better to accept Collins’ proposal than end up being a spinster with almost no significant position in society.

Meanwhile, Elizabeth encounters a charming military officer named George Wickham, and a mutual attraction was observed between the two. Wickham told Elizabeth that Darcy was the reason he was denied his rightful inheritance. Soon later, Bingley along with Darcy abruptly departs to London, and this news left Jane devasted. Elizabeth’s dislike of Darcy grows as she was convinced it was him who was behind discouraging Bingley’s and Jane’s relationship.

However, Darcy by then had grown increasingly fond of Elizabeth because of her intelligence and vitality. Towards the ends of the story, Elizabeth begins to see Darcy in a new light, as she after reading Darcy’s letter learns about the reasons behind Darcy’s actions and the truth about Wickham. The plot ends with a romantic happy ending that leaves the readers like we mesmerized and in peace. 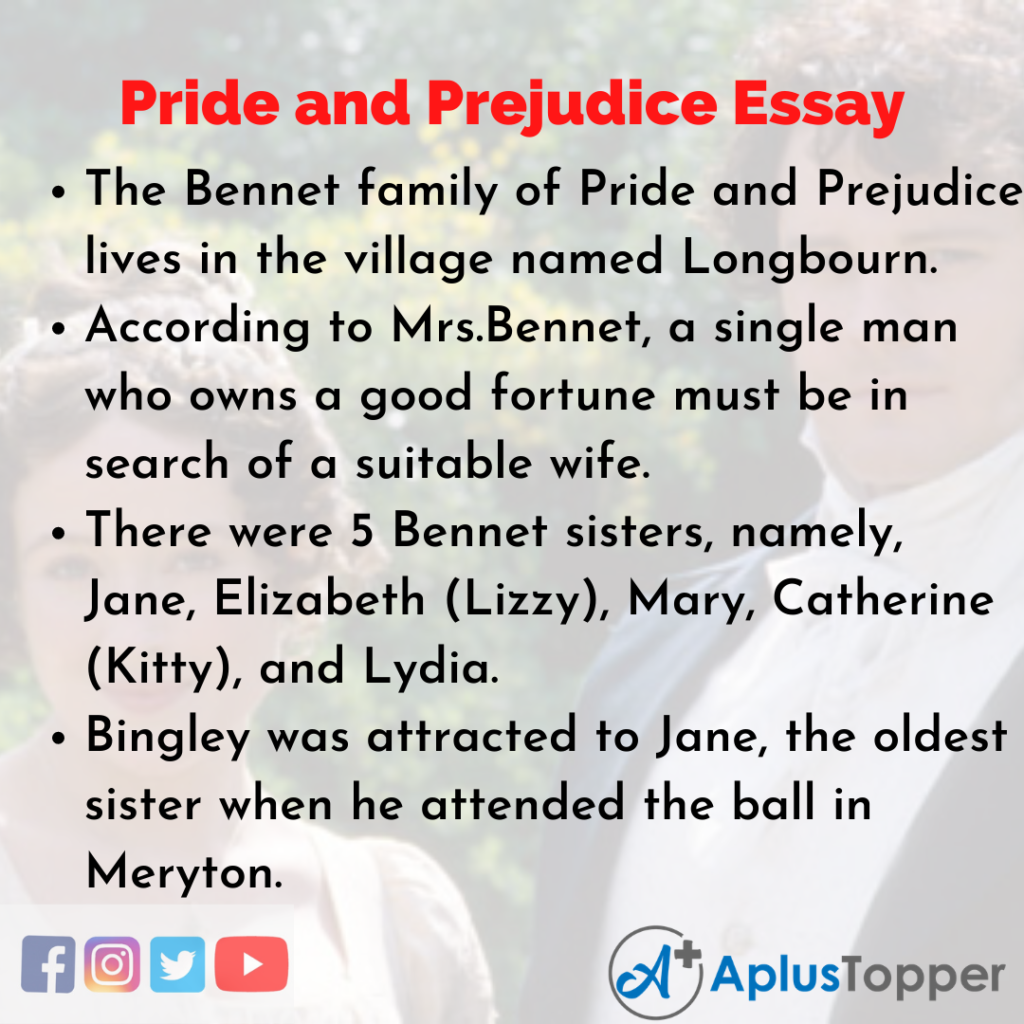 Short Essay on Pride and Prejudice 150 Words in English

One of the most famous Jane Austen’s novels, named Pride and Prejudice, was first printed in 1813. During this period, in Britain, the family relationships were overseen by firm societal regulations.

The role of women and men were prominent and defined, and especially in case of a wealthy family, great effort was given on maintaining financial security and decent respectability.

The subject of Pride and Prejudice deals with the topics related to love and marriage at that time. The novel explores both the pressures faced by the different characters to behave in particular traditional ways and the diverse choices which are open to the characters.

Among literary scholars and the readers, Pride and Prejudice has appeared continuously at the top of the list of most-loved books. Many reprints, films, dramatic adaptations and unofficial sequels of Pride and Prejudice have portrayed all the memorable characters and theme of the plot for many centuries which have reached mass audiences.

10 Lines on Pride and Prejudice Essay in English

1. The Bennet family of Pride and Prejudice lives in the village named Longbourn.
2. According to Mrs.Bennet, a single man who owns a good fortune must be in search of a suitable wife.
3. There were 5 Bennet sisters, namely, Jane, Elizabeth (Lizzy), Mary, Catherine (Kitty), and Lydia.
4. Bingley was attracted to Jane, the oldest sister when he attended the ball in Meryton.
5. Darcy offended Miss Elizabeth Bennet in the Meryton ball by refusing to dance with her.
6. In the story Pride and Prejudice, the protagonist had a best friend named Charlotte Lucas.
7. Jane Bennet ended up prolonging her stay at the Bingley’s after she got soaked in the rain during the journey.
8. After being turned down by Elizabeth, Mr.Collins ended up marrying her best friend, Miss Lucas.
9. Lady Catherine de Bourgh forbid Elizabeth to marry Mr.Darcy because she was his aunt and planned on marrying her daughter off with him.
10. The novel has a happy ending with Jane marrying Mr.Bingley and Elizabeth marrying Mr.Darcy. 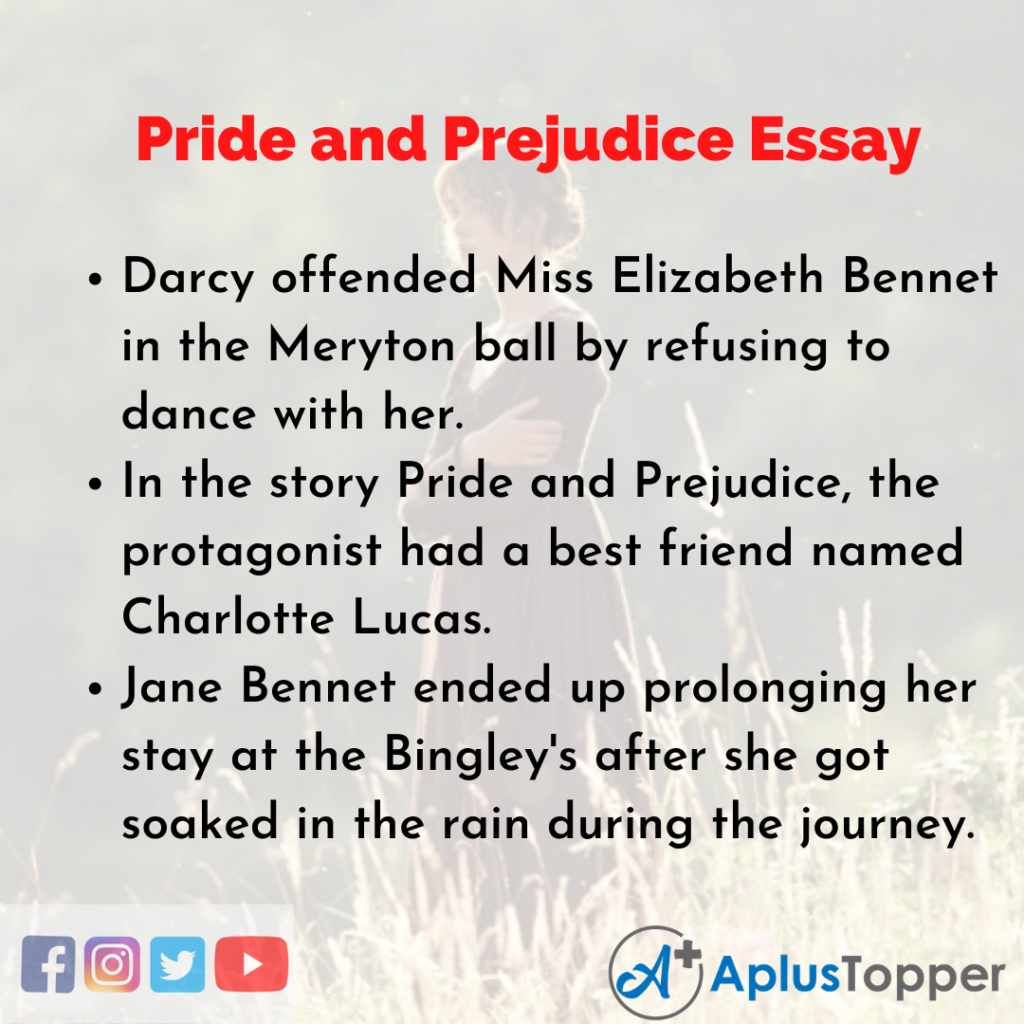 FAQ’s on Pride and Prejudice Essay

Question 1.
What lie did Mr.Wickham tell Miss Elizabeth about Mr.Darcy?

Answer:
Mr.Wickham told Elizabeth that Mr.Darcy cheated him out of the inheritance sum he was supposed to get, but readers will later in the story get to know that this was a lie.

Question 3.
What was the reason behind Miss Bingley disliking Elizabeth Bennet?

Answer:
Miss Bingley was afraid and jealous of Mr.Darcy’s growing interested and attraction towards Elizabeth.

Question 4.
What was wrong with the first proposal that Mr.Darcy made to Elizabeth?

Answer:
The first proposal that Mr.Darcy made to Ms.Elizabeth was filled with him ranting about their unsuitable match as per societal standards.

Question 5.
At which point of the story, did Elizabeth’s feelings start changing towards Mr.Darcy?

Answer:
After Elizabeth read the letter written by Mr.Darcy and understood the reasons behind his actions, her feelings towards him changed.