Prevention of Global Warming Essay: The increase in the average temperature of the earth due to the accumulation of gases like carbon dioxide is usually referred to as global warming. Both man-made and natural disasters can be the causes of global warming. Events like deforestation, agriculture, wars, floods and industrialization are a few reasons for global warming. The global warming at the end of the century will lead to an increase of 2.8-degree Celsius temperature.

Prevention of Global Warming Essay is usually given to classes 7, 8, 9, and 10.

Global Warming is one of the biggest man-made disasters in the world that is giving rise to other disasters like floods and famine. There are various reasons for global warming, some of which are agriculture expansion, industrialization, globalization, deforestation, increase in carbon footprint to name a few. If the international community does not come together and take necessary action, the world as we know it will come to an end one fine day. In this prevention of global warming essay in English, we are going to discuss both the effects of global warming as well as the remedies that countries should take to prevent further deterioration of the situation concerning global warming.

What are the effects of global warming?

The following are the main effects of global warming: The increase in earth’s temperature has given rise to the melting of polar ice caps. This melting of polar ice caps will flood our water bodies with water beyond its capacity resulting in massive floods that can destroy life and properties in various countries. The biggest reason for floods that are already happening in many countries is global warming. The economic cost of this is estimated to be in billions of dollars.

Settlements, agricultural lands and important natural resources, not to forget the wildlife, will be under huge threat if floods are not controlled. And another big destruction that the floods cause is destroying forests. As it is man has been conducting deforestation drives at a massive rate, if floods also destroy forests, that will add to the increasing trouble of global warming, because forests, called as the lungs of the earth, are the main source of oxygen. This will result in an increase in carbon dioxide and at the same time decrease in oxygen levels in the atmosphere.

What are the causes of global warming?

The following are considered to be important causes of global warming

How to prevent global warming?

The following are some of the ways to prevent global warming

In this prevention of global warming essay, we have tried to cover the causes, effects and preventive measure for global warming. Not every measure mentioned can be implemented easily. Global warming is an international issue and countries should not be selfish in the usage of its natural resources. The international community should come forward and find a lasting solution to the problem of global warming so that we leave back a healthy planet to the next generation. 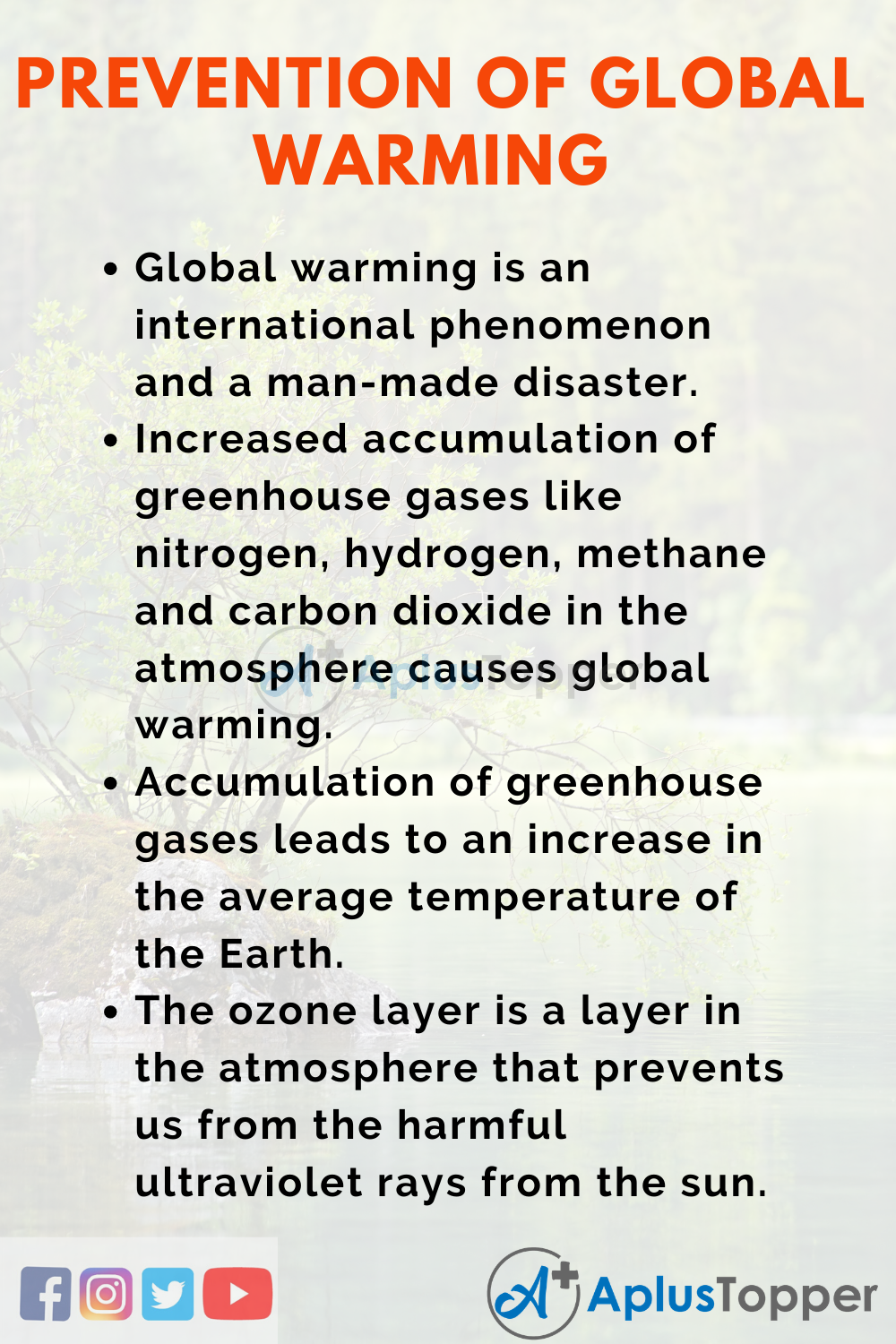 Short Essay on Prevention of Global warming 200 Words in English

Global warming is an international phenomenon where the average temperature of the earth is increasing rapidly. This is due to the accumulation of greenhouse gases such as carbon dioxide, nitrogen and methane. These are harmful gases in the atmosphere that is harming human and animal lives. Global warming has catastrophic effects across all the chains in our food cycle. From affecting the agricultural cycle to the water cycle, global warming, if not prevented now, will lead to unimaginable disasters in the future where the future generation has to suffer because of our irresponsibility.

There are many preventive measures that can be taken to prevent global warming. Some of which can be educating farmers to follow healthy agricultural practices, put a curb of destroying our forest covers, business houses must be made responsible for the carbon emission they cause, alternative forms of energy should be used such as wind energy, hydro energy or nuclear energy. Developed countries emit more greenhouse gases than poorer countries. Hence high amounts of responsibilities lie with countries like the USA or the UK or China. All countries should come forward to reduce the carbon footprint in their land to prevent global warming in their own capacities.

10 Lines on Prevention of Global Warming Essay in English 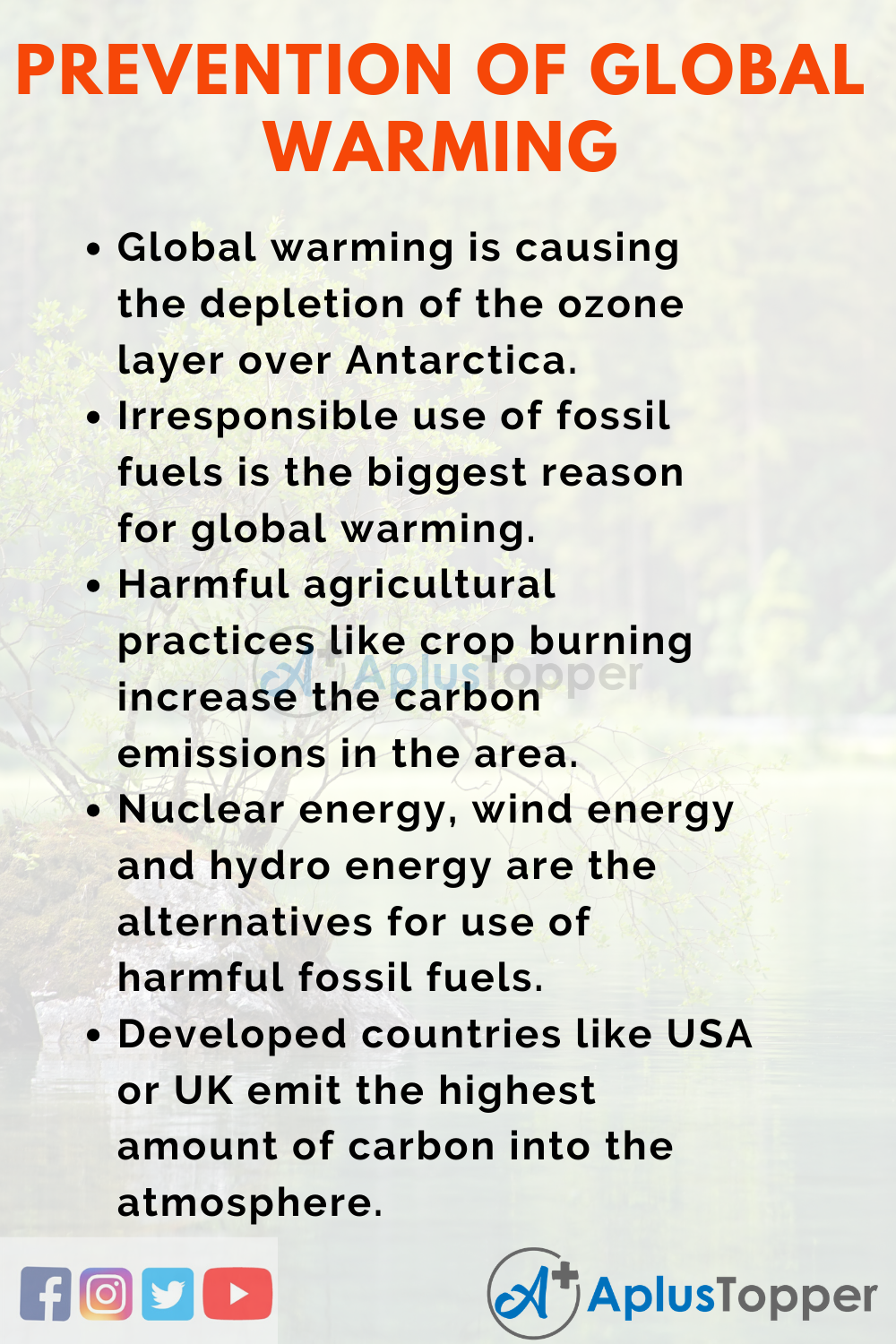 Question 1.
What is global warming?

Answer:
Increase in the average temperature of the earth due to increasing greenhouse gases in the atmosphere is called global warming

Question 2.
How to prevent global warming?

Question 3.
What are the alternative forms of green energy in the world?

Question 4.
Which was the first climate change summit?