Pradhan Mantri Jan Dhan Yojana essay is usually given to classes 7, 8, 9, and 10.

The Jan Dhan Yojana was mainly launched to inspire people from the weaker sections of the society to open bank accounts. Under this scheme, approximately 15 million bank accounts were opened on the day of inauguration.

The main objective behind starting the scheme was to help rural women and uplift them. The concept of opening bank accounts and saving money is alien to those living in rural areas.

The main aim was to engage them in making investments and save their hard-earned money for future use. Kerala and Goa were the first states to provide at least one bank account to each family.

India is a country where the rural population exceeds the urban population. But, even in today’s digitized and advanced world, there are individual modern facilities which are still not available to the rural people. Bank accounts and insurances, along with savings, are significant for them in cases of natural calamities. Destructive cyclones and floods often hit the rural population and cause enormous loss of life and property.

The Jan Dhan Yojana scheme has been successful in providing some relief to these poverty-stricken areas. The program also has a social perspective. Indian villages and the people living there have not yet experienced education on a large scale. The light of knowledge is, however, to penetrate their minds, and thus they are prejudiced by other, meager concepts. They face discrimination and casteism because of their lack of education.

Education requires monetary support, and the Jan Dhan Yojana helps people invest their money intelligently. A major problem of rural areas is the wasteful expenditure people undertake due to lack of planning. It is often seen that the woman in the family works day and night to earn their livelihood, and the man forcefully spends all the money on alcohol or other drugs. Thus, the Jan Dhan Yojana dramatically helps them to keep the money safe in banks.

The objective of the scheme is definitely beyond financial gain. Not only does the project encourages rural people to keep their money secure, but it also instills self-confidence in them. This advancement in agricultural standards has made them a part of the urban mainstream society. The scheme inspires rural people to assimilate into mainstream society and feel at par with them. The project gives people a chance to live a comfortable and secure life.

Another primary objective of the Jan Dhan Yojana is to make the rural population independent. Rural people have always been much dependent on cruel money lenders who have exploited them. The Jan Dhan Yojana saves the villagers the immense suffering of asking moneylenders for loans. The crop insurances and other safety measures to save their money have protected them from such exploitation.

Jan Dhan Yojana benefits is an outstanding attempt made by the Government of India to better rural life. It helps to make people independent and save their money for times of need. It is indeed a brilliant way to make rural people more modern. 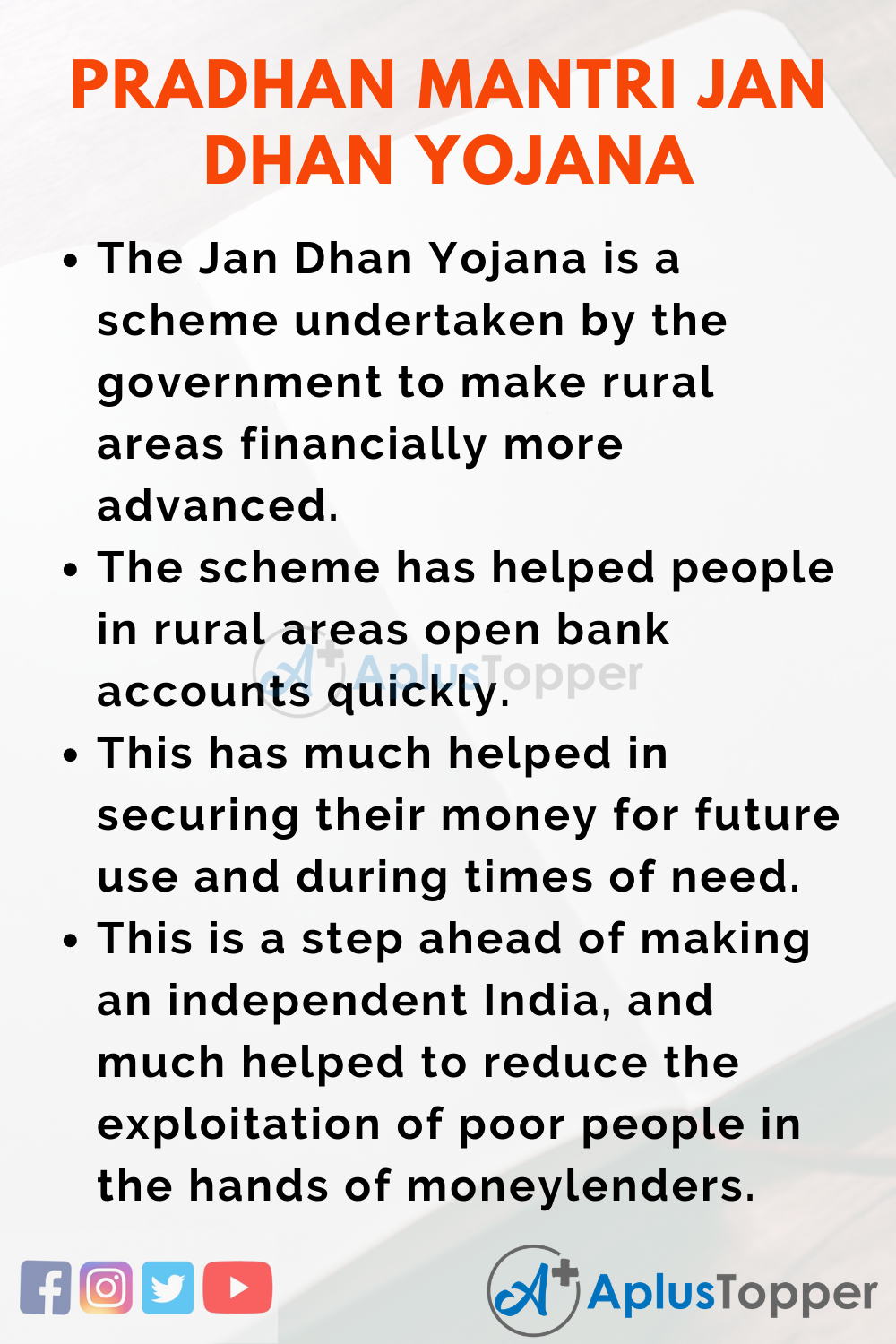 The Jan Dhan Yojana is vital on many levels.

It has much helped in improving rural standards of living. Moreover, holding a bank account, checkbook facility, and debit card facility helps them to access modern ways of financial planning. They learn how to sign insurances for their property, and thus, their assets remain protected by banks and insurance companies.

However, the scheme has faced specific criticisms too. Opposition parties have often accused the government of using such tactics to gain more votes. The system is criticized for being a part of vote bank politics, and opposition claims that the scheme increases the workload on local banks. we will soonly update Jan Dhan Yojana essay in Hindi, Telugu, English. 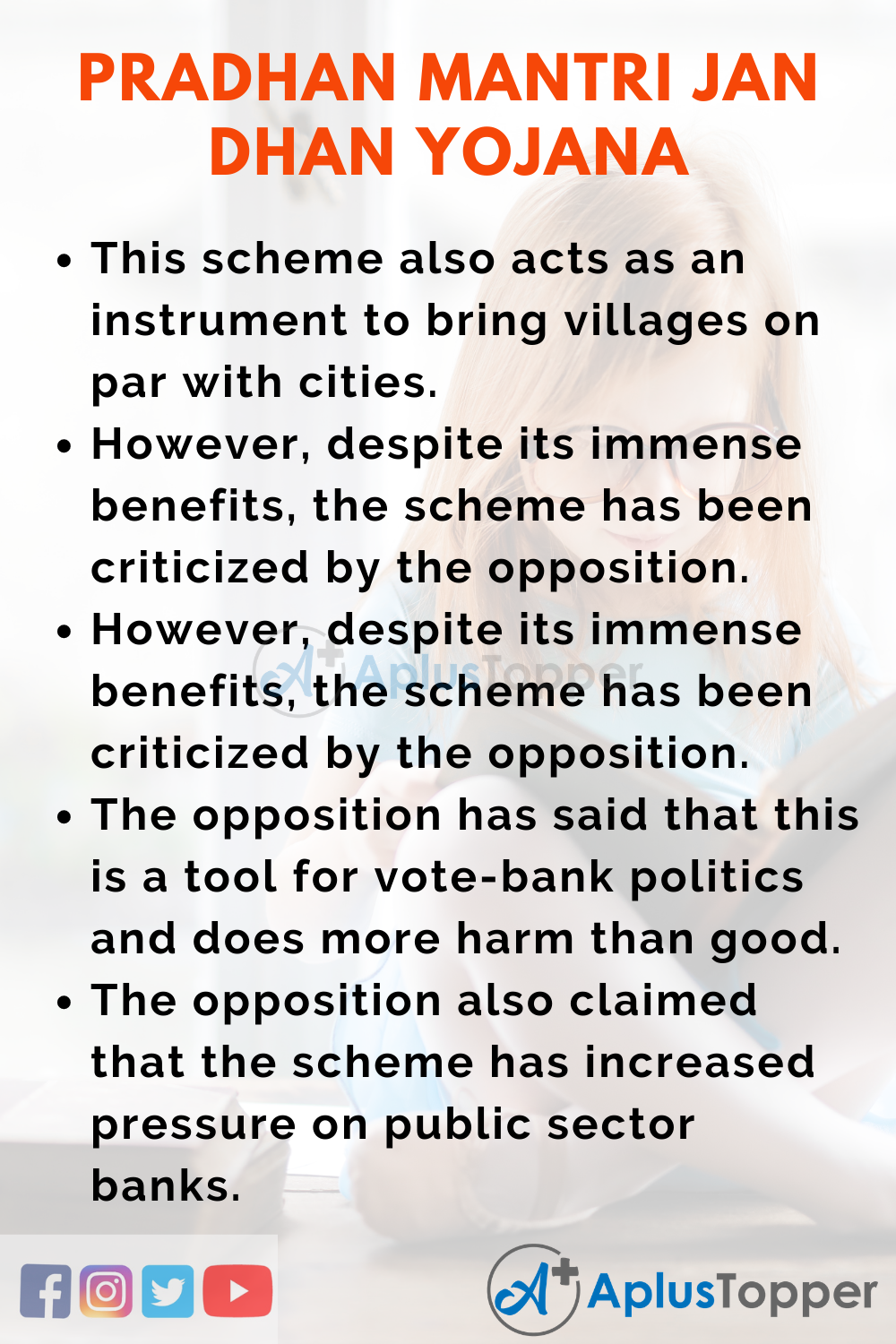 Question 1.
What is the importance of Pradhan Mantri Jan Dhan Yojana?

Answer:
The scheme much helped in extending financial benefits to poor, rural people and made them independent.

Answer:
The Jan Dhan Yojna helps people to open bank accounts and keep their money safely in banks, to be used in times of need.

Question 3.
What are the benefits of Pradhan Mantri Jan Dhan Yojana?

Answer:
The scheme benefits people to get the rights to open a bank account with no minimum balance. The report can be opened with zero balance.

Question 4.
Why is the Jan Dhan Yojana criticized?

Answer:
The Jan Dhan Yojna is criticized on the grounds of being a tool of vote bank politics and for burdening the public sector banks.