Question 2.
The milk produced during the initial few days of lactation is called …………
Answer:
Colostrum

Question 3.
Diagrammatic representation of the central dogma given below is not correct. Make necessary corrections and redraw it:

Question 5.
Observe the figure given below:

Analogous organs:
e) Eye of the octopus and mammals.
f) Flippers of penguins and dolphins.
b) Wings of butterfly, bird

Question 7.
“The sex of the baby is determined by the father and not by the mother.” Do you agree with this statement? Substantiate your answer.
Answer:
yes.
In case the ovum fertilises with a sperm carrying X chromosome the zygote develops into a female (XX) and with Y-chromosome results into a male offspring. Thus the genetic makeup of the sperm that determines the sex of the child.

Question 9.
Observe the diagram given below showing the sectional view of the female reproductive system and name the parts labelled ‘A’, ‘B’, ‘C’ & ‘D’. 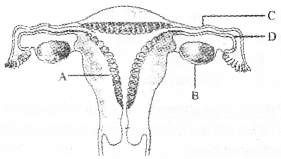 Question 10.
Microbes are useful to human beings in diverse ways. If so, name the following:
a) Microbe known as ‘‘Baker’s Yeast”.
b) Lactic acid producing bacterium.
c) Fungus which helps in the production of bio-active molecule – cyclosporine A.
d) Symbiotic nitrogen fixing bacterium.
Answer:
A – Saccharomyces
B – Lactobacillus
C – Trichoderma
D – rhizobium

Question 11.
Complete the flow chart given below: 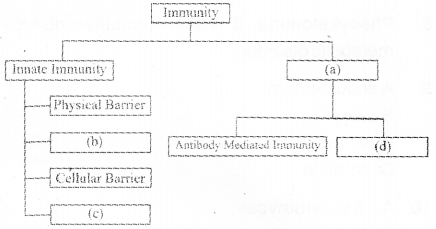 Question 14.
List of some diseases commonly occurring in man are given below. Arrange them based on causative organism in the table.
Malaria, Common cold, Filariasis, Typhoid, Ascariasis, Ringworms, Amoebiadid, Pneumonia

Question 15.
The amino acid composition of the relevant portion of β chain of two hemoglobin molecules (A & B) are shown below:

a) Which one of the polypeptide chain is abnormal?
b) Name the disorder caused by it.
c) What is the reason for this abnormality?
d) What is the effect of this abnormality in such individuals?
Answer:
a) B
b) Sickle cell anemia
c) Substitution of glutamic acid by valine.
d) The mutant hemoglobin molecule under low oxygen tension causing the change in the shape of the RBC from biconcave disc to elongated sickle like structure.

Question 16.
The diagrammatic representation of the DNA fingerprint from a crime scene and that of a suspected persons are given below: 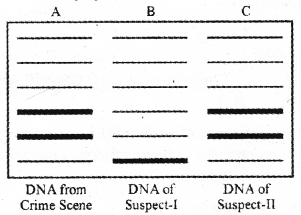 a) What is your conclusion about the suspects based on DNA Fingerprint given?
b) What is VNTR?
c) Who developed this technique first?
Answer:
a) The DNA finger print of suspect II matches with DNA from the crime scene. So suspect II is identified as culprit.
b) variable number tandem repeats
c) Alec Jeffreys

Question 18.
The diagrammatic representation of a process in bacteria is given below: 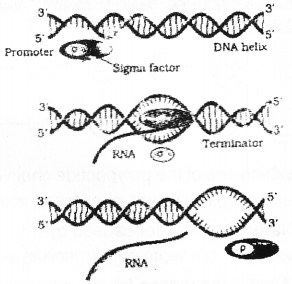 c) Initiation:
RNA polymerase binds to promoter and initiates transcription (Initiation).
Elongation:
It uses nucleoside triphosphates as substrate and polymerises in a template.
Termination:
Once the polymerases reaches the terminator region, the nascent RNA and RNA polymerase falls off. This results in termination of transcription.