Question 2.
Fill the columns A and B using the items given below: (MARCH-2010)

Question 3.
The diagrams shown below represents the operation of natural selection on different traits. Observe the diagrams and answer the following : (MAY-2010) a) Why graph C shows a marked difference from graph A.
b) What is the evolutionary significance of Direc-tional Selection ?
c) Mention the factors affecting gene frequency.
d) What is meant by founder effect?
Answer:
a) A is stabilizing selection and C is disruptive selection.
b) Peak shifted to one direction.
c) Gene migration
Genetic drift
Mutation
Genetic recombination
Natural selection
d) The effect where original drifted population becomes founders is called founder effect.

Question 4.
a) Arrange the given chemical compound in the sequential order as per the concept of origin of life. (Ammonia, Hydrogen, Protein, Nucleic acid, Amino acid) (MARCH-2011)
b) Correlate Miller’s experiment with this.
Answer:
a) Hydrogen -> Ammonia -> Amino acid -> Protein Nucleic acid
OR
b) Brief account of Miller’s Experiment / Labelled diagram of the experimental setup.

Question 5.
Note the relationship between the first pair and complete the second pair. (MARCH-2012)
a) Natural selection : Drawing ; Inheritance of acquired characters : ________.
b) Heart of vertebrates: homologous organs; Flippers of Penguin and Dolphin : _______.
Answer:
a) Lamarck
b) Analogous organs

Question 6.
An evolutionary process occurred in the evolution of marsupial mammals in Australia is given below. (MARCH-2012)

a) Name this evolutionary process.
b) Suggest another example for this phenomenon.
Answer:
a) Adaptive radiation
b) Darwins finches

Question 8.
Theory of chemical evolution is a version of theory of abiogenesis. Analyze the statement. (MARCH-2013)
Answer:
Oparin and Haldane proposed that the first form of life that arose from preexisting non-living organic molecules (e.g. RNA, protein, etc.) and it is followed by chemical evolution 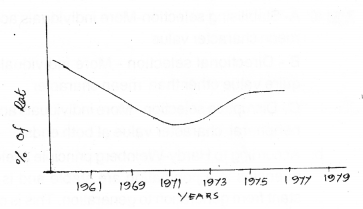 Resistance to poison is governed by a dominant autosomal gene ‘R’. In 1975 majority of the resistant animals are heterozygous at this locus (Rr).
a) What was the major genotype of the rat population before 1961 ?
(A) RR, (B) Rr, (C) rr, (D) R is absent as it is produced by a mutation.
b) What explanation you give for the development of resistance against poison in these rats?
c) This illustration can be utilized to explain a theory of Evolution” Substantiate.
Answer:
a) R is absent as it is produced by mutation
b) Mutation leads to genetic variation and which in turn lead to evolution
c) Evolution by anthropogenic action

Question 10.
Given below is the diagrammatic representation of the operation of Natural Selection on different traits. (MARCH-2014) 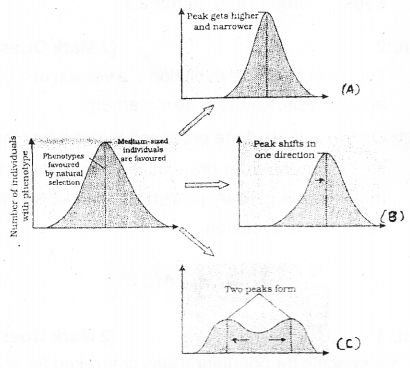 a) Identify the type of natural selection A, B and C with explanation of each.
b) Define Hardy – Weinberg Principle.
Answer:
a) A- Stabilising selection-More individuals acquire mean character value
B – Directional selection – More individuals ac-quire value other than mean character
C – Disruptive selection – More individuals acquire peripheral character value at both ends.
b) According to Hardy-Weinberg principle allele frequencies in a population are stable and is con-stant from generation to generation. This is called genetic equilibrium. Sum total of all the allelic frequencies is 1.
Hence,p2 + 2pq + q2 = 1 Disturbance in Hardy- Weinberg equilibrium, i.e., change of frequency of alleles in a population affected by five factors These are gene migration or gene flow, genetic drift, mutation, genetic recombination and natural selection.

Question 12.
a) The diagram given below shows a particular type of evolutionary process in Australian marsupials. Identify the’ evolutionary phenomenon and comment on. (MAY-2014)

b) Give another example for such a type of evolutionary process and explain.
Answer:
a) convergent evolution
Number of marsupials are different from the other evolved from an ancestral stock, but all within the Australian island continent. When more than one adaptive radiation appeared to have occurred in an isolated geographical area(representing different habitats), it is called as convergent evolution.
b) Placental mammals in Australia also exhibit adaptive radiation in evolving into varieties of such placental mammals each of which appears to be ‘similar’ to a corresponding marsupial (e.g., Placental wolf and Tasmanian wolf marsupial).

The above shown pictures are beaks of a particular type of bird seen in an island during Darwin’s journey.  (MARCH-2015)
a) Identify the bird and name the island.
b) Write the significance of this process in evolution.
Answer:
a) Darwin’s Finches, Galapagos Islands
b) From the original seed-eating features, many other forms with altered beaks arose, enabling them to become insectivorous and vegetarian finches.

Question 15.
Four groups of organs are given below:  (MAY-2015)
Read them carefully and answer the questions:
A. Thorns of bougainvilla and Tendrils of cucurbita
B. Eyes of octopus and mammals
C. Flippers of penguin and dolphin
D. Forelimbs of cheetah and man
(a) Categorise the four groups of organs as homologous organs and analogous organs.
(b) Based on each group of organs differentiate convergent evolution and divergent evolution.
(c) Illustrate homologous and analogous organs as evidences for evolution.
OR
Observe the diagrammatic representation and answer the questions: 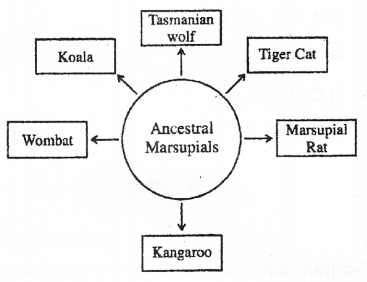 a) Explain the phenomenon shown in the figure.
b) How can it be considered as an evidence of evolution?
c) Write any other example for this phenomenon. Explain.
Answer:
a) Homologous organs
Thorns of bougainvilla and tendrils of cucurbits , fore limbs of cheetah and man Analogous organs: Eye of octopus and mammals, flippers of penguin and dolphin
b) Convergent evolution – different structures evolving for the same function
Divergent evolution – same structure developed for different function
c) In convergent evolution, the similar habitat that has resulted in selection of similar adaptive fea-tures in different groups of organisms but toward the same function:
In divergent evolution ,same structure developed along different directions due to adaptations to different needs
OR
a) Adaptive radiation
b) A number of marsupials, each different from the other evolved from an ancestral stock, but all within the Australian island continent. When more than one adaptive radiation appeared to have occurred in an isolated geographical area (representing different habitats), it represents convergent evolution.
c) Darwin’s finches represent one of the best examples of this phenomenon. From the original seed-eating features, many other forms with altered beaks arose, it helps them to become insectivorous and vegetarian finches.

Question 16.
Which theory talks about the huge explosion that leads to origin of universe?  (MARCH-2016)
Answer:
Big Bang theory

Question 17.
Read the principle and answer the questions: “Allele frequencies in a population are stable and constant from generation to generation called genetic equilibrium.’ (MARCH-2016)
a) Name the principle mentioned here.
b) Mention any two factors affecting the equilibrium.
c) What is the significance of disturbances occur in the genetic equilibrium?
OR
’Natural selection can lead to stabilisation, directional change and disruptive changes.’
Explain the terms stabilization, directional change and disruptive change mentioned above.
Answer:
a) Hardy-Weinberg principle
b) gene flow and genetic drift
c) they become a different species
OR
Natural selection can lead to 1 stabilisation (in which more individuals acquire mean character value)
2. directional change (more individuals acquire value other than the mean character value)
3. disruption (more individuals acquire peripheral character value at both ends of the distribution curve)

Question 18.
Observe the diagram and answer the questions below: (MAY-2016)

a) Identify the types of evolution in the concept diagrams A and B.
b) Write example pair each for homologous and analogous organs.
Answer:
A – Divergent evolution
B – Convergent evolution
Homologous organs- Cheetah and human – bones of forelimbs, thorn of Bougainvillea and tendrils of cucurbits.
Analogous organs – eye of the octopus and of mammals and flippers of Penguins and Dolphins.

Question 19.
Statement below show the features of some human fossils. Read carefully and identify the fossil. (MAY-2016)
a) Human like beings with brains capacities between 650 – 800 cc
b) Lived in East and Central Asia with brain capacity of 1400 cc.
Answer:
a) Homohabilus
b) Neaderthal man

Question 20.
A population of 208 people of MN blood group was sampled and it was found that 119 were MM group, 76 MN group and 13 NN group. Answer the following questions: (MARCH-2017)
a) Determine the gene frequencies of M and N alleles in the population.
b) How does the above frequencies affect evolution?
OR
Examine the pictures of Darwin’s Finches given below and answer the following questions:
a) What phenomenon in evolution is represented in the picture?
b) Explain the phenomenon with the help of an additional example.

Answer:
a) Adaptive radiation –In this evolution starting from a point and radiating to other areas of geography
b) A number of different marsupials evolved from an ancestral stock within the Australian island. 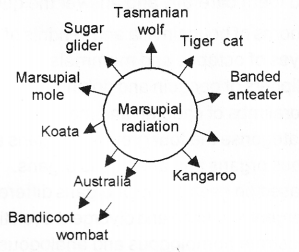 Question 22.
Diagrammatic representation of the operation of Natural Selection on different traits is given. Observe it and answer the questions: (MAY-2017) 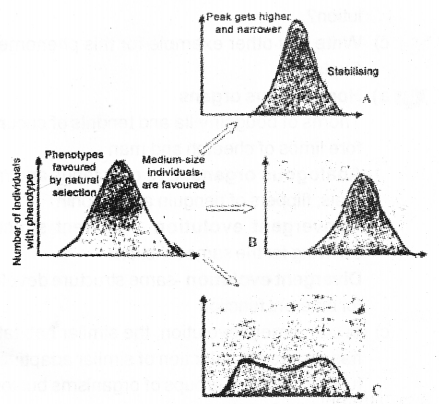