You may use following Physical constants wherever necessary.

Question 2.
A uniform wire of resistance 40Ω is cut into four equal parts and they are connected in parallel. The effective resistance of the combination is
i) 40Ω
ii) 10Ω
iii) 2.5Ω
iv) 4Ω
Answer:

Question 4.
The minimum distance between the object and its real image for a concave mirror of focal length f is
i) f
ii) 2f
iii) 4f
iv) zero
Answer:
iv) zero

Question 5.
Variation of photocurrent with collector plate potential for different intensities I1, I2, and I3 of incident radiation is shown below. Arrange these intensities in the accending order.
Answer:
I3 > I2 > I1

Question 7.
The voltage – current characteristics of an optoelectronic junction device is shown below. 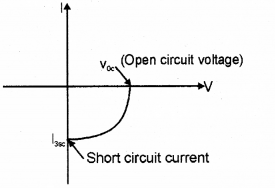 Question 9.
a) “Parallel currents attract, and antiparallel currents repel”. State whether this statement is true or false.
b) Define the SI unit of current in terms of force between two current carrying conductors.
Answer:
a) True
b) Ampere is defined as that current which is main-tained in two straight parallel conductors of infi-nite length placed one meter apart in vacuum will produce between a force of 2 × 10-7 Newton per meter length.

Question 10.
A circular metallic loop and a current carrying conductor are placed as shown in figure.

If the current through the conductor is increasing from A to B, find the direction of induced current the loop.
Answer:
Current flows in clockwise direction

Question 13.
Write the truth table of the circuit shown below.

a) Both the dipoles do not experience any torque. Why?
b) Identify the dipole which is in most stable equilibrium.
Answer:
a) Dipole moment is parallel to magnetic field.
b) Dipole Q

Question 16.
The experimental setup for the comparison of two resistances is shown below. 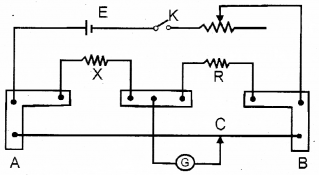 a) The working principle of the above device is
i) Ohm’s law
ii) Kirchhoffs second law
iii) Wheatstone’s principle
iv) Point Rule
b) In figure, Let X is the effective resistance of series combination of two 3Ω resistors and R is the effective of a parallel combination of two 3Ω resistors. The balance point is obtained at C. If the length AB is 100 cm. find the length AC of the wire.
Answer:
a) Wheatston’s principle
b) x = 6 Ω
R = 1.5 Ω 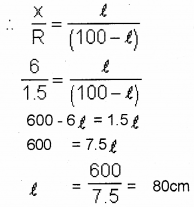 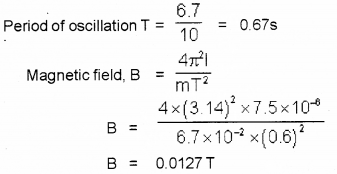 Question 18.
With the help of a ray diagram, show the formation of image of a point object by refraction of light at a spherical surface separating two media of refractive indices n1 and n2. Using the diagram derive the relation
\(\frac{n_{2}}{v}-\frac{n_{1}}{u}=\frac{n_{2}-n_{1}}{R}\)
Answer: 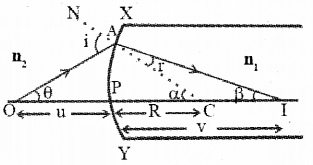 Consider a convex surface XY, which separates two media having refractive indices n1 and n2. Let C be the centre of curvature and P be the pole. Let an object is placed at ‘O’, at a distance ‘u’ from the pole. I is the real image of the object at a distance ‘V’ from the surface. OA is the incident ray at angle ‘i’ and AI is the refracted ray at an angle ‘r’. OP is the ray incident normally. So it passes without any deviation. From snell’s law,
sin i/sin r = \(\frac{\mathrm{n}_{2}}{\mathrm{n}_{1}}\)
If ‘i’ and ‘r’ are small, then sin i » i and sin r » r. 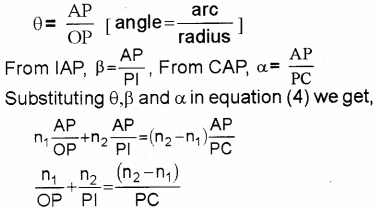 According to New Cartesian sign convection, we can write,
OP = -u, PI = +v and PC = R
Substituting these values, we get 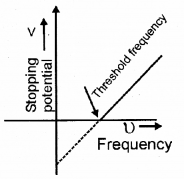 Question 20.
a) The energy levels of an atom are as shown in the figure.

Which transition corresponds to emission of radiation of maximum wavelength?
b) Sketch the energy level diagram for hydrogen atom and mark the transitions corresponding to Balmer series.
Answer:
a) In between 0 to -2ev
b)

Question 22.
a) Draw the circuit diagram where a zener diode is used as a direct voltage regulator.
b) In a zener regulated power supply a zener diode with zener voltage 4V is used for regulation. The load current is to be 4 m A and zener current is 20 mA. If the unregulated input is 10V, What should be the value of resistor that is to be connected in series with the diode?
Answer:
a)

Question 23.
Coulomb’s Law is a quantitative statement about the force between two point charges.
a) Write the mathematical expression of the above law.
b) Two ions carrying equal charges repel with a force of 1.48 × 10-8 N when they are separated by a distance of 5 × 10-10 m. How many electrons have been removed from each iron?
Answer: 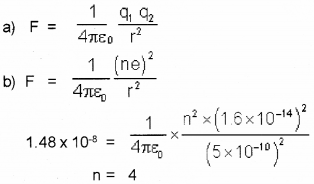 Question 24.
a) Potential energy of a system of charges is directly proportional to the product of charges and inversely to the distance between them.
a) Prove the above statement.
b) Two point charges 3 × 10-8 C and -2 × 10-8 C are separated by a distance of 15cm. At what point on the line joining the charges the potential is zero?
Answer:
a) Potential of a system is the work done to assemble the system,
∴ w = qV
= \(\mathrm{q}_{1} \times \frac{1}{4 \pi q_{0}} \frac{\mathrm{q}_{2}}{\mathrm{r}}\)
In the above equation it is dear that energy is di-rectly proportial to charges and inversely proportional to the distance between them.
b) q1 = 3 × 10-8 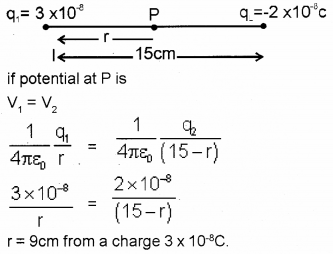 Question 25.
The circuit shown can be analysed using Kirchhoff’s rules.

Question 26.
Biot – Savart’s law relates current with the magnetic field produced by it.
a) Write the mathematical expression of the above law in vector form.
b) Using the law derive an expression for intensity of magnetic field at a point at distance x from the centre and on the axis of a circular current loop.
Answer: 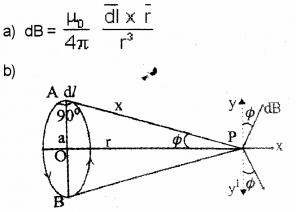 Consider a circular loop of radius ‘a’ and carrying current “I’. Let P be a point on the axis of the coil, at distance x from A and r from ‘O’. Consider a small length dl at A.
The magnetic field at ‘p’ due to this small element dI,

The dB can be resolved into dB cos Φ (along Py) and dBsinΦ (along Px).
Similarly consider a small element at B, which produces a magnetic field ‘dB’ at P. If we resolve this magnetic field we get.
dB sinΦ (along px) and dB cosΦ (along py1)
dBcosΦ components cancel each other, because they are in opposite direction. So only dB sinΦ components are found at P, so total filed at P is 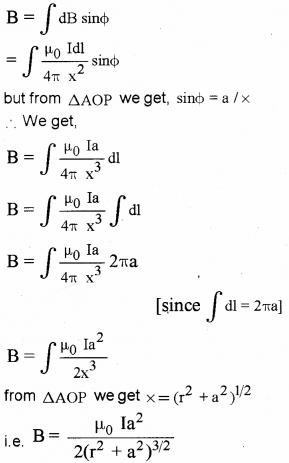 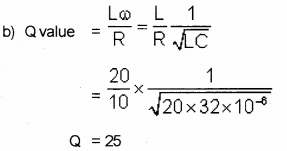 Question 29.
A wavefront is defined as a surface of constant phase.
a) The energy of the wave travels in a direction …….. to the wavefront.
b) Explain Huygen’s principle.
c) Using Huygen’s Principle, prove that angle of incidence is equal to angle of reflection.
Answer:
a) Perpendicular 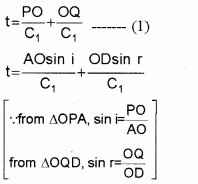