The given value of constants can be used wherever necessary.

Question 5.
a) The ratio of electric field on the equatorial point and at the axial point at equal distances from the centre of a short electric dipole is ………..
b) A closed surface encloses an electric dipole. What is the electric flux through the surface?
Answer: 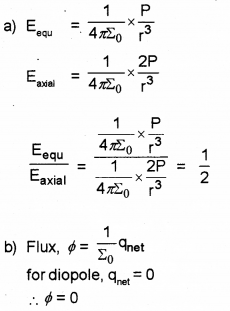 Question 6.
A series LCR circuit connected to an ac source is shown below:

Question 10.
The temperature dependence of resistivity of a material is shown below: 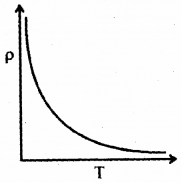 a) Identify the type of material.
b) Write the relation between resistivity and average collision time for electron.
Answer:
a) Semi conductor
b) ρ = \(\frac{\mathrm{m}}{\mathrm{ne}^{2} \tau}\)

Question 11.
What is meant by half life of a radioactive substance? Write its relation with decay constant.
Answer:
Half life is the time taken for a radio active substance to reduce half of its initial value.
\(T_{1 / 2}=\frac{0.693}{\lambda}\)

To find the electric field at P (at a distance r from the centre), we imagine a Gaussian spherical surface having radius ‘r’. 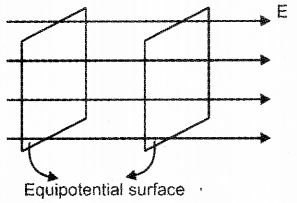 Question 14.
The elements of earth’s magnetic field at a place are declination, dip and horizontal intensity.
a) A magnetic needle free to move in horizontal plane is shown below: 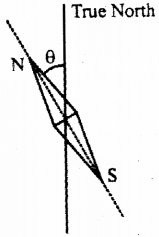 Question 15.
A transformer is used to change the alternating voltage to a high or low value.
a) What is the principle of a transformer?
b) A power transmission line feeds input power of 2300 V to a stepdown transformer with its primary windings having 4000 turns. What should be the number of turns in the secondary in order to get output power at 230 V?
Answer:
a) Mutual Induction
b) Vp = 2300 v, Np = 4000 turns
Vs = 230 v

Question 16.
Describe Young’s double slit experiment and derive an expression for the band width of the interference band.
Answer:
Expression for band width 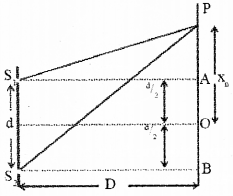 Hence the path difference, S1O – S2O = 0
So at ‘O’ maximum brightness is obtained.
Let ‘P’ be the position of nth bright band at a distance xn from O. Draw S1A and S2B as shown in figure.
From the right angle ΔS1AP 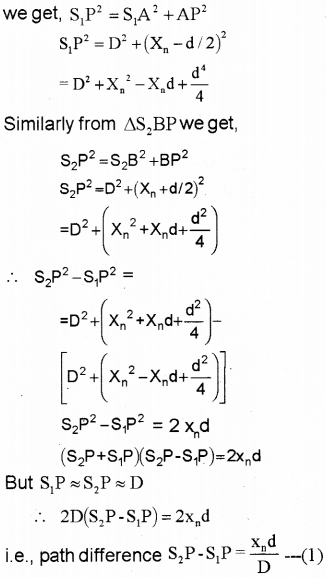 But we know constructive interference takes place at P, So we can take
(S2P – S1P) = nλ
Hence eq (1) can be written as 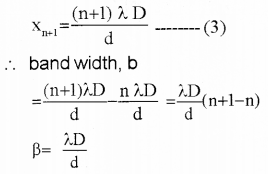 Question 17.
The schematic diagram of an experimental setup to study the wave nature of electron is shown below: a) Identify the experiment.
b) Explain how this experiment verified the wave nature of electrons.
Answer:
a) Davisson and Germer Experiment
b)

Experimental setup: The Davisson and Germer Experiment consists of filament ‘F’, which is connected to a low tension battery. The Anode Plate (A) is used to accelerate the beam of electrons. A high voltage is applied in between A and C. ’N’ is a nickel crystal. D is an electron detector. It can be rotated on a circular scale. Detector produces current according to the intensity of incident beam.

The graph shows that the detector current increases with accelerating voltage and attains maximum value at 54V and then decreases. The maximum value of current at 54 V is due to the constructive interference of scattered waves from nickel crystal (from different planes of crystal). Thus wave nature of electron is established. 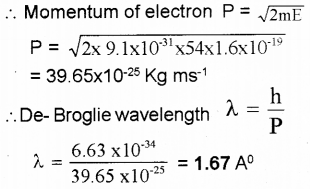 Discussion: The experimentally measured wave-length is found in agreement with de-Broglie wave length. Thus wave nature of electron is confirmed. 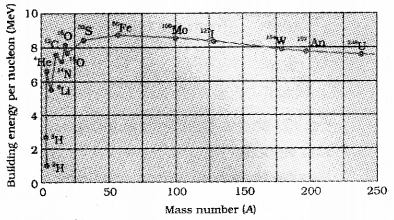 Question 19.
Niels Bohr made certain modification in Rutherford’s model by adding the ideas of quantum hypothesis.
a) State Bohr’s second postulate of quantisation of angular momentum.
b) Derive an expression for the radius and energy of the electron in the nth orbit of hydrogen atom.
Answer:
a) The orbital angular momentum of electron is an integral multiple of \(\frac{\mathrm{h}}{2 \pi}\)

b) Radius of the hydrogen atom: Consider an electron of charge ‘e’ and mass m revolving round the positively charged nucleus in circular orbit of radius ‘r’.
The force of attraction between the nucleus and the electron is

This force provides the centripetal force for the orbiting electron 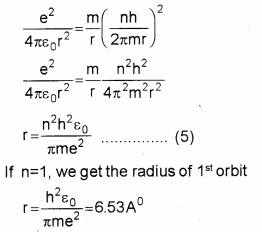 Energy of the hydrogen atom:
The K.E. of revolving electron is 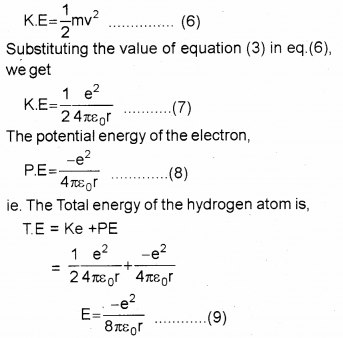 Substituting the value of equation (5) in equation (9)
we get 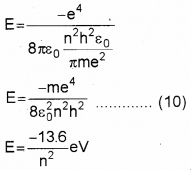 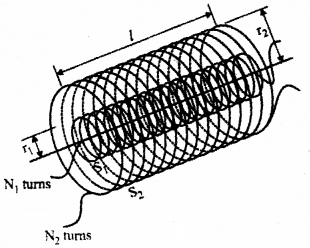 b) Consider a solenoid (air core) of cross sectional area A and number of turns per unit length n. Another coil of total number of turns N is closely wound over the first coil. Let I be the current flow through the primary.
Flux density of the first coil B = μ0nI
Flux linked with second coil, Φ = BAN
Φ = μ0nIAN ………. (1)
But we know Φ = MI ………. (1)
From eq (1) and eq (2) weget
∴ MI = μ0nIAN
M = μ0nAN
If the solenoid is covered over core of relative per-meability μr
then M = μrμ0nAN
c) ML2T-2A-2

Question 21.
A small telescope has an objective lens of focal length 140 cm and an eyepiece of focal length 5 cm. What is the magnifying power of the telescope for viewing distant objects when
a) the telescope is in normal adjustment.
b) the final image is formed at the least distance of distinct vision.
Answer: 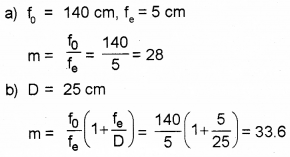 Question 22.
In Amplitude Modulation, the amplitude of the carrier wave is varied in accordance with the information signal.
a) What is meant by modulation index?
b) A message signal of frequency 10 kHz and peak value of 10 V used to modulate a carrier of frequency 1 MHz and peak voltage of 20 V. Determine the modulation index.
c) The block diagram of a transmitter is shown below. Identify the elements labelled X and Y.

Question 23.
Cyclotron is a device used to accelerate charged particles.
a) With a suitable diagram briefly explain the working of a cyclotron and obtain an expression for cyclotron frequency.
b) Acyclotron oscillator frequency is 10 MHz. What should be the operating magnetic field for accelerating protons?
Answer:
a) Principles: Cyclotron is based on two facts

Constructional Details: Cyclotron consists of two semicircular dees D1 and D2, enclosed in a chamber C. This chamber is placed in between two magnets. An alternating voltage is applied in between D1 and D2. An ion is kept in a vacuum chamber. 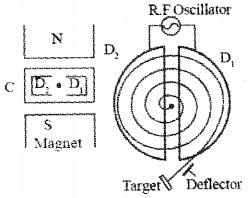 Mathematical expression: Let ‘v’ be the velocity of ion, q the charge of the ion and B the magnetic flux density.
If the ion moves along a semicircular path of radius Y, then we can write 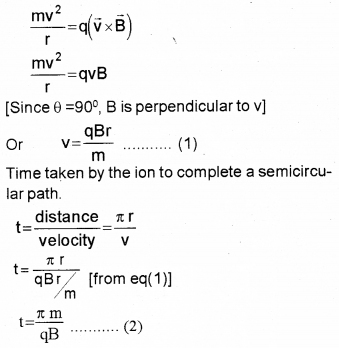 Eq. (2) shows that time is independent of radius and velocity.

Resonance frequency (cyclotron frequency): The condition for resonance is half the period of the accelerating potential of the oscillator should be ‘t’. (i.e., T/2 = t or T = 2t). Hence period of AC
T = 2t 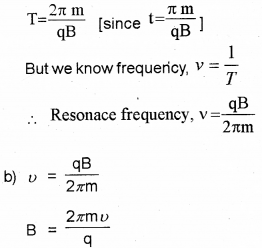 Question 24.
The experimental set up to find an unknown resistance using a metre bridge is shown below: 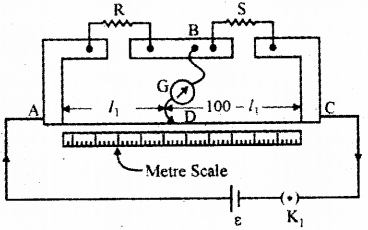 a) What is the principle of a metre bridge?
b) If the balance point is found to be at 39.5 cm from the end ‘A’, the resistor ‘S’ is of 12.5 Ω. Determine the resistance ‘R’. Why are the connections between resistors in a metre bridge made of thick copper strips?
c) If the galvanometer and cell are interchanged at the balance point of the bridge would the galvanometer show any current?
Answer: 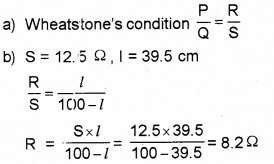 The resistors in metre bridge are made of thick copper strips to minimise the resistance of connection.
c) No. The galvanometer will not show any current.

Working: During the +ve half cycle of the a.c signal at secondary, the diode D1 is forward biased and D2 is reverse biased. So that current flows through D1 and RL.

During the negative half cycle of the a.c signal at secondary, the diode D1 is reverse biased and D2 is forward biased. So that current flows through D1 and RL. Thus during both the half cycles, the current flows through RL in the same direction. Thus we get a +ve voltage across RL for +ve and -ve input. This process is called full wave rectifcation.

Question 26.
A ray of light parallel to the principal axis of a spherical mirror falls at a point M as shown in the figure below: 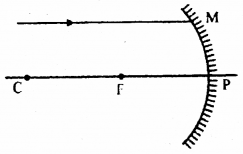 a) Identify the type of mirror used in the diagram.
b) By drawing a suitable ray diagram, obtain the mirror equation.
c) If the mirror is immersed in water, its focal length ………….
Answer:
a) Concave mirror

Let points P, F, C be pole, focus and centre of curvature of a concave mirror. Object AB is placed on the principal axis. A ray from AB incident at E and then reflected through F. Another ray of light from B incident at pole P and then reflected. These two rays meet at M. The ray of light from point B is passed through C. Draw EN perpendicular to the principal axis.
Δ IMF and Δ ENF are similar. This is called mirror formula or mirror equation,