Introduction
In this chapter, we shall study the basic concepts of electromagnetic waves.

Consider a point P, which lies outside and very close to a capacitor as shown in the figure. We can find magnetic field at P using amperes circuital law. In order to find an magnetic field at P, consider a open surface (amperien loop having pot like surface) with a boundary of circle of radius r.
Applying amperes circuital law we get
\(\oint\)B.dI = µ0i
Where ‘i’ is the current passing through the surface. (This surface lies outside to capacitor)
Integrating we get B.2πr = µ0i
B = \(\frac{\mu_{0} i}{2 \pi r}\) _____(1)

Consider a open surface (amperien loop having pot like surface) extended to interior of capacitor with a boundary of circle of radius r.
Applying amperes circuital law we get
\(\oint\)B.dI = µ00
(since the current passing through the closed surface is zero, surface lies in between the plates)
ie. B = 0 ______(2)

Discussion of method 1 and method 2: Amperian circuital law is independent of size and shape of pot like surface. Hence we expect same value of B in eq(1)and eq(2). But we got different values at the same point P. Hence we can understand that there is a mistake in the amperes circuital law in AC circuits.

The above-modified amperes circuital is known as Ampere- Maxwell law. This law is applicable for both AC and DC circuits.

Question 1.
Show that conduction current ic is equal to displacement current id
Answer:
The flux passing through the surface in between plates (see figure 2) 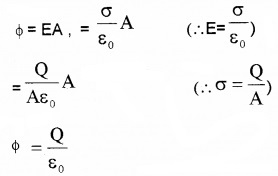 (ii) Velocity of electromagnetic waves in free space is,

E and B are in same phase

(iv) No medium is required for propagation of transverse wave.

(vi) Electromagnetic waves have capability to carry energy from one place to another.

Electromagnetic Spectrum
Electromagnetic waves include visible light waves, X-rays, gamma rays, radio waves, microwaves, ultraviolet and infrared waves. The classification is based roughly on how the waves are produced or detected.

1. Radio waves:
Radio waves are produced by the accelerated motion of charges in conducting wires. They are used in radio and television communication systems. They are generally in the frequency range from 500 kHz to about 1000 MHz.

2. Microwaves:
Microwaves (short-wavelength radio waves), with frequencies in the gigahertz (GHz) range, are produced by special vacuum tubes (called klystrons, magnetrons, and Gunn diodes). Due to their short wavelengths, they are suitable for the radar systems used in aircraft navigation. Microwave ovens are domestic application of these waves.

Infrared rays are widely used in the remote switches of household electronic systems such as TV, video recorders etc. Infrared radiation also plays an important role in maintaining the earth’s warmth or average temperature through the greenhouse effect.

UV light in large quantities has harmful effects on humans. Exposure to UV radiation induces the production of more melanin, causing tanning of the skin. UV radiation is absorbed by ordinary glass. Hence, one cannot get tanned or sunburn through glass windows.

Due to its shorter wavelengths, UV radiations can be focussed into very narrow beams for high precision applications such as eye surgery. UV lamps are used to kill germs in water purifiers. 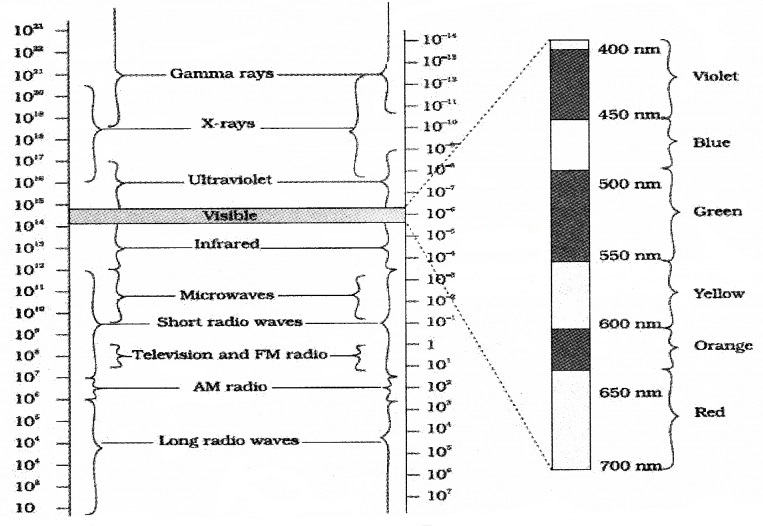 6. X-rays:
It covers wavelengths from about 10-8m to 10-13m (4nm – 10nm). One common way to generate X-rays is to bombard a metal target by high energy electrons. X-rays are used as a diagnostic tool in medicine and as a treatment for certain forms of cancer.

7. Gamma rays:
They lie in the upper-frequency range of the electromagnetic spectrum and have wavelengths of^rom about 10-10m to less than 10-14m. This high-frequency radiation is produced in nuclear reactions and also emitted by radioactive nuclei. They are used in medicine to destroy cancer cells. 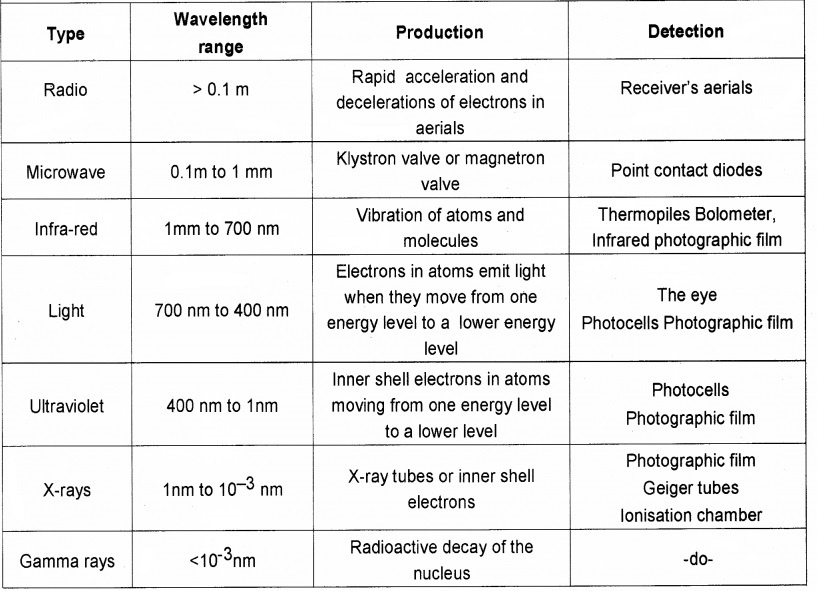