Introduction
In the present chapter, we shall study some of the basic laws concerning steady electric currents.

Electric Current
Rate of flow of electric charge is called electric current. or

Ohm’s Law
At constant temperature, the current through a conductor is directly proportional to the potential difference between its ends.
V α I (or)

where R is constant, called resistance of materials.

where ρ is the constant of proportionality and is called resistivity of material.

Resistivity is a scalar quantity and its unit is Ω-m.

The mathematical expression of Ohm’s law in terms of j and E:
Considers conductor of length i. Let V’ be the potential difference between the two ends of a conductor.
According to ohms law
We know V= IR

where σ is called conductivity of the material.

(a) Drift Velocity (vd):
The average velocity acquired by an electron under the applied electric field is called drift velocity.

Explanation: When a voltage is applied across a conductor, an electric filed is developed. Due to this electric field electrons are accelerated. But while moving they collide with atoms, lose their energy and are slowed down. This acceleration and collision are repeated through the motion. Hence electrons move with a constant average velocity. This constant average velocity is called drift velocity.

(c) Expression for drift velocity:
Let V be the potential difference across the ends of a conductor. This potential difference makes an electric field E. Under the influence of electric field E, each free electron experiences a Coulomb force.
F = -eE
or ma = -eE
a = \(\frac{-e E}{m}\) _____(1)
Due to this acceleration, the free electron acquires an additional velocity. A metal contains a large number of electrons.
For first electron, additional velocity acquired in a time τ,
v1 = u1 + aτ1
where u1 is the thermal velocity and τ is the relaxation time.
Similarly the net velocity of second, third,……electron

(d) Relation between electric current and drift speed:
Consider a conductor of cross-sectional area A. Let n be the number of electrons per unit volume. When a voltage is applied across a conductor, an electric filed is developed. Let vd be the drift velocity of electron due to this field.
Total volume passed in unit time = Avd
Total number of electrons in this volume = Avdn
Total charge flowing in unit time=Avdne
But charge flowing per unit time is called current I ie. current, I = Avdne
I = neAvd
Now current density J can be written as
J = nevd (J= I/A)
Deduction of Ohm’s law: (Vector form)
We know current density
J = nvde 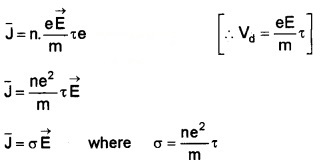 1. Mobility: Mobility is defined as the magnitude of the drift velocity per unit electric field. 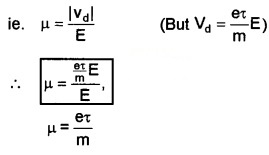 Limitations Of Ohm’s Law
Certain materials do not obey Ohm’s law. The deviations of Ohm’s law are of the following types.
1. V stops to be proportional to I.

Metal shows this type behavior. When current through metal becomes large, more heat is produced. Hence resistance of metal increases. Due to increase in resistance the V-I graph becomes nonlinear. This nonlinear variation is shown by solid line in the above graph.

2. Diode shows this type behavior. We get different values of current for same negative and positive voltages. 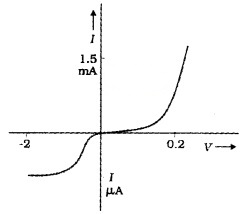 3. This type behavior is shown by materials like GaAs. there is more than one value of V for the same current I. 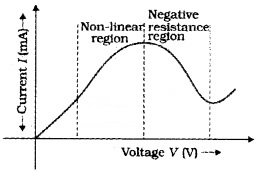 Note: The materials which do not obey ohms law are mainly used in electronics.

Resistivity Of Various Materials
The materials are classified as conductors, semiconductors, and insulators according to their resistivities. Commercially produced resistors are of two types.

1. Wire bound resistor:
Wire wound resistors are made by winding the wires of an alloy.
Eg: Manganin, Constantan, Nichrome.

(i) Colourcode of resistors:
The resistance value of commercially available resistors are usually indicated by certain standard colour coding. 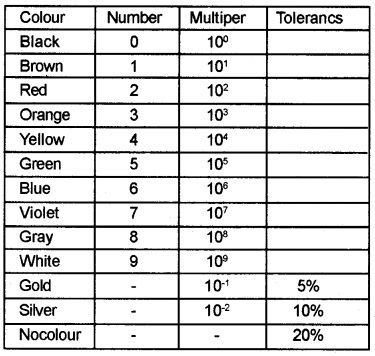 The colour code indicated in the given sample is Red, Red, Red with a silver ring at the right end. Then the value of given resistance is 22 × 102 ±10%. 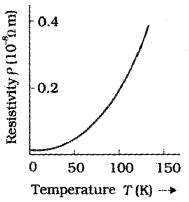 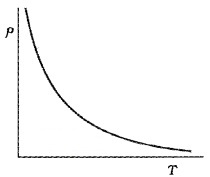 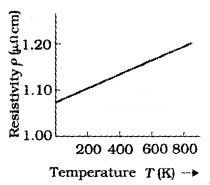 The above equation shows that resistivity depends inversely on number density and relaxation time τ.
Metals:
Number density in metal does not change with temperature. But the average speed of electrons increases. Hence the frequency of collision increases. The increase in the frequency of collision decreases the relaxation time τ. Hence the resistivity of metal increases with temperature.

Consider two points A and B in a conductor. Let VA and VB be the potentials at A and B respectively. The potential At A is greater than that B and difference in potential is V.

If ∆Q charge flows from A to B in time ∆t. The potential energy of charge will be decreased. The decrease in potential energy due to charge flow from A to B,
= VA∆Q – VB∆Q
= (VA – VB)∆Q
= V∆Q (VA – VB = V)
This decrease in PE appeared as KE of flowing charges. But we know, the kinetic energy of charge carriers do not increase due to the collisions with atoms. During collisions, the kinetic energy gained by the charge carriers is shared with the atoms.

Hence the atoms vibrate more vigorously ie. The conductor heats up. According to the conservation of energy, heat developed in between A and B in time ∆t
∆H = decrease in potential energy
∆H = V∆Q
∆H = VI∆t (∵ ∆Q=I∆t)
\(\frac{\Delta \mathrm{H}}{\Delta \mathrm{t}}\) = VI
Rate of work done is power, ie

It is this power which heats up the conductor.
Power transmission:
The electric power from the electric power station is transmitted with high voltage. When voltage increases, the current decreases. Hence heat loss decreases very much.

Combination Of Resistors – Series And Parallel Combination
Resistors in series:
Consider three resistors R1, R2 and R3 connected in series and a pd of V is applied across it.

Thus the effective resistance of series combination of a number of resistors is equal to the sum of resistances of individual resistors. 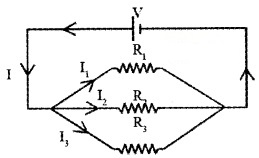 Eliminating V from all terms on both sides of the equations, we get

E.M.F:
E.M.F. is the potential difference between the positive and negative electrodes in an open circuit. ie. when no current is flowing through the cell.

Voltage:
Voltage is the potential difference between the positive and negative electrodes when current is flowing through it.

Relation between ε, V and internal drop:
Consider a circuit in which cell of emfs is connected to resistance R. Let r be the internal resistance and I be the current following the circuit.

According to ohms law,
current flowing through the circuit 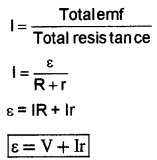 V is the voltage across the resistor called terminal voltage. Ir is potential difference across internal resistance called internal drop.

Cells In Series And Parallel 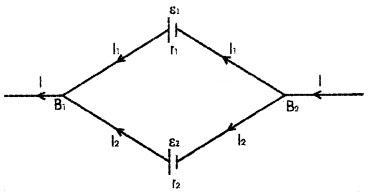 Considering the second cell, P.d between B1 and B2 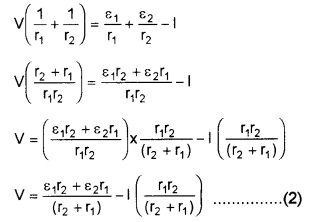 The above equation can be put in a simpler way.

Consider a junction ‘O’. Let I1 and I2 be the incoming currents and I1, I4 and I5 be the outgoing currents.
According to Kirchoff’s first law,

2. Second law (loop rule): In any closed circuit the algebraic sum of the product of the current and resistance in each branch of the circuit is equal to the net emf in that branch.

Wheatstone’s Bridge
Four resistances P, Q, R, and S are connected as shown in figure. Voltage ‘V’ is applied in between A and C. Let I1, I2, I3 and I4 be the four currents passing through P, R, Q, and S respectively. 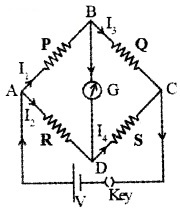 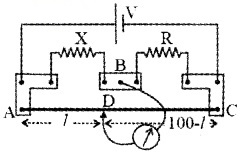 Potentiometer
(a) Comparison of e.m.f of two cells using potentiometer: 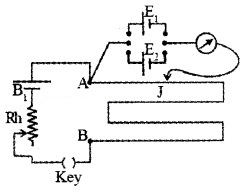 (b) Measurement of internal resistance using potentiometer:
Principle: Potential difference between two points of a current carrying conductor (having uniform thickness) is directly proportional to the length of the wire between two points.

Circuit details: Battery B1, Rheostat and key K1 are connected in between A and B. This circuit is called primary. 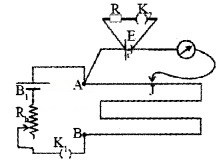 Question 1.
Why is potentiometer superior to voltmeter in measuring the e.m.f of a cell?
Answer:
Voltmeter takes some current while measuring emf. So actual emf is reduced. But potentiometer does not take current at null point and hence measures actual e.m.f. Hence potentiometer is more accurate than voltmeter.