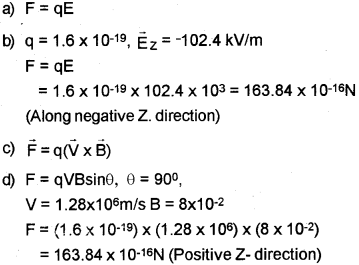 e) The two forces acting on charge (force due to electric field and another force due to magnetic field) are of the same magnitude but opposite in direction.

According to Ampere’s circuital law we can write 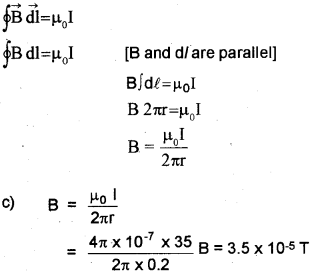 Question 1.
A cyclotron is a device that accelerates charged particles for carrying out nuclear reactions. (Say – 2010)
a) With a suitable diagram, briefly explain its working principle and how charged particles get accelerated.
b) Find the energy of emergent protons (in MeV) coming from a cyclotron having dees of radius 2 metres, when a magnetic field of 0.8 T is applied. (Mass of proton = 1.67 x 10-27 kg)
Answer:
a) CYCLOTRON
Uses
It is a device used to accelerate particles to high energy.

Principles
Cyclotron is based on two facts 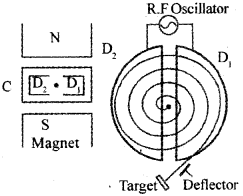 At certain instant, let D1 be positive and D2 be negative. Ion (+ve) will be accelerated towards D2 and describes a semicircular path (inside it). When the particle reaches the gap, D1, becomes negative and D2 becomes positive. So ion is accelerated towards D1 and undergoes a circular motion with larger radius. This process repeats again and again. 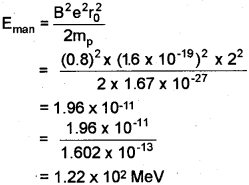 Question 1.
A moving charged particle of charge ‘q’ experiences a force both in electric field E and magnetic field B. (Say – 2011)
This force is called the ‘Lorentz force’.
a) Write down the relation for the Lorentz force.
b) A crossed electric and magnetic field is used as ………………..
c) ……………….. is a cyclic accelerator to accelerate charged particle or ions to high energies.
Answer:

Question 2
A current-carrying conductor placed in a magnetic field experiences a force. (Say – 2011)
a) Write down a relation for the force per unit length between two parallel conductors carrying current.
b) Use the above relation to define the unit of current. Given that m0 = 4p x 10-7 H/m.
c) Calculate the force per unit length on a long straight wire carrying a current of 4A due to parallel wire carrying 6A current. The distance between the wires is 3 cm.
Answer:
a) \(F=\frac{\mu_{0} I_{1} l_{2}}{2 \pi r}\)
b) An ampere is defined as that constant current which if maintained in two straight parallel conductors of infinite lengths placed one meter apart in a vacuum will produœ between a force of 2 x 1O-7N per meter length.

Question 1.
Oersted found that moving charges or currents produce a magnetic field in the surrounding space. (March – 2012)
a) An electric current is flowing due south along a power line. What is the direction of the magnetic field (i) above it and (ii) below it?
b) Draw a neat and labeled diagram of a cyclotron. State the underlying principle of its working.
c) A cyclotron’s oscillator frequency is 10 MHz. What should be the operating magnetic field for accelerating protons? C = 1.6 x 10-19 C, mass of proton np = 1.67 x 10-27 kg.
Answer:
i) West
ii) East 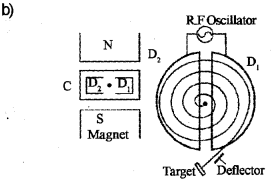 Cyclotron is based on two facts

Question 1.
The direction of velocity of two charged particles in a magnetic field is shown below. (Say – 2012) 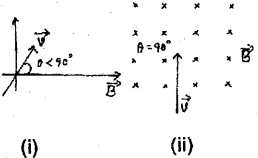 a) Sketch the path traced by the charged particle in each case.
b) “Magnetic force cannot do any work” Do you agree with this statement? Justify your answer.
c) According to Bohr atom model electrons are revolving in circular orbits around the nucleus. The movement of electrons can be regarded as a circular current flow. Then derive an expression for the magnetic dipole moment of an orbital electron.
Answer: 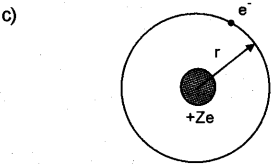 Consider an electron of charge -e. revolving around nucleus of charge +ze as shown in figure. If T Is the period of revolution 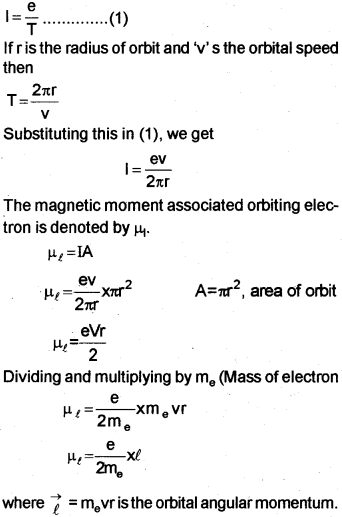 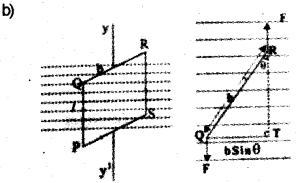 Considera rectangular coil PQRS of N turns, is suspended in a magnetic field, Let ‘I’ be the length (PQ) and ‘b’ be the bceadth (QR). When a current Iflows in the coil, each side produces a force. But the forces on PO and RS will produce a Torque.

Which can be written as 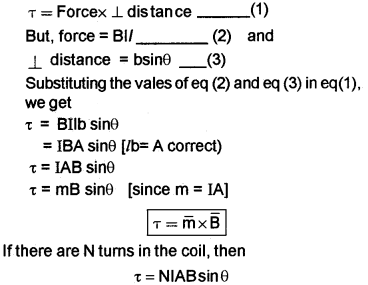 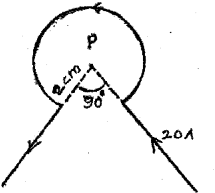 d) The wire shown in figure carries a current of 20A. Find the field at the point P.
Answer:
a) Biat Savart Law 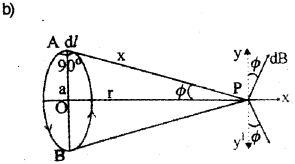 Consider a circular loop of radius ‘a’ and carrying current el’. Let P be a point on the axis of the coil, at distance x from A and r from ‘O’. Consider a small length dl at A.

The magnetic field at ‘p’ due to this small element dl,

The dB can be resolved into dB cos4) (along Py) and dB sinΦ (along Px).
Similarly consider a small element at B, which produces a magnetic field dB’ at P. If we resolve this magnetic field we get.
dB sinΦ (along px) and dB cosΦ (along py1)
dB cosΦ components cancel each other, because they are in opposite direction. So only dB sinΦ components are found at P, so total filed at P is 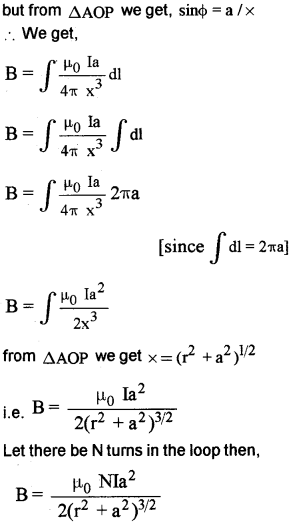 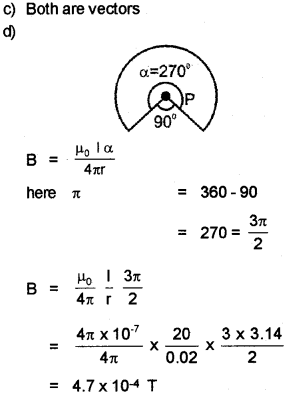 Question 2.
When a charged particle enters perpendicular to a magnetic field it experiences a force?
a) Nametheforce.
b) What is the effect of this force on the moving particle?
c) What ¡s the practical application of this effect?
d) Explain the working of a device which make use of this effect with the help of a neat diagram.
Answer:
a) Magnetic lorentz force
b) This force changes the direction of motion
c) This effect is used in cyclotron
d) Constructional Details

Cyclotron consists of two semicircular dees D1 and D2, enclosed in a chamber C. This chamber is placed in between two magnets. An alternating voltage is applied in between D1 and D2. Anion is kept in a vacuum chamber. 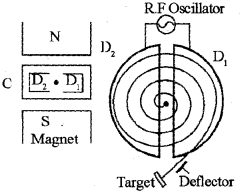 Comparing this equation with that of electric dipole, we can conclude that a current-carrying circular loop acts as a magnetic dipole. 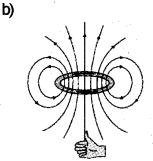 Question 1.
A) A current-carrying conductor produces a magnetic field in the surrounding space. (Say – 2016)
a) Name the law which gives the relation between current and the magnitude of the field it produces.
OR
B) Depending on the requirement, a moving coil galvanometer can be used as a current detector, an ammeter or a voltmeter.
a) Write the principle of a moving coil galvanometer.
b) Using a suitable diagram arrive at an expres-sion for the current sensitivity of a moving coil galvanometer.
Answer:
A) a) Biot-Savarts law
OR
B) a) A current-carrying conductor experiences a torque in a magnetic field and it undergoes rotation.
b) Let I be the current flowing through the coil. When coil is placed in magnetic field B, it experiences torque τ = NAIB
where N is a number of turns and A is a cross-sectional area of coil.
This torque produces a restoring torque in the spring (kΦ, Φ is deflection) Under equilibrium
Torque on the coil = restoring torque on the spring

Φ/l is the current sensitivity. It is defined as the deflection produced by unit current.

Question 1.
a) An electric charge q is moving with a velocity v in the direction of a magnetic field B. The magnetic force acting on the charge is (March – 2017)
(i) qvB
(ii) zero
(iii) q/B
(iv) v/qB
OR
a) An ammeter is a current measuring device which is always connected in …………………. in an electric circuit.
Answer:
a) ii) zero
OR
a) Series

Question 1.
a) State and explain Ampere’s Circuital Theorem. (Say – 2017)
b) Derive an expression for the magnetic field intensity produced at a point lying along the axis of a circular coil carrying current.
OR
Explain the theory and working of a moving coil galvanometer.
Answer:
a) According to ampere’s law the line integral of the magnetic field along any closed path is equal to m0 times the current passing through the surface. 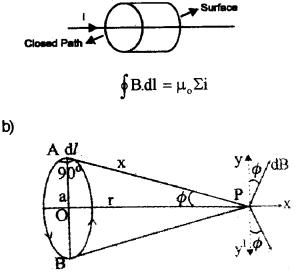 Consider a circular loop of radius ‘a’ and carrying current 9’. Let P be a point on the axis of the coil, at distance x from A and r from ‘Os. Consider a small length dl atA.

The magnetic field at ‘p’ due to this small element dl,

The dB can be resolved into dB coscΦ (along Py) and dB sinΦ (along Px).

dB sincΦ (along px) and dB coscΦ (along py1) dB coscΦ components cancel each other, because they are in opposite direction. So only dB sincΦ components are found at P, so total filed at P is 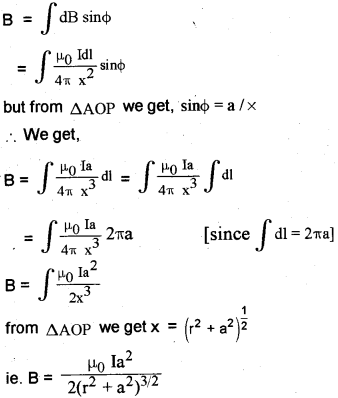 It is an instrument used to measure small current.

Principe : A conductor carrying current when placed in a magnetic field experiences a force, (given by Fleming’s left-hand rule). 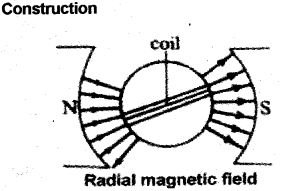 A moving coil galvanometer consists of rectangular coil of wire having area ‘A’ and number of turns ‘n’ which is wound on metallic frame and is placed between two magnets, The magnets are concave in shape, which produces radial field.

Working : Let ‘I’ be the current flowing the coil, Then the torque acting on the coil.

τ = NIAB Where A is the area of coil and B is the magnetic field.

This torque produces a rotation on coil, thus fiber is twisted and angIe (Φ). Due to this twisting a restoring torque (τ = KΦ) is produced ¡n spring.

The quantity inside the bracket is constant for a galvanometer.
Φ α l
The above equation shows that the deflation depends on the current passing through the galvanometer.