Question 1.
A potentiometer wire of length 100 cm has a resistance of 10 ohms. It is connected in series with a resistance R and a cell of emf 2V and negligible internal resistance. The circuit is as shown below. (March – 2009) 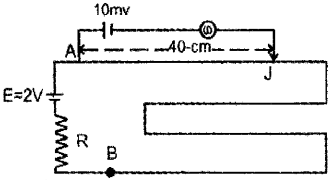 p) What is the principle of a potentiornèter?
q) Why is it prefered over a voltmeter?
r) What is the resistance of 40 cm length of the potentiometer wire?
s) If a source of emf 10 millivolts is balanced by a length of 40cm of the potentiometer wire, find the value of the external resistance
t) While performing an experiment on potentiometer what precautions (at least tow) one must observe in the laboratory?
Answer:
p) The potential difference between two points of a current-carrying conductor is directly proportional to the length of wire between two points.
q) Potentiometer measures emf without drawing current from the cell (null method)
r) Resistance per unit length = 10Ω/100cm = 0.1Ω/cm Resistance of 40cm wire = 40 x 1 = 4Ω
s) The current through wire, \(i=\frac{2}{(10+R)}\) Potential drop across 40cm wire \(=\frac{8}{(10+R)}\)
Hence 8/10 + R = 10 mv ∴ R = 790Ω
t) Primary circuit should not be changed during the measurement, or The primary emf should be greater than emf of celt to be measured.

Question 2.
Copper is one of the suitable material to make connecting wires due to its low resistivity. (March -2010)
a) What do you mean by resistivity?
b) A copper wire is in the form of a cylinder and has a resistance R. It is stretched till its thickness reduces by half of its initial size. Find its new resistance in terms of R.
Answer:
a) Resistivity is the resistance of a conductor having unit length and unit area cross-section. 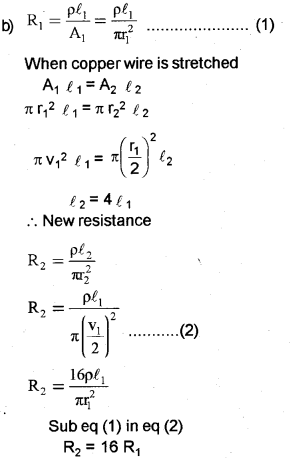 Question 3.
a) A carbon resistor of 58 kΩ is marked with rings of different colours for identifying it. What will be the sequence of colours on this carbon resistor? (Say – 2010)
b) Suppose two wires – one made of copper and another made of Germanium are given to you. If you heat these wires, what happens to their resistivity? Give reasons (Assuming there is no change in dimension of wires)
c) Five equal resistances each of value ‘R’ Ω are connected as a network shown below: 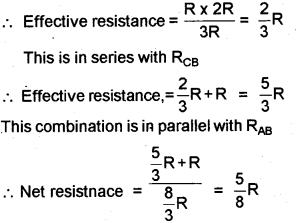 Question 4.
Remya makes the following circuit to measure the emf of a cell. (March – 2011) 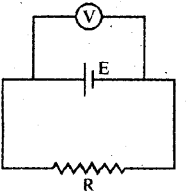 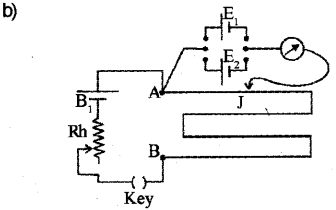 a) The average velocity gained by electrons in a conductor when an electric field is applied is called drift velocity.
b) Relaxation time is the average of the time between two successive collisions of the free electrons with atoms.
c) Consider a conductor of cross-sectional area A. Let n be the number of electrons per unit volume. When a voltage is applied across a conductor, an electric filed is developed: Let vd be the drift veloc-ity of electron dye to this electric field.
Total volume passed in unit time = Avd
Total number of electrons in this volume = Avdn
Total charge flowing in unit time = Avdne
But charge flowing per unit time is called current I ie. current, I = Avdne I = neAvd

a) Find the equivalent resistance of the above circuit.
b) Determine the current through the 75 W resistance.
Answer:
a) The circuit can be redrawn like this 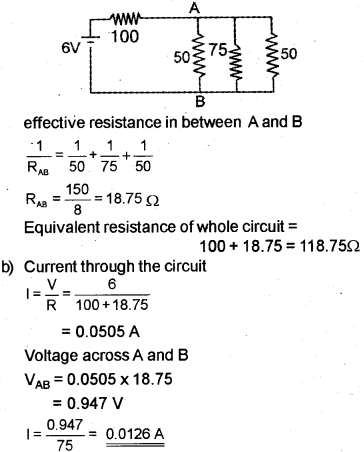 Question 6.
Colour code of the carbon resistor is shown in the figure. What is the value of this resistance with tolerance? (Say – 2011)

Question 7.
In the circuit shown below what would be the amme ter and voltmeter readings if the key K is dosed? 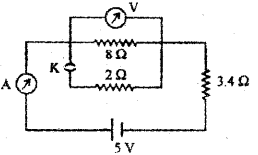 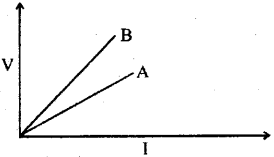 Answer:
a) \(R=\frac{\rho \ell}{A}\)
b) Slope of V – I graph gives the resistance of the material. In this graph slope of B is greater than A. ie. RB > RA. Hence the graph B represents voltage current change for L1.

Question 10.
In the potentiometer circuit shown, the balance point is at X.

State with reason, where the balance point will be shifted, when
a) Resistance R is increased, keeping all param eters unchanged.
b) Resistance S is increased, keeping R constant.
c) Cell P is replaced by another cell whose e.m.f. is lower than that of cell Q.
d) You are asked to compare the e.m.f of two cells using a potentiometer. Draw the circuit diagram for this and explain how you will determine the ratio of e.m.f.
Answer:
a) Balance point will be shifted towards B. When R increases, current through wire (AB) decreases. Hence potential gradient of wire AB decreases. Hence more length is required to bal ance the cell Q.
b) No change in balancing length. Variation ¡n resis tance s does not change potential gradient of wire AB.
c) Balance point will be shifted towards A. When we decrease the value of secondary emf, corresponding balancing length of the wire decreases because Eαl. 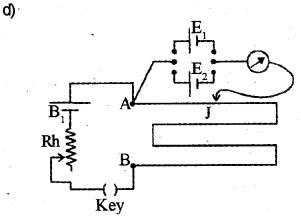 Construct a circuit as shown in the figure. Key in primary circuit is closed and then E1 is put into the circuit and balancing length I is found out. Then,E1 α l1 ………………… (1)

Question 11.
a) To construct an, electronic circuit, you want to select a 470 kW resistor with 5% tolerance. Draw a schematic diagram indicating the colour combinations that you will select. (March – 2013)
b) As the temperature of a metallic resistor is increased; the product of its resistivity and conductivity …………….
i) Increase
ii) Decreases
iii) Remains constant
iv) May increase or decrease
c) Draw a graph showing the relation between resistivity and temperature of a superconductor.
d) State Kirchhoff’s rules for the analysis of electrical circuits.
e) The circuit diagram of a potentiometer for the determination of internal resistance of a cell is shown below. Calculate the value of the internal resistance (r) of the cell. 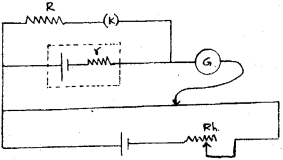 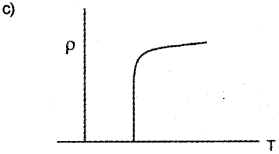 Question 12.
The resistance ‘R’ of a conductor depends on its length T, area of cross-section ‘A’ and the resistivity ‘p’ of the material. (Say – 2013)
a) Write an expression connecting R, I, A and p.
b) What happens to the resistivity of the material if the conductor is stretched to double its length?
c) The voltage-current variation of two metallic wires ‘X’ and ‘Y’ at constant temperature are as shown in fig.
Assuming that the wires have the same length and the same diameter, explain which of the wires will have larger resistivity.

d) Three resistances are connected to a battery as shown in the diagram. Find the value of current in the circuit.

Answer:
a) \(R=\frac{\rho L}{A}\)
b) Resistivity does not change with dimension of material. 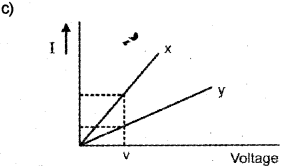 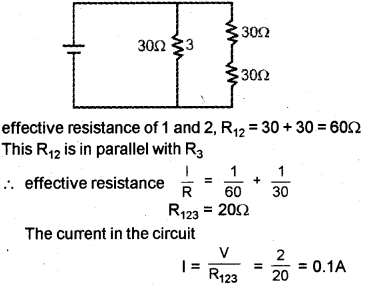 Kirchhoff’s second law
Total emf in a closed circuit is equal to sum of voltage drops.
b) Refer Section 3.14

a) From the above figures which one corresponds to a typical semiconductor. (March – 2014)
b) Dimension of temperature coefficient a is
c) Steady current flows in a metallic conductor of the nonuniform cross-section. Which of the following quantities is a constant along the conductor?
A) Current
B) Current density
C) Electric field
D) Drift speed
Answer:
a) Fig. (2)
b) K-1 or θ-1
c) Current (or A)
d) Because current is independent of area. All other quantities depend on area of cross-section. 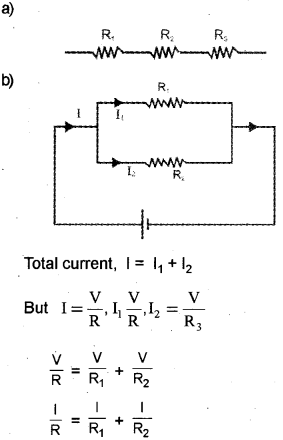 c) Calculate the effective resistance between the terminals P and Q in the above diagram
Answer: 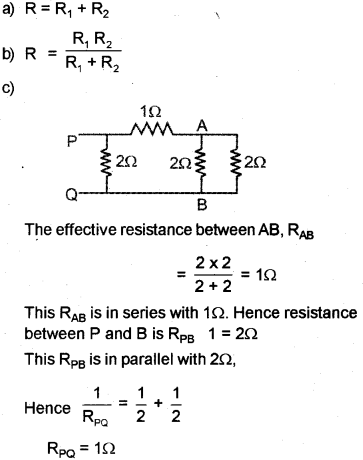 AB is a resistance wire. Which is connected to a cell as shown in the figure. If current through AB is constant, potential difference between any two points of wire AB will be proportional to length between two points.

Construct a circuit as shown in the figure. The key (K1) is the secondary (K2) is open. Jockey is moved to get zero deflection in galvanometer. The balancing lengh (l1) is found out.

Question 18.
Kirchhoff’s rules are very useful for analysis of electrical circuits.
a) State Kirchhoff’sjunction rule.
b) Find the effective resistance of the circuit given below:

Consider a junction ‘O’ Let l1 and l2 be the incoming currents and l3, l4 and l5 be the outgoing currents.
According to Kirchoff’s first law, 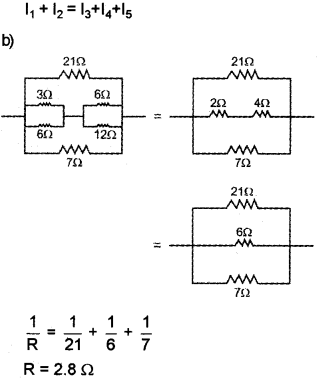 Question 19.
The following question has a choice: (March – 2016)
a) Which of the following obeys Ohm’s law?
i) Transistor
ii) Nichrome
iii) Diode
iv) Liquid electrolyte

Question 21.
a) Table given below shows the current (I) voltage (V) relationship of a device.

Draw V-l graph. With the help of the graph explain whether the device is showing ohmic or non-ohmic behaviour.
b) Name two devices which do not obey Ohm’s law.
Answer: 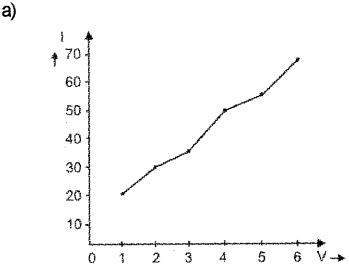 Question 22.
a) Resistivity of a conductor depends upon (March – 2017)
i) its material
ii) its cross-sectional area
iii) its length
iv) All of the above
b) Calculate the current flowing through the following circuit: 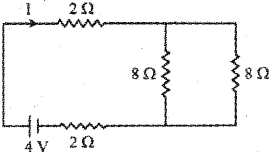 Question 23.
A resistance R is connected to a cell of EMF E and has an internal resistance r as shown in the figure. The voltage across R is measured using and ideal voltmeter and circuit current is measured by an ammeter. A rheostat of negligible resistance is used to vary the current in the circuit. (SAy – 2017) 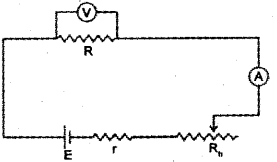 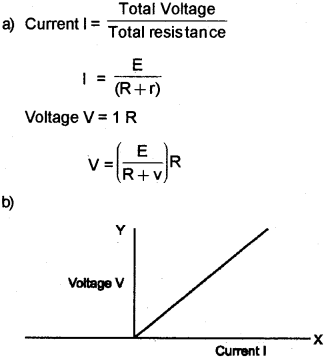