Question 6.
Identify the items to be included to trade balance to get current account balance.
Answer:

Question 7.
Identify the situation mentioned below.

Question 9.
The consumption function and import function of an economy can be given as,
C = a + b.y
M = M + m.y Identity the letters 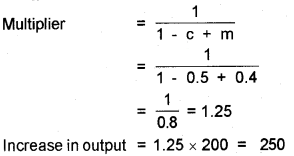 Question 12.
What happens to the aggregate demand due to

Question 13.
List out the expert of services from the following……..
(a) India buys a new technology from France
(b) A Japaneese tourist visits India
(c) An Indian student registers for a UK exam
(d) an Indian doctor going to work in the US.
Answer:
b and d are examples of expert services from India.

Question 14.
Analyse the effect of the following on imports and exchange rate. 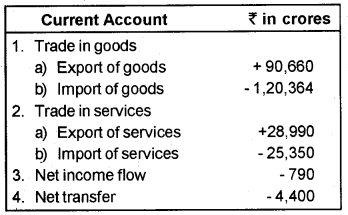 Question 9.
a. Recently the government of UK decided to relax the visa norms to Indian visitors.
b. The government of India approved a purchase of weapon for Indian defence from rest of the world for an amount of 82000 crores 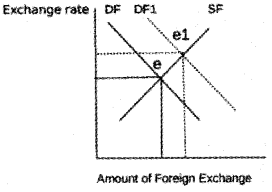 Sometimes, a distinction is made between fixed and pegged exchange rates. Under a fixed exchange rate system, such as the gold standard, adjustment to BoP surpluses or deficits cannot be brought about through changes in the exchange rate.

Under this system, also called dirty floating, central banks intervene to buy and sell foreign currencies in an attempt to moderate exchange rate movements whenever they feel that such actions are appropriate. Official reserve transactions are, therefore, not equal to zero.

The balance of payments (BoP) records the transactions in goods, services and assets between residents of a country with the rest of the world. There are two main accounts in the BoP the current account and the capital account. 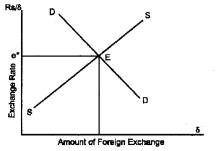 At the initial equilibrium exchange rate e*, suppose there is now an excess demand for foreign exchange. To clear the market, the exchange rate must rise to the equilibrium value e1 as shown in the following figure.

On the other hand, change in the price of foreign exchange under flexible exchange rate, when it becomes cheaper as compared to domestic currency is known as depreciation.

On the other hand, accommodating transactions are determined by the net consequences of the autonomous items, that is whether the BOP is in surplus or deficit. These items are called ‘below the line.

Question 14.
Suppose the equilibrium exchange rate is shown in the figure. What happens to this equilibrium situation when there is increase in demand for foreign exchange?

Question 15.
Distinguish between appreciation and depreciation. Identify what happens to the exchange rate of rupees in 2015 compared to 2014.

Question 16.
The diagram below shows how the rate of exchange is determined in a free market.

Show the effect of the following on the exchange rate.

2. When the inflation of the nearby countries increases the people around would prefer to buy goods from this country. So the demand for the currency would increase leading to an increase in the rate of exchange.

Question 17.
Exchange rate is determined through different methods. Diagrams related with exchange rate are given below. 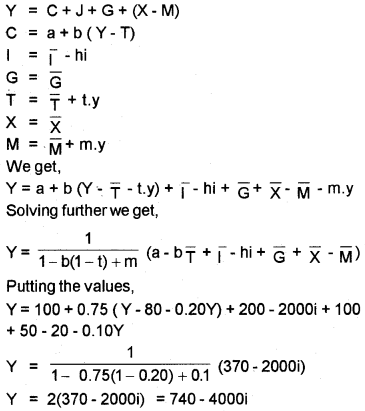