Plus Two Economics Income Determination One Mark Questions and Answers

Question 6.
The world wars adversely affected the European economy. Hence consumption and savings were low. But the ratio of consumption to income was high.
a. Can you connect the above situation with any Keynesian proposition? Name it.
Answer:
a. Consumption function with high mpc.

Question 8.
Suppose that there is an increase in autonomous investment. If so which of the following situations represent greater multiplier effect on income.

Question 1.
State whether the following statements are true or false and justify your answer.

Question 5.
Represent the parametric shift of a graph.
Answer:

Question 7.
Some values of mpc are given below. Choose the possible mpc value of a lower income group. Justify mpc value : 0.4, 0.2, 0.9, 0.6
Answer:
The lower-income group have the highest mpc (0.9). They spend a major portion of their income for consumption.

Question 2.
State whether the following statements are true or false. If false, correct the statement. 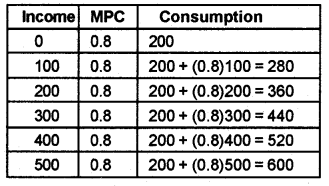 Question 10.
According to Keynesian model, as saving propensity increases, the equilibrium income decreases. Since the level of income is reduced, the volume of savings also comes down automatically. 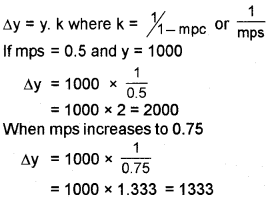 Question 11.
The following diagram shows the equilibrium income situation of a hypothetical economy with mpc 0.6 and a =70 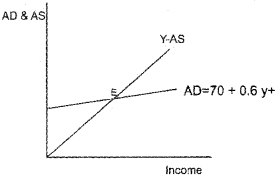 Analyse the following situations and represent the resulting change in the diagram. 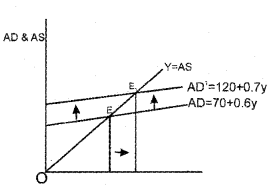 Question 2.
From the following data, calculate

Question 3.
Suppose income increases by 10 and the MPC is 0.8. Explain the multiplier mechanism with the help of a table.
Answer:
When income increases by 10, consumption expenditure goes up by (0.8)10 since people spend 0.8 (= MPC) fraction of their additional income on consumption. Hence, in the next round, aggregate demand in the economy goes up by (0.8)10 and there again emerges an excess demand equal to (0.8)10.

Therefore, in the next production cycle, producers increase their planned output further by (0.8)10 to restore equilibrium. When this extra output is distributed among factors, the income of the economy goes up by (0.8)10 and consumption demand increases further by (0.8)210, once again creating excess demand of the same amount.

This process goes on, round after round, with producers increasing their output to clear the excess demand in each round and consumers spending a part of their additional income from this extra production on consumption items-thereby creating further excess demand in the next round. 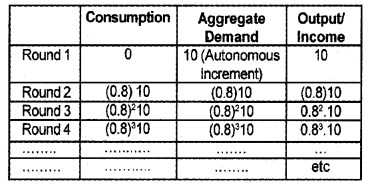 This concept can be illustrated as follows. A hypothetical consumption and saving schedule is given. 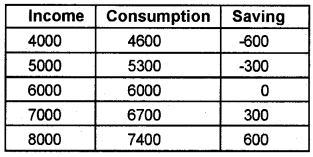 Question 5.
State the relationship between MPC and MPS.
Answer:
1. Marginal Propensity to Consume refers to the ratio of change in consumption to change in income. MPC = AC / AY.

2. Marginal Propensity to Save refers to the ratio of change in saving to change in income. MPS = ΔS / ΔY.

Question 6.
MPC of Indian economy is 0.5 and if the level of investment in the economy is increased by 100.

When the level of investment declines, the total in-come in the economy will decline.

Answer:
In the given example, 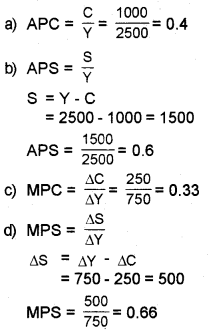 Question 8.
In an economy investment increases by ₹120 crores. The value of multiplier is 4. Calculate the MPC.
Answer:

Question 9.
In an economy investment increases by ₹120 crore. The value of multiplier is 4. Calculate the MPC.
What do you understand by “parameters of line”? How does a line shifts when its

Question 10.
What is effective demand? How will you derive the autonomous expenditure multiplier when price of goods and the rate of interest are given?
Answer:
If the elasticity of supply is infinite, then the output will be solely determined by the aggregate demand at this price in the economy. This called effective demand. The equilibrium output and aggregate demand at the given price of goods and rate of interest is derived by solving the equation.
Y = AD.
Y = A + CY
or Y – CY = A
or Y(1 – C) = A
A is the total value of autonomous expenditure. The value of Y is dependent on the value of parameters A and C. 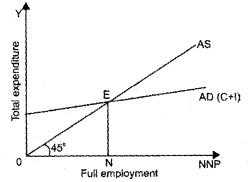 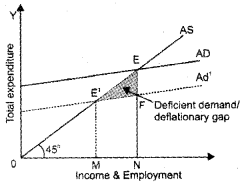 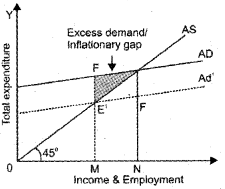 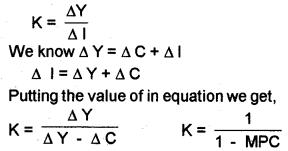 Thus it is clear from the above equation that the value of MPC and multiplier are positively related.

Question 15.
In the function AD = \(\overline{\mathrm{A}}\)+ c. y what happens to the aggregate demand curves when, 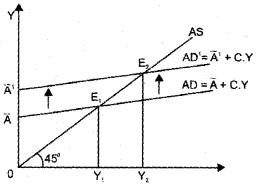 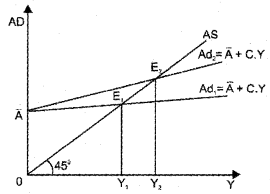 When c increases, the AD curve shifts upwards. But it is not a parallel shift, it only swings upward.

Answer:
1. Yes. Investment has a multiplier effect on income. Hence investment is necessary for economic growth.
2. impact of this investment on the equilibrium income

Question 1.
Diagram shows the equilibrium of an economy.

Answer:
1. The economy will be in equilibrium when AD = Y1 \(A D=\bar{C} + \bar{I} + c, y\) The two components of aggregate demand in a two-sector model is consumption and investment. In the diagram, OY is the equilibrium level of output.

2. When the investment increases the AD curve will shift upward. This is because invest is one of the components of AD. As a results the initial equilibrium changes from e to e1 The output increases from y to y1.