Question 1.
Represent a structure named student with types and give the advantages of using structure. [March -2016] (3)
Answer:

the structure is a group of different types of logically related data referenced by a single name.

Question 2.
Structure within a structure is termed as__ [March – 2016]
Answer:
Nested structure

Question 3.
Orphaned memory blocks are undesirable. How can they be avoided [March – 2016]
OR
Discuss problems created by memory leaks. (2)
Answer:
Proper use of delete operator is heeded
0R
1) It causes orphaned memory blocks
2) wastage of memory
3) insufficient memory
4) due to this sometimes system Say be hanged

Question 4.
Explain the use of for loop with an appropriate example. [March – 2016] (3)
Answer:
For loop is used to execute a statement more than once.
Refer 5 Mark Question 2

Question 6.
A program is implemented to find the area of a circle and area of a rectangle with two functions having same name but with different signature. [Say – 2016]
a) Name the concept (1)
b) Explain this concept by writing the above program. (2)
Answer:
a) Polymorphism 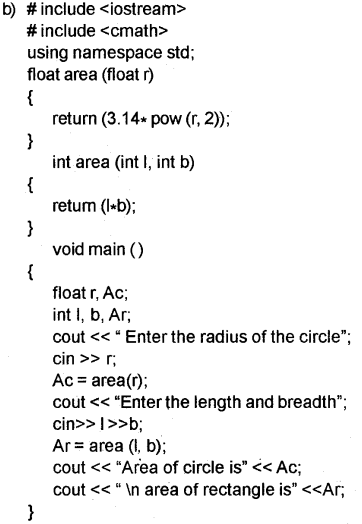 Here the function names are same but the return type and number of parameters are different hence distinguish the functions.

Question 7.
a) Write a C++ program to store and print information (name, roll and marks) of a student using structure. [Say – 2016] (3)
OR
b) Write a program in C++ to input the total marks obtained by a group of students in a class and dis-play them in descending order using pointer. (3)
Answer: 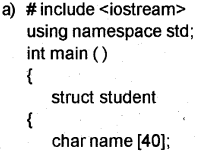 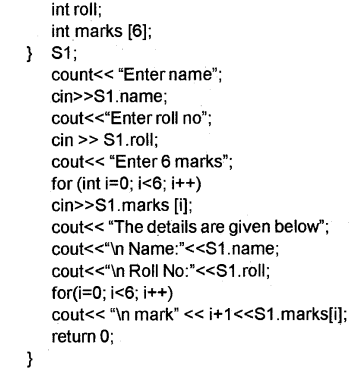 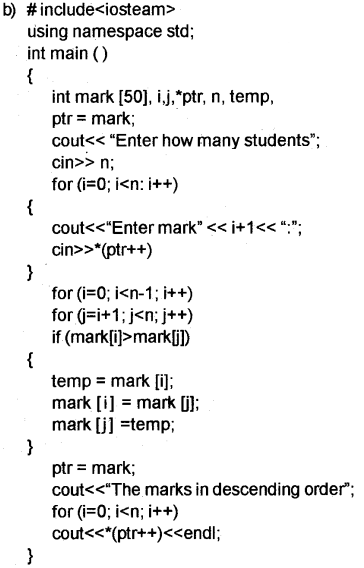 Say
Question 8.
Compare the aspects of arrays and structures. [March – 2017] (3)
Answer:
Array-: An array is a collection of elements with same data fypeOr with the same name we can store many elements, the first or second or third etc can be distinguished by using the index(subscript). The first element’s index is 0, the second elements index is 1, and so on.

To store 100 numbers the array declaration is as follows

Structure -: But a Structure is a group of different types of Ipgically related data referenced by a single name.
Eg. The collection of details of a student that may contain various data with different data types. 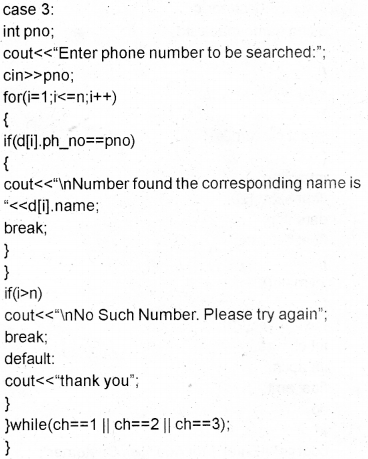 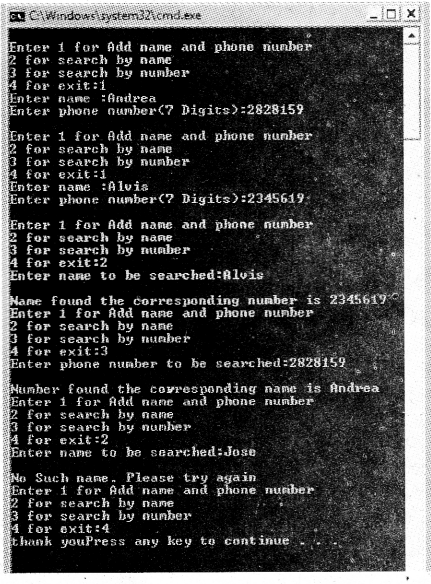 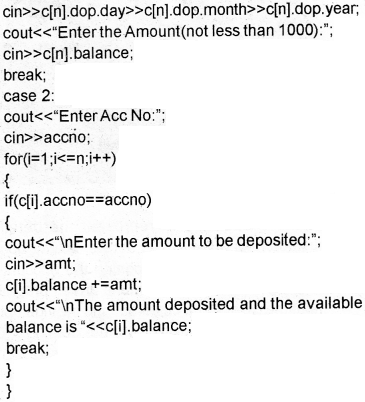 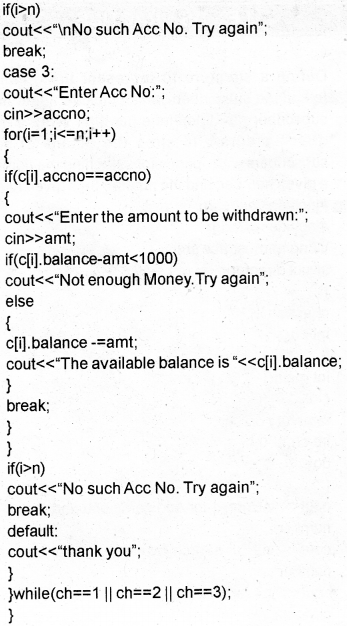 Question 3.
Write a program to input the TE scores obtained by a group of students in Computer Science and display them in the descending order using pointers.
Answer: 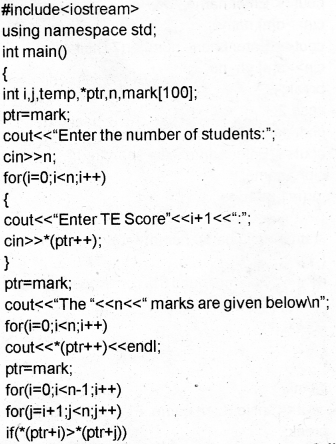 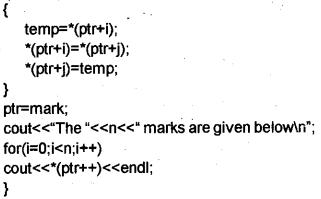 Question 4.
Write a program to input a string and check whether it is palindrome or not using character pointer.
Answer: 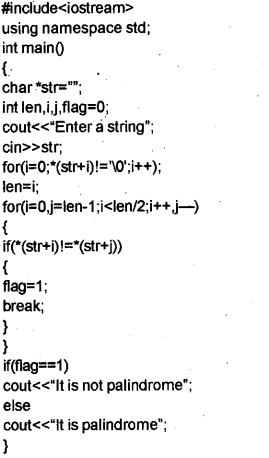 Question 5.
Write a program to input the names of students in a class using pointers and create a roll list in which the names are listed in alphabetical order with roll number starting from 1.
Answer: 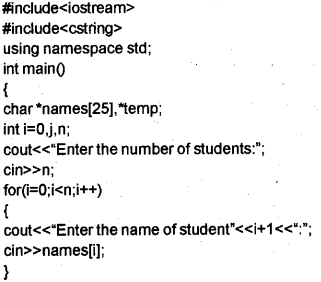 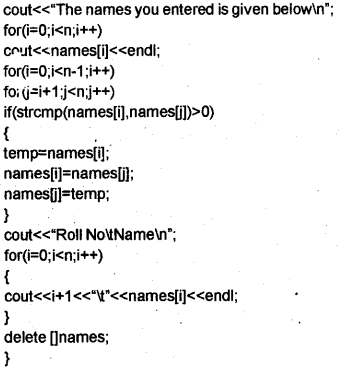 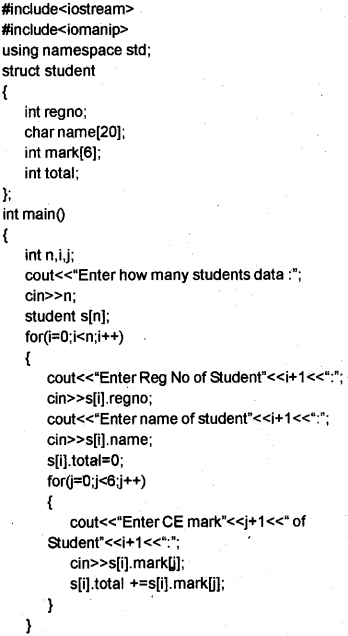 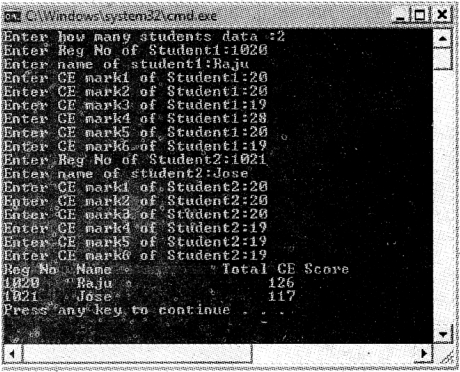 Question 2.
Identify the errors in the following structure definition and write the reason for each:

Answer:
Errors
1) No name for the structure.
The correct structure is as follows

A total of 34 Bytes allocated to the variable b. 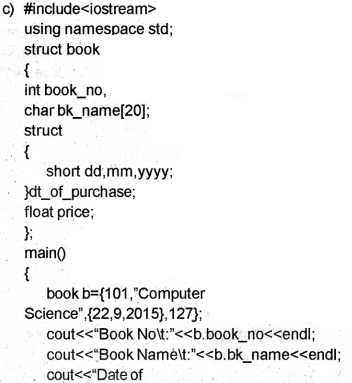 Question 4.
“Structure is a user-defined data type”. Justify this statement with the help of an example.
Answer:
Yes it is true. A user can give define according to his needs.

Question 6.
Read the following C++ statements:
int * p, a=5
p=&a;
a) What is the speciality of the variable p?
b) What will be the content of p afterthe execution of the second statement?
c) Howdo the expressions *p+1 and* (p+1) differ?
Answer:
a) p is special variable and it is called a pointer.
b) p contains the address of the variable a 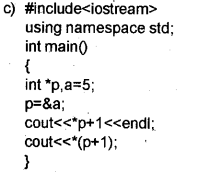 Here p+1 returns (address of the variable a) +4(4 is the size of int data type in Geany C++). *(p+1) returns the content of this next address location.

Question 7.
Identify the errors in the following C++ code segment and give the reason for each.

Answer:
Following are the errors
1) Here q is an integer pointer it can not store the address of float variable b.
2) Cannot print *a.
3) The pointers p and q are different data types so cannot use relational operator.

The correct code is as given below. 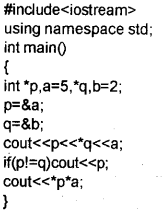 Question 8.
While writing a program, the concept of dynamic memory allocation is applied. But the program does not contain a statement with delete operator and it creates a problem. Explain the problem.
Answer:
If the memory allocated using new operator is not de allocated using delete, that memory is left unused and not released forfurtherallocation. Such memory blocks are called orphaned memory. On each execution the amount of orphaned block is increased. This situation is called memory leak.

Question 10.
Explain the working of the following code segment and predict the output:
char *str = “Tobacco Kills”;
for (int i=0; str [i] !=’\0’; i++)
if (i>8)
* (str +i) = toupper (*(str+i);
cout«str;
Answer:
The output is “Tobacco KILLS”. The toupperO function convert the characters into upper case from ninth characteronwards.

Question 12.
Explain the operations performed by the operators new and delete with the help of examples.
Answer:
new operator is used to allocate memory dynamically 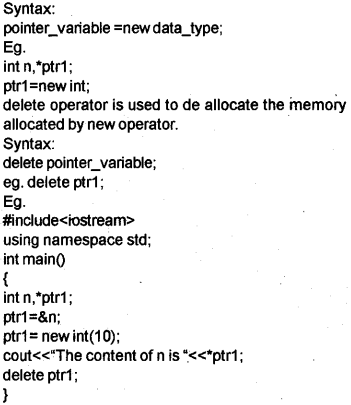 Question 13.
What is meant by memory leak? What are the reasons for it? How can we avoid such a situation?
Answer:
If the memory allocated using new operator is not de allocated using delete , that memory is left unused and not released for further allocation. Such memory blocks are called orphaned memory. On each execution the amount of orphaned block is increased. This situation is called memory leak. Use delete operator to avoid this.

Question 14.
Compare the following two statements, int a=5;
int*a=newint(5);
Answer:
int a=5; This means ‘a’ is an integer variable that is initialized with the integer value 5.
int *a=new int(5). Here ‘a’ is a pointer variable and it allocates memory dynamically and stores a value 5.

Question 15.
Read the structure definition given below and answer the following questions: