The Transition Elements (d-block):
Their position is in between more electropositive s-block and more electronegative p-block elements.

2. Variation in Atomic and Ionic Sizes:
Decreases with increasing atomic number because the new electron enters a d-orbital with low shielding power.

3. Ionisation Enthalpies:
Due to an increase in nuclear charge which accompanies the filling of the inner d-orbitals, there is an increase in ionisation enthalpy along the series.

First ionisation potential/enthalpy of the 5d series are higher than those of the 3d and 4d metals. This is due to lanthanoid contraction caused by poor shielding of the 4f electrons.

4. Oxidation State:
Transition elements shows various oxidation states which aries due to incomplete filling of d-orbital. The elements which give the greatest number of oxidation state occur in or near the middle of the series, e.g. Mn (+2 to +7)

5. Trends in the M2+/M Standard Electrode Potential:
The general trend towards less negative E° values across the series is related to the general increase in the sum of the first and second ionisation enthalpies.

6. Trends in Stability of Higher Oxidation State:
In halides, the ability of fluorine to stabilise the highest oxdn. state is due to either higher lattice energy or higher bond enthalpy. The stability of Cu2+(aq) rather than Cu+(aq) is due to the much more negative ΔhydH° of Cu2+(aq) than Cu+(aq).

7. Chemical Reactivity:
Many of them are sufficiently electropositive to dissolve in mineral acids, a few are unaffected by simple acids. The metals of the first series are relatively more reactive and are oxidised by 1M H+ (except Cu).

8. Magnetic Properties:
(a) Diamagnetism:
Due to paired electrons, they are weakly repelled by applied magnetic field.

(b) Paramagnetism:
Due to presence of unpaired electrons paramagnetic substances are weakely attracted by applied magnetic field.

9. Formation of Coloured Ions:
Most of the transition metal ions are coloured due to d-d transition of electrons. When an electron from a lower energy d orbital is excited to a higher energy d orbital, the energy of excitation corresponds to the frequency of light absorbed. The colour observed corresponds to the complementary colour of the light absorbed,

10. Formation of Complex Compounds:
They can form a large number of complex compounds due to the comparatively smaller sizes of the metal ions, their high ionic changes and the availability of d- orbital for bond formation.

(a) Catalytic Properties:
It is due to their ability to adopt multiple oxidation states and to form complexes, eg: V2O5 (Contact process), Fe (Haber’s process), Ni/Pt/Pd (Hydrogenation of hydrocarbon), TiCl4 & Al(C2H5)3 (Zeigler – Natta catalyst – polymerisation of ethene and propene).

11. Formation of Interstitial Compounds:
They are formed when small atoms like H, C or N are trapped inside the crystal lattices of metals. They hey are non-stoichiometric and are neither ionic nor covalent.

Some Important Compounds of Transition Elements:
(a) Potassium Dichromate (K2Cr2O7):
Obtained by the fusion of chromite ore (K2Cr2O4 with Na/K2CO3 in pressure of air.

The yellow solution of sodium chromate is filtered and acidified with H2SO4 to give orange sodium di chromate.

(b) Pottassium Permanganate (KMnO4):
Preparation:
By the fusion of pyrolusite ore (MnO2) with KOH and oxidising agent like KNO3to give dark green K2MnO4 which disproportionates in a neutral or acidic solution to give KMnO4. 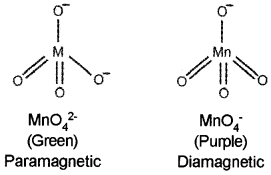 Uses:
In analytical chemistry; in organic chemistry as oxidising agent; for bleaching wool, cotton, silk and other textile fibres; fordecolourisation of oils.

2. Atomic and Ionic Sizes:
There is a regular (steady) decrease in the size of atoms/ions with increase in atomic number as we move across from La to Lu. This slow decrease in size is known as lanthanoid contraction.

(a) Cause of Lanthanoid Contraction:
The 4f electrones constitute inner shells and are ineffective in screening the nuclear charge. Consequently, the attraction of the nucleus for the electrones in the outer most shell increases with increase in atomic number and the electron cloud shrinks. As a result, the size of the lanthanoids decreases.

Actinoids:
14 elements from Th to Lr, radio active, most of the elements are man made.

1. Electronic configuration-similar to Lanthanoids, but the last electron is filled in 5f – orbital.

2. Ionic Sizes:
The gradual decrease in the size of the atoms or ions across the series (actinoid contraction). It is greater because of poor shielding by 5f electrons.

4. General Characteristics and Comparison with Lanthanoids:
Highly reactive metals. HCl acid attacks all metals, alkalies have no action, magnetic properties are more complex than those of lanthanoids.