Ores:
minerals from which the metals are economically and profitably extracted. All ores are minerals but all minerals are not ores. 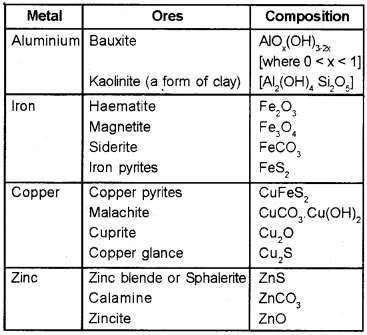 Concentration (dressing or benefaction) of Ores:
process of removal of gangue or matrix from the ore. The different process used are:

Hydraulic Washing or Gravity Seperation:
It is based on the differences in gravities. An upward stream of running water is used to wash the powdered ore. The lighter gangue particles are washed away and the heavier ores are left behind.

Magnetic Separation:
It is based on differences in magnetic properties of the ore components. It is carried out if either the ore or the gangue is capable of being attracted by the magnetic field. The powdered ore is carried on a conveyer belt which passes over a magnetic roller.

Froth Floatation Method:
used to separate sulphide ore from the gangue. Here a suspension of the powdered sulphide ore is agitated with collectors and froth stabilisers by passing a forceful current of air. The froth formed which carries the mineral particles is skimmed off and then dried.

‘Depressants’ are used to separate two sulphide ores. e.g. in case of an ore containing ZnS and PbS, the depressant used is NaCN. It selectively prevents ZnS from coming to the froth but allows PbS to come with the froth.

Leaching:
a method of ore concentration by dissolving the ore in a suitable solvent.

The aluminate solution is neutralised with CO2 gas and hydrated Al2O3 precipitated. At this stage, the slution is seeded with freshly prepared samples of hydrated Al2O3 which induces the precipitation. The sodium silicate remains in the solution.
2Na[Al(OH)4](aq) + CO2(g) → Al2O3 + xH2O(s) + 2 NaHCO3(aq)

The hydrated alumina is filtered, dried and heated to give back pureAl2O3.

Extraction of Crude Metal from Concentrated Ore:
The concentrated ore must be converted to oxide and then reduced to metal. It involves two steps.
a) Conversion to Oxide
i) Calcination:
process in which the ore is heated strongly in the absence of air.

b) Reduction of Oxide to the Metal:
The metal oxide is reduced by reducing agents (e.g. C, CO or even another metal) which combine with the oxygen of, the metal oxide.
MxOy + yC → xM + yCO

Ellingham Diagram:
graph of variation of ∆rGΘ vs. T for the formation of metal oxide from metals. 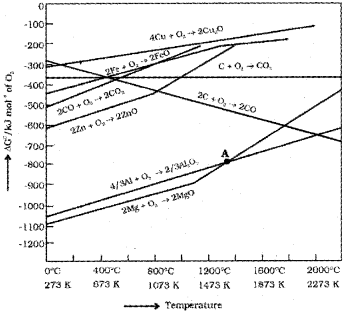 When the value of ∆G is negative in the equation ∆G = ∆H —T∆S then the reaction will proceed. If ∆S is positive, on increasing the temperature(T), the value of T∆S would increase (∆H < T∆S) and then AG will become -ve.

If the reactants and products of the coupled reaction (reduction of the metal oxide and oxidation of the reducing agent) are put together in a system and the net ∆G of the two possible reacfions is -ve, the overall reaction will occur.

a) Extraction of Iron from its Oxides:
The concentrated ore is mixed with lime stone and coke and fed into a Blast furnace from its top. Here the oxide is reduced to metal.
FeO(s) + C(s) → Fe(s/ \(\ell \)) + CO(g)

Two simpler reactions such as reduction of FeO and oxidation of coke(C) are are coupled in this process so that the Gibbs energy change of the net reaction is negative.

Pig iron – iron obtained from the blast furnace which containes about 4% carbon and many impurities.
Cast iron – It contains 3% carbon.
Wrought iron or malleable iron – purest form of commercial iron.

Preparation of Wrought Iron:
It is prepared from; cast iron by oxidising impurities in a reverberatory furnace lined with haematite, which oxidises C to CO.
Fe2O3 + 3C → 2Fe + 3CO

Limestone is added as a flux and S, Si and P are oxidised and passed into the slag. The metal is • recovered and freed from the slag by passing through
rollers.

The oxide can then be easily reduced to metallic copper using coke. This is because the Cu,Cu2O line is almost at the top in the Ellingham diagram.
Cu2O + C → 2Cu + CO

The ore is heated in a reverberatory furnace after mixing with silica. The iron oxide ‘slags of as iron silicate and copper forms copper matte. This contains Cu2S and FeS. Matte is heated in silica lined converter. The remaining Fe is converted to FeSiO3. The remaining Cu2S and Cu2O undergoes self oxidation-reduction to form blister copper.
2Cu2O + Cu2S → 6 Cu + SO2

The solidified copper obtained has blistered appearance due to the evolution of SO2 and so it is called blister copper.

c. Extraction of Zinc from Zinc Oxide:
ZnO is reduced to metallic Zn by heating with coke.

The metal is distilled of and collected by rapid chilling.

Electrochemical Principles of Metallurgy:
The metal ions in solution or molten state are reduced by electrolysis or adding some reducing element. For the reduction to be feasible E® should be positive so that ∆GΘ is negative (∆GΘ = – nFEΘ)- During electrolysis, the less reactive metal will come out of the solution and the more reactive metal will go to the solution, e.g.
Cu2+(aq) + Fe(s) → Cu(s) + Fe2+(aq)

More reactive metals have large negative EΘ values. So their reduction is difficult. Sometimes a flux is added for making the molten mass more conducting.

Extraction of Aluminium (Hall-Heroult Process):
Purified Al2O3 is mixed with Na3AlF6 or CaF2 to lower the melting point of the mix and bring conductivity. The fused matrix is electrolysed. Steel cathode and graphite anode are used. 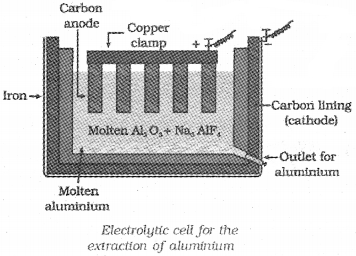 a) Distillation:
The impure metal is evaporated to get pure metal, e.g. low boiling metals like Zn, Hg

b) Liquation:
low melting metals like tin and lead are made to flow on sloping surface and thus seperated from high melting impurities.

During electrolysis Cu in the pure form istransfered from the anode to the cathode. Impurities deposit as anode mud which contains valuable elements like Sb, Se, Te, Ag, Au and Pt. Recovery of these elements meets the cost of refining.

d) Zone Refining:
This method is based on the principle that the impurities are more soluble in the melt than in the solid state of the metal. A circular mobile heater is fixed atone end of a rod of the impure metal. The molten zone moves along with the heater. As the heater moves forward, the pure metal crystallises out of the melt. The process is repeated several times. At one end impurities get concentrated. This end is cut off. e.g., Ge, Si, B, Ga and In.

e) Vapour Phase Refining:
the metal is converted into its volatile compound. It is then decomposed to give pure metal.

i) Mond Process for Refining Nickel:
Nickel is heated in a stream of CO forming a volatile complex, nickel tetracarbonyl.

The nickel tetracarbonyl is heated at high temperature so that it is decomposed to give pure Ni.

The metal iodide is decomposed on a tungsten filament at 1800 K. The pure metal is deposited on the filament.
Zrl4 → Zr + 2l2

Uses of Aluminium, Copper, Zinc and Iron
1. Aluminium:
aluminium foils are used as wrappers for chocolates, fine dust of Al is used in paints and lacqures, in the extraction of Cr and Mn from thier oxides, as electricity conductors, for making alloys, e.g. Duralumin (Al + Mg), Alnico (Al + Ni + Co).