The word polymer is coined from two Greek words poly means many and mer means unit. They are also called macromolecules.

Monomers – the repeating units of a polymer derived from some simple and reactive molecules. Polymerisation – process of formation of polymers from respective monomers.

Classification of Polymers
1. Based on Source:

2. Based on the Structure of Polymers:

4. Based on Molecular Forces:
(1) Elastomers:
Rubber-like solids with elastic properties, polymer chains are held together by the weakest intermolecular forces which stretching. The ‘cross links’ introduced help to retract the polymer to its original position after the force is released.
e.g. buna – S, buna – N, neoprene, etc.

Types of Polymerisation Reactions
a. Addition Polymerisation or Chain Growth Polymerisation:
Same or different monomers (unsaturated compounds) add together on a large scale through the formation of either free radicals or ionic species.
1. Free radical mechanism-It is characterised by 3 steps.

2. Preparation of Some Important Addition Polymers
(a) Polythene:
There are two types of polythene.
(i) Low-Density Polythene (LDP):
Obtained by the polymerization of ethene under high pressure of 1000 to 2000 atm and temperature 350 to 570 K, has a highly branched structure.
Uses: In the insulation of electrical wires; manufacture of squeeze bottles, toys and flexible pipes.

(ii) High-Density Polythene (HDP):
Formed when ethene is polymerized in a hydrocarbon solvent in presence of Ziegler-Natta catalyst (Triethylaluminium and TiCl4 at 333 K – 343 K and 6 – 7 atm. It has high density due to close packing, chemicaly inert, more tougher and harder. Uses: for making buckets, dust bins, bottles, pipes, etc.

(b) Polytetrafuoroethene (Teflon):
Formed by the polymerisation of tetrafluoroethene in presence of free radical or persulphate catalyst at high pressure.
Uses: for the preparation of oil seals, gaskets, nonstick surface coated utensils.

(c) Polyacrylonitrile (PAN):
Formed by the addition polymerisation of acrylonitrile in presence of peroxide catalyst.

Uses: as a substitue for wool in making commercial fibres as orlon or acrilan.

(ii) Nylon 6:
Obtained by heating caprolactam with water at a high temperature.

(2) Polysters:
Polycondensation products of dicarboxylic acids and diols.
(i) Dacron or Teriyne:
Manufactured by heating a mixture of ethylene glycol and terephthalic acid at 420 to 460 K in the presence of zinc acetate-antimony trioxide catalyst.

Uses: in blending with cotton and wool fibres, as glass reinforcing materials in safety helmets.

(3) Phenol-Formaldehyde Polymer:
Phenol and formaldehyde undergo condensation reaction in the presence of either an acid or a base catalyst. The initial linear product formed is called Novolac. It is used in paints.

(4) Melamine – Formaldehyde Polymer:
Formed by the condensation polymerisation of melamine and formaldehyde. Use: for making unbreakable crockery. 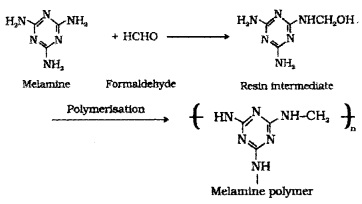 c. Copolymerisation:
Polymerisation reaction in which a mixture of more than one monomeric species is allowed to polymerise and form copolymer, e.g. Buna – S. It is quite tough and is a good substitute for natural rubber. Uses: for the manufacture of automobile tyres, floortiles, foorwear components, cable insulation, etc.

(1) Vulcanisation of Rubber:
Process of heating natural rubber with sulphur at about 373 K to 415 K To improve its physical properties. On vulcanisation, sulphur forms cross links at the reactive sites of double bonds and thus the rubber gets stiffened.

It has supreior resistance to vegetable oils and mineral oils. Uses: for manufacturing conveyor belts, gaskets and hoses.

(ii) Buna – N:
Prepared by the copolymerisation of 1,3 – butadiene and acrylonitrile in the presence of a peroxide catalyst.