Structure:
Amines have pyramidal shape and the N atom is sp3 hybridised. The three sp3 hybrid orbitals are bonded with carbon atom and the fourth orbital contains an unshared pair of electrones.

Classification
Amines are classified as 1°, 2°, and 3° depending upon the number of alkyl/aryl groups in NH3. 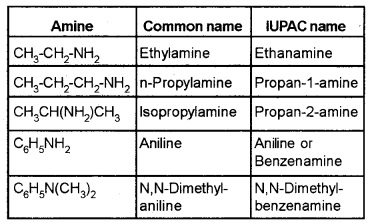 Preparation of Amines
(1) Reduction of nitro compounds:
They are reduced to amines by using H2/Pd, Sn + HCI, Fe + HCI.

(3) Reduction of Nitriles:
On reduction with LiAlH4 or catalytic hydrogenation they produce 1° amines.

(4) Reduction of amides:
On reduction with LiAlH4 they yield amines.
<

(5) Hoffmann Bromamide Degradation Reaction:
When an amide is treated with Br2 in presence of aqueous or ethanolic solution of NaOH a 1° amine with one carbon less than that present in the amide is formed. This reaction is used to step down the series.

Aromatic 1° amines cannot be prepared by this method because aryl halides do not undergo nucleophilic substitution with the anion formed by phthalimide.

Physical Properties
Lower aliphatic amines are soluble in water because they can form hydrogen bonds with water molecules. The solubility decreases with increase the molar mass of amines due to increase in size of the hydrophobic alkyl part.

Amines are soluble in organic solvents like alcohol, ether and benzene. The boiling points of isomeric amines increases in the order 1° > 2° > 3° because association through intermolecular hydrogen bonding is more in 1°amines.

Due to the unshared electrons on N atom, amines behave as Lewis bases. Basicity is expressed in Kb values or pKb values. Largerthe value of Kb, or smaller the value of pKb, stronger is the base.

Structure – Basicity Relationship of Amines:
The more stable the cation formed by protonation of the amine, more stable is the amine.

(a) Alkyl Amines versus Ammonia:
In gas phase:
Due to the electron releasing nature of alkyl group (+l effect) it pushes electron towards N and thus makes the unshared electron pair more available for sharing. Also the substituted ammonium ion formed gets stabilised due to dispersal of the positive charge.

In aqueous phase:
The greater the size of the substituted ammonium cation, lesser will be the solvation and the less stabilised is the ion. The extent of H-bonding and stability of the protonated ions follows the order: 1° > 2° > 3°. When the alkyl group is small there is no steric hindrance to H- bonding.

(b) Aryl amines versus Ammonia: Aniline and other aryl amines are weaker bases than NH3 because, the – NH2 group is attached directly to the benzene ring. It results in the unshared electron pair on N atom to be in conjugation with the benzene ring and thus making it less available for protonation.

But anilinium ion obtained by accepting a proton has only two reasonating structures.

Thus aniline is more stable than anilinium ion. In the case of substituted aniline, the electron releasing groups like – OCH3, -CH3 increase basic strength where as electron-withdrawing groups – NO2, -SO3H, -COOH, -X decrease the basicity.

(2) Acylation:
Aliphatic and aromatic 10 and 2° amines react with acid chlorides, anhydrides and esters to form corresponding amides. 3° amines do not undergo acylation.

This reaction is used as a test for 1° amines.

(a) Reaction with 1° amine -N-alkylbenzene-sulphonyl chloride is formed which is soluble in alkali due to the presence of acidic hydrogen.

(b) Reaction with 2°amine – N,N-dialkyl benzene sulphonyl chloride is formed which is insoluble in alkali due to the absence of acidic hydrogen.

(c) Tertiary amine do not react with Hinsberg’s reagent. This test is used for the distinction of 1°, 2° & 3° amines and also for the separation of a mixture of amines.

(6) Electrophilic Substitution:
The -NH2 group an activating group which directs the incoming electrophile to ortho and para postions.

(a) Bromination:
Aniline reacts with Br2 water at room temperature to give a white ppt. of 2, 4, 6- tribromoaniline.

To get para and ortho product, the activating effect of -NH2 group should be controlled by acetylation.

(b) Nitration:
Direct nitration of aniline yields tarry oxidation products in addition to the nitro derivatives. Significant amount of m- derivative is also formed. This is due to protonation of aniline to anilinium ion which is m-directing.

However, by protecting -NH2 group by acetylation, nitration gives para and ortho derivatives. Para derivative is obtained as the major product.

Aniline does not undergo Friedel – Crafts alkylation and acylation due to salt formation with the catalyst, AlCl3 Due to this, N of aniline acquires positive charge and hence acts as a strong deactivating group for further reaction.

(II) Diazonium salts:
Diazonium salts have the general formula RN2+X– where R stands for an aryl group and X– ion may be Cl–, Br–, HSO4, BF4– etc. e.g. C6H5N2+Cl– – Bezene diazonium chloride. Its stability is explained on the basis of resonance.

Chemical Reactions
A. Reactions Involving Displacement of Nitrogen:
(1) Replacement by halide or cyanide ion:
Sandmayerreaction – The Cl–, Br– and CN– ions can easily be introduced in the benzene ring by treating benzene diazonium salt with HCI, HBrorHCN in the presence of CuCl, CuBr and CuCN respectively.

Gatterman reaction – Cl or Br can be introduced in the benzene ring by treating the diazonium salt solution with corresponding halogen acid in the presence of Cu powder.

(3) Replacement by Fluoride Ion:
When arene diazonium chloride is treated with fluoroboric acid, arene diazonium fluoroborate is precipitated which on heating decomposes to yield aryl fuloride.

(4) Replacement by H:
When benzene diazonium salt is treated with mild reducing agents like hypophosphorous acid (phosphenic acid) or ethanol, the diazonium salts are reduced to arenes. ArN2+CI’ + H3P02 + H20

(5) Replacement by -OH:
When the diazonium salt solution is warmed upto 283 K, the salt gets hydrolysed to phenol.

(6) Replacement by – NO2 group:
When diazonium chloride is treated with fluoroboric acid benzene diazonium fluoroborate is formed which on heating with aqueous sodium nitrite solution in the presence of copper, the diazonium group is replaced by – NO2 group.

Importance of Diazonium Salts
In the manufacture of azo dyes, in the preparation of a number of useful organic compounds, cyanobenzene can easily be obtained from diazonium salt.