Carboxylic acids and their derivatives (esters, anhydrides) – compounds in which the carbonyl group is bonded to oxygen.

Nomenclature and Structure of Carboxyl Group
(1) Aldehydes and ketones:
(a) Common names:
Derived from the common names of the corresponding carboxylic acids by replacing ‘ic’ of the acids with ‘aldehyde’.

IUPAC names:
IUPAC names of aliphatic aldehydes or ketones are derived from the names of the corresponding alkanes. The ending ‘e’ of the alkane is replaced by ‘al’ for aldehyde and ‘one’ for ketone.
CH3 – CHO (Ethanal)
CH3 – CO – CH3 (Propanone)

Structure of the Carbonyl Group:
The carbonyl carbon atom is sp2 – hybridised. It forms 3 sigma bonds and one π bond. The carbonyl group has a trigonal coplanar structure.

bond is polarised due higher electronegativity of oxygen relative to carbon.

2. By Dehydrogenation of Alcohols:
When the vapours of 1° alcohols are passed over heated Cu catalyst at 573 K corresponding aldehydes are formed while 2° alcohols on similar treatement give corresponding ketones.

3. From Hydrocarbons:
(i) Ozonolysis of alkenes:
It involves the addition of ozone molecule to alkene to form ozonide, and then cleavage of the ozonide by Zn – H20 to aldehydes, ketones or both. 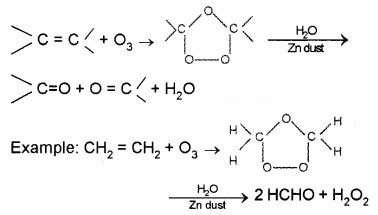 a. Preparation of Aldehydes:
(1) Rosenmund reduction – From acid chloride:
Acid chloride is hydrogenated over catalyst, Pd on BaSO4 to form aldehyde.

(2) From Nitriles and Esters (Stephen reaction):
Nitriles are reduced to immine with SnCl2/HCl which on hydrolysis gives aldehydes.

Nitriles are selectively reduced by DIBAL – H (Diisobutylaluminium hydride) to imines followed by hydrolysis to aldehydes.

Esters are reduced to aldehydes with DIBAL -H.

(3) From Hydrocarbons:
Aromatic aldehydes are prepared from aromatic hydrocarbons.
(i) By Oxidation of Methyl Benzene:
(a) Etard Reaction – Toluene or substituted toluene when treated with chromyl chloride (CrO2Cl2) the methyl group is oxidised to a chromium complex, which on hydrolysis gives corresponding benzaldehyde.

(ii) By side chain chbrination followed by hydrolysis:

(iii) Gatterman – Koch Reaction:
When benzene or its derivative is treated with CO and HCl in the presence of anhydrous AlCl3 or CUCl, it gives benzaldehyde or substituted benzaldehyde.

(2) From Nitriles:
Nitriles on treating with Grignard reagent followed by hydrolysis yield ketones.

Physical Properties
The boiling points of aldehydes and ketones are higher than those of hydrocarbons and ethers (due to dipole-dipole interaction) but lower than those of alcohols (due to absence of intermolecular hydrogen bonding).

Lower members are miscible with water (due to formation of hydrogen bond). Their solubility decreases rapidly on increasing the length of alkyl chain.

Chemical Reactions
(1) Nucleophilic Addition Reactions:
(i) Mechanism:
A nucleophile attacks the carbonyl C. Its hybridisation changes from sp2 to sp3 and a tetrahedral alkoxide intermediate is formed which captures a proton to form the product. 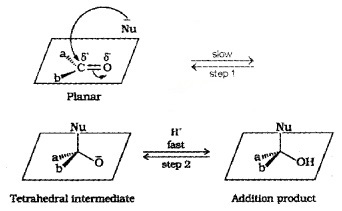 (ii) Reactivity: Aldyhydes are generally more reactive than ketones in nucleophilic addition reaction due to:
Steric reason – presence of relatively large substituents in ketones hinders the approach of nucleophile to carbonyl carbon than in aldehydes having only one such substituent.

Electronic reason – two alkyl groups reduce the electrophilicity of the carbonyl carbon more effectively in ketones than in aldehydes.

(b) Addition of Sodium Hydrogensulphite:
Corresponding crystalline addition products are formed which are water-soluble and can be converted back to the original carbonyl compound by treating with dilute mineral acid or alkali. Therefore, these are useful for separation and purification of aldehydes.

(d) Addition of Alcohols:
Aldehydes react with one equivalent of alcohol in presence of dry HCI to form hemiacetal, which further react with alcohol to form acetals.

(e) Addition of Ammonia and Its Derivatives: 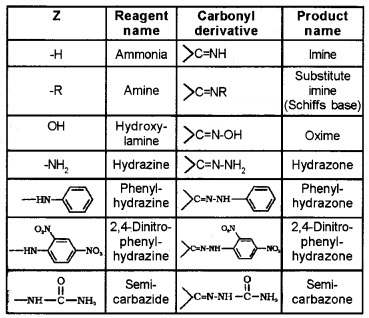 By the Reduction of Carboxylic Acids or Esters:

(ii) Reduction to Hydrocarbons:
(a) Clemmensen reduction:
The carbonyl group of aldehydes and ketones are reduced to – CH2 – group on treatment with zinc amalgam and concentrated HCl.

(b) Wolff – Kishner reduction:
The carbonyl group of aldehydes and ketones are reduced to – CH2 – group on treatment with hydrazine followed by heating with KOH in high boiling solvent such as ethylene glycol.

Ketones are oxidised under vigorous conditions to give mixture of carboxylic acids having lesser number of C atoms than the parent ketone.

(i) Tollens’ Test (Tollen’s Reagent – Ammonical AgNO3):
On warming an aldehyde with Tollens’ reagent a bright silver mirror is produced due to the formation of silver metal. Aldehydes are oxidised to corresponding carboxylate ion. Ketones do not respond to this test.
R – CHO + 2 [Ag(NH3)2]+ + 3 OH– → R – COO– + 2 Ag + 2H2O + 4NH3

(iii) Oxidation of Methyl Ketones by Haloform Reaction:
Aldehydes and ketones having at least one CH3– group linked to carbonyl C are oxidised by sodium hypohalite to corresponding carboxylic acids having one C less than that of carbonyl compound.

Iodoform reaction with NaOl is also used for detection of CH3CO- group or CH3-CH(OH)- group which produce CH3-CO- group on oxidation.

(4) Reactions Due to α-Halogen:
(i) Aldol Condensation:
Aldehydes and ketones having at least one α-hydrogen react in presence of dilute alkali to form β-hydroxy adehydes (aldol) or β-hydroxy ketones (ketol) respectively. 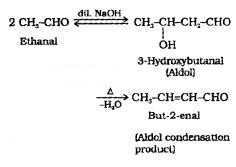 (5) Other Reactions:
(i) Cannizzaro Reaction:
Aldehydes which do not have an α-H atom, undergo self oxidation-reduction (disproportionation) reaction on treatment with cone, alkali. In this reaction one molecule of the aldehyde
is reduced to alcohol while another is oxidised to carboxylic acid salt.

Uses of Aldehydes and Ketones:
As solvent in industry; 40% HCHO solution is formalin; HCHO is used to prepare bakeite, urea-formalde glues and other polymeric products; C6H5CHO is used in perfumery and in dye industries; Butyraldehyde, vanaline, acetophenone, camphor are well known for their odours and flavours; Acetone and ethyl methyl ketones are common industrial solvents. 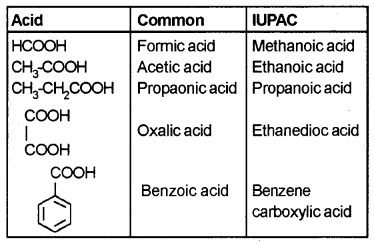 Structure of Carboxylic Group:
The bonds to the carboxyl C lie in one plane and are separated by about 120°. The carboxylic carbon is less electrophilic than carbonyl carbon because of resonance.

Methods of Preparation of Carboxylic Acids
(1) From primary alcohols and aldehydes:
10 alcohols are readily oxidised to carboxylic acids using KMnO4 in neutral, acidic or alkaline media or by K2Cr2O7 and CrO3 in acidic media.

Carboxylic acids can be prepared from aldehydes even using mild oxidising agents.

(2) From alkylbenzenes:
On vigorous oxidiation using chromic acid or acidic or alkaline KMnO4, the entire side chain of the alkyl benzene is oxidised to carboxyl group irrespective of length of the side chain.

(3) From Nitriles and Amides:
Nitriles are hydrolysed to amides and and then to carboxylic acid in the presence of H+ or OH– as catalyst. 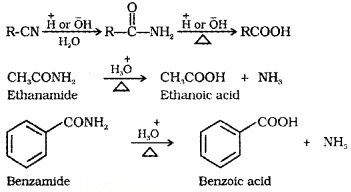 (4) From Grignard Reagent:
Grignard reagents react with CO2 (dry ice) to form salts of carboxylic acids which on acidification with mineral acids give corresponding carboxylic acids.

Anhydrides are hydrolysed to corresponding acids with water.

Physical Properties
They have high boiling points than aldehydes, ketones, and even alcohols of comparable molecular mass due to more extensive association through intermolecular hydrogen bonding.

The presence of an electron-withdrawing group on the phenyl group of aromatic carboxylic acids increases their acidity while electron-donating groups decrease their acidity.

b. Reactions Involving Cleavage of C-OH Bond:
(1) Formation of Anhydride:
Carboxylic acids on heating with mineral acids such as H2SO4 or with P2O5 give anhydride.

(2) Esterification:
Carboxylic acid are esterified with alcohols or phenols in presence of mineral acids.

(4) Reaction with Ammonia:
Ammonium salts are formed which on further heating give amides.

4. Substitution Reactions in the Hydrocarbon Part:
(1) Halogenation – Hell-Volhard-Zelinsky (HVZ) Reaction:
Carboxylic acids having an α – hydrogen are halogenated, at the α – position on treatment with Cl2 or Br2 in presence of small amount of red P to give α – halo carboxylic acids. 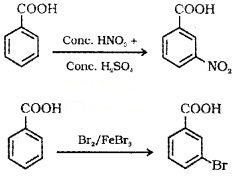