(b) Allylic Halides:
The halogen bonded carbon atom (sp3) is bonded to (C=C)

(c) Benzylic Halides:
halogen atom is bonded to an sp3 hybridised carbon atom next to an a aromatic ring.

Nature of C -X Bond
Since the halogen atom is more electronegative than C, the C – X bond of alkylhalide is polarised.

Methods of Preparation
1. From Alcohols:
The -OH group of an alcohol is replaced by halogen on reaction with halogen acids (HX), PX3, PCl5, SOCl2, etc.

2. From Hydrocarbons:
(a) Free RadicalHalogenation:
Free radical chlorination or bromination of alkanes gives mixture of isomers.

(c) Sandmayer’s Reaction:
When a primary aromatic amine, dissolved or suspended in cold aqueous mineral acid, is treated with sodium nitrite, a diazonium salt is formed.

Mixing the solution of the freshly prepared diazonium salt with cuprous chloride (Cu2Cl2) or cuprous bromide (Cu2 Br2) results in the replacement of the diazo group by -Cl or -Br. 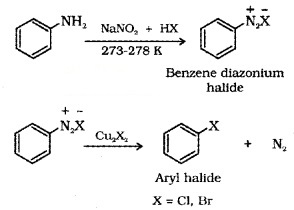 Aryl iodide is prepared by shaking the diazonium salt with potassium iodide.

(d) From Alkanes:
Addition of hydrogen halides to an alkene gives alkyl halide. The addition is according to Markovnikov’s rule.

Physical Properties
Melting and Boiling Points: Lower members are gases and higher members are liquid or solids. Intermolecular forces of attraction are stronger in the halogen derivatives. Hence bp of chlorides, bromides and iodides are higherthan that of parent hydrocarbon.

The boiling points of alkyl halides decrease in the order Rl > RBr > RCI > RF. The bp of isomeric haloalkanes decrease with increase in branching. The bp of p-isomeric dihalobenzenes are higher than that of o- and m- isomers.

Solubility:
Haloalkanes are only very slightly soluble in water. But they, are soluble in organic solvents.

Chemical Reactions
a. Reactions of Haloalkanes: divided into three:

1. Nucleophilic Substitution Reaction:
The halogen atom is substituted by other nucleophiles.

Mechanism:
(a) Substitution Nucleophilic Bimolecular (SN2):
Reaction between R – X and Nu follows second order kinetics, i.e., rate depends upon the concentration of both the reactants. Consider the reaction of CH3 – Cl & OH–

The incoming nucleophilic interacts with alkyl halide causing the C-X bond to break while forming a new C-OH bond. After the completion of reaction, the configuration of the carbon atom inverts. This process is called inversion of configuration.

The breaking and forming of bond take place simultaneously in a single step and no intermediate is formed. But a transition state is formed.

3° alkyl halides are the least reactive because bulky groups hinder the approaching of nucleophile. Order of reactivity: 1° > 2° > 3° halides.

(b) Substitution nucleophilic unimolecular (SN1):
Reaction between RX and Nu follows first order kinetics, i.e., rate depends the concentration of only one reactant. It occurs in two steps. In step I, the C – X band undergos slow.cleavage to produce a carbocation and in step II the carbocation is attacked by nucleophile, e.g. 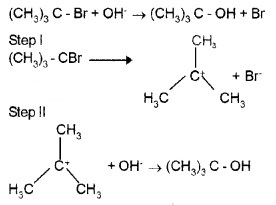 Allylic and benzylic halides show high reactivity towards SN1 reaction because the carbocation formed gets stabilised through resonance.

(ii) Molecular assymmetry:
If all the atoms/substituents attached to the carbon atom are different, the carbon atom is called assymnietric carbon or stereocentre. The assymmetry of the molecule is responsible for optical activity.

Enantiomers:
Stereo isomers related to each other as non-super impossible mirror images of each other and which rotate the plane polarised light equally but in opposite directions.

They have identical physical properties. They only differ with respect to the rotation of plane polarised light. If one of the enantiomers is dextrorotary, the other will be laevo rotatory.

(iii) Retention of configuration:
preservation of integrity of the spatial arrangement of bonds to an asymmetric centre during a chemical reaction or transformation. e.g. XCabc is converted into YCabc

SN2 & SN1 Reactions of Optically Active Alkyl Halides: The product formed as a result of SN2 mechanism has the inverted configuration as compared to the reactant because the Nu attaches itself on the side opposite to the one where the halogen atom is present. SN1 reactions are accompanied by racemisation due to planar structure of carbocation.

2. Elimination Reactions:
When a haloalkanes with β – H atom is heated with alcoholic solution of KOH, there is elimination of H from β – C and a halogen atom from the α – C. Since β – H atom is involved in elimination, it is called β – elimination.

Saytzeff Rule or (Zaitsev Rule):
In dehydrohalogenation reactions, the preferred product is that alkene which has the greater number of alkyl groups attached to the doubfy bonded carbon atoms. i.e., the more substituted alkene is the major product.

b. Reactions of Haloarenes:
Aryl halides are extremely less reactive towards SN reactions due to the following reasons:
(i) Resonance effect:

(ii) Difference in Hybridisation of C in C – X bond:

(iii) Instability of phenyl cation: the phenyl cation formed as a result of self-ionization will not be stabilized by resonance.

(iv) Steric repulsion: it is less likely for the electron-rich nucleophile to approach electron-rich arenes.
Replacement by Hydroxyl Group:

The presence of an electron-withdrawing group (-NO2) at 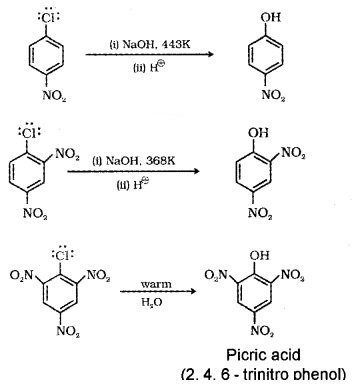 3. Reaction with Metals:
Wurtz – Fittig Reation:
A mixture of an alkyl halide and aryl halide gives an alkylarene when treated with sodium in dry ether.

Fittig Reaction:
Aryl halides when treated with sodium in dry ether, diaryls are formed in which the aryl groups are joined together.

Polyhalogen Compounds
(1) Dichloromethane (Methylene Chloride), CH2Cl2:
Used as a solvent, as a paint remover, as propellent in aerosols and in manufacture of drugs. It is harmful to human central nervous system. It causes dizziness, nausea, direct contact with the eyes can burn the cornea.

(2) Trichloromethane (Chloroform), CHCl3:
Employed as a solvent for fats, alkaloids. It was once used as general anaesthetic. Inhaling it depresses central nervous system. It is slowly oxidised by air in presence of light to form an extremely poisonous gas, carbonyl chloride known as phosgene. Hence it is stored in dark coloured bottles completely filled so that air is kept out.

(3) Tniodomethane (Iodoform), CHl3:
Used as antiseptic in earlier times. The antiseptic properties is due to liberation of free iodine.

(5) Freons:
The chloroflurocarbon compounds of methane and ethane are collectively known as freons. Freon 12 (CCl2Fl2) is one of the most common freons in industrial use. It causes ozone depletion.

(6) DDT – Dichlorodiphenyltrichloroethane:
First chlorinated organic insecticides. It is effective against mosquito, lice. The chemical stability of DDT and its fat solubility are the main problems. DDT is not metabolised very rapidly by animals; instead, it is deposited and stored in the fatty tissues. 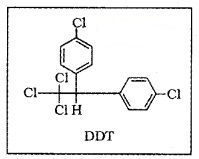