Classification of Solids:
1. Crystalline Solids :
The constituent particles are well orderly arranged. It has long range orcfe/-which means that there is a regular pattern of arrangement of particles which repeats itself periodically overthe entire crystal, e.g. NaCl, Quartz.

Difference between Crystalline and Amorphous Solids 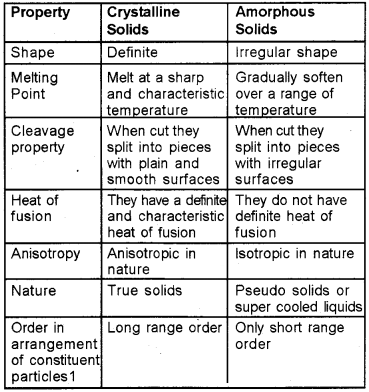 Classification of Crystalline Solids:
Crystalline solids can be classified on the basis of nature of intermolecular forces operating in them into four categories.

Molecular Solids :
In this, molecules are the constituent particles, they are of three categories:

a. Non-polar Molecular Solids :
They are formed by the regular arrangement of either atoms or non-polar molecules held by weak dispersion forces or London forces. They have low melting points and are liquids or gases at room temperature and pressure, e.g. solid forms of argon, He, H2 and Cl2, l2.

b. Polar Molecular Solids :
In these polar molecules are held by relatively stronger dipole-dipole interaction. They are soft and non-conductors of electricity e.g. solid forms of HCl, SO2, NH3.

c. Hydrogen bonded Molecular Solids :
Strong H- bonding binds the molecules of these solids. They are non-conductors of electricity and are volatile liquids or soft solids.
e.g. Ice (Solid H2O)

Ionic Solids :
In these ions are held together by strong coulombic (electrostatic) forces. They are hard and brittle in nature and have high melting point and boiling points. They are electrical insulators in the solid stale, but in molten state/solutions conduct electricity because ions become free to move.
e.g. NaCl, KCl, KNO3 etc.

Metallic Solids :
In these positive ions are surrounded by and held together by a sea of free electrons. These free and mobile electrons are responsible for high electrical and thermal conductivity. Due to this mobile electrons metals have lustre and colour, e.g. Gold, Silver etc.

Covalent or Network Solids:
They have covalent bonds between adjacent non-metal atoms which are held strongly in their positions. They have high melting points and are insulators, e.g. Diamond, SiC Graphite is an exceptional case – it is soft and conducts electricity due to its typical layer structure.

Crystal Lattice and Unit Cells
The three-dimensional arrangement of constituent particles in a crystal, represented by points is called crystal lattice/space lattice.

Unit Cell:
The smallest repeating portion of space lattice/crystal lattice. A unit cell is characterised by,
1. The distance along with three edges: a, b & c
2. Angle between the edges:
α (between b & c)
β (between a & c)
γ (between a & b)

Primitive and Centred Unit Cells
a. Primitive Unit Cell :
the constituent particles are present only on the corner positions of unit cell. 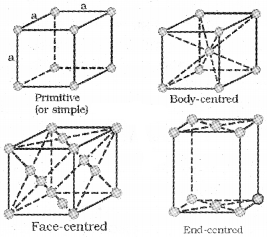 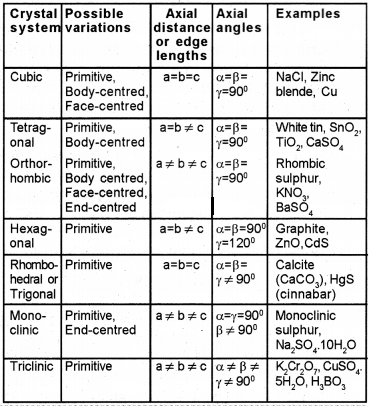 Number of Atoms in a Unit Cell
1. Primitive Cubic Unit Cell or Simple Cubic Unit Cell:
Primitive cubic unit cell has atoms only at its corner. Each atoms at a corner is shared between eight adjacent unit cells. Therefore the contribution of an atom/molecule to a particular unit cell is 1/8

2. Body Centred Cubic Unit Cell (bcc):
In bcc unit cell, particles are present not only at the eight corners but also at the centre of the cube.

3. Face Centred Cubic Unit Cell :
A fee unit cell contains atoms at all the corners as well as at the centre of 6 faces of the cube. The atoms at the face centre is shared between two adjacent unit cells and the contribution is only ½ to the unit cell.

a. Close Packing in One Dimension :
In this arrangment, each sphere is in contact with two of its neighbours. The cordination number is two.

b. Close Packing in Two Dimensions :
Two-dimensional close packing can be done in two different ways:

i. Square Close Packing (scp):
The second row is placed in contact with the first one such that the spheres are exactly above those of the first row. The spheres of the two rows are aligned horizontally as well as vertically. Each sphere is in contact with four of its neighbours. Thus coordination number is 4. This is also known as AAA type arrangment.

ii. Hexagonal Close Packing (hep) :
The spheres in every second row are placed in the depressions of the first row. The spheres in the third row are seated in the depressions of the second row and so on. The fourth layer is aligned with the second layer. Hence this type of arrangement is of ABAB type. Each sphere is in contact with 6 neighbouring spheres. Thus the C.N. is 6.

c. Close Packing in Three Dimensions :
i. Three-dimensional close packing from two-dimensional square close-packed layers :
the second layer is placed over the first layer such that the spheres of the upper layers are exactly above those of the first layer. Here, spheres of both the layers are perfectly aligned horizontally as well as vertically. This type of arrangement has AAA type pattern. This arrangement generates the simple cubic lattice.

The vaccant space/sites in close-packed structure are called voids/interstitial voids.

If ‘N’ is the number of spheres in close packed structure,

b. Placing third layer over the second layer :
If particles in the third layer are arranger) in the tetrahedral voids, the spheres of the third layer are exactly aligned with those of the first layer. Thus, the pattern of spheres is repeated in alternate layers. This is known as ABAB or hexagonal close packed (hep) structure, e.g. Mg, Zn, Cd etc.

If particles in the third layer are arranged in the octahedral voids, spheres of the fourth layer are aligned with those of the first layer. Thus, ABCABC … arrangement is obtained. This is known as cubic close packed (ccp) structure or face-centred cubic (fee) structure, e.g. Cu, Ag, Au etc.

Both the hep and ccp are highly efficient and 74% space in the crystal is filled. Coordination number is 12 in either of these two structures.

Packing Efficiency
It is the percentage of total space filled by the particles.
Let ‘a’ be the edge length of a unit cell and ‘r’ the radius of sphere.

Packing Efficiency in ccp and hep Structures:
In the case of ccp and hep, the edge length, 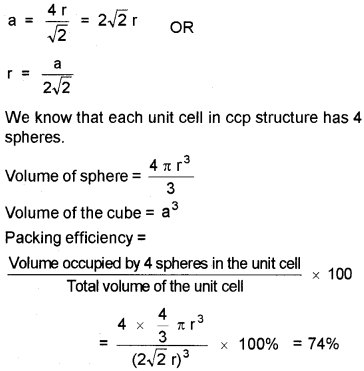 Packing Efficiency of Body Centred Cubic Structures :
In this case radius of a sphere,

Packing Efficiency in Simple Cubic Lattice :
In simple cubic lattice edge length, ‘a’ and radius of the sphere ‘r’ are related as,
a = 2r
r = a/2
We know that a simple cubic unit cell contains only one sphere.

a. Stoichiometric Defects:
These are the point defects that do not disturb the stoichiometry of the solid. They are also called intrinsic or thermodynamic defects. These are of two types:
i. Vacancy Defect:
When some of the lattice sites are vacant (missing of constituent particles), the crystal is said to have vacancy defect. As a result density of the substance decreases.

There are two types of stoichiometric defects in ionic solids : Schottky Defect and Frenkel Defect.

Schottky Defect:
It arises due to the missing of equal number of cations and anions from their normal positions leaving behind a pair of holes. It is observed in ionic compounds having high coordination numberwith ions of almost similar size. Since equal number of cations and anions are missing they maintain electrical neutrality. Density of the substance decreases.
e.g. NaCl, KCl, CsCl and AgBr. 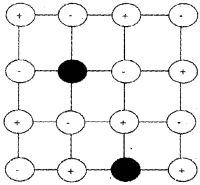 Frenkel Defect:
It arises due to an ion, usually cation which is dislocated from its normal site to an interstitial site. It creates a vaccancy defect at its original site and an interstitial defect at its new location. This is also called dislocation defect. It is usually observed in ionic compounds having low coordination number and crystals with anions much larger in size than the cations. Since no ions are missing, density of the solid does not change, e.g. ZnS, AgCI, AgBrandAgl.
Note: AgBr shows both Schottky as well as Frenkel defects. 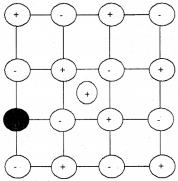 Note: AgBr shows both Schottky as well as Frenkel defects.

b. Impurity Defects :
Defect caused by foreign ions. e.g. If molten NaCl containing a little amount of SrCl2 is crystallised, some of the sites of Na+ ions are occupied by Sr2+. Each Sr2+ replaces two Na+ ions. It occupies the site of one Na+ ion and the othersite remains vaccant. The cationic vaccancies thus pro duced are equal in number to that of Sr2+ ions. Another example is the solid solution of CdCl2 and AgCl.

c. Non-Stoichiometric Defects:
The stoichiometry of the crystal is altered due to defects. These defects are of two types:
i. Metal Excess Defect
ii. Metal Deficiency Defect

i. Metal Excess Defect
1. Due to anionic vacancies :
A compound may have excess of metal ion if a negative ion is absent from its lattice site leaving a hole which is occupied by electron. The anionic sites occupied by unpaired electrons are called F-centres. (German word Farbenzenter means colour centre). These can impart colourto the crystal by excitation of electrons when they absorb energy from visible light, e.g. When crystals of NaCl are heated in an atmosphere of Na vapour, F-centres are formed. As a result, the crystal has an excess of sodium which imparts yellow colour.
Excess Li in LiCl – imparts pink colour
Excess K in KCl – imparts violet(lilac) colour 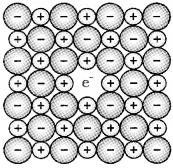 2. Metal excess defect due to extra cations at interstitial sites :
Here, electrical neutrality is maintained by the presence of an electron in the interstitial site. e.g. Zinc oxide (ZnO) is white in colour at room temperature. On heating it loses O2 and turns yellow.

ii. Metal Deficiency Defect
1. Due to cation vaccancies:
A positive ion is missing from its lattice postion and the extra negative charge thus created is balanced by the adjacent metal ion which attains one additional positive charge.
e.g. FeO. It is mostly found with a composition of Fe0.95O. In crystal of FeO some Fe2+ cations are missing and the loss of positive charge is made up by the presence of required number of Fe3+ ions. As a result, the crystal has metallic lustre. Other example is FeS (fool’s gold).

Properties of Solids
Electrical Properties :
Solids can be classified into 3 types on the basis of their conductivities.

Conduction of Electricity in Metals :
Metals conduct electricity in solid as well as molten state through movement of electrons. The conductivity of metals depend upon the number of valence electrons available per atom. The atomic orbitals of metal atoms form molecular orbitals which are so close in energy to each other as to form a band. If this band is partially filled or if overlap with a higher energy unoccupied conduction band, then the electrons can flow easily under an applied electric field. 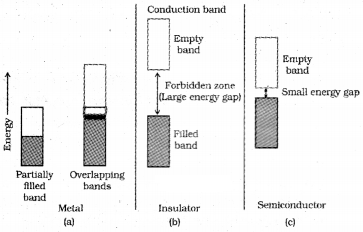 The conductivity of intrinsic semi conductors is increased by adding appropriate amount of suitable impurities, which introduce electronic defects. This process is called dopping. It can be done in two ways:

Magnetic Properties :
Every substance has some magnetic properties associated with it. Each electron in an atom behaves like a tiny magnet. Its magnetic moment originates from two types of motions.
i. Electron’s orbital motion around the nucleus
ii. Electron’s spin around its own axis
Magnetic moment is measured in Bohr magneton
(B.M), µB. 1 B.M. = 9.27 × 10-24 A m2
Magnetic properties are of 5 types:

i. Paramagnetism :
It is due to the presence of one or more unpaired electrons. Paramagnetic substances are weakly attracted by a magnetic field.
e.g. O2, Cu2+, Fe3+, Cr3+ Ni2+, VO, VO2, CuO, NO

ii. Diamagnetism :
It is due to paired electrons in the substance. Diamagnetic substances are weakly repelled by a magnetic field.
e.g. H2O, NaCl, C6H6, TiO2, N2

iii. Ferromagnetism :
It is considered as an extreme case of paramagentism and is caused by spontaneous alignment of magnetic domains (metal ions grouped into small regions) in the direction of the magnetic field. Ferromagnetic substances are strongly attracted by magnetic field. They retain a permanent magnetism even when the field is removed, e.g. Fe, Co, Ni, Alloys of Fe, Co and Ni, CrO2 Once such a material is magnetised, it remains permanently magnetised.
Alignment of magnetic moments: ↑↑↑↑↑↑