Animal Husbandry
It is the agricultural practice of breeding and raising livestock which deals with the care and breeding of livestock like buffaloes, cows, pigs, horses, cattle, sheep, camels, goats, etc., that are useful to humans.

a. Dairy Farm Management:
It is the management of animals for milk and its products for human consumption. Diairyfarm management includes processes and systems that increase yield and improve quality of milk.
It includes

b. Poultry Farm Management:
It is the management of chicken, ducks, turkey and geese for food or their eggs.

Recently, the spread of ‘bird flu virus’ affected the egg industy and chicken consumption. The causative virus is H5N1.

2. Animal Breeding:
It aims for increasing the yield of animals and improving the desirable qualities of the produce.
The term ‘breed’ refers to a group of animals related by descent and similar in general appearance, features, size, configuration, etc.

When breeding is between animals of the same breed it is called inbreeding, while crosses between different breeds are called outbreeding.

The progenies are evaluated and superior among them are identified for further mating.

The strategy used for developing purelines in cattle is the same as Mendel was practiced. Thus inbreeding is necessary for evolving a pureline in any animal. Inbreeding increases homozygosity.

It exposes harmful recessive genes that are eliminated by selection. It also helps in the accumulation of superior genes and elimination of less desirable genes. But the continued inbreeding reduces fertility and productivity. This is called inbreeding depression.

It is overcome by mating with unrelated superior animals of the same breed. This is usually helps to
restore fertility and yield.

Out-breeding
It is the breeding of the unrelated animals of the same breed (but having no common ancestors), or between different breeds (cross-breeding) or different species (inter-specific hybridisation).

(A) Out-crossing:
It is mating of animals within the same breed, but having no common ancestors on either side of their pedigree up to 4-6 generations. The offspring produced called as out-cross. It is the method used for increasing milk production, growth rate in beef cattle, etc.

(B) Cross-breeding:
It is the method of mating superior males of one breed with superior females of another breed. The progeny hybrid animals are used for commercial production.
Eg-Hisardale is a new breed of sheep developed in Punjab by crossing Bikaneri ewes and Marino rams.

Interspecific hybridisation
It is the method of mating of male and female animals of different species, the progeny shows combined desirable features of both the parents with economic value, e.g., mule.
Mule: 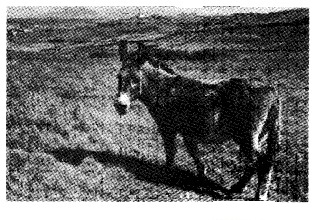 Controlled breeding experiments are carried out using artificial insemination. The semen is collected from the male parent and injected into the reproductive tract of the selected female.

Semen can be stored in freezing state and used later. Artificial insemination helps to overcome several problems of normal matings.
To improve chances of successful production of hybrids, other technique is used.

Multiple Ovulation Embryo Transfer Technology (MOET)
In this method, a cow is given hormones, with FSH-like activity, to induce follicular maturation and super ovulation, it produce 6 – 8 eggs/cycle. This animal isthen mated with an elite bull or artificially inseminated. The fertilised eggs at 8 – 32 cells stages, are removed and transferred to surrogate mother.

The genetic mother is available for another round of super ovulation. This technology is useful for cattle, sheep, rabbits, buffaloes, mares, etc.

3. Bee-keeping
Bee-keeping or apiculture is an age-old cottage industry for the maintenance of hives of honeybees for the production of honey. Honey is a food of high nutritive value and used in medicine. Beeswax, obtained from them are used in the preparation of cosmetics and polishes. It is an income-generating industry.

Bee-keeping can be practiced in the area having wild shrubs, fruit orchards and cultivated crops grows.
The most common species used is Apis indica.
For successful bee-keeping it requires

Bees are the pollinators of many crop species such as sunflower, Brassica, apple and pear. Keeping beehives in crop fields during flowering period increases pollination efficiency and improves the crop yield and honey yield.

4. Fisheries
It is an industry for the catching, processing or selling offish, shellfish or other aquatic animals. Some of the freshwater fishes Catla, Rohu and common carp and the marine fishes Hilsa, Sardines, Mackerel and Pomfrets are commercially important.

Fisheries provides income and employment to millions of fishermen and farmers Aquaculture and pisciculture is used to increase the production of aquatic plants and animals Increasd production offish and their products are coming under blue Revolution’.

Plant Breeding
This technology aims to increase yields .Here Green Revolution plays an important role to meet the national requirements in food production .This is achieved through development of high-yielding and disease resistant varieties in wheat, rice, maize, etc.

1. What is Plant Breeding?
It is the purposeful manipulation of plant species to create desired plant types that are good for cultivation, better yields and disease resistant. Major food crops of today are developed from domesticated varieties that obtained from conventional plant breeding practices.

(ii) Evaluation and selection of parents:
The selected plants with desirable combination of characters are multiplied and used in the process of hybridisation.

(iii) Cross hybridisation among the selected parents:
The desired characters from two different plants (parents) are combined and produce hybrids. One parent with high protein quality is combined with disease resistance of other parent. This is a very time-consuming and tedious process because the pollen grains from the male parent are collected and placed on the stigma of female parent.

(iv) Selection and testing of superior recombinants:
It is the testing of progeny that have the desired character combination. This step yields plants that are superiorto both of the parents.

(v) Testing, release and commercialisation of new cuttivars:
The newly selected progenies are evaluated for their yield, quality, disease resistance, etc. It is done by growing these plants in the research fields and recording their performance under ideal fertiliser application, irrigation, and other crop management practices.

The evaluation is followed by testing the materials in farmers fields, for at least three growing seasons at several locations in the country. These progenies are then evaluated in comparison to the best available local crop cultivar.

The agriculture contribution to India’s GDP is 33 percent and employs nearly 62 percent of the population. After India’s independence, the main challenge was to produce food for the increasing population. The development of several high yielding varieties of wheat and rice led to the dramatic increase in food production in our country. This is called as the Green Revolution.

This was due to the development of semi-dwarf varieties of wheat and rice. Nobel laureate Norman E. Borlaug, at International Centre for Wheat and Maize had developed semi-dwarf wheat.

These two species are crossed to get sugar cane varieties combining the desirable qualities of high yield, thick stems, high sugar and ability to grow in the sugar cane areas of north India.

Millets:
The successfully developed millets in India are Hybrid maize, jowar and bajra. They are high yielding and resistant to water stress.

2. Plant Breeding for Disease Resistance:
Breeding of cultivars resistant to disease increases food production. It helps to reduce the dependence on the use of fungicides and bacteriocides. Before breeding, it is important to know about the causative organism and the mode of transmission.

These are either multiplied ordirectly used in breeding. Other breeding methods used are selection amongst somaclonal variants and genetic engineering. 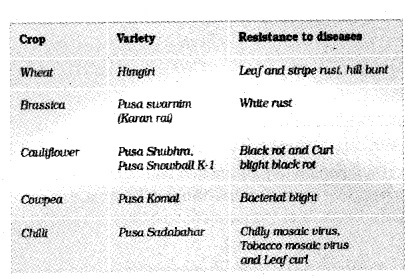 Mutation
It is the method of changing the base sequence within genes resulting in the creation of a new character not found in the parental type. It is done by inducing mutations artificially or by using chemicals or radiations (like gamma radiations), and selecting and using the plants that have the desirable character. This process is called mutation breeding.

Eg-In mung bean, resistance to yellow mosaic virus and powdery mildew were induced by mutations. Wild relatives of cultivated species have resistant characters but very low yield. So it is a need to introduce the resistant genes into the high-yielding cultivated varieties.

3. Plant Breeding for Developing Resistance to Insect Pests:
Insect resistance in host crop plants can be developed in many ways particularly morphological, biochemical or physiological manner.

The above insect resistance is made by hybridization techniques.
Crop varieties resistant to pest

Biofortification
It is the breeding of crops with higher levels of vitamins minerals, proteins and healthier fats.

The Indian Agricultural Research Institute, New Delhi has also released several vegetable crops that are rich in vitamins and minerals.

About 250 Kg cow produces 200 g of protein per day. But 250g of micro-organism like Methylophilus methylotrophus, expected to produce 25 tonnes of protein. Microbes like mushrooms are cultivated in large scale and it is acceptable as food.

Tissue Culture
It is method in which plants are regenerated from explants. The capacity to generate a whole plant from any cell/explant is called totipotency.
Tissue culture medium

Micropropagation
It is the tissue culture method useful for the propagation of a large number of plants in very short durations.

All plants developed are genetically identical to the original plant, i.e., they are somaclones.
Many important food plants like tomato, banana, apple, etc. produced on commercial scale using this method.

Meristem culture
It is tissue culture method in which Healthy plants are developed from diseased plants or infected with a virus.

Here the meristem is taken from apical and axillary part and grow it in vitro to obtain virus-free plants Eg- banana, sugarcane, potato, etc.

Somatic hybridization
Here protoplast is isolated from plants by using enzymes. Isolated protoplasts from two different varieties of plants having desirable character are fused to get hybrid protoplasts, which can be further grown to form a new plant.

These hybrids are called somatic hybrids.
Eg- Protoplast of tomato is fused with that of potato and grown to form new hybrid plants containing the characters of tomato and potato. But here the desired combination of characters are not fully expressed for its commercial utilisation.