Plus Two Botany Organisms and Populations One Mark Questions and Answers

Question 2.
Different types of interactions and the nature of interactions between species A and B are given in column I and II respectively. Choose the correct answer key where they are matched. 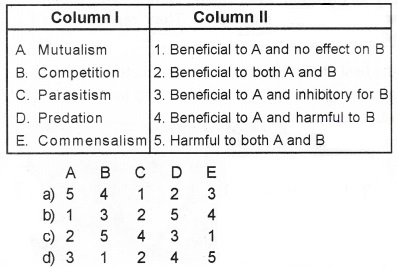 Question 3.
Which one of the following is not used for the construction of ecological pyramids?
(a) Dry weight
(b) Number of individuals
(c) Rate of energy flow
(d) Fresh weight
Answer:
(d) Fresh weight

Question 5.
What is the cause of altitude sickness at high altitudes?
Answer:
Is due to the low atmospheric pressure of high altitudes that the body is unable to get enough oxygen.

Question 12.
Cuscuta and vanda are growing on a mango tree. Which plant makes harm to the mango tree. Justify your answer.
Answer:
Cuscuta makes harm, it is a parasite that derives its nutrition from the host plant.

Question 14.
Parasitic mode of life ensures free lodging and meals. Identify the correct statements related to parasites.
(a) Parasites are not host specific and co-evolved.
(b) Parasites have special adaptations like loss of unnecessary sense organs, presence of suckers, loss of digestive systems, high reproductive capacity.
(c) Lice is an endoparasite.
(d) The female mosquito is a parasite.
Answer:
a, b.

Question 15.
Observe the relationship between the first two terms and fill in the blanks. Hibernation: Bear;……….: Snail
Answer:
Aestivation.

Question 2.
Some organism are different intheirtoleration level to temperature fluctuations

Question 6.
Camouflaging is a method adopted by prey to lessen effect of predatien in animals. List out some mechanisms seen in plant species.
Answer:
Plants have evolved a variety of morphological and chemical defences against their predators (herbi-vores).

Answer:
1. Competitive Exclusion Principle states that the closely related species competing for the same resources cannot co-exist indefinitely The competitively inferior one will be eliminated eventually.

2. In high altitudes there is low oxygen availability. The tribes having high RBC production since the binding capacity of RBC with 02 decreases and ultimately results in high breathing rate.

Question 9.
Tribalsin high altitude are difficult to live in the initial phase of colonization but after few days they are adapted to live.

Question 10.
The relationship between cattle egret and grazing cattle is considered as commensalism. Justify.
Answer:
Cattle egret gets food in the form of insects when the grazing cattle flushes out insects from the vegetation as it moves during grazing. The egret is benefited but there is no harm for the cattle.

Question 11.
Abingdon tortoise and goats are compete with each other in Galapagos Islands for common food finally one of them is eliminated.

Question 12.
Thermoregulation is expensive to small animals like Shrews and Hummingbirds live in colder climates. Do you agree? Give reason.
Answer:
Yes
Their body surface area is large compared to body volume, hence they have to spend more energy to increase metabolic rate when cold outside for producing more heat.

Question 13.
Ophrys is a Mediterranean orchid it’s petals shows resemblance to female be in colour size and markings but a male bee come into the flower and pollinate

Question 16.
Use proper terms of the statement given below.

Question 17.
The integral form of the exponential growth equation is Nt = N0ert. Expand the symbols in this equation.
Answer:

Question 18.
In rocky intertidal communities of the American Pacific Coast the starfish Pisasterwere removed for an experimental purpose.

Answer:
1. Pisaster is an important predator in the intertidal area. When Pisasters were removed, more than 10 invertebrate species became extinct because of interspecific competition.

2. important role of predators in nature:

Question 19.
Match A with B based on mutualism.

Question 20.
Define commensalism and write any two examples.
Answer:
Interaction in which one species benefited and the other is neither harmed nor benefited.
Example – Cattle egret and grazing cattle Sea anemone and clownfish.

Question 21.
Adaptations may be morphological, physiological or behavioural. Write the behavioural adaptations in desert lizard.
Answer:
Desert lizards bask in the sun and absorb heat when their body temperature drops below the comfort zone They move into shade when the temperature starts increasing.

Question 1.
Given below is the bar diagram showing the age structure of three countries. Answer the following questions by analyzing the diagram. 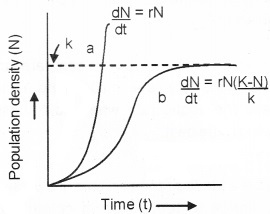 3. It reflects the growth status

2. The female wasp lays its egg in the ovary locule and uses the developing seeds within the fruit for nourishing its larvae. The wasp pollinates the fig inflorescence while searching for suitable egg laying sites.

Question 5.
Analyze the given graph which represents the population growth curve. 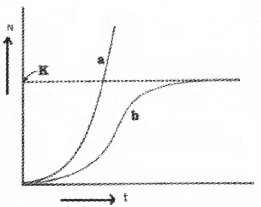 Question 6.
Observe the flow chart given below and answer the following questions. 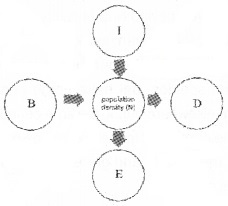 Question 7.
Analyse the given graph and answer the following questions. 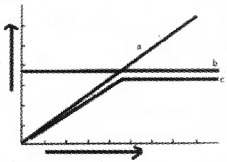 Question 8.
Fill in the blanks. 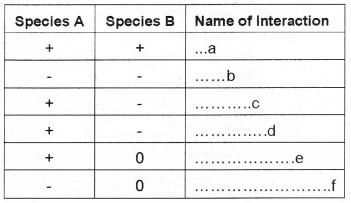 For examples, if a person has ever been to any high altitude, on visiting such as place he or she must have altitude sickness because body does not get enough oxygen. But gradually he or she gets acclimatized and stop experiencing altitude sickness.

Question 3.
List the attributes that populations but not individuals possess.
Answer:

Question 5.
Name important defence mechanisms in plants against herbivory?
Answer:
Leaves modified into thorns, development of spiny margins on the leaves. Many plants produce and store chemicals that make the herbivore sick.

Question 6.
An orchid plant is growing on the branch of mango tree. How do you describe this interaction?
Answer:
It is an example of commensalism, where the or-chid gets space (benefitted) but the mango tree is neither benefited nor harmed.

Question 6.
A lake near a village suffered heavy mortality of fishes within a few days. Consider the following reasons for this
I) Lots of urea and phosphate fertilizers were used in the crops in the vicinity.
II) The area was sprayed with DDT by an aircraft
III) The lake water turned green and stinky.
IV Phytoplankton populations in the lake declined initially thereby greatly reducing photosynthesis. Which two of the above were the main causes of fish mortality in the lake?
(a) II, III
(b) III, IV
(c) I, III
(d) I, II
Answer:
(d) I, II

Question 8.
If the strong partner is benefitted and the weak partner is damaged. It is known as
(a) predation
(b) alleloathy
(c) symbiosis
(d) commensalisms
Answer:
(a) predation

Question 9.
Competition of species leads to
(a) extinction
(b) mutation
(c) greater number of niches are formed
(d) symbiosis
Answer:
(a) extinction

Question 10.
Which of the following statement regarding species interdependence are true?
I. An association of two species where one is benefitted and other remain unaffected is called mutualism.
II. An interspecific association where both partners derive benefit from each other is called commensalism.
III. A direct food relation between two species of animals in which one animals kills and feeds on another is referred as predation.
IV. A relationship between two of organisms where both the partners are benefitted from each other is called symbiosis.
(a) I and II only
(b) III and IV only
(c) I and III only
(d) II and III only
Answer:
(b) III and IV only

Question 15.
Few organisms can tolerate and thrive in a wide range of temperatures they are called as
(a) eurythermal
(b) stenothermal
(c) euryhaline
(d) stenohaline
Answer:
(a) eurythermal

Question 20.
Mammals of colder climates have shorter ears and limbs to minimise heat loss. This is come under
(a) Allen’s Rule
(b) bergmans rule
(c) jordans rule
(d) none of the above
Answer:
(a) Allen’s Rule