Question 1.
Given below in the diagram showing the transfer of pollen grains. (MARCH-2010)
i) Identify a & b with technical terms.
ii) Critically evaluate a & b. 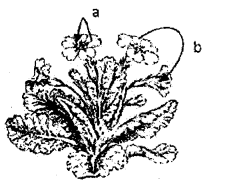 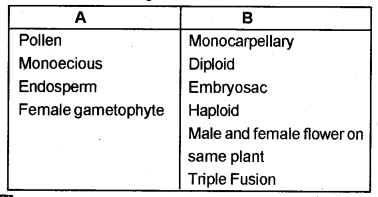 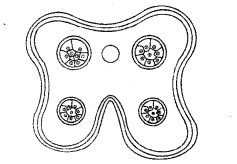 Copy the picture given above and mark the following:  (MARCH-2011)
a) Connective tissue
b) Endothecium
c) Tapetum
d) Sporogenous tissue
Answer:

Question 5.
Transfer of pollengrains from the anther to the sitgma of a flower is called pollination. Grass plants generally have small, inconspicuous flowers while plants belonging to many angiosperm families bear conspicuous coloured flowers. (MARCH-2011)
a) Comment on the type of pollination taking place in these two groups.
b) What are the salient features present in these two groups for effective pollination?
Answer:
a) 1) Wind pollination
2) Pollination by biotic agents

b) Floral features of wind pollination :-

Question 6.
After fertilization in flowering plants, seeds bearing embryos are found inside the fruits. If seeds are developed from ovules. (MARCH-2011)
a) Name the parts that given rise to embryo and fruits.
b) What is the thick wall of the fruit that is protective in function called?
Answer:
a) Zygote -> Embryo
Ovary -> Fruit
b) Pericarp

Question 7.
Teacher wrote the steps of a crop improvement programme on the blackboard as follows: (MAY-2011)
Bagging
Emasculation
Arrange the steps in correct order, explain them and name the process of crop imdorvement programme with the given steps.
Answer:
Emasculation
Bagging
If the female parent bears bisexual flowers, removal of anthers from the flower bud before the anther dehisces This step is called emasculation. Emasculated flowers have to be covered with a bag of suitable size prevent the contamination of its stigma with unwanted pollen. This process is called bagging.
The above two process are coming under Artificial Hybridisation

Question 8.
+2 students of a school at Kasargod district on their study tour collected flowers showing the following character
1) Flowers are with light pollen grains. (MAY-2011)
2) Colourful flowers.
3) Nectar producing flowers.
4) Flowers with feathery stigma.
a) Arrange the characters underdifferent pollination groups in the given table.
b) Write the name of 2 flowers pollinating through water. 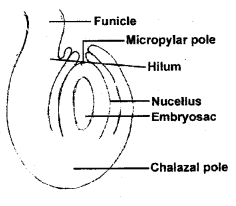 Question 11.
In large number of plants, pollination is carried out by insects. List four characters of flowers that helps insect pollination. (MAY-2012)
Answer:
Characters of entamophilous flowers.
1) Flowers are large, colourful, fragrant and rich in nectar.
2) small flowers are clustered into an inflorescence to make them conspicuous.

Question 13.
In artificial hybridization, it is important to make sure that sigma is protected from unwanted pollen. This is achieved by emasculation and bagging techniques. Can you explain, how emasculation and bagging techniques are performed? (MAY-2012)
Answer:
Anthers are removed before the dehiscence of anther of female parent that bears bisexual flowers. This step is called as emasculation.
It is covered with a bag of suitable size, to prevent contamination of its stigma with unwanted pollen. This process is called bagging.

Question 14.
After syngamy and triple fusion in embryosac, embryo will be diploid and endosperm will be ________. (MARCH-2013)
Answer:
Triploid

Question 17.
The diagramatic view of a typical anatropous ovule is show below. Copy the diagram and label the unlabelled parts. (MAY-2013)

Question 18.
In flowering plants, double fertilization occurs during sexual reproduction. One of the events of double fer-tilization is triple fusion. Name the other event. (MAY-2013)
Answer:
Syngamy. (Fusion of egg cell with male gamete that leads the formation of zygote)

Question 21.
Sunflower is pollinated by insects while rice is pollinated by wind.  (MARCH-2014)
a) How these plants are adapted to their respective type of pollination method? (Hint-any 4 points)
b) Plants can be self or cross pollinated. Write any two mechanisms existing in nature to promote cross pollination.
(OR)
a) The diagram given below shows the transverse section of a young anther. Identify the parts a, b, c and d. 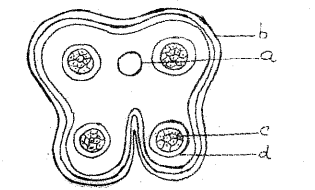 The developmental stages of male gametes in plants consist of microsporogenesis and male ga- metophyte. Arrange the following terms in their correct developmental sequence.
Pollen grain
Sporogenous tissue
anther
microspore tetrad
pollen mother cell
male gamete.
Answer:
Adaptation for wind pollination
1) The pollen grains are light and non-sticky
2) They possess well-exposed stamens and feathery stigma
Adaptation for insect pollination
1) Insect-pollinated flowers are large, colourful, fragrant and rich in nectar.
2) The flowers are small, a number of flowers are clustered into an inflorescence
b) 1) pollen release and stigma receptivity are not at the same time.
2) Anther and stigma are placed at different positions so that the pollen cannot come in contact with the stigma of the same flower. Both these devices prevent autogamy.
(OR)
a) a-connective
b- epidermis
c – sporogenous tissue
d-Tapetum
b) Anther -> sporogenous tissue —> pollen mother cell —> microspore tetrad —> pollen grain —> malegamete

Question 22.
Most of the plants produce single type of flowers but Viola, Commelina and Oxalis produce two type of flowers. Explain. (MAY-2014)
Answer:
Chasm ogamous
Flowers with exposed anthers and stigma.
Cleistogamous
Flowers which do not open at all. In such flowers, the anthers and stigma lie close to each other. These flowers are example for autogamous flowers (self pollination)

Question 23.
Egg cell formation in angiosperms involves me- gasporogenesis and female gametophyte development. (MAY-2014)
a) Briefly write the various steps involved in female gametophyte development.
b) Mature angiosperm embryosac at maturity, though 8 nucleated is 7 celled.
What is your explanation related to this statement? Explain.
Answer:
a) Single megaspore mother cell (MMC) in the micropylar region of the nucellus undergoes meiotic division results in the production of four megaspores. In a majority of flowering plants, one of the megaspores is functional while the other three degenerate. Only one functional megaspore develops into the female gametophyte (embryo sac).

Question 24.
Development of fruit without fertilization and are seedless known as ______. (MARCH-2015)
a) Polyembryony
b) Apomixix
c) Parthenocarpy
d) Parthenogenesis
Answer:
Parthenocarpy

Question 25.
Given below are the components related to simplified model of mineral cycling in a terrestrial ecosystem. Construct a flow chart. (MARCH-2015)
(Hint: Weathering of rock) 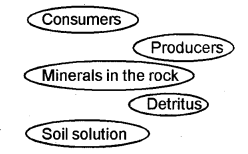 Question 26.
a) Reeja a science student observed the structure of mature embryosac comprising antipodals, central cells and egg apparatus. Explain each one of them. (MARCH-2015)
(OR)
b) Three different flowers are given to you in the practical class.
i) Maize
ii) Vallisneria
iii) Rose
You are asked to group them based on pollinating agents. Describe the adaptations of each flower related with the agents of pollination.
Answer:
The typical female gametophyte or embryo sac is 8-nucleate and 7-celled.
2 polar nuclei are situated below the egg apparatus in the large centraftfell.
Three cells are grouped together at the micropylar end and constitute the egg apparatus. The egg apparatus consists of two synergids and one egg cell.
The synergids have special cellular thickenings at the micropylar tip called filiform apparatus, which play an important role in guiding the pollen tubes into the synergid.
Three cells are at the chalazal end and are called the antipodals.
(OR)
1) Maize wind pollination
a. The pollen grains are light and non-sticky
b. They possess well-exposed stamens and feathery stigma
2) Vallisneria water pollination
a. Water pollinated flowers are not very colourful and do not produce nectar.
b. Pollen grains are protected from wetting by a mucilaginous covering
3) Rose Insect polination
a. Insect-pollinated flowers are large, colourful, fragrant and rich in nectar.
b. The flowers are small, a number of flowersare clustered into an inflorescence.

Question 28.
In some seeds the nucellus may be persistent. Such nucellus is called _______. (MARCH-2016)
a) Endosperm
b) Scutellum
c) Plumule
d) Perisperm
Answer:
d) Perisperm

Question 29.
What is a false fruit ? Cite an example. (MARCH-2016)
Answer:
Fruit is developed from parts of flower other than ovary.
Eg. apple and strawberry

Question 30.
Many of the flowering plants have developed some devices for discouraging in breeding. Write any two of them. (MARCH-2016)
Answer:
Self incompatibility
Production of unisexual flowers

Question 32.
Which of the following part in a flower is haploid? (MAY-2016)
a) Antherwall
b) Pollen mother cell
c) Synergid
d) Secondary nucleus
Answer:
c) Synergid 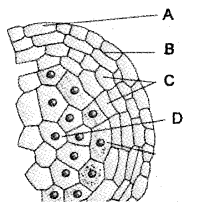 Question 34.
In aquatic plants like water hyacinth and water Lily the pollinating agent is ________. (MAY-2016)
a) Wind and insect
b) Water
c) Birds and butterflies
d) Aquatic organisms
Answer:
a) Wind and insect

Question 35.
A date palm seed discovered during archeological investigation retained viability even after 10000 years. The retention of viability is due to the state of inactivity of embryo called ________. (MARCH-2017)
Answer:
Dormancy

Question 36.
When the pollen is transferred from anther to the stigma of the same flower, the pollination is called autogamy.
a) Cleistogamous flowers are invariably autogamous. Explain. (MARCH-2017)
b) Geitonogamy is functionally cross pollination, but genetically similar to autogamy. Justify the statement.
Answer:
a) In this, flowers are not open pollen falls to the stigma of the same flower and seed setting takesplace without the influence of external agency.
b) In geitonogamy transfer of pollen grains from the anther to the stigma of another flower of the same plant.
Functionally geitonogamy is a type of cross pollination but it is genetically similar to autogamy since the pollen grains come from the same plant.

Question 38.
Nature has mechanisms to promote outbreeding in plants. Explain any two mechanisms existing in plants to promote outbreeding. (MARCH-2017)
Answer:
1) Anther and stigma are placed at different positions so that the pollen cannot come in contact with the stigma of the same flower.
2) Self-incompatibility is the genetic mechanism in which pollen cannot germinate on the stigma of the same flower or other flowers of the same plant by inhibiting pollen germination or pollen tube growth in the pistil.

Question 39.
Rose is a flower pollinated by insect while in paddy pollination is by wind. Give any three adaptations existing in these plants to facilitate their respective mode of pollination. (MAY-2017)
(OR)
(B) Double fertilization and triple fusion are the two terms associated with angiosperm fertilization.
a) What is double fertilization?
b) Explain triple fusion.
c) Give the ploidy level of
i) endosperm
ii) zygote
Answer:
(A) Pollination in Rose
1. Flowers are large and colourful
2. They are fragrant and rich in nectar
3. Pollen grain are sticky
Pollination in Paddv
1. Pollen grains are light weight and non-sticky.
2. They possess well-exposed stamens
3. They possess feathery stigma.
(OR)
(B) a) It is the fertilization take place in two times. It involves syngamy and triple fusion.
b) It is the fusion of two polar nuclei and male gametes and results primary endosperm nucleus (PEN)
c) i) endosperm – 3n
ii) zygote-2n

Question 40
Identify the following parts of a dicot embryo. (MAY-2017) 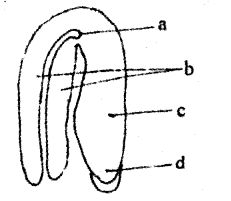