Question 2.
Given below are 3 gametes a, b and c. a and b gametes undergoes fusion. (MARCH-2010)
a) Identify the fusion. 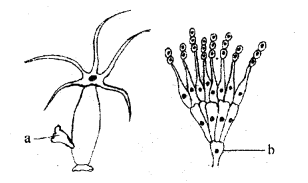 b) Give the explanation for the identification.
Answer:
a) Isogamy
b) Fusion of two morphologically similar gametes (male & female) is called Isogamy

Question 3.
Raman is learning the post-fertilization changes of an angiosperm embryo sac with the help of slides. He identified the egg nucleus and polar nuclei with the help of his teacher. (MARCH-2010)
a) Name the other nuclei present in the embryo sac.
b) Help Raman by giving the changes that takes place with egg nucleus and polar nuclei after fertilization.
Answer:
a) Antipodals and synergids
b) Egg nucleus + Sperm -> Sygote (2n)
Polar nuclei + Sperm -> PEN (3n) primary endosperm nucleus.

Question 5.
Farmers are propagating plants using vegetative structures. Can you mention the names of any two such structures. (MAY-2010)
Answer:
Rhizome – Ginger
Bulb – Onion

Question 7.
You are asked to plant ginger in your home. Which part of ginger you will plant? Name the type of reproduction. (MAY-2011)
Answer:
Underground stem
Asexual reproduction

Question 8.
In asexual reproduction, off springs are produced by a single parent with or without the involvement of gamete formation.(MARCH-2012)
Name the asexual reproductive structures (a & b) given below.
Answer:
a) Bud
b) conidia

Question 10.
In honey bees and some lizards,female gamete undergoes development to form new organisms without fertilization. This phenomenon is called ________. (MARCH-2013)
Answer:
Parthenogenesis

Question 12.
Match the following terms with regard to vegetative reproduction in plants. (MAY-2013)

Question 13.
a) Amoeba asexually multiplies by binary fission whereas Sponge by _______ (MAY-2014)
b) Water hyacinth vegetatively multiples by offset agave by ______
Answer:
a) Gemmule
b) Bulbil

Question 15.
a) Yeast asexually multiples by budding whereas Penicillium by. (MAY-2015)
b) Bryophyllum vegetatively multiples by adventitious buds water hyacinth by
Answer:
a) Conidia
b) offset/stem

Question 17.
When a gamete without any fusion develop into a new organism the phenomenon is called ______. (MARCH-2016)
a) Syngamy
b) External fertilization
c) Parthenogenesis
d) Parthenocarpy
Answer:
c) Parthenogenesis

Question 19.
Select the one which is not helping vegetative propagation. (MAY-2016)
a) Bulb
b) Clone
c) Adventitious
d) Eyes of the potato
Answer:
b) Clone

Question 20.
The plant in which adventitious buds along the mar¬gin of leaves give rise to new plants is (MARCH-2017)
a) Water Hyacinth
b) Agave
c) Bryophyllum
d) Dahlia
Answer:
Bryophyllum