How To Analyse Chemical Composition?
Take any living tissue (a vegetable or a piece of liver, etc.) and grind it in trichloroacetic acid (Cl3CCOOH) using a mortar and a pestle. A thick slurry is formed. Then it is passed through a cheesecloth or cotton getting two fractions. 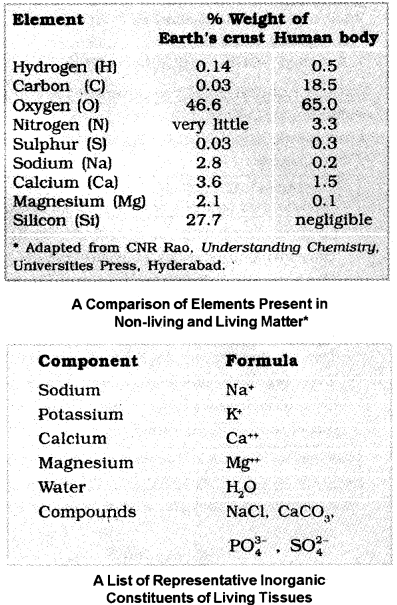 Organic compounds under biological view are classified into

Based on the nature of the R group there are many amino acids. However, those which occur in proteins are only of twenty-one types.
The R group maybe

Based on number of amino and carboxyl groups, there are

Fatty acid:
It has a carboxyl group attached to an R group.
The R group could be Biomacromolecules:
The acid insoluble fraction, has only four types of organic compounds i.e., proteins, nucleic acids, polysaccharides and lipids. These compounds, except lipids, have molecularweights in the range often thousand daltons and above.

Lipids, whose molecularweights do not exceed 800 Da, come under acid insoluble fraction. Hence Lipids are not macromolecules.

Proteins carry out many functions in living organisms:

2. Forexamplecellulose(homopolymer)is a polysaccharide consist of only one type of monosaccharide i.e. glucose.

3. Starch is storehouse of energy in plant tissues but animals have glycogen as energy source.

4. Inulin is a polymer of fructose. 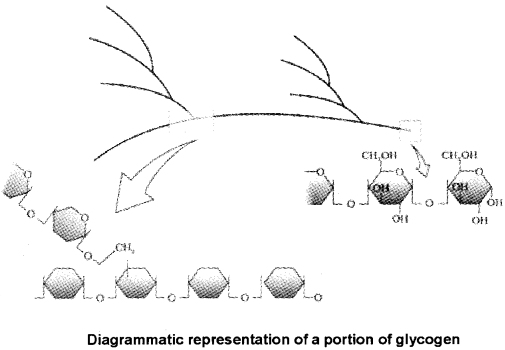 Nucleic Acids:
Nucleic acids are another macromolecule found in the acid-insoluble fraction of living tissues. For nucleic acids, the building block is a nucleotide.

The sugar found in polynucleotides is either ribose (a monosaccharide pentose) or 2’ deoxyribose. 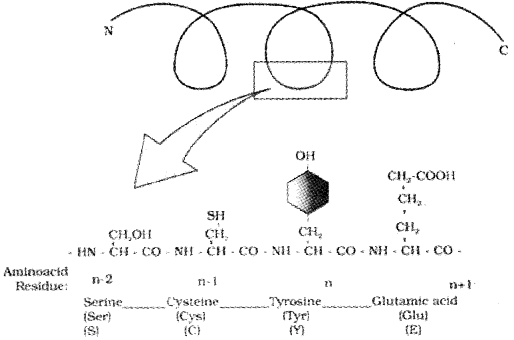 Primary structure of a portion of a hypothetical protein. N and C refer to the two termini of every protein. Single letter codes and three-letter abbreviations for amino acids are also indicated. 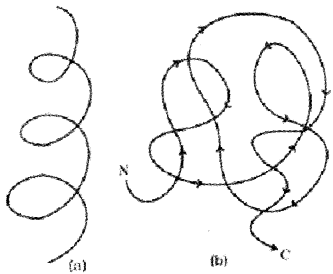 Nature Of bond linking Monomers In A Polymer:
1. Peptide bond:
In a protein, amino acids are linked by a peptide bond which is formed when the carboxyl (—COOH) group of one amino acid reacts with the amino (-NH2) group of the next amino acid with the elimination of a water.

2. Glvcosidic bond:
In a polysaccharide the individual monosaccharides are linked by a glycosidic bond. This bond is also formed by dehydration. Metabolic reactions and transformation of biomolecules:

Which is the energy currency of a cell?

Metabolism provides a mechanism for the production of energy. Hence the living state and metabolism are synonymous. Without metabolism there cannot be a living state.

Chemical Reactions:
Chemical compounds undergo two types of changes.
1. Physical change:
It involves the change in shape without breaking of bonds. eg: when ice melts into water, or when water becomes a vapour.

Role of enzvme in the rate of chemical reaction:
In the absence of any enzyme this reaction is very slow, with about 200 molecules of H2CO3 being formed in an hour. But using an carbonic anhydrase, the reaction speeds dramatically with about 600,000 molecules being formed every second.

The enzyme has accelerated the reaction rate by about 10 million times. A multistep chemical reaction, when each of the steps is catalysed by the same enzyme complex or different enzymes, is called a metabolic pathway.

How do Enzymes bring about High Rates of Chemical Conversions?
The chemical which is converted into a product is called a ‘substrate’. Hence enzymes, i.e. proteins with three dimensional structures including an ‘active site’ convert a substrate (S) into a product (P).

The x-axis represents the progression of the structural transformation or states through the ‘transition state’. If ‘P’ is at a lower level than ‘S’, the reaction is an exothermic reaction one need not to supply energy (by heating) in order to form the product.

However, whether it is an exothermic or spontaneous reaction or an endothermic or energy requiring reaction, the ‘S’ has to go through a much higher energy state or transition state. The difference in average energy content of ‘S’ from that of this transition state is called ‘activation energy’.

Enzymes bring down energy barrier making the transition of ‘S’ to ‘P’ more easy. Catalysed reactions proceed at rates faster than that of uncatalysed ones. 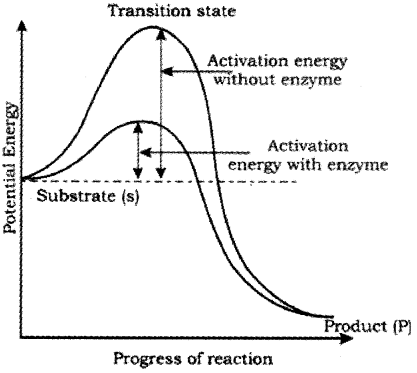 Each enzyme (E) has a substrate (S) binding site in its molecule so that a highly reactive enzyme-substrate complex (ES) is produced. This complex is short-lived and dissociates into its products.

The catalytic cycle of an enzyme action can be described in the following steps:

Enzyme inhibition:
When the binding of the chemical shuts off enzyme activity, the process is called inhibition and the chemical is called an inhibitor. When the inhibitor closely resembles the substrate in its molecular structure and inhibits the activity of the enzyme, it is known as competitive inhibitor. eg: Inhibition of succinic dehydrogenase by malonate which closely resembles the substrate succinate in structure. Such competitive inhibitors are often used in the control of bacterial pathogens.

Classification and Nomenclature of Enzymes:
Enzymes are divided into 6 classes.
1. Oxidoreductases/dehydrogenases:
Enzymes which catalyse oxidoreduction between two substrates S and S’ eg:

4. Lyases:
Enzymes that catalyse removal of groups from substrates by mechanisms other than hydrolysis leaving double bonds.

Co-factors:
Enzymes are composed of one or several polypeptide chains and non-protein constituents called cofactors. They are bound to the enzyme to make the enzyme catalytically active. The protein part of the enzymes is called the apoenzyme.
Three kinds of cofactors are

1. Prosthetic groups:
They are organic compounds that are tightly bound to the apoenzyme. For example, in peroxidase and catalase, which catalyze the breakdown of hydrogen peroxide to water and oxygen. Haem is the prosthetic group and it is a part of the active site of the enzyme.

2. Co-enzymes:
They are also organic compounds loosely bound to apoenzyme for catalysis. Co-enzymes serve as co-factors in a number of different enzyme-catalyzed reactions. Many coenzymes are vitamins eg: coenzyme nicotinamide adenine dinucleotide (NAD) and NADP contain the vitamin niacin.

2. Metations:
Zinc is a cofactor for the proteolytic enzyme carboxypeptidase. Catalytic activity is lost when the co-factor is removed from the enzyme.

Plus One Zoology Notes