Question 3.
Observe the figure. (MARCH-2011)
No need to redraw the figure.

Label A and B and write the function of A and B.
Answer:
A – Proximal convoluted Tubule (PCT)
B – Collecting duct.
Functions:
A- Essential nutrients, 70-80% electrolytes and water are reabsorbed.
B- Reabsorption of water and urea to maintain os- molarity or secretion of H+ and K+ Ions. 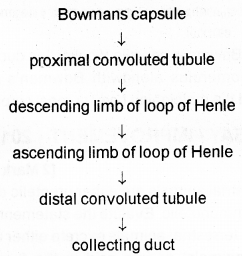 Question 5.
Complete each of the following sentences using appropriate words. (MARCH-2012)
a) Ascending limb of Henle’s loop is ……….. to water whereas the descending limb is ……… to water.
b) An excessive loss of fluid from the body stimulates the hypothalamus to release ……… hormone from the …………
Answer:
a) Impermeable, Permeable
b) Antidiuretic hormone, Pituitary

Question 7.
How does the countercurrent mechanism help to maintain the concentration gradient in the medullary interstitium? (SAY-2012)
Answer:
Mechanism of countercurrent in vasa recta or Henle’s loop makes the difference in osmolarity in glomerular filtrate, blood and interstitium.

Question 8.
On a hot day would you expect your level of ADH in blood to be high or low? Explain. (SAY-2012)
Answer:
ADH increases. It promotes reabsorption of water.

Question 9.
In a Biology class related to excretion in the human body, a student gave an opinion that in every minute about 2% of the total blood volume of the body is converted to GFR whereas only 1% of this GFR is eliminated as urine. Evaluate this opinion and substantiate your answer. (MARCH-2013)
Answer:
In healthy individual the GFR is approximately 125 ml/minute ie, 180 Ltrs. per day. It means that out of 5.5 Ltrs. of blood volume 1.5 Ltrs. per day urine is formed. This is due to re-absorption. 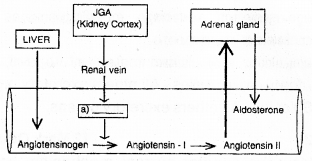 Question 11.
The output of urine increases in cold days while de-creases in hot and sunny days. Can you give a rea-son for this phenomenon as realized from the graph given below? (MARCH-2014) 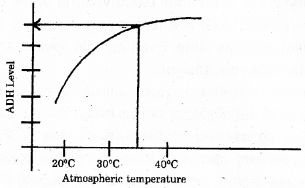 Question 12.
A diagrammatic representation of a nephron is given. (SAY-2014)
a) Identify the parts labelled as X and Y.
b) Which part/parts of a nephron constitute the malpighian body? 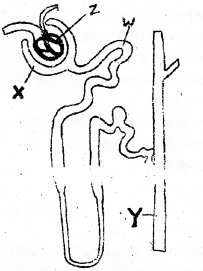 Answer:
a) X-Bowmans capsule Y-collecting duct
b) Glomerulus along with Bowman’s capsule is called the malpighian body or renal corpuscle

Question 14.
“The functioning of human kidney is efficiently monitored and regulated by hormonal actions of hypo-thalamus pituitory, JGA and to a certain extent by heart.” (MARCH-2016)
a) Do you agree with ,th is statement?
b) Justify your answerwith suitable reasons.
Answer:
a) yes
b) ADH It affect the kidney function by constricting effects on blood vessels – helps in water reabsorption
JGA is found in the distal convoluted tubule.A fall in GFR can activate the JG cells to release renin which can stimulate the glomerular blood flow.
ANF – It can cause vasodilation (dilation of blood vessels) and thereby decrease the blood pressure.

Question 15.
Uricotelism is more advantageous than ureotelism and ammonotelism in strictly terrestrial animals on the basis of water conservation in the body. Justify. (SAY-2016)
Answer:
Uric acid is the least toxic
It is the terrestrial adaptation and minimum water loss occurs

Question 16.
Prepare two matching pairs from the given list of animals and excretory organs. (MARCH-2017)