Question 1.
A schematic sketch representing the alimentary canal of a cockroach is given below. Fill the boxes with the appropriate organs from the list. No need to redraw the diagram.(MARCH-2010)
Crop
Salivary gland
Gizzard
Rectum
Malpighian tubule
Hepatic caeca 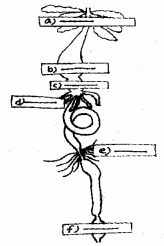 Question 2.
Analyze the circulatory system of the animal. (SAY-2010) a) Identify and write the peculiarity of the system.
b) Label the parts marked as a1 and b1
Answer:
a) Male reproductive system
Male reproductive organs consist of a pair of yellowish ovoid testes, which are found adhered to the upper part of kidneys by a double fold of peritoneum called mesorchium.
b) a1) Urino genital duct b1)Cloaca

Question 6.
Observe the following figure. No need to redraw the diagram. (MARCH-2011)

a) Label the parts, A and B.
b) Write the function of ‘B’.
Answer:
a) (i) Nucleus
(ii) Intercalated disc.
b) Allow the cells to contract as a unit by passing the signals to adjacent cells.

Question 9.
Facts related to two types of tissues are given below. Arrange them in two columns by giving suitable headings. Mention the location of each tissue in the human body. (MARCH-2012)
A sheath of tough connective tissue
Striations absent
Bundled together in a parallel fashion
Fusiform shape
Involuntary in function
Striated appearance
Answer:

Question 10.
The structural and functional abilities of earthworms are helpful for it to become ‘friends of farmers’. Evaluate this statement and substantiate your answer. (SAY-2012)
Answer:
Structural feature
The mouth parts leads to gizzard which help in the griding of soil particles and decaying leaves.
Functional feature
It helps in respiration and penetration of developing roots. It also helps to increase the fertility of soil. 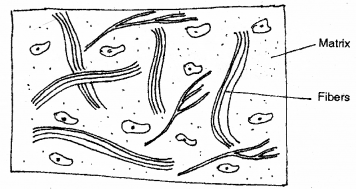 a) Identify the type of the tissue.
b) The fibers in this tissue help the tissue to perfom its function. Substantiate.
Answer:
a) Connective tissue orareolartissue.
b) Fibers provide strength

Question 12.
a) Arrange the following organs in the antero-posteral order of the earthworm body : (MARCH-2013)
Intestinal caeca, gizzard, blood glands, testes, ovary, clitellum
b) Vermicomposting is an advanced strategy in agriculture. What capabilities of the earthworm are utilized in this strategy?
Answer:
a) blood glands-gizzzard-testis-ovary-clitellum-intes- tinal caeca
b) Burrows in the soil makes it porous and worm casting

Question 13.
Features of a particular tissue visible through a mi-croscopic observation is presented here : (SAY-2013)
Cells are closely arranged.
Intercellular matrix absent.
Cells are supported by basement membrane.
a) Identify the animal tissue.
b) Classify this tissue based on the number of cell layers.
c) Mention their functions.
Answer:
a) Epithelial tissue
b) Simple epithelium and compound epithelium
c) It functions as a lining or covering for body cavities, ducts and tubes 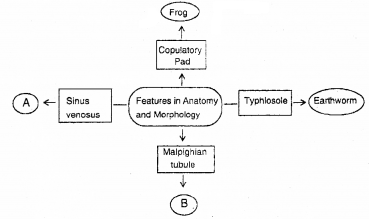 a) Name the animal A and B.
b) Write one function of any two structures given in the boxes.
Answer:
a) A — Frog B — Insect
b) Malpigian tubule — Excretory organ
Typhlosole — Increase effective area of absorption in intestine
Copulatory pad — It helps in copulation

Question 15.
Where do you find the following structures in a human body? (MARCH-2014)
a) Collagen fibres
b) Axons
c) Squamous epithelium
d) Smooth muscles
Answer:
a) Connective tissue or cartilage
b) Neuron or Nerve fibre
c) Lung alveoli or blood vessel
d) Viscera or internal organs

Question 18.
Mention the function of the following : (SAY-2014)
a) Blood glands of‘Pheretima’
b) Hepatic caeca of ‘Periplaneta americana’.
Answer:
Blood glands are present on the 4th, 5th and 6th segments. They produce blood cells and haemoglobin which is dissolved in blood plasma. Hepatic caeca or gastric caecae is present at the junction of foregut and midgut, which secrete digestive juice.

Answer:
a) Cell membrane (Out of syllabus)
b) They are found in the walls of blood vessels and air sacs of lungs and are involved in a function diffusion.

Question 21.
Select the odd one out in the following series.  (SAY-2015)
a) Areolartissue; Blood; Neuron; tendon
b) Hypopharynx: Malpighian tubules; Maxillae; Labrum
Answer:
a) Neuron
b) Malphigian tubules

Question 22.
In a laboratory session your Biology teacher exhibited blood smears (slides) of cockroach and human beings under microscope. How will you distinguish them based on the nature of plasma and blood cells? (SAY-2015)
Answer:
The blood of cockroach (haemolymph) is composed of colourless plasma and haemocytes.
In humans blood is a special connective tissue consisting of a fluid matrix, plasma, and formed elements.Blood contains pigment called haemoglobin.

Question 23.
Observe the following chart and answer the given questions: (MARCH-2016) 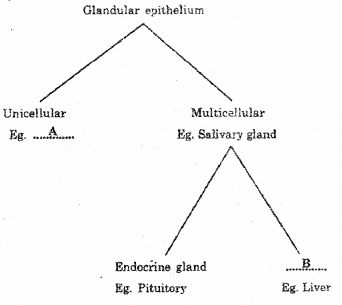 Fill in the missing words A and B.
Answer:
A-Goblet cell
B- Exocrine gland

Question 24.
a) Identify the given diagrams of connective tissues A and B (SAY-2016)

Question 27.
Complete the given branching diagram based on connective tissue. (MARCH-2017)