Question 1.
A student placed man and house fly in the following taxonomic categories. Some of them are wrongly placed. Identify and correct them. (SAY-2010)

Question 4.
During the field trip a group of students collected some organisms with the following characters. Help them to identify the phyla of those organisms. (SAY-2011)
a) Dorsoventrally flattened and leaf like body.
b) Jelly like body with eight ciliated combplates.
c) Body covered with calcareous shell.
d) Spiny skinned body with radial symmetry.
Answer:
a) phylum platihelminthes
b) phylum ctenophore
c) phylum mollusca
d) phylum Echinodermata

Question 7.
After completing a project study based on diversity of spiders, the specimens were intended to be stored for future reference. Select a suitable taxonomical and from the following for the preservation of specimens. (MARCH-2013)
a) Herbarium
b) Museum
c) Zoological park
d) Sanctuary
Justify your answer.
Answer:
b) museum

Question 9.
Select the correct generic name and specific epithet from the table given below and write the scientific name of a housefly. (SAY-2014) 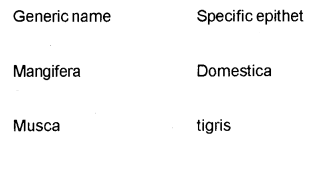 Question 11.
A student conceived the rules of binomial nomenclature as follows. If you find any mistakes in the underlined portions, correct them with appropriate words. (SAY-2015)
a) The first word in biological name represents species and begins with a capital letter.
b) The second word represents genus and begins with a small letter.
Answer:
a) The first word is genus name start with capital letter
b) The second word is species name start with small letter

Question 12.
During the adventurous trip a plus one student got a skull and skeletal part of rare animal from the Chinnar forest.
Select the suitable location for keeping it from the list of taxonomic aids given below. (MARCH-2016)
(Herbarium, Museum, Zoological park, Botanical garden)
Answer:
Museum