Question 4.
If the zero of potential energy is at infinity, the total energy of an orbiting satellite is negative of its ……… energy.
Answer:
Kinetic energy

Question 5.
What is the time period of a second’s pendulum?
Answer:
2s 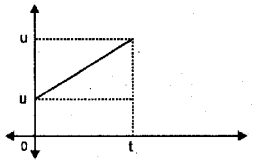 Question 8.
Write the work done in each of the following cases as zero, positive or negative.
a) Work done by centripetal force in circular motion.
b) Work done by friction.
c) Work done by gravitational force on a freely falling object.
d) Work done by the applied force in lifting an object.
Answer:
a) Zero
b) Negative
c) Positive
d) Positive

Question 9.
Derive an expression for the escape velocity of an object from the surface of a planet.
Answer:
Force on a mass m at a distance r from the centre of earth = \(\frac{\mathrm{GMm}}{\mathrm{r}^{2}}\)
Work done for giving small displacement dr,
dw = \(\frac{\mathrm{GMm}}{\mathrm{r}^{2}} \mathrm{dr}\)
Work done in taking the body to infinity from surface of earth, 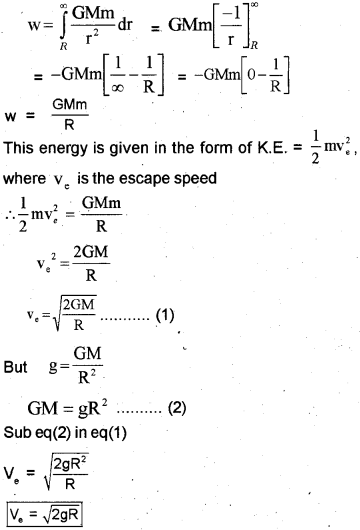 Question 10.
A typical stress-strain graph of a metallic wire is shown below.
a) Write the name of the point B labelled in the graph.
b) For the materials like copper the points D and E are ……(close/far apart) 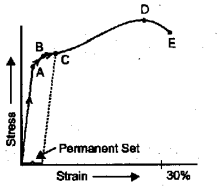 Answer:
a) Yield point or elastic limit
b) Far apart

Question 12.
A body falling under the effect of gravity is said to be in free fall.
a) Draw the velocity-time graph for a freely falling object.
b) Define uniform acceleration.
c) From the given figures which represents uniformly accelerated motion.

b) A body is said to be in uniform acceleration if velocity changes equally in equal intervals of time. It means acceleration is constant. eg. free fall
c) Figure 3 Question 15.
A device used to lift automobiles is shown in the figure.
a) Write the name of the device.
b) In the situation shown in the figure, mass of the car is 3000 kg and are of the piston carrying it is 425 cm2. What pressure is to be applied to the smaller piston? 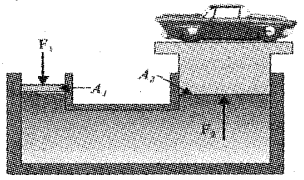 Question 16.
Based on the kinetic theory of gases, derive an expression for the pressure exerted by an ideal gas.
Answer:

Consider molecules of gas in a container. The molecules are moving in random directions with a velocity V. This is the velocity of a molecule in any direction. The velocity V can be resolved along x, y and z directions as Vx, Vy, and Vz respectively. If we assume a molecule hits the area A of container with velocity Vx and rebounds back with -Vx. (The velocities Vx and Vy do not change because this collision is perfectly an elastic one).
Therefore, the change in momentum imparted to the area A by the molecule = mvx – -mVx
= 2mVx

To find the total number of collisions taking place in a time t, consider the motion of the molecules towards the wall. The molecules covers a distance Vxt along the x direction in a time t. All the molecules within the volume AVxt will collide with the area in a timet.

If ‘n’ is the number of molecules per unit volume, the total number of molecules hitting the area A,
N = AVxt n
But on an average, only half of those molecules will be hitting the area, and the remaining molecules will be moving away from the area. Hence the momentum imported to the area in a time t
Q = 2mvx × \(\frac{1}{2}\)AVxtn
= nmVx2At
The rate of change of momentum,
\(\frac{Q}{t}\)
But rate of change of momentum is called force, ie. force F = nmVx2A
∴ pressure P = nmVx2A
Different molecules move with different velocities. Therefore, the average value V2x is to betaken. If \(\overline{\mathrm{v}}_{\mathrm{x}}^{2}\)
V2x is the average value then the pressure.
p = \(\overline{\mathrm{v}}_{\mathrm{x}}^{2}\) ………..(1)
\(\overline{\mathrm{v}}_{\mathrm{x}}^{2}\) is known as the mean square velocity.
Since the gas is isotropic (having the same properties in all directions), we can write 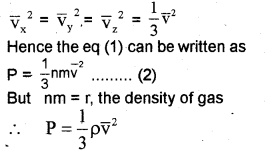 Question 18.
The accuracy in measurement depends on the limit or the resolution of the measuring instrument.
a) State whether the above statement is TRUE or FALSE.
b) A physical quantity P is related to four observables a, b, c and d as P = \(\frac{a^{3} b^{2}}{\sqrt{c d}}\). The percentage errors in measurements of a, b, c and d are 1%, 3%, 2% and 3% respectively. What is the percentage errors in the measurement of P?
Answer: 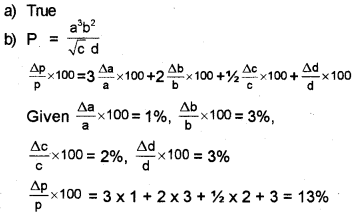 Question 19.
A stone tied to the end of a string 80 cm long is whirled in a horizontal circle with a constant speed.
a) What is the angle between velocity and acceleration at any instant of motion?
b) If the stone makes 14 revolutions in 25s, what is the magnitude of acceleration of the stone?
Answer: 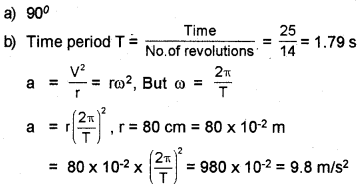 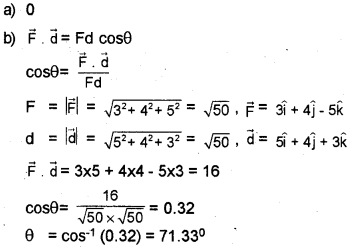 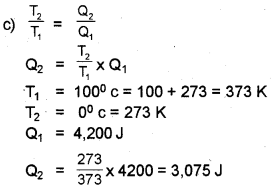 Question 22.
a) Which one of the following relationships between the acceleration (a) and the displacement (x) of a particle involve simple harmonic motion?
i) a = 0.7x
ii) a = -200x2
iii) a = -10x
iv) a = 100x3
b) A simple harmonic motion is represented as x = A cosωt. Obtain the expression for velocity and acceleration of the object and hence prove that acceleration is directly proportional to the displacement.
Answer:
a) iii) a = -10x
b) The y displacement of S.H.M. is given by
y = asinωt
∴ velocity in y direction 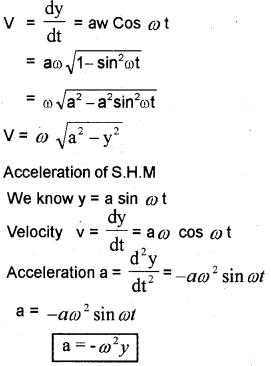 Question 23.
a) What is the condition for the equilibrium of concurrent forces?
b) A mass of 6 kg is supended by a rope of length 2 m from the ceiling. A force of 50 N in the horizontal direction is applied at the midpoint P of the rope a shown. What is the angle, the rope makes with the vertical in equilibrium (Take g = 10ms-2)
Neglect the mass of the rope.
c) What will be the angle made by the rope with the vertical if its length is doubled? 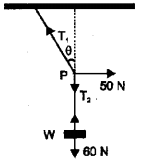 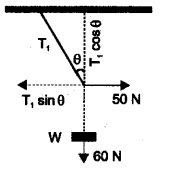 c) No change in angle

Question 24.
a) Write the equation connecting torque with force.
b) A meter stick is balanced at its centre (50 cm).
When two coins each of mass 5 g are put on the top of the other at the 12 cm mark, it is found to be balanced at 45 cm. What is the mass of the stick?
c) Derive the relation connecting torque with angular momentum.
Answer:
a) \(\vec{\tau}=\overrightarrow{\mathrm{r}} \times \overrightarrow{\mathrm{f}}\), τ = rf sinθ
b) 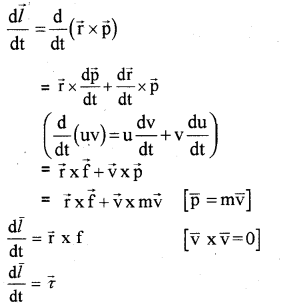 Question 25.
a) Water rises up in a narrow tube inspite of gravity. This phenomenon is called…….
b) Derive an expression for the height of water in the tube in terms of radius of the tube and surface tension of the liquid.
c) Water with detergent dissolved in it should have …. angle of contact, (small/large)
Answer:
a) Capillary rise
b) Expression for capillary rise 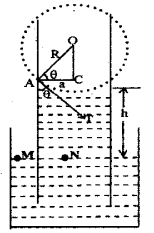 Consider a capillary tube of radius ‘a’ dipped in a liquid of density r and surface tension S. If the liquid has a concave meniscus it will rise in the capillary tube. Let h be the rise of the liquid in the tube. Let p1 be the pressure on the concave side of the meniscus and po, that on the other side. 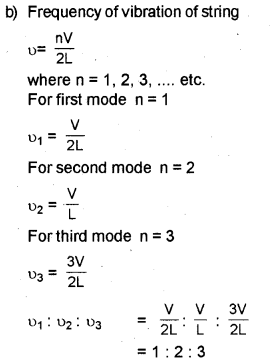