Kerala Plus One Physics Notes Chapter 9 Mechanical Properties of Solids

Summary
Introduction
Elasticity:
The property of a material by virtue of which it regains its original shape on the removal of the deforming force is called elasticity. The deformation caused is known as elastic deformation.

Plasticity:
The property of a material by virtue of which it does not regain its original shape on the removal of the deforming force is called plasticity. The substance which shows this property is called plastic.

Elastic Behavior Of Solids
In a solid, each atoms (or molecule) is surrounded by neighboring atoms (or molecules). These atoms are bonded by inter atomic forces. When a solid is deformed, the atoms are displaced from their equilibrium positions. When the deforming force is removed, the interatomic force bring back atoms into its original position. Thus body regains its original shape and size.

S.I unit of stress is Nm2 or Pascal (Pa) and its dimensional formula is [ML-1 T-2]. The restoring force is equal and opposite to the external applied force.
Strain:
The effect of stress on a body is called strain. Strain is measured as the ratio of the change in dimension produced to the original dimension.

Different types of Stress and Strain:
There are three ways in which a solid may change its dimensions when an external force acts on it. Hence there are three types of stress and corresponding strain.

1. Tensile Stress and Longitudinal Strain:
When the forces acting on the body produces an elongation along its length, then we call the stress as tensile stress (see figure).

If two equal and opposite deforming forces are applied parallel to cross-sectional area of the cylinder as shown in figure, there is a relative displacement between the opposite faces of the cylinder. The restoring force per unit area developed due to the applied tangential force is known as tangential or shearing stress.

As a result of applied tangential force, there is a relative displacement between opposite faces of the cylinder (see figure). The strain so produced is known a shearing strain. Shearing strain can be written as,

Consider a solid placed inside the fluid. The force applied by the fluid acts in perpendicular direction at each point of the surface. This leads to decrease in its volume without any change of its geometrical shape.

Hooke’S Law
Hooke’s law:
For small deformations, the stress and strain are proportional to each other, ie: stress ∝ strain. Stress = k × strain Where k is the proportionality constant and is known as modulus of elasticity. 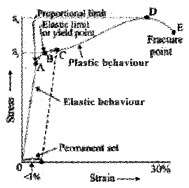 A typical graph for stress – strain graph for a metal is given in the figure.
Region OA:
In the region between O to A, the curve is linear. Hence in this region Hooke’s law is obeyed. The body regains its original dimensions when the applied force is removed. In this region the material behaves as an elastic body.

Region AB:
In this region stress and strain are not proportional. The material returns to its original dimension when the applied force (stress) is removed. The point B in the curve is known as yield point (also known as elastic limit) and corresponding stress is yield strength of the material.

Region BD:
If the applied force exceeds the yield strength, strain increases rapidly for a small change in the stress. When the applied force (stress) is removed at ‘C’, the body does not regain it’s original dimension, (even when the stress is zero, the strain is not zero).

Elastomers:
For rubber-like materials, even for small stress, the strain produced will be very high. Such materials are called elastomers. 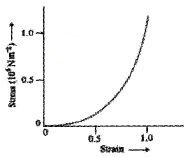 Elastic Moduli
According to Hooke’s law

2. Determination of youngs modulus of the material of a wire:
Experimental setup:

An experimental arrangement to determine the young’s modulus of a wire is shown in the figure. It consists of two long straight wires A and B. (The wire Ais called reference wire and B is called experimental wire).

A millimeter scale (main scale) is fixed near to the wire A. At bottom of wire A there is a pan to place a weight. The wire B also carries a pan in which known weights can be placed. At bottom of wire B, there is a pointer. A vernier scale is attached to this pointer. This vernier scale of B and main scale of A are placed very close to each other.

Determination of Young’s modulus:
Keep the wires (A and B) as straight by placing sufficient load at pans and note down initial reading. Then the experimental wire (B) is loaded with more weights. Note down the reading again. The difference between initial reading and final reading gives the elongation.

Let rand L be the initial radius and length of the experimental wire, then the area of cross-section of the wire is πr2. Let µ be the mass that
produced an elongation ∆L in the wire.

4. Bulk modulus (B):
When a body is immersed in a fluid, it undergoes hydraulic stress (equal in magnitude to the hydraulic pressure.) This leads to a decrease in the volume of the body. This decrease in volume produces a strain is called volume strain.

Poisson’s ratio is a ratio of two strains. Hence it is a pure number and has no units or dimensions.
For steel the value is between 0.28 and 0.30.

Consider a wire of length L and area of cross-section stretched by a force F. Let l be the elongation. Then stretching force increases uniformly from 0 to F. Therefore the average force

Applications Of Elastic Behavior Of Materials 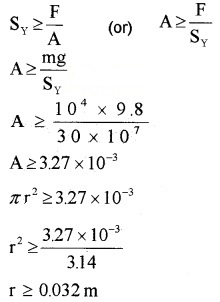 Question 3.
What is meant by buckling?

Answer:
If the load is not properly placed on a beam, the beam will bend side wise as shown in figure. This bending is called buckling.

Question 4.
Why the beams used in construction of bridges have a cross-section of the type I?
Answer:
Consider a solid rectangular beam of length l, breadth b and thickness d. If we place a load Mg at its centre, there will be a depression at the centre.

To reduce the depression at the centre, we have to increase d. But when d is large the beam will buckle unless the load is at the centre. This buckling can be avoided if the beam is given the section of the letter I. Such a beam is called I form girder.
It has following advantages