Kerala Plus One Physics Notes Chapter 6 Work, Energy and Power 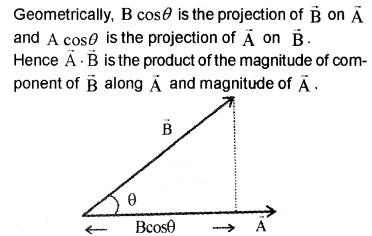 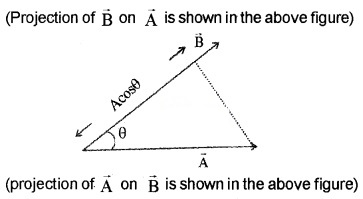 Work Energy Theory
Statement:
The change in kinetic energy of a particle is equal to the work done on it by the net force.
Proof:
We know v2 = u2 + 2as
v2 – u2 = 2as
Multiplying both sides with m/2; we get 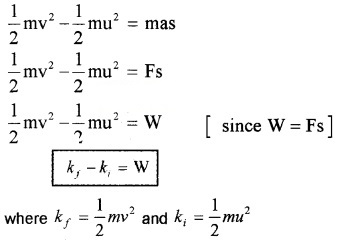 Work
Definition:
The work done by the force is defined as the product of component of the force in the direction of the displacement and the magnitude of this displacement.
Explanation 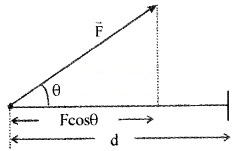 There are three types of workdone

2. Negative workdone:
Work will be negative, if the displacement has a component opposite to the force F. The angle between force and displacement lies between 90° and 180°.
Example

3. Zero work done:
Work will be zero, if there is no component along the direction of force. The angle between applied force and displacement is 90°.
Example
1. When a person carrying a load on his head walks along a level road, the displacement is perpendicular to the force and therefore the work done is zero.

2. In uniform circular motion the centripetal force is along the radius and direction of displacement is along the tangent.

Kinetic Energy
Kinetic energy is the energy possessed by the body because of it’s motion. The kinetic energy of a body of mass m and velocity v, 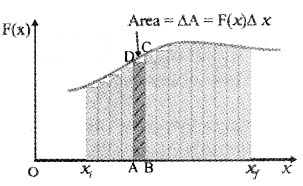 Consider a body moving from xi to xf under a variable force. The variation of force with position is shown in graph. Consider a small AB = Dx. The force in this interval is nearly a constant.

Hence workdone to move a body from A to B is. Dw = F(x) Dx.F(x)dx gives the area of rectangle ABCD. When we add successive rectangular areas, we get total work as

When we take Dx tends to zero, the summation can be replaced integration. 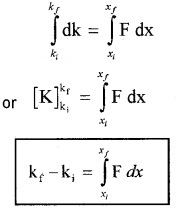 Concept Of Potential Energy
Potential energy of a body is the energy possessed by it because of its position.
Explanation
Considera mass ‘m’on the surface of the earth. If this mass is raised to height ‘h’ against force of gravity,
work done w = Force × displacement
w = mg × h
w = mgh
This work gets stored as gravitational potential energy.
ie; Gravitational energy V = mgh.

1. Relation between gravitational potential and gravitational force:
If we take negative of the derivative of V(h) with respect to height (h), we get 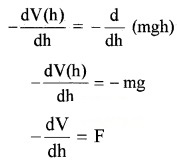 Conservation of mechanical energy for a freely falling body:

Where k is a constant called the spring constant.
Potential energy stored in a spring:

Consider a massless spring fixed to rigid support at one end and a body attached to the other end. The body moves on a frictionless surface.

If a body is displaced by a distance dx, The workdone for this displacement
dw = Fdx
∴ Total work done to move the body from x = 0 to x 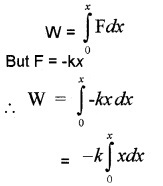 Spring force is a conservative force:
If the spring is displaced from an initial position xi to xf and again to xi; 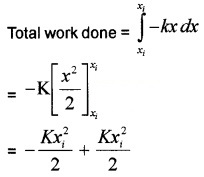 W = 0
This zero workdone means that the spring force is conservative.
Energy of an oscillating spring at any point:

If the block of mass ‘m’ (attached to massless spring) is extended to xm and released, it will oscillate in between +xm and -xm. The total mechanical energy at any point x, (lies between -xm and +xm) is

This block mass ‘m’ has maximum velocity at equilibrium equi¬librium position (x = 0). At this position, the potential energy stored in a spring is completely converted in to kinetic energy. 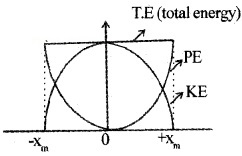 The Law Of Conservation Of Energy
Statement:
Energy cannot be created or destroyed. It can be transformed from one form to another.

Various Form Of Energy
1. Heat:
Heat is one form of energy, it is the internal energy of the molecule.

2. Chemical energy:
Chemical energy arises from the fact that the molecules participating in the chemical reaction have different binding energies.

If the total energy of the reactants is more than the products of the reaction, heat is released and the reaction is said to be exothermic reaction. If the heat is absorbed in chemical reaction it is called endothermic.

5. Nuclear energy:
Nuclear energy is obtained from the sun. In this case four light hydrogen nuclei fuse to form a helium nucleus, whose mass is less than the sum of the masses of the reactants. This mass difference (called the mass defect on) is the source of energy.

Power
Power is defined as the time rate at which work is done.

Expression for power in terms of F and V:
The work done (dw) by a force F for a displacement dr is

Collisions
There are two types of collisions.

2. Collisions in one Dimension:
If the initial velocities and final velocities of both the bodies are along the straight line, then it is called one-dimensional motion. 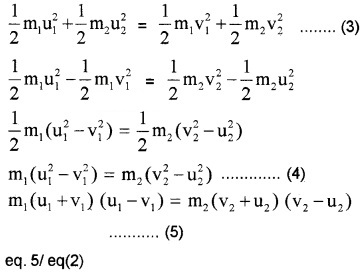 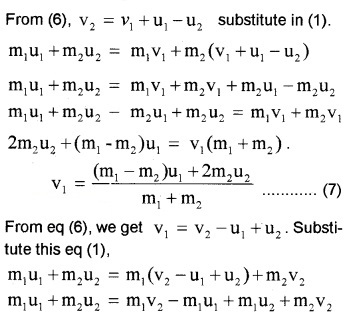 The second body remains at rest while the first body rebounds with the same velocity.
Collisions in Two Dimensions: 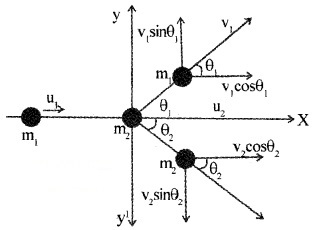