Kerala Plus One Physics Improvement Question Paper Say 2018 with Answers

Question 1.
State TRUE or FALSE
“Some conservation laws are true for one fundamental force, but not for the others”.
Answer:
True

Question 3.
Three objects with a mass of 40kg each are placed in a straight line 50cm apart. What is the net gravitational force at the centre object due to the other two?
Answer:
Zero

Question 6.
A car travelling at a speed 54 km/hr is brought to rest in 90s. Find the distance travelled by the car before coming to rest.
Answer: 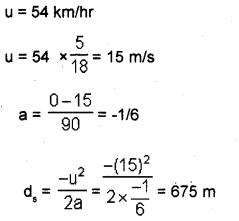 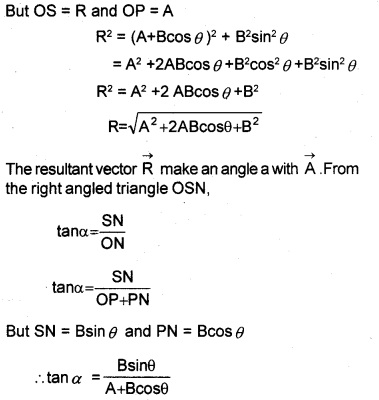 Question 8.
Select the CORRECT alternative.
a) When a conservative force does positive work on a body, the potential energy of the body……….
i) increases
ii) decreases
iii) remains unaltered
b) Work done by a body against friction always results in a loss of its……..
i) kinetic energy
ii) potential energy
c) The rate of change of total momentum of a system of many particle system is proportional to the ……… on the system.
i) external force
ii) sum of the internal forces
d) The quantity which is conserved in an inelastic collision of two bodies is …….
i) total kinetic energy
ii) total linear momentum
Answer:
a) decreases
b) kinetic energy
c) external force
d) total linear momentum 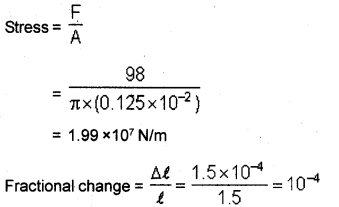 Question 10.
According to the kinetic theory of gases, gas molecules are always in random motion.
a) State the law of equipartition of energy.
b) Write the average value of energy of a molecule for each vibrational mode.
Answer:
a) The total kinetic energy of a molecule is equally divided among the different degrees freedom.
b) E = \(\frac{1}{2}\)KBT × 2 = KBT

Question 12.
An insect trapped in a circular groove of radius 12cm moves along the groove steadily and completes 7 revolutions in 100s.
a) What is the linear speed of the motion?
b) Is the acceleration vector a constant vector? What is its magnitude?
Answer:
a) R = 12 × 10-2m
7 revolutions = 100 sec 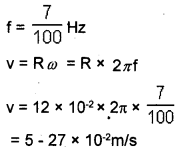 Question 13.
A car and a truck have the same kinetic energies at a certain instant while they are moving along two parallel roads.
a) Which one will have greater momentum?
b) If the mass of truck is 100 times greater than that of the car, find the ratio of velocity of the truck to that of the car.
Answer: 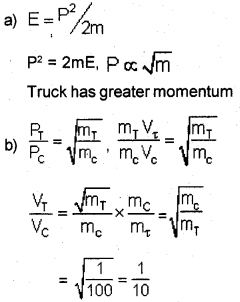 Question 14.
A girl rotates on a swivel chair as shown below. 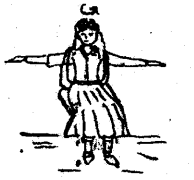 Question 15.
A solid sphere of mass m and radius R starts from rest and rolls down along an inclined plane of height h without slipping as shown below: 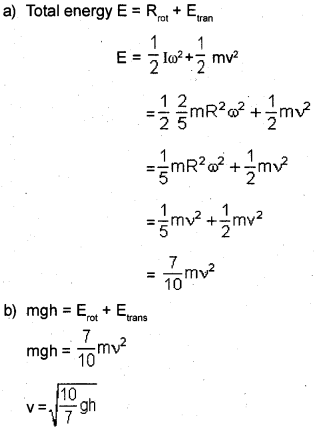 Question 16.
A man jumping out of a slow moving bus falls forward.
a) This is due to ……..
b) Which Newton’s law gives the above concept? State the law.
c) What is the net force acting on a book at rest on the table?
Answer:
a) Inertia/inertia of motion
b) First law of Newton. The law states that every body continues its state of rest or uniform motion along straight line unless it is compelled by an. external unbalanced force to change that state.
c) Zero 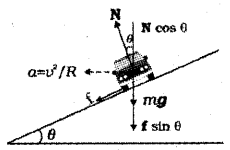 c) Consider a vehicle along a curved road with angle of banking q. Then the normal reaction on the ground will be inclined at an angle q with the vertical. 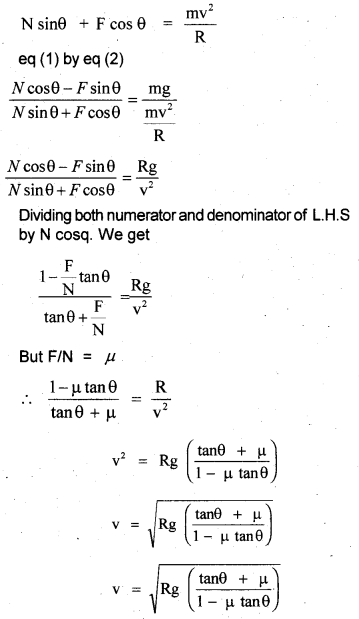 This is the maximum speed at which vehicle can move over a banked curved road.

Question 18.
For a liquid-gas interface, the convex side has a high pressure than the concave side.
a) Derive an expression for excess pressure inside a drop.
b) Which is better, washing of cloth in cool soap water or warm soap water? Why?
Answer: 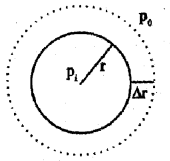 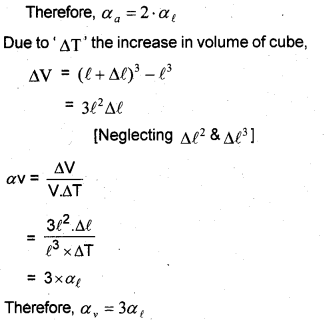 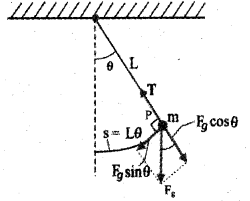 Consider a mass m suspended from one end of a string of length L fixed at the other end as shown in figure. Suppose P is the instantaneous position of the pendulum. At this instant its string makes an angle θ with the vertical.
The forces acting on the bob are (1) weight of bob Fg (mg) acting vertically downward. (2) Tension T in the string.
The gravitational force Fg can be divided into a radial component FgCosθ and tangential component FgSinθ. The radial component is cancelled by the tension T. But the tangential component FgSinθ produces a restoring torque.
Restoring torque τ = – Fg sinθ.L
τ = -mgsinθ.L ………(1)
-ve sign shown that the torque and angular displacement θ are oppositely directed. For rotational motion of bob,
τ = Iα ……….(2)
Where I is moment of inertia about the point of suspension and α is angular acceleration. From eq (1) and eq (2).
Iα = – mgsinθ.L
If we assume that the displacement θ is small, sinθ ≈ θ.
∴ Iα = – mgθ.L 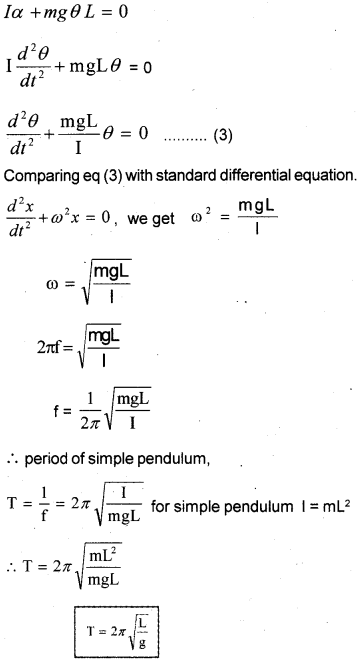 b) Period increases because as temperature increases length of metal wire also increases. 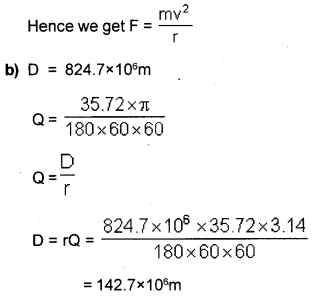 Question 22.
Satellites are objects which revolve around the earth.
a) The direction of revolution of geosynchronous satellite is from ……….
i) east to west
ii) west to east
iii) north to south
iv) south to north
b) Derive an expression for total energy of an orbiting satellite.
c) What is the magnitude of the angular velocity for a geosynchronous satellite?
Answer:
a) West to east
b) The kinetic energy of the satellite in a circular orbit at height h from surface of earth with speed 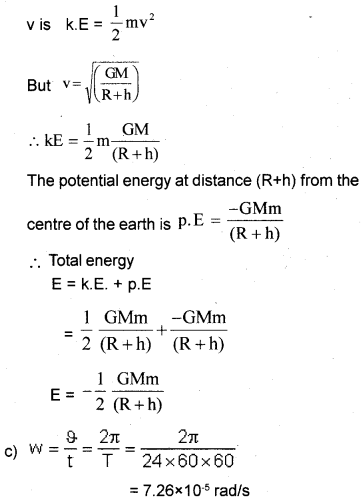 Question 23.
The flow of an ideal fluid in a pipe of varying cross section is shown below. 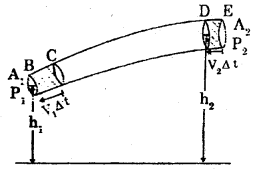 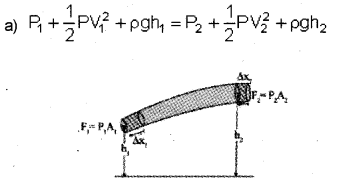 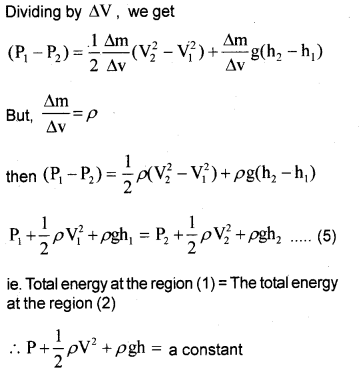 b) Consider a tank containing a liquid of density r with a small hole in its side. Let Y1 be the height of the hole, and y2 be height of water in the tank. Applying Bernoulli’s equation at points (1) and (2) we get 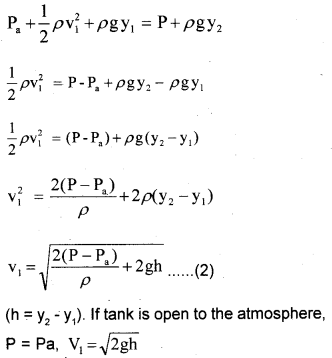 c) Torricelli’s law may be stated as the velocity of afflux through a hole at a depth ‘h’ will be equal to the velocity gained by a freely falling body when it travels a distance ‘h’.
ie; v = \(\sqrt{2 \mathrm{gh}}\)

Question 24.
The basic features of a device are schematically represented in the figure below.

a) Which type of device is this, a heat engine or a refrigerator?
b) Draw the indicator diagram and label the four processes in the Carnot cycle.
c) A steam engine delivers 5.4 × 108J of work per minute and services 3.6 × 109J of heat per minute from its boiler. What is the efficiency of the engine? How much heat is wasted per minute?
Answer: 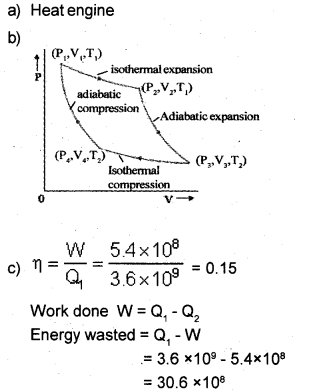 Question 25.
A transverse harmonic wave on a string is described by y(x, t) = 3.0 Sin(36t + 0.018x + π/4) where ‘x’ and ‘y’ are in cm and ‘t’ is in s. The positive direction of ‘x’ is from left to right.
a) Is this a travelling wave or a stationary wave? If it is travelling, what are the speed and direction of its propagation?
b) What are its amplitude and frequency?
c) What is the least distance between two successive crests in the wave?
Answer: