Plus One Physics Oscillations One Mark Questions and Answers

Question 1.
Fill in the blanks :
A girl is swinging on a swing in a sitting position. When she stands up, the period of the swing will______.
Answer:
Decreases

Question 5.
A glass window may be broken by a distant explosion. Why?
Answer:
The sound waves can cause forced vibrations in glass due to difference between frequency of sound wave and natural frequency of glass. This can break the glass window.

Plus One Physics Oscillations Two Mark Questions and Answers

Question 1.
A simple pendulum is transferred from earth to moon. Will it go faster or slower?
Answer:
The value of g at moon is low compared to earth. The decrease in g will increase time period of simple pendulum. Hence pendulum will vibrate slower.

Question 2.
Here five examples of accelerated motion are given in first column. Match each examples given in the second column. 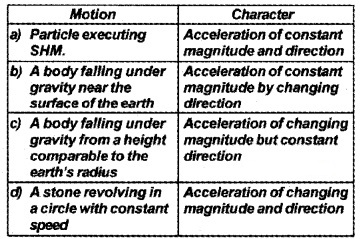 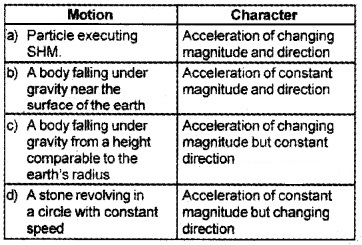 Question 3.
A girl is swinging a swing in sitting position. What shall be the effect of frequency of oscillation if

Answer:
1. If the system is considered a simple pendulum, length of pendulum is reduced as girl stands up.

So frequency of oscillation is increased.

2. The time period and hence frequency of simple pendulum is independent of mass. Hence there is no change in frequency.

Plus One Physics Oscillations Three Mark Questions and Answers 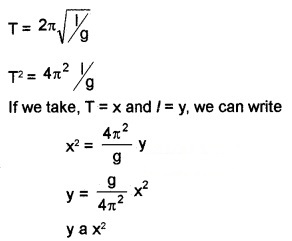 This is the equation parabola. Hence the shape of graph between period(T) and length (l) will be parabola.

Question 2.
A simple pendulum has a bob of mass m is suspended from the ceiling of a lift which is lying at the ground floor of a multistoried building.

Question 3.
A body tied a spherical pot with a string and suspended it on a clamp. He then filled it with water. Length of the string if 90 cm and diameter of the pot is 20 cm. The pot is slightly displaced to one side and leave it to oscillate. Considering the above example as a simple pendulum (g = 9.8 ms-2)

Answer:
1. A periodic motion in which acceleration is directly proportional to displacement but opposite in direction is called SHM. 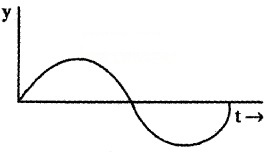 The graphical variation of simple harmonic motion with time given above.

Question 5.
A spring of spring constant ‘k’ is used to suspend a mass ‘m’ at its free end while the other end of the spring is rigidly fixed.

Plus One Physics Oscillations Four Mark Questions and Answers

Question 1.
A simple harmonic motion is represented by x(t) = Acosωt.

Question 4.
A mass m is suspended at one end of a spring and the other end of the spring is firmly fixed on the ceiling. If the mass is slightly depressed and released it will execute oscillation.

3. When spring is cut into half spring constant becomes 2k. Hence frequency, 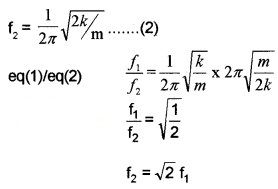 4. If this system is immersed in water, the amplitude of oscillation decrease quickly. Hence system comes to rest quickly.

Question 5.
Starting from the origin, a body oscillates simple harmonically with an amplitude of 2m and a period of 2s.

Answer:
1. The oscillatory motion is said to be simple harmonic motion if the displacement ‘x’ of the particle from the origin varies with time as 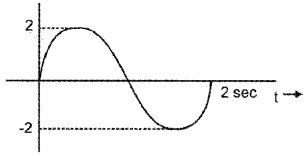 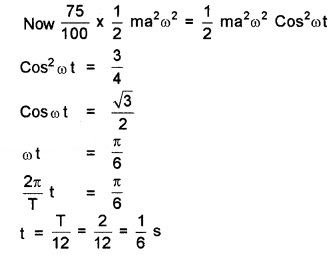 Answer:
1. Spring constant is the force required for unit extension.

Consider a body of mass m attached to a massless spring of spring constant K. The other end of spring is connected to a rigid support as shown in figure. The body is placed on a frictionless horizontal surface.

If the body be displaced towards right through a small distance Y, a restoring force will be developed. 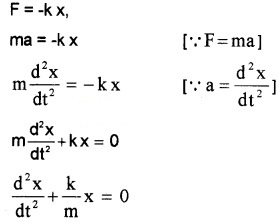 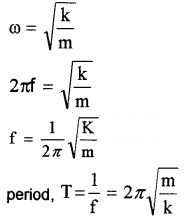 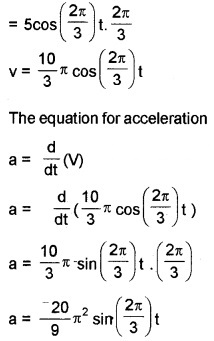 Answer:
1. The force acting simple harmonic motion is proportional to the displacement and is always directed towards the centre of motion. 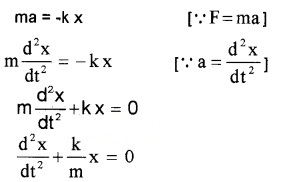 2. A pendulum having period 2 sec is called a seconds pendulum.

Question 9.
SHM is a type of motion in which both speed and acceleration change continuously. 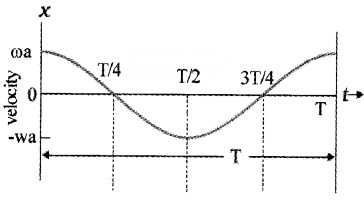 Variation of acceleration with time

4. When a longer spring is locked with weight mg, the extension T is more
∴ T is large, because T = \(2 \pi \sqrt{\frac{l}{g}}\)
So longer spring will have a large value of period.

Question 11.
A simple pendulum consists of a metallic bob suspended from a long straight thread whose one
end is fixed to a rigid support. 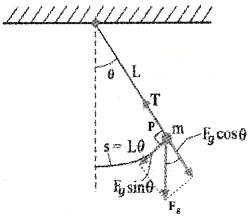 Consider a mass m suspended from one end of a string of length L fixed at the other end as shown in figure. Suppose P is the instantaneous position of the pendulum. At this instant its string makes an angle θ with the vertical.

The forces acting on the bob are (1) weight of bob Fg(mg) acting vertically downward. (2) Tension T in the string.

The gravitational force Fg can be divided into a radial component FgCosθ and tangential component FgSinθ. The tangential component FgSinθ produces a restoring torque.
Restoring torque τ = – Fg sinθ . L
τ = – mg sinθ . L _____(1)
-ve sign shown that the torque and angular displacement θ are oppositely directed. For rotational motion of bob,
τ = Iα ______(2)
Where I is moment of inertia about the point of suspension and α is angular acceleration. From eq (1) and eq (2).
Iα = – mgsinθ . L
If we assume that the displacement θ is small, sinθ ≈ θ
∴ Iα = -mgθ . L
Iα + mgθ L = 0 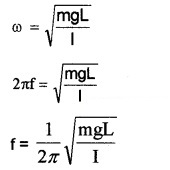 for simple pendulum, I = mL2
Substituting I = mL2 we get

The above equation gives that T is independent of mass.

Plus One Physics Oscillations Five Mark Questions and Answers 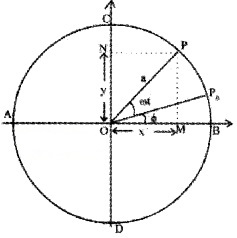 Consider a particle moving along the circumference of a circle of radius ‘a’ and centre O, with uniform angular velocity w. AB and CD are two mutually perpendicular diameters along X and Y axis. At time t = 0.

Question 2.
The spring has a scale that reads from zero to 30 kg. The length of the scale is 30cm. 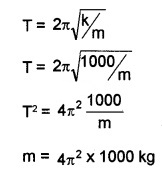 Plus One Physics Oscillations NCERT Questions and Answers

Question 3.
A spring having spring constant 1200Nm-1 is mounted on a horizontal table as shown in the figure. A mass of 3 kg is attached to the free end of the spring. The mass is pulled sideways to a distance of 2.0cm and released.

Question 5.
A circular disc of mass 10kg is suspended by a wire attached to its centre. The wire is twisted by rotating the disc and released. The period of torsional oscillations is found to be 1.5s. The radius of the disc is 15cm. Determine the torsional spring constant of the wire. (Torsional spring constant α is defined by the relation J = -αθ, where J is the restoring couple and θ the angle of twist).
Answer: 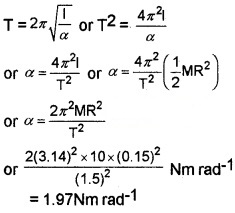 Plus One Physics Chapter Wise Questions and Answers