Question 1.
Who among the following attempted to estimate India’s national income for the pre-independence period.
(i) Dadabhai Navoroji
(ii) V.K.R.V. Rao
(iii) R.C. Desai
(iv) All the above
Answer:
(iv) All the above

Question 8.
At the time of independence, _____ % of population in India engaged in agricultural activities.
Answer:
72%

Question 9.
How many stages are there in theory of demographic transition?
Answer:
Four Stages.

Question 12.
Which of the following factors are true regarding the foreign trade of India under colonial period?
(i) Large export surplus
(ii) Import of commodities like wool, sugar, and indigo to India.
(iii) Light machinery produced in the factories of India.
(iv) Indian trade was dominated with China, Ceylon, and Persia.
Answer:
(i) Large export surplus

Question 2.
Mention the growing regional variation in occupational structure of India under British rule.
Answer:
70 -75 percent of Indian workforce was engaged in agriculture 10 percent in manufacturing and 15-20 percent in services. But parts of the Madras presidency witnessed a fall in the dependence of the workforce on agricultural sector and an increase in manufacturing and service sector.

Question 3.
State whether true or false.

Question 8.
Define economic development.
Answer:
Economic development refers to that process as a result of which, along with increase in real per capita income, there is reduction in inequality, poverty, illiteracy, and disease.

Question 9.
What do you mean by ‘tariff?
Answer:
Tariff is a tax or duty on imports which can be levied either on physical units.

Question 1.
“The traditional handicrafts industries were ruined under the British rule”. Do you agree with this view? Give reasons in support of your answer.
Answer:
Yes. India’s traditional handicraft industries were ruined under British rule. There were many reasons behind this. The British adopted the strategy of systematically de-industrializing India. The main raw materials required by the handicraft industries such as cotton and silk were exported to Britain and instead imported to Indian markets the finished products which are low cost.

Question 2.
Highlight the salient features of India’s pre-independence occupational structure?
Answer:
The distribution of working persons across different industries and sectors is called occupational structure. The agricultural sector accounted for the largest share of workforce. About 72 percent people were engaged in agriculture, 10 percent in manufacturing and 18 percent in service sector.

Question 3.
Mention the objectives of British policies of infrastructure development in India?
Answer:
Basic infrastructure like railways, roads, telegraphs, etc. were developed during British period. The purpose behind this was to satisfy various colonial interests.

Question 4.
Name the states where the following iron and steel industries are located?

Question 5.
What are the major economic challenges of India today?
Answer:

Question 6.
“During British rule land and labour were transformed into commodity”. Justify this statement.
Answer:
Land being the most important income yielding asset in the rural society became a much sought after commodity. The Zamindars, who got land in the British settlement and money lenders who acquires land against their debt, wanted to acquire more and more of it.

All artisans who lost craft and could not be accommodated on land came to town in search of employment. Some of them got employment in factories; some others became coolies and domestic servants. In their case also, labour power became a commodity Thus it can be concluded that during British rule land and labour were transformed into commodity.

Question 7.
What do you understand by the drain of Indian wealth during the colonial rule?
Answer:
The most important feature of India’s foreign trade throughout the colonial period was generation of large export surplus. But this caused scarcity in the domestic market. Further, this export surplus did not result in any flow of gold or silver into India. Rather, this was used to make payments for the expenses incurred by,

All these led to drain of Indian wealth during the colonial period.

Particularly affected was India’s jute industry since almost the whole of the jute producing area became part of East Pakistan (now Bangladesh). India’sjute goods industry (in which the country had enjoyed a world monopoly so far), thus, suffered heavily for lack of raw material. 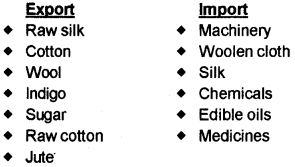 Question 7.
Give an account of the economic policies pursued by the colonial government in India?
Answer:
Since the Britishers had their vested interests in India, that could be seen in the economic policies implimented which meant only to promote their economy at the cost of India’s economy. The impact of the policies resulted into a major change in the structure of the Indian economy:

1. Transformed the country into a net supplier of raw materials and the consumer of the finished industrial products from Britain.

3. No modern industrial base was allowed to come up. The policies meant to systematically deindustrialize the country.

4. India’s world-famous and centuries-old handicraft industry perished due to the policies layed by colonial rule.

5. Due to all the above factors, the level of unemployment increased.

Plus One Economics Chapter Wise Questions and Answers