Question 1.
________ is the main activity carried out in computers
Answer:
Data processing

Question 2.
The data used in computers are different. To differentiate the nature and size of data _____is used.
Answer:
Data types

Question 4.
Sheela wants to store her age. From the following which is the exact data type.
a) void
b) char
c) int
d) double
Answer:
c) int

Question 7.
From the following which data type uses 4 bytes of memory
a) float
b) short
c) char
d) double
Answer:
a) float

Question 11.
Pick a valid variable name from the following
a) 9a
b) float
c)age
d) date of birth
Answer:
c)age

Question 20.
State true or false:
a) Multiplication, division, modulus have equal priority.
b) Logical and (&&) has less priority than logical or ( )
Answer:
a) True
b) False

Question 21.
_____ is composed of operators and operands.
a) expression
b) Key words
Identifier
d) Punctuators
Answer:
a) expression

Question 22.
Supply value to a variable at the time of declaration is known as _____.
Answer:
Initialisation

Question 24.
State True / False
In an expression all the operands having lower size are converted(promoted) to the data type of the highest sized operand.
Answer:
True

Question 26.
Suppose x=5 and y=2 then what will be cout<<(float) x/y
Answer:
2.5 The integer x is converted to float hence the result.

Question 29.
Pick the odd one out
a) structure
b) Array
c) Pointer
d) int
Answer:
d) int, it is fundamental data type the others are derived data types

Question 31.
Consider the following
float x=25.56; cout<<(int)x; Here the data type of the variable is converted. What type of conversion is this?
a) type promotion
b) type” casting
c) implicit conversion
d) None of these
Answer:
b) type casting (explicit conversion)

Question 32.
Identify the error in the following C++ statement and correct it.
Answer:
The maximum number that can store in short type is less than 32767. So to store 68000 we have to use long data type.

Question 33.
Consider the following statements in C++ if(mark>=18)
cout<<“Passed”; ’
else ,
cout<<“Failed”;
Suggest an operator in C++ using which the same , output can be produced.
Answer:
Conditional operator (?:)

Question 1.
Analyses the following .statements and write True or False. Justify
i) There* is an Operator in C++ having no special character in it
ii) An operator cannot have more than 2 operands
iii) Comma operator has the lowest precedence
iv) All logical operators are binary in nature
v) It is not possible to assign the constant 5 to 10 different variables using a single C++ expression
vi) In type promotion the operands with lower data , type will be converted to the highest data type in expression.
Answer:
i) True (size of operator)
ii) False( conditional operator can have 3 operands
iii) True
iv) False
v) False(Multiple assignment is possible,
eg: a=b=c=…..= 5
vi) True

Question 3.
Consider the following statements in C++
1) cout<<41/2;
2) cout<<41/2.0; Are this two statements give same result? Explain?
Answer:
This two statements do not give same results. The first statement 41/2 gives 20 instead of 20.5. The reason is 41 and 2 are integers. If two operands are integers the result must be integer, the real part must be truncated. To get floating result either one of the operand must be float. So the second statement gives 20.5. The reason is 41 is integer but 2.0 is a float.

Question 5.
Is it possible to initialise a variable at the time of execution. What kind of initialisation is this? Give an example
Answer:
Yes it is possible. This is known as Dynamic initialisation.. The example is given below
Eg: int a=10,b=5;
int c=a*b;
here the variable c is declared and initialised with the value 10*5.

Question 6.
Boolean data type is used to store True / False in C++. Is it true? Is there any data type Called Boolean in C++?
Answer:
No there is no data type for storing boolean value true / false.
But in C++ non -zero (either negative or positive) is treated as true and zero is treated as false.

Question 7.
Consider the following
n=-15;
if (n)
cout<<“Hello”;
else
cout<<“hai”;
What will be the output of the above code?
Answer:
The Output is Hello, because n = – 15 a non zero number and it is treated as true hence the result.

Question 9.
char ch;
cout<<“Enter a character”; cin>>ch;
Consider the above code, a user gives 9 to the variable ‘ch’. Is there any problem? Is it valid?
Answer:
There is no problem and it is valid since 9 is a character. Any symbol from the key board is treated as a character.

Question 11.
Write short notes about C++ short hands?
Answer:
x=x + 10 can be represented as x+=10, It is called short hands in C++. It is faster.
This is used with all the arithmetic operators as follows. 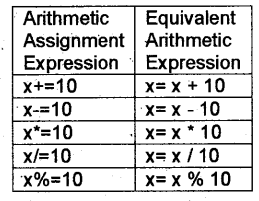 Question 12.
What is the role of ‘const’ modifier? ‘
Answer:
This ‘const’ key word is used to declare a constant, Eg. const int bp=100;
By this the variable bp is treated as constant and cannot be possible to change its value during execution.

Question 22.
Read the following code: charstr[30]; cin>>str;
cout<<str; . If we give the input “Green Computing”, we get the . output “Green”. Why is it so? How can you correct that?
Answer:
The input statement cin>> cannot read the space. It reads the text up to the space, i.e. the delimiter is space. To read the text up to the enter key gets( ) or getline( ) is used 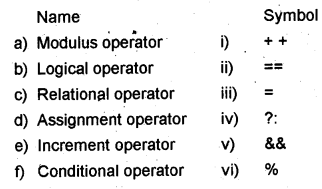 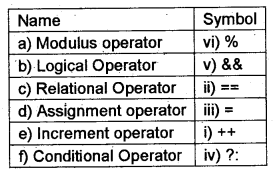 Question 25.
A student wants to insert his name and school address in the C++ program that he has written. But this should not affect the compilation or execution of the program. How is it possible? Give an example.
Answer:
He can use comments to write this information. In C++ comments are used to write information such as programmer’s name, address, objective of the codes etc. in between the actual codes. This is not the part of the programme.
There are two types of comments.
i) Single line (//) and ii) Multi line (/* and */)
i) Single line (//) : Comment is used to make a single line as a comment. It starts with //.
Eg : //programme starts here.
ii) Multi line (/* and */): To make multiple lines as a comment. It starts with /* and ends with */.
Eg : !* this programme is used to find sum of two numbers.*/

Question 26.
Consider the following C++ statements :
char word (20]
cin>>word;
coUt<<word; gets(word); puts(word); If the string entered is “HAPPY NEW YEAR”, predict the output and justify your answer.
Answer:
cin>>word;
cout<<word;
It displays “HAPPY” because cin takes characters upto the space. That is space is the delimiter for cin. The string after space is truncated. To resolve this use gets ( ) function. Because gets ( ) function reads character upto the enter key.
Hence gets (word);
puts (word);
Displays “HAPPY NEW YEAR”

Question 27.
Write the difference between x = 5 and x ==5 in C++.
Answer:
x = 5 means the value 5 of the RHs is assigned to the LHS variable x . Here = is the assignment operator. But x ==5, ==this is the relational (comparison) operator. Here it checks whether the value of RHS is equal to the value of LHS and this expression returns a boolean value as a result. It is the equality operation.

Question 1.
In a panchayath or municipality all the houses have a house number, house name and members. Similar situation is in the case of memory.Explain Answer: The named memory locations are called variable. A variable has three important things 1) variable name : A variable should have a name 2) Memory address : Each and every byte of memory has an address, it is also called location (L) value 3) Content: The value stored in a variable is called content. It is also called Read(R) value.

Question 3.
Consider the following statements int a=10,x=20; float b=49000.34,y=56.78; i) a=b; ii) y=x; Is there any problem for the above statements? What do you mean by type compatibility?
Answer:
Assignment operator is used to assign the value of RHS to LHS. Following are the two chances

v) void data type :- void means nothing. It is used to represent a function returns nothing.

Question 7.
Write valid reasons after reading the following statements in C++ arid comment on their correctness by give reasons.
i) char num=66;
char num =’B’;
ii) 35 and 35L are different
iii) The number 14,016 and OxE are one and the same
iv) Char data type is often said to be an integer type.
v) To store the value 4.15 float data type is preferred over double
Answer:
i) The ASCII number of B is 66. So it is equivalent.
ii) 35 is of integer type but 35L is Long
iii) The decimal number 14 is represented in octal is 016 and in hexadecimal is OxE.
iv) Internally char data type stores ASCII numbers.
v) To store the value 4.15 float data type is better because float requires only 4 bytes while double needs 8 bytes hence we can save the memory.

Question 8.
Suggest most suitable derived data types in C++ for storing the following data items or statements :
rived data type
i) Age of 50 students in a class
ii) Address of a memory variable’
iii) A set of instructions to find out the factorial of a number
iv) An alternate name of a previously defined variable
v) Price of 100 products in a consumer store
vi) Name of a student
Answer:
i) Integer array of size 50
ii) Pointer variable
iii) Function
iv) Reference
v) Float array of size 100
vi) Character array

Question 11.
b) Explain the data types in C++
Answer:
Fundamental data types: It is also called built in data type. They are int, char, float, double and void
i) int data type: It is-used to store whole numbers without fractional (decimal point) part. It can be either negative or positive. It consumes 4 bytes (32 bits) of memory.i.e. 232 numbers. That is 231 negative numbers and 231 positive numbers (0 is considered as +ve) So a total of 2 numbers. We can store a number in between -231 to + 2311. 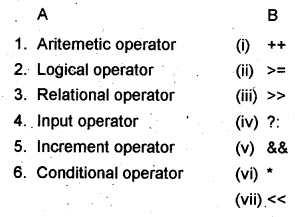 Consider the above data, we know that there are different types of data are used in the computer. Explain different data types used in C++.
Answer:
i) int data type: It is used to store whole numbers without fractional (decimal point) part. It can be either negative or positive. It consumes 4 bytes (32 bits) of memory.i.e. 232 numbers. That is 231 negative numbers and 231 positive numbers (0 is considered as +ve) So a total of 232 numbers. We can store a number in between -231 to + 2311.

v) void data type : void means nothing. It is used to represent a function returns nothing.

Question 2.
Define an operator and explain operator in detail.
Answer:
An operator is a symbol that performs an operation. The data on which operations are carried out are called operands. Following are the operators
1) lnput(>>) and output(<<) operators are used to perform input and output operation. Eg. cin>>n;
cout<<n;
2) Arithmetic operators: It is a binary operator. It is used to perform addition(+), subtractionf-), division (/), multiplication (*) and modulus (%- gives the remainder) operations.
Eg. If x=10 and y=3 then

x/y = 3, because both operands are integer, “to get the floating point result one of the operand must be float.
3) Relational operator: It is also a binary opera- tor. It is used to perform comparison or relational operation between two values and it gives either true(1) px false(O). The operators are <,<=,>,>=,== (equallty)and !=(not equal to)
Eg. If x-10 and y=3 then

4) Logical operators : Here AND(&&), OR(||) are binary operators and NOT(!) is a unary operator. It is used to combine relational operation? and it gives either true(1) or false(O).
If x=True and y=False then

5) Conditional operator: It is a ternary operator hence it needs three operands. The operator is?:. Syntax: expression ? value if true : value if false. First evaluates the expression if it is true the second part wilt be executed otherwise the third part will be executed.
Eg. If x=10 and y=3 then x>y ? cout< Here the output is 10.

6) sizeof( ): This operator is used to find the size used by each data type.
Eg. sizeof(int) gives 2.

7) Increment and decrement operator:  These are unary operators.

8) Assignment operator (=) : lt is used to assign the value of a right side to the left side variable.eg. x=5; Here the value 5 is assigned, to the variable x.

Plus One Computer Application Chapter Wise Questions and Answers